Wondering which are the best Mariano Rivera rookie cards to chase? Take a look at some of the most popular options here. 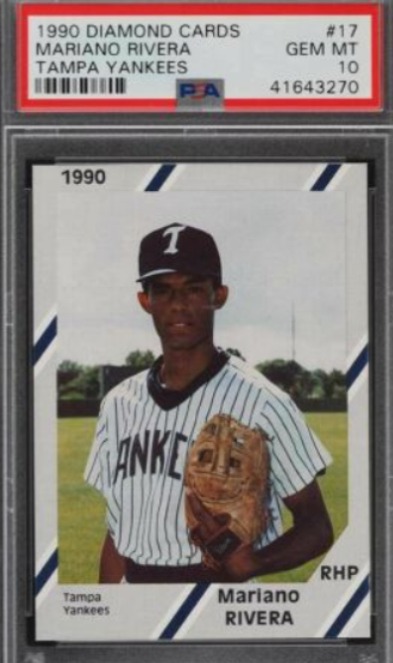 Starting with the earliest Mariano Rivera card, the 1990 Diamond Cards is a truly historic one. On it, you’ll find a scrawny Mariano Rivera just fresh out of his teens, and drafted by the Tampa Yankees, a Minor League affiliate of the New York Yankees. This one’s the best pre-rookie card for you to consider.

Interestingly, his slim frame made some scouts dubious that he would ever succeed with the Yankees. He wasn’t considered a top prospect, but rather someone who can perhaps make it as a fringe player. But he soon proved everyone wrong by having a stellar first season in the Minor League.

This card is one of the most sought-after Rivera cards because it was only attainable through a Tampa Yankees set that only featured players from this team. But some collectors are still not aware of this card, while others covet it highly.

The price of the card can fluctuate anywhere between several hundred dollars to several thousand. This means that it’s perhaps the most valuable Rivera card currently on the market. 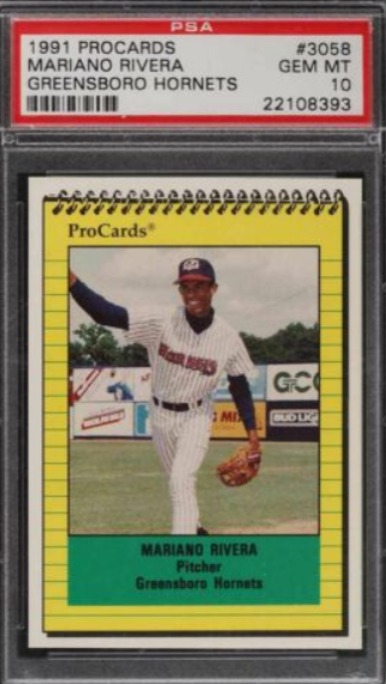 In 1991, Rivera progressed as a player and was promoted to Class A, where he fielded for the Greensboro Hornets. At this stage of his career, Rivera was starting to make a name for himself. Even the naysayers started believing that he had a future in the MLB. That’s why the card has some significance in terms of Rivera’s career.

Perhaps the most notable feature of this card is its layout. It has a notepad-like design which some might find disturbing. The overall look of the card is not the best, to be honest. But despite that, the card still sells well and remains popular to this day.

It’s a bit unique and perhaps even a bit niche, so it’s not the most expensive card on the list. It’s accessible to almost anyone, but it’s still worth mentioning because of its historical significance and its peculiar design. 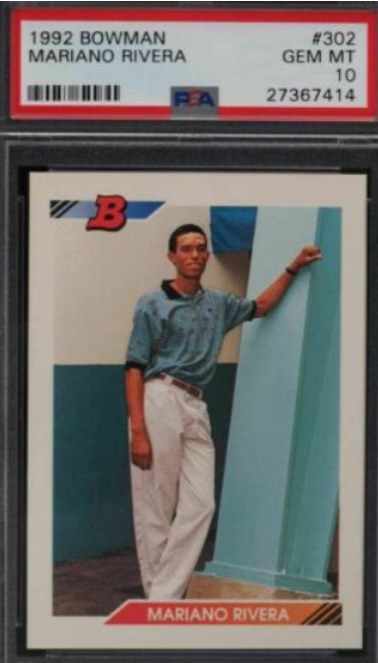 The 1992 Bowman set is one of the most well-known sets in the baseball card collecting world. It has many different stars inside, and Mariano Rivera is one of them, which is one of the earliest known Rivera cards. It’s also the official rookie card of this player.

The beauty of this card is that it’s widely available, and not that expensive either. You will like it if you’re a big Rivera fan and you want to get a card from his early career. Ungraded cards can go for real cheap, as they might struggle to reach the mark of a hundred dollars. Graded cards can be a bit more expensive, but still well within the budget option.

The card itself is as casual as they get. Mariano Rivera poses on the card in his casual apparel, which is quite unusual for baseball cards. Also, the design of the card is simple and not intrusive, which some people will like, while those who like more flashy cards might not find it attractive. 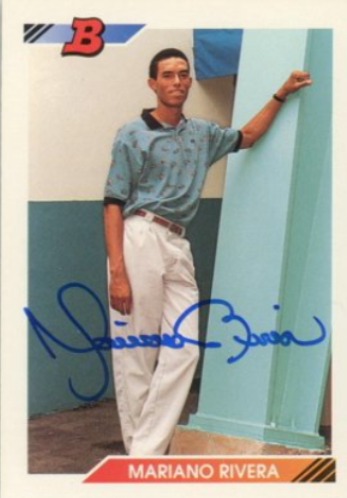 Certified 1992 Bowman cards are a bit hard to get, but also some of the most expensive Rivera cards on the market. Initially, these cards were near impossible to get, especially in the 1990s and the 2000s, but they’re a bit more widely available now, and you might be able to pick one up for a sensible price, too.

The problem with these cards is that it’s hard to estimate the authenticity of the signature, so unless they’re graded and officially certified, be very wary of them. These cards are constantly added to the marketplace as the player keeps signing them, so there might be some funky additions to the signatures, too.

You might find some legendary autographs if you’re lucky such as “Enter Sandman” but only god knows how many of these will pop up in the years to come. Go for the graded cards in this instance rather than buying ungraded ones because those are the ones that tend to be certified. 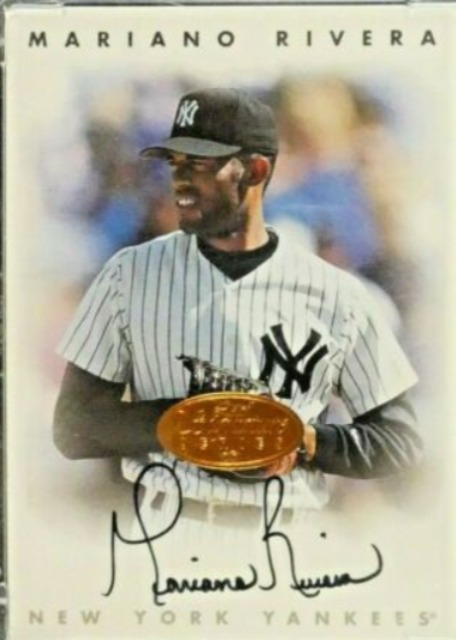 The 1996 Leaf Signature Mariano Rivera is among the most popular cards of this player. If you want an MLB card, then this one’s one of the earliest ones of Mariano Rivera. It’s also his first autograph card, as it came in the Leaf Signature set that practically guaranteed you to get an autographed card.

This is the only card from Rivera’s rookie season to have his certified signature on it. This factor alone contributes to its popularity, but it’s also the fact that it comes from his first full season in MLB. So get it if you want his MLB rookie card.

The card has three different variations: Bronze, Silver, and Gold. The bronze one is the most opulent with 3500 copies, while the gold one only has 500 copies. The main difference between the cards is the medallion on the front of the card – other than that, they’re largely the same.

The bronze version of this card is for casual collectors on a budget, while the gold card is a bit more challenging to find. You might have to spend a bit more for the gold card, while the silver one can cost several hundred dollars. 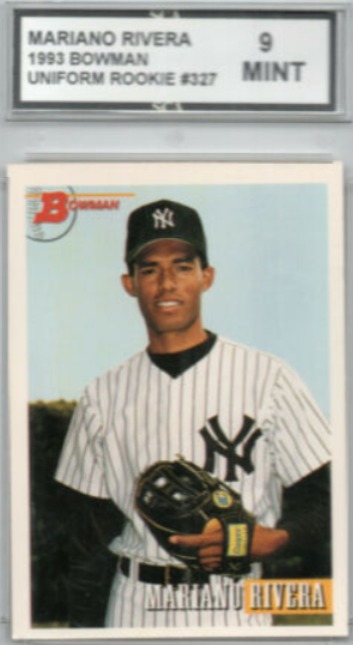 This one’s the natural successor to the 1992 Bowman card, which is his true rookie card. If you look at the card, it’s a bit different than 1991 one. The most notable difference is the image, where Rivera wears the NY Yankees jersey for the first time on a card.

It still has that minimalistic look, which is what you’d expect from Bowman cards from the 90s. Now, it’s not as popular nor is it as valuable as the 1992 card, so it’s a bit easier to get perhaps. Note that you might not find many graded cards online, so you may go for ungraded ones that are cheap.

It’s one that’s worth mentioning at least because it’s from his early stage in his career where he was still playing in the Minor Leagues. This year was a bit different from 1992, as many coaches started to doubt Rivera’s performances in the Minor League and started to question his talent. But in the end, he proved them wrong again.

If you really want a signed Rivera card but the 1996 Leaf Signatures one is too expensive for you, look no further than the 1998 Donruss Signatures Mariano Rivera card. Originally, the card had three color variations: red, blue, and green. The green one is the most common with 1000 copies, while the blue one is the rarest with only 100.

Rivera became an important player in 1998 for the Yankees. He became central to what they did and helped them to succeed on the field. He also started to develop his powerful throw, which became a nightmare for every batter in the league. His powerful throw is nicely depicted on this 1998 card.

Every autograph card you can get of Rivera is a bonus, and it’s always nice to add a card like this to your collection. It will never fail, because people will always be looking to get an autographed card of Rivera, and this one is among the first ones the pitcher has signed.

You have some variety with this card. If you are on a budget and you’re looking for a cheap way to get a Rivera signed card, then you can opt for the green or the red one. But if you want something a bit rarer, then go for the blue one.

The difference between the three is in the color of the background, compared to the Leaf Signatures cards where you wouldn’t be able to tell the difference if there were no medallions. 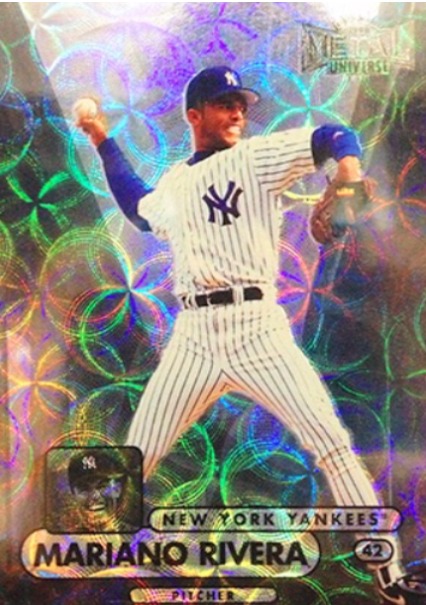 If you’re a baseball card collector, then you might not have seen a card from this specific company. That’s because Metal Universe tends to make basketball cards rather than baseball cards. Nonetheless, this card can be an intriguing addition to your Rivera collection.

For the 1990s, the Metal Universe card was a bit unique in terms of design. It’s certainly more flashy than most other cards you’ll find of Rivera. But you may have a difficulty finding this one because it’s mostly a part of personal collectors, so it can command quite a high fee.

Parallels are also available with this card, but they’re even rarer. For example, the Platinum Gold version of the card is near impossible to find, as it had only 30 original copies to its name. 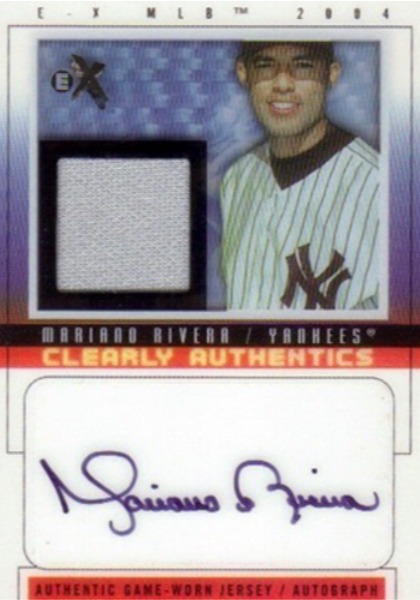 The E-X Clearly Authentics signature card of Rivera is one of the rare instances that featured Rivera’s signature. With the official run of 50 cards, this one is a rare find. Interestingly though, it might just be one of the easiest autograph cards of Rivera that you will be able to find.

Similar cards like this one had much lower quantities – most of them were limited to 10 copies, for instance. So if you’re a Mariano Rivera fan, that’s good news. It’s a matter of personal preference, but this might be one of the classiest looking Rivera cards out there.

It has everything you’d expect from a complete card. It has Rivera’s image, his autograph, and a patch of his match-worn jersey. Prices will vary, although they shouldn’t cripple your budget as they’re available for mid-tier collectors and maybe even for entry-level collectors. 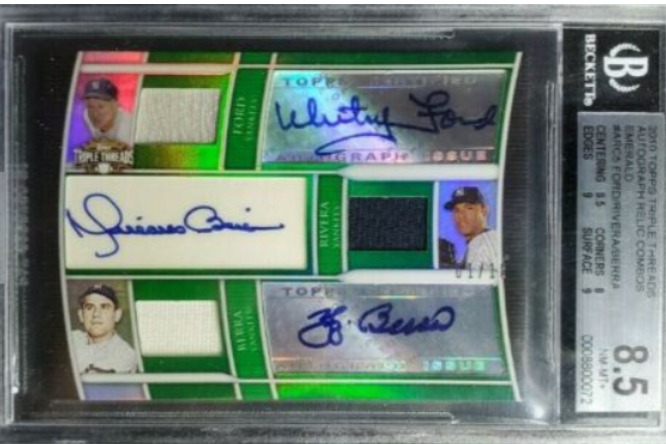 Sure, this card may not win many awards in terms of design, but it’s a card that should be close to the heart of Yankee fans. The main thing that shows the strength of the card is its autographs – it features autographs from three of the largest legends of the Yankees – next to Rivera, the card features Ford and Berra.

It’s also worth noting that there are only 36 instances of this card, and it’s a case of first come, first served here. Unless you’re lucky, you might not even be able to find it in an auction. But the good news here is that there are several parallels for you to consider with this card.

Yogi Berra and Whitey Ford are both legendary players for the Yankees, so this card has extra sentimental value for those who love those Yankee legends. While the pairing might be a bit unusual, it’s definitely nice to have a card that celebrates all of the above-mentioned players at the same time.

You’ll probably find the Topps Diamond Anniversary Rivera card much easier to get than the autographed version. But they’re quite different, not just in terms of the autograph, but also in terms of overall look.

With the autographed version, you’ll get a really elegant card. One thing that stands out is the silver autograph, which is much different to most other autographs with stickers. The card is numbered to 60 prints, and it was a part of the pack that celebrated Topps’ anniversary – they celebrated 60 years of card making.

Another interesting thing to note here is the inscription written by Rivera, which says: “Happy 60th”. He actually has very handsome handwriting! But on a more serious note, you may not be able to find this card as collectors generally keep this one for themselves. It’s a nice card to have if you’re a Rivera fan or if you generally love Topps as a card company.