Chipper Jones rookie cards are some of the most popular rookie cards in the baseball card collecting world. And considering how great a player Chipper was, there’s no real surprise about that.

He was known as one of the best switch hitters in history, being the only switch hitter with a record of over .300 and also having more than 400 home runs.

Today, you might have seen (or heard) Chipper as a co-commentator for ESPN, but his rookie cards still remain popular.

And with card prices constantly on the rise, you shouldn’t be surprised to see these cards become more valuable with time. If you’re looking for a good Chipper Jones rookie card, then read on and make your pick. 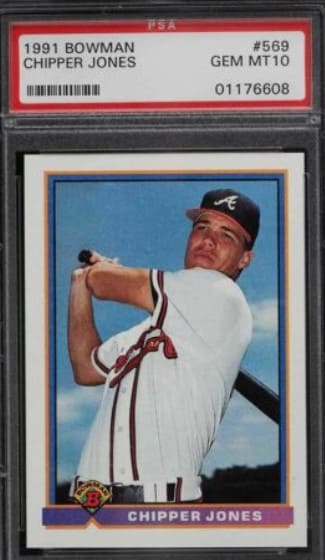 Coming in at number one we have the 1991 Bowman Chipper Jones rookie card. This is easily the most recognizable rookie card of Chipper Jones, as it gives us a flashback of the good old 1950s and 1960s cards.

Even though this card is fairly recent, it has that classic feel to it which means the card is bound to age like fine wine.

Some collectors and analysts have even compared this card to Mickey Mantle’s rookie card – the main point of comparison is the image where Chipper takes a similar pose to Mickey on the card.

This card has that cliché baseball look that just never gets old, and if you appreciate Chipper Jones and his career, this should be one of the first cards to consider if you’re looking to invest or simply add to your collection.

Speaking of Topps baseball cards, one of the more popular cards of this type from the 1990s was Chipper’s Topps card.

While Topps cards are normally found near the top of the pile when it comes to card prices, this time that’s not the case.

In fact, this is one of the least expensive rookie cards that use the same design, because there are a few other cards that also use the exact same design, but are just branded differently.

For example, here’s the O-Pee-Chee Chipper Jones rookie card that looks the same: 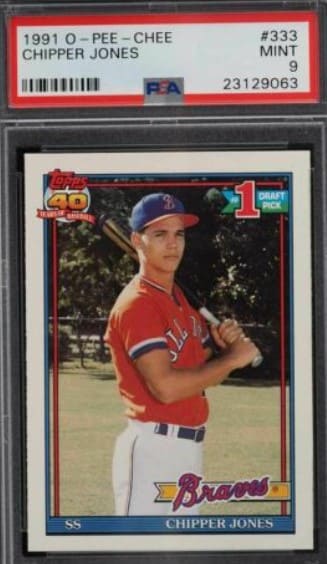 They’re exactly the same, but they’re made by a different card brand.

If you follow baseball cards more closely – especially from the 90s, then you probably know by now that O-Pee-Chee cards were made for the Canadian market and they often borrowed the design from Topps cards that were meant for the US market.

One of the main differences between the two is the card stock.

It appears slightly brighter on the O-Pee-Chee card, although the Topps card stock is believed to be a bit more durable.

Also, the back of the card has a bilingual translation on the Canadian card, while on the Topps card, you’ll only find an English description. As for the prices, they seem to have similar values, and in the end, it might come down to your personal preference.

There are three other variations of the Chipper Jones Topps cards that we must talk about, and these include:

Now, the Topps Micro card is essentially the same card as the base 1991 Topps card, just with the difference that it’s – well, a micro card. The measurements for the Micro card are 1 by 1 ⅜ inches, which looks almost like a postage stamp. 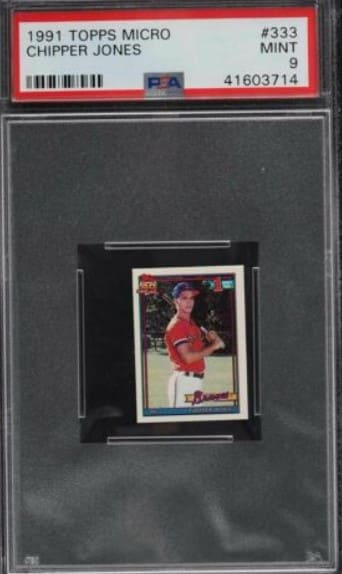 Topps Tiffany, on the other hand, is the premium version of the base card. Before parallels and many different and colorful card variations, the only “parallels” were often these cards that looked exactly the same as the base card, just of a much better quality. 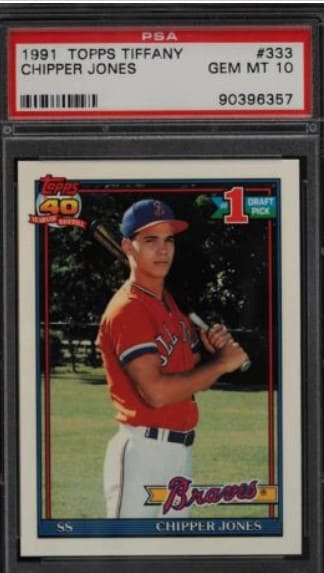 You can consider the Topps Tiffany card as the premium variation of the card, but it’s also a bit more expensive than the base card.

In fact, the prices for this card will often go well into four figures, especially for the best rated cards like the one you see on the image. Visually, there’s not much difference between the Tiffany card and the base one, but if you could take it into your hands, I guarantee that you would be able to tell immediately which is the Tiffany card.

The quality card stock enables the Tiffany cards to age better, which means that there will be more higher graded cards of this type, resulting in slightly higher prices.

It’s also a sound investment for the future because with Tiffany cards, you can be sure that they won’t start developing any issues that older cards develop, so this card is a keeper if you’re willing to let it age nicely.

The last card that we need to mention here is the Topps Desert Shield card. 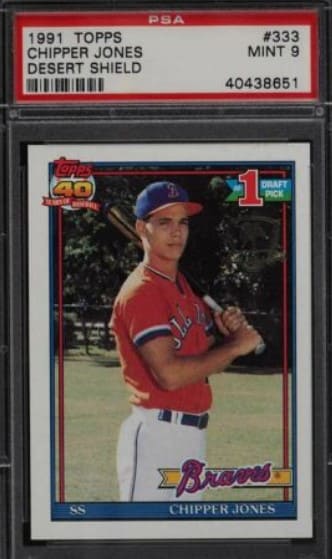 Now, there’s a special story behind this card.

These cards were made for soldiers that were fighting in Iraq back in 1991, which is why it is named “Desert Shield”. Obviously, there’s a limited print run to these cards and not all of them reached the final destination.

The cards that have remained until today are some of the most expensive baseball cards from the 90s. While it might be a bit hard to get because of the higher prices and a lot of interest from collectors, you will probably find a variety of listings for this card. 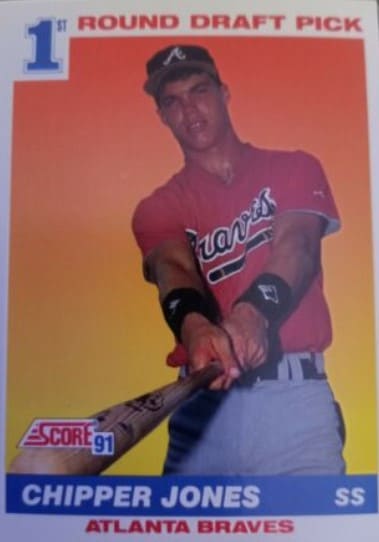 The 1991 Score Chipper Jones rookie card might be an excellent option if you want a simple card that won’t cost a premium.

Its gold-orange background is the distinguishing feature of the card, while the close-up image of Chipper Jones and his bat stands out nicely on the colorful background.

The overall card design is not the most detailed, but Score has decided to keep it simple for this card which has worked quite well for the 1991 Chipper Jones card. I think it goes quite well together with his Braves outfit and the overall look of the card.

The only problem was that these were produced on a massive scale, which caused the prices to plummet.

While the prices have recovered a bit until today, they’re still not anywhere near what they would have been if there weren’t so many of these sold. 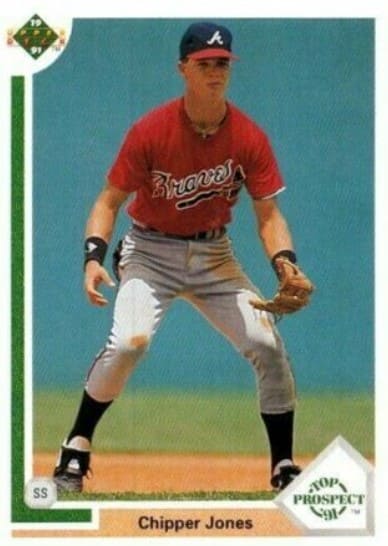 The Upper Deck Chipper Jones card is perhaps the best card you can go for in terms of quality, but that doesn’t necessarily translate into higher prices.

In fact, you’ll find many listings for this card with much lower prices than that of Bowman or Topps.

The thing is that again, there were many of these cards sold initially, which meant that the prices were always going to be lower than for other cards that had a more limited print run, like the Topps Tiffany or Topps Desert Shield cards.

A more detailed look at the card reveals a pretty simple design with a nice action shot of a young Chipper Jones in the middle.

Back in 1991, Upper Deck was still a relatively small and young company compared to Topps. Their official launch was in 1989, and the main goal of Upper Deck cards was always to produce cards of higher quality as compared to other card brands.

So part of the reason why these cards were not as expensive is that Upper Deck wasn’t as established at launch of this card as some other card companies that produced Chipper Jones rookie cards. 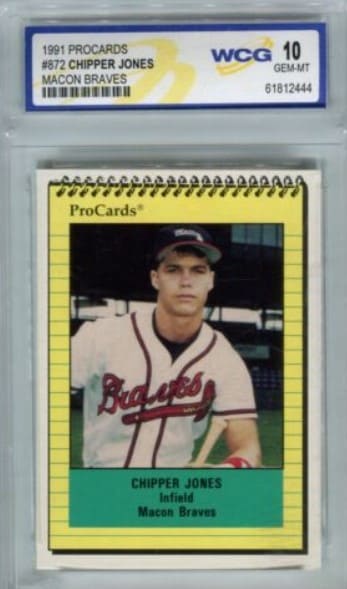 Even though the ProCards card is considered to be a rookie card, it features a young Chipper Jones in his Macon Braves outfit.

For this reason, this card was not as popular as the other cards that already had Chipper in his Atlanta Braves apparel.

The distinct feature of ProCards was the yellow background with a notebook-like feel. These cards also featured portraits of players instead of action images, which might be better for some collectors.

Overall, this is not one of the most popular Chipper Jones rookie cards but it’s still a decent choice if you want a simple card that won’t require a big investment. It’s one for collectors rather than for making profits on it.

That’s about it when it comes to Chipper Jones rookie cards, but there were some cards made from his minor league days that might pique your interest. 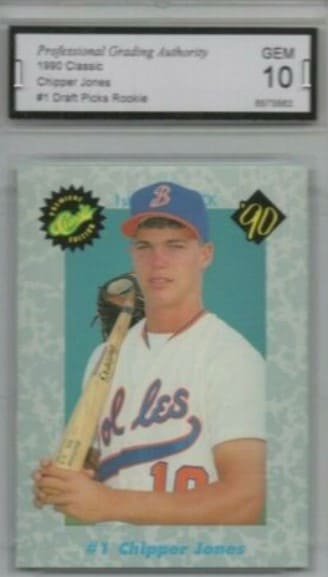 The Classic Draft Picks cards featured players that were recently drafted by MLB teams, and considering that Chipper Jones was the first overall pick in 1990, it’s only appropriate that he was featured on the first card in the 1990 Classic set.

Sure, it might not be the most appealing card to look at, but it certainly has a strong 90s feel to it.

Plus, it comes from a very early part of Chipper Jones’ career, which will interest the true Chipper Jones fans and those who appreciate his career. The good news is that it’s not among the most expensive cards, so you might be able to get it for a good price. 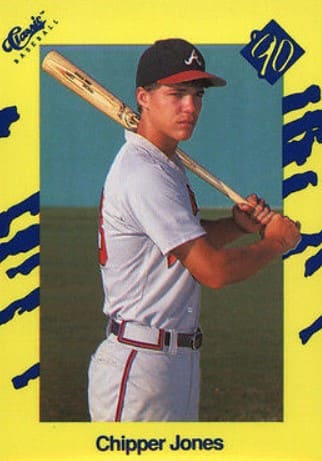 We’ve already featured one Chipper Jones card from Classic, but this yellow line of cards was produced as the third set released back in 1990, and it featured some of the most popular players at that time.

The main feature of this card is the fact that it comes from a very early part of Jones’ career.

Other than that, there’s not that much else that makes it stand out. Maybe it’s worth mentioning the yellow border, which makes this card a bit more shiny and perhaps it stands out from the crowd a bit more for that fact.

It’s easily available and not very expensive, either, so it’s a great choice if you want a very early Chipper Jones card.

What Is Chipper Jones Rookie Card Worth?

The values of Chipper Jones rookie cards will vary anywhere between $15 and $1000 and even higher.

Most mainstream rookie cards like the Bowman cards or Topps cards will cost several hundred dollars, while the rarer variants like Topps Tiffany or Topps Desert Shield might cost $1000 and potentially much more if they are found in top conditions.

What Is the Most Valuable 1991 Topps Baseball Card?

Ken Griffey Jr, Nolan Ryan, and Chipper Jones cards are among the most valuable cards from the 1991 Topps set. Other cards that come from the same set that are also worth a mention include Mark Whiten and Don Mattingly.

However, Chipper Jones’ card from 1991 is perhaps the most valuable rookie card from the 1991 Topps set.

Even though Chipper Jones was already drafted in 1990, he didn’t make his debut for the Braves until the 1991 season, which is when most of these rookie cards started being produced.

However, you’ll also find some cards from earlier, especially those cards that feature Chipper Jones as a part of the 1990 draft when he was drafted as the number one overall pick by the Atlanta Braves.

Chipper Jones is today known as one of the best hitters in MLB history. His famous record still stands today, which is why he’s still remembered fondly by many baseball fans, especially Atlanta Braves fans.

The great thing about Chipper Jones rookie cards is that the base cards are pretty inexpensive, making them easy to collect. However, there are also some premium choices that might cost slightly more.

There are many choices, so take a look at the best Chipper Jones rookie cards and make your pick!