Magic the Gathering is the father of all the card games we know today. But even though it’s the original card game that started it all, many players still swear by it. Today, it has millions of active players searching for the next Holy Grail card of this game.

If you’re like that, these are the best rare Magic the Gathering cards you should be looking at. 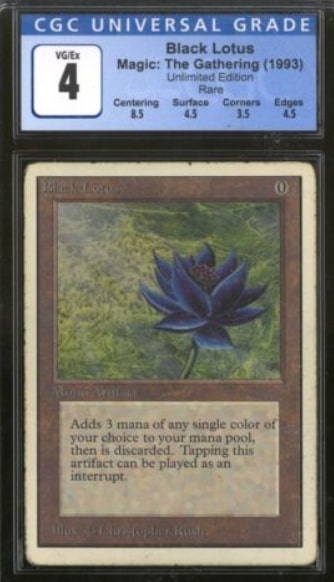 However, this card is as rare as hens’ teeth. First, because it’s a really powerful card. It adds 3 mana to any single color of your choice. At the same time, it can be played as an interrupt. It’s fair to say that this single card can turn the game on its head.

Black Lotus was designed by Christopher Rush, and was initially just a rare card that players wanted to have in their deck. Today, this card can be your ticket to your savings on your bank account. It can cost anywhere from at least $10.000 mark for the lower graded cards, and all the way up to several hundred thousand for better graded cards.

Whether you want to have this card in your deck or you just want to invest in it, go for it, but you’ll need to splash your cash! 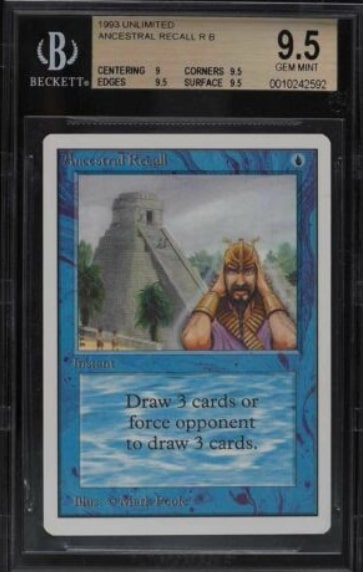 Ancestral Recall is the next most valuable Magic the Gathering card. The primary goal of this card is to turn the tide of the game completely, as it forces the opponent to draw 3 cards, while it allows you to draw 3 as well. It’s one of the most powerful cards in the game.

One of the most appealing things about this card is its design. The artist of this card, Mark Poole, used Mayan imagery to complete the look of this card that complements its name. And add the fact that it’s not easily available in your local grocery store, you’ve got a winning combination for an expensive card.

Ancestral Recall sits comfortably behind Black Lotus on the list of the most rare Magic the Gathering cards. It’s certainly not as rare or expensive as Black Lotus, but it’s no slouch – this one will cost you several thousand dollars to get, depending on the state of the card and its grade. 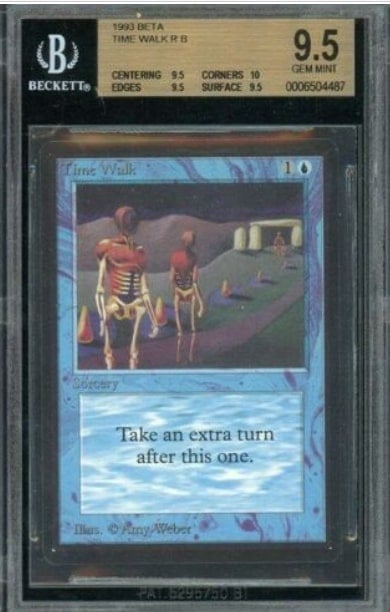 Time Walk might not be as rare as Black Lotus or Ancestral Recall, but it’s still a strong card to own. It gives you the ability to stop the card in its tracks and give you another turn before your opponent can play. This can be huge in a game of Magic the Gathering, as it gives you the chance to inflict even more damage on the opponent.

The ability to stop time in MTG is massive and if you just want this card for your deck, it’s easily one of the best cards to get.

In terms of value, this card will cost at least a few thousand dollars, but significantly more if the card is in tip-top shape. A BGS 9.5 like this can command a price that’s well into the five-figure territory. 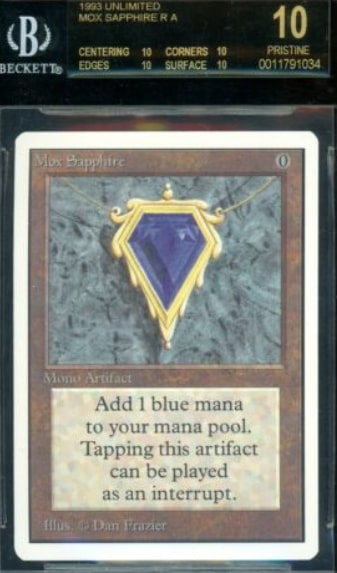 The Mox Sapphire card is truly a gem for MTG card owners. It’s one of those cards that everyone needs to have in their stack, as it adds 1 blue mana to the player’s mana pool. It also acts as an interrupt if the player decides to tap onto the artifact.

It’s fair to say that not everyone can afford it, though. This is arguably the most valuable and rare of all the artifacts that you can own, although there are some great alternatives in this department. Each of them will add different types of mana to your mana pool, although this blue Mox Sapphire gets valued the most.

You may also decide for different colored Mox cards, but we’ve decided to focus on Mox Sapphire since it is the most expensive. There’s also Mox Ruby (red mana), Mox Emerald (green), Mox Pearl (white), and Mox Jet (black). This thing will cost you anywhere between a few thousand dollars to up to several dozen thousand if the card is in the right condition.

The card was designed by Dan Frazier, who is the artist behind all of the Mox cards you can get. As you’ll see each Mox has a different color and shape, so each card has its own charm to go with the in-game value they present. 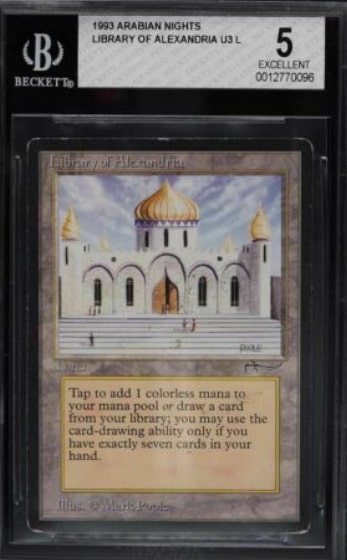 Again, the Library of Alexandria has huge potential to change the course of a game. It can be used to add one colorless mana to your mana pool, as well as draw one additional card if you have seven cards in your hands currently.

The card comes from the 1993 Arabian Nights set and is today fabled for its design as well as its game-changing ability. This card was designed and drawn by Mark Poole, who really managed to bring that Arabian flavor to the game of MTG.

If you’re looking to add this card to your set, you can’t go wrong with it. Alternatively, if you own this card and you’re looking to sell it on, then it’s worth getting it graded and checked professionally before you decide to sell. If your card is in good shape, there’s a good chance that you might be able to fetch at least a few thousand bucks for it.

6. The Tabernacle at Pendrell Vale 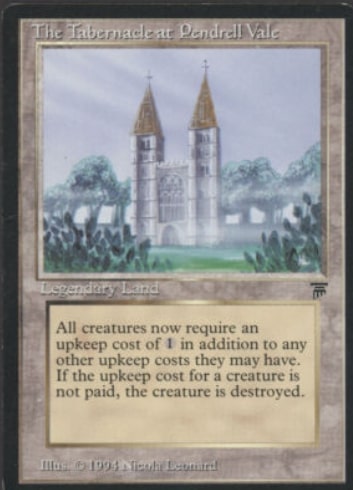 As opposed to the Library of Alexandria, the Tabernacle at Pendrell Vale has a more medieval feel to it. This card actually comes from 1994 when MTG was already an established card game, and it has massive potential to change the course of a game.

Basically, it forces your opponent not to play to their deck’s strength, as it forces them to spend mana for upkeep costs. Ultimately, this prevents them from using their abilities since they’ll have to use more mana to upkeep their existing creatures. This can have big implications on a game of MTG.

The artist of this card was Nicola Leonard, who designed the Tabernacle with a slight mist in front of it, giving it a certain degree of mystique. The prices of this card can vary significantly, but a general rule that graded cards should not go for less than a few thousand dollars. 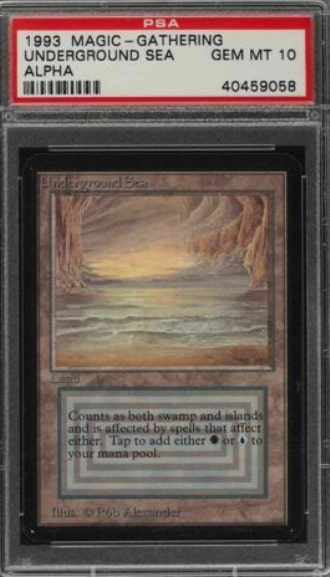 Underground Sea is one of those legendary cards that every MTG card player should know about. This card is a land card, which means it doesn’t cost mana and can be considered a supplementation card.

It counts as both swamp and islands, and it can be tapped to add mana to your mana pool. It’s an important card to own, but also quite rare. It’s essentially an unlocker card that makes cards like Ancestral Recall more powerful.

The trouble with getting this card seems to be that there are not many graded cards on the marketplace. You’ll find many different ungraded cards which can be a double-edged sword – on the one hand, you can’t be really sure about its quality until you see it first-hand, on the other hand, you might find some really nice bargains for it. 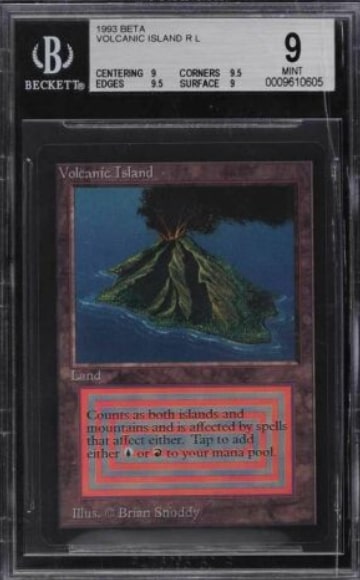 This card is hugely popular because it fits so well with fire decks. There’s also a limited amount of these cards on the marketplace, which both increases the price of such a card. It will cost several thousand dollars and potentially into five figures if it’s in top shape.

It’s also pretty to look at. Brian Snoddy perfectly manages to capture the elements and how they come together on this card, and really makes it feel powerful, even though it is only a land card. 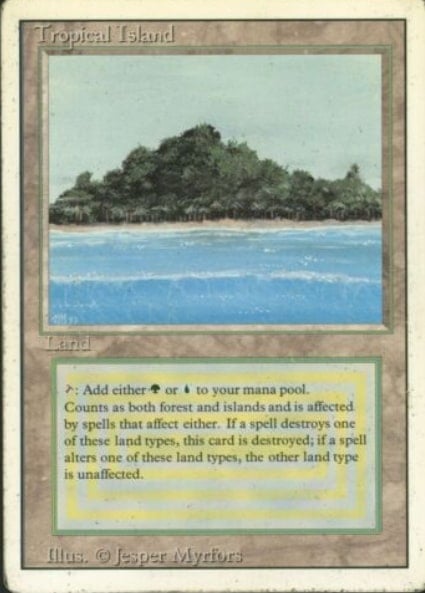 Tropical Island is also a great rare card to have. Even though it’s not as expensive as some other rare cards we’ve mentioned so far, it can be an extremely valuable card to own. It seems as though this might be an unassuming card to have based on its looks, but then again, looks can be deceiving.

It counts as both forest and islands, and it’s mostly used to generate more mana for your mana pool. If you own this card, you’ll probably never run out of mana, which can make your entire deck more powerful as you unlock its potential.

Again, this card is not as expensive as some other cards we’ve just seen, but it can still be worth several thousand dollars if it’s graded. If you play a mixture of green and blue cards, this is one of those cards that you simply must own.

There’s plenty of great places to buy Magic The Gathering cards – local card shops, shows, and marketplaces. However, the easiest and fastest way to buy a range of cards is eBay.