On my blog, I’ve covered many different two-sport players and their cards like Bo Jackson, but perhaps none of them come close to Deion Sanders in terms of their fame.

Today, you might often find him in the analyst role for some of the largest television networks in the US, but in his prime, he was one of the finest two-sport players the world has ever seen.

This also means that Deion Sanders will have rookie cards both for baseball and American football… which is great if you love collecting one or the other (or both)!

I’ve arranged the best Deion Sanders rookie cards according to the sports he played.

As a football player, Sanders began his career with the Atlanta Falcons in 1989, so his rookie cards will be from that year. 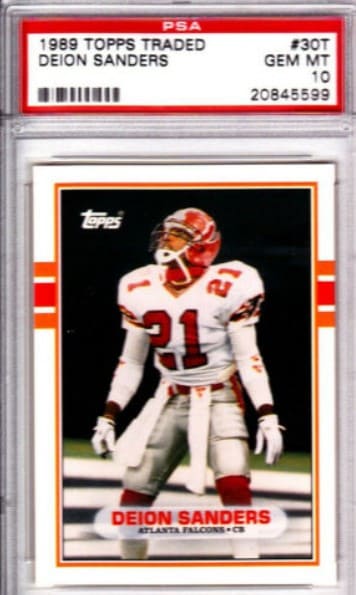 It still has that 80s feel with the Topps design, which is a bit more geometrical with the three stripes on each side of the image, and a square orange border around the image.

The image itself is also quality, as it shows Deion Sanders in action in what was his first season with the Falcons.

I’m a bit disappointed by the fact that there are no parallels for this card, which would have been nice.

Still, it’s a nice card to add to your collection and can command quite a steep price if you can find one in the PSA 10 condition. You’ll still find many collectors selling these cards because there were many of them initially.

The funny thing with Topps Traded is that they produced two rookie cards for Sanders: one for football, and one for baseball, which we’ll take a closer look at later on. 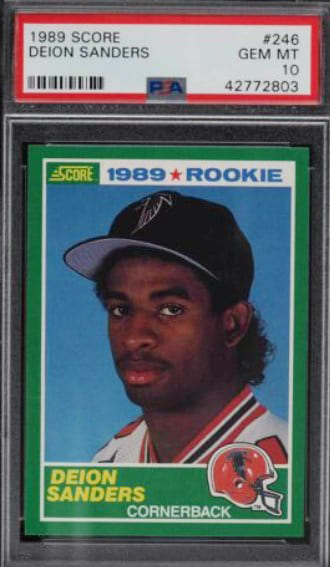 The 1989 Score Deion Sanders rookie was preferred by those collectors who wanted to have a higher quality stock with their cards.

So it’s fair to say that these Score cards may have kept up better than the Topps Traded cards. It will probably be easier to find a GEM MT of this Score card because of the high-quality design.

What strikes me with this card is the green border that makes it stand out so well. And with the sky-blue background on the image, it makes Sander’s portrait stand out nicely, making for a memorable card.

But despite the higher quality stock, this card can be had for much less than some Topps Traded cards, unless you’re looking for the GEM MT card. There are even some autographed cards, which is a bit more expensive.

This card was very much a part of the Junk Wax era, which meant crazy high print runs that exceeded the demand… The result was that most rookie cards retained little to no value in the years after release. 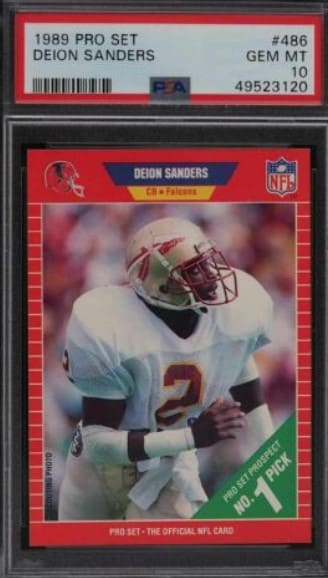 The card says that Sanders was the no.1 pick in the draft, but he was actually the fifth overall pick in the 1989 draft, although it does make the card a little bit nicer, doesn’t it?

For the Pro Set card, it’s typical to see the red border with white horizontal stripes. There are some graphical elements above the image of Sanders, which include his team’s badge, the NFL badge, and some basic information about the player.

The image itself is also interesting with Sanders in action, probably looking to catch a pass from his teammate or an opponent. After all, he was considered one of the best pass defenders in the league and still is seen as one of the best even today.

The main problem of this card is its high print run. You’ll have no difficulty finding a PSA 10 card, because there were a ton of these cards printed initially. According to PSA, there are more than 800 PSA 10 cards of this type, which is by far the most out of any grades.

This is great news if you’re on a budget.

Deion Sanders was also a part-time baseball player initially drafted by the New York Yankees, although he carved out a 12-year career in the league playing with the likes of Atlanta Braves, Cincinnati Reds, and San Francisco Giants.

These are the best baseball Deion Sanders cards. 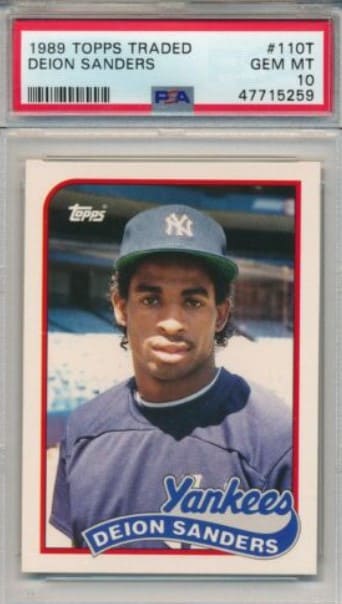 As I’ve already mentioned, Deion Sanders had two Topps Traded rookie cards: one for baseball, and one for football.

It’s a bit of an anomaly in the card collecting world to see this. It would certainly be interesting to try and collect both so that you fulfill your Deion Sanders collections.

The great appealing factor to buy this card is that it’s the only rookie card of Sanders from 1989, which was his official debut year. Most other rookie cards will be from 1990, although this one tends to be preferred by most collectors.

It’s the Junk Wax era in full effect here, again. Even though it’s his only rookie card from 1989, this card can be bought for crazy cheap values.

We’re talking about a couple of hundred dollars.

If you’re looking for something a bit more premium and quality, then the Tiffany parallel will take your fancy. 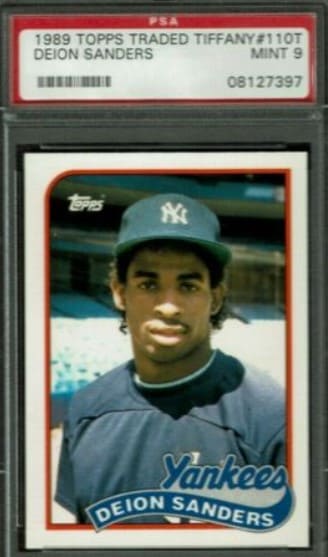 The Tiffany parallel is largely the same as the base card in terms of looks. The main difference is the higher quality card stock, which means these cards will last longer and will age much better than the base card.

It’s also much rarer than the base card, meaning that this Tiffany version is among the most expensive Deion Sanders rookie cards overall. It might cost several thousand dollars to get because of its relative rarity as compared to some other base rookies with higher print runs. 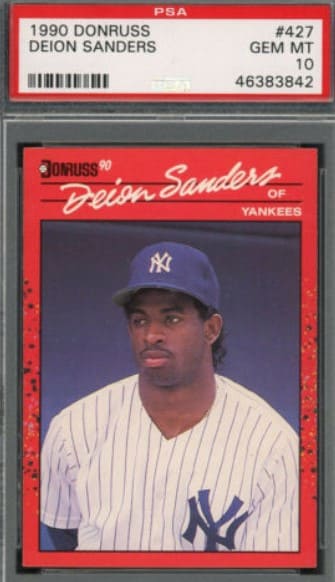 The Donruss Sanders rookie card comes from a cluster of cards from 1990 that featured Deion Sanders for the first time.

Even though the Topps Traded cards seem to be the most popular baseball rookie cards of Deion Sanders, Donruss is still a reputable brand and many people still look for the Donruss card today.

As is the case with most of his rookie cards, the Donruss card here featured a high print run and many of them are still available in the GEM MT condition. You’ll have no problem getting it in the top condition without having to spend a fortune on it.

This makes Deion Sanders cards very appealing for budget collectors looking to get some iconic stars into their collection.

This was also the case for most of the late 80s and early 90s cards which again comes back to the Junk Wax era we’ve talked about before.

Yes, there will also be some knock-offs for this card and a lot of ungraded cards, but you’ll also find graded cards that will go only for a couple of hundred dollars, even in the highest conditions. 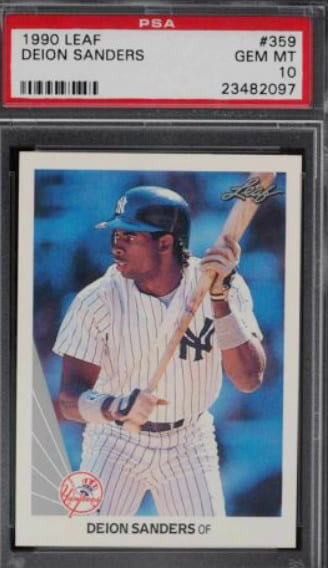 The Leaf card is another option if you want a baseball rookie card of Deion Sanders.

While it won’t turn many heads with its design, it’s still a nice collection piece for those who admire Sanders and the career he’s had.

Leaf cards were widely available and also had a high print run, which exceeded the demand of the collectors. This resulted in the devaluation of some of the rookie cards from that time, including this Leaf Sanders rookie card.

Today, you will find many PSA 10 and PSA 9 rated cards, which is great if you want the best kept cards possible.

And they won’t blow a hole in your pocket, either. You can get a PSA 9 of this card for under $100, which is fantastic news for budget-minded collectors. Even a PSA 10 will only cost a bit more than that, but it won’t be too expensive. 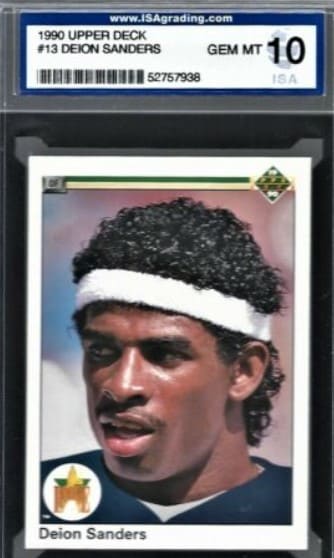 The last card we’ll mention from this 1990 group of Sanders rookie cards is this Upper Deck card, which is one of the more popular cards from the 1990 Upper Deck.

It has a very minimalistic design and a full frontal image of Deion Sanders on the field, which is an interesting combination.

Lower graded cards of this type can be had for a good price when you consider the player that Sanders was.

How Much Is a Deion Sanders Rookie Card Worth?

Most Deion Sanders rookie cards will cost anywhere between $100 and $500 depending on the condition of the card.
You must know that these cards were a part of the Junk Wax era, meaning that cards were printed out like crazy and exceeding the demand for them.
This means that most cards from 1987 to 1994 carry a significantly lower value than they normally would, which means they’re great for those collectors on a budget.
Some parallels of the base rookie cards like the Topps Traded Tiffany will be more expensive and the prices will go into thousands of dollars.

Is a Deion Sanders Baseball Card Worth Anything?

How Much Is a Deion Sanders Atlanta Falcons Card Worth?

Deion Sanders’ rookie year in both baseball and football was 1989, although most rookie cards from football will be from 1990 (with the exception of 1989 Topps Traded).