Spending 35 years in one NBA Basketball Organization seems amazing… and sure enough, Wes Unseld did just that!  Whether they were the Baltimore Bullets, Capital Bullets, Washington Bullets, or Washington Wizards, Wes Unseld can honestly say that he devoted his career to that organization.  Arguably the best player to put on a Bullets uniform, Wes Unseld made his mark with the team at the start of his career winning the NBA MVP and NBA Rookie of the Year awards following his rookie season.

Wes Unseld was an incredible player and collectors of memorabilia from NBA history are well aware of this.  Unseld’s sports cards may have monetary value, but their value as a tribute to a brilliant basketball mind is immeasurable.  Let’s take a look at Wes Unseld’s Rookie Cards and Other Notable Cards. 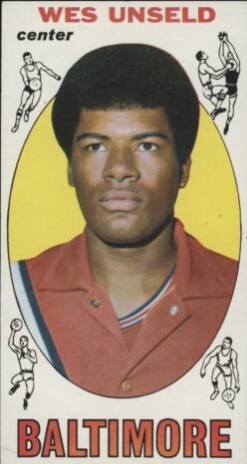 Hailing from the world-famous Topps 1969-70 Basketball set, Wes Unseld’s rookie card is impressive. The image of Wes with a look of determination and confidence is in the center of the card with a yellow oval background.  The card has a white border with 4 different cartoon actions surrounding the yellow oval.  Wes Unseld’s name is listed at the top of the card in red letters and the team city is listed at the bottom of the card.  Absent is the team name, Bullets, and this is due to compensation issues the Topps company had with the National Basketball Association.  Although this is his official rookie card, Wes Unseld had already played a year in the NBA when this card was released.  And his first year in the league was amazing!  Not only did he win NBA Rookie of the Year Honors but he also won the NBA Most Valuable Player honor for the 1968-69 season.  This was practically unheard of but Wes Unseld really was that good!

The 1969-70 Topps basketball set marked the return of the Topps company to distribute basketball cards.  And it is so famous because it marked the return of mainstream basketball cards!  Before Topps released this set, basketball fans were without any major cards for 8 years.  That is why this set contains some extremely valuable rookie cards.  Topps created this set in a Tall Boy format.  The cards were the same width as standard cards but they were taller than typical cards.  The Wes Unseld card is one of the famous rookie cards from the set.  For graded copies of this card, collectors may need to pay a decent amount.  But savvy collectors may find bargain copies of this card and some may be in very good condition.  Whatever a collector pays for this card, it is definitely worth it.

Although this is technically not a card, it is an insert that was included in packs of the iconic 1969-70 Topps Basketball set, so it is included in this article as a rookie “card.”  Topps created 23 of these insert rulers for the set, and the players depicted on these rulers were considered the upper echelon of players in the NBA.  Even though he had only played one season at this point, Wes Unseld was ranked in this top tier of players.

The Ruler is really neat and a great idea developed for the 1969-70 set.  The caricature of Wes displays his height and is set on a green background.  The look drawn on the cartoon Unseld seems to show confidence and reminds us that, sure enough, he was coming off his Rookie of the Year and NBA MVP year!  Finding these rulers in good condition may be difficult, but collectors will be rewarded with a good product.

Wes Unseld’s rookie cards may be highly coveted but some other really nice cards are available.  Some may be very popular, but some may be located at pretty decent bargain prices.

Topps returned again with this 1971-72 basketball set, moving away from the “Tall Boy” format, instead releasing standard size cards.  Topps was also expanding the number of cards per set which means more players were being featured.  With an eye-catching font at the top of each card that comes directly out of the early 1970/s, this set will only continue to increase in popularity.

This Wes Unseld card is very obtainable, even highly graded.  The posed image of Wes overlays a yellow background.  The city name, Baltimore, is posted at the top of the card in yellow and Wes Unseld’s name is at the bottom in fairly big letters.  The team name is included on this card for the first time since the Topps company returned to distributing basketball cards. 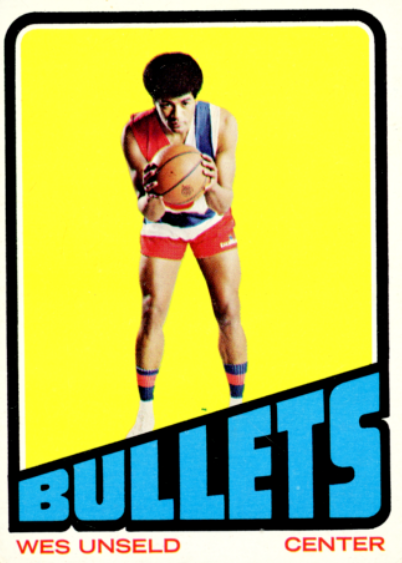 The 1972-73 Topps Basketball set was another standard size set that continued the practice of including both ABA and NBA cards.  These cards had a rather simple design but the team name was cool.  From left to right, each letter in each team name grew in ascending order.

This Wes Unseld card is very popular and collectors may need to pay decent prices for high-graded versions.  Bargains may be available for the savvy collector.  This card features a powerful posed image of Wes with that ever-present look of determination. 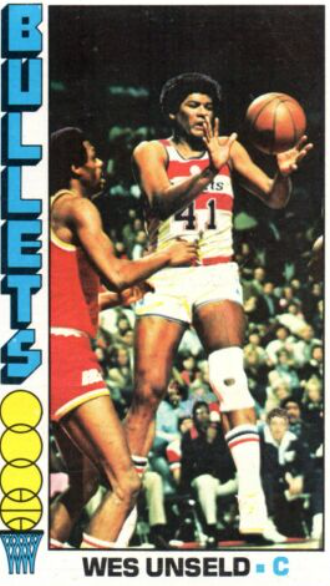 For this set, Topps didn’t just move away from standard size cards, but they moved BIG-Time away from it.  Topps didn’t decide to use the “Tall Boy” format, instead they went BIG.  This set included cards that were 3 ⅛” by 5 ¼”!  These cards were very popular with autograph hounds and just typical fans.  Topps no longer included ABA players in this set because the league had dissolved prior to this season.

This card features an action shot of Wes Unseld in midair appearing ready to snag a pass.  The team name is written down the left side of the card in blue letters.  An image of a basketball approaching a net is below the team name.  Absent from the front of the card is the city name.  The Bullets were now playing in Washington; they were no longer known as the Baltimore Bullets, or the Capital Bullets.  They would be the Washington Bullets for the next 2 decades. 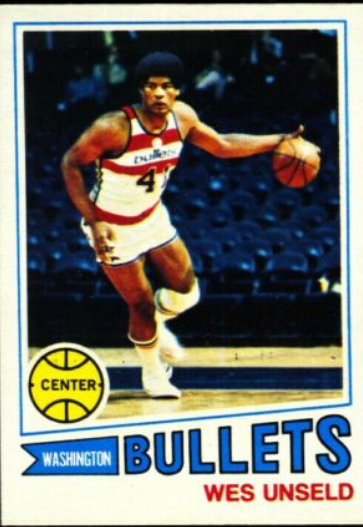 This 1977-78 Topps set returned to featuring standard size cards.  They also used a relatively simple design.  This Wes Unseld card features a nice action shot of Wes dribbling down the court.  The city and team name run across the bottom of the card with Wes Unseld’s name below.  Unseld’s position, Center, is written inside of a yellow basketball in the corner of the image.  The most notable aspect of this card is that it is the card released the year that the Washington Bullets, after multiple tries, captured their first NBA Championship! 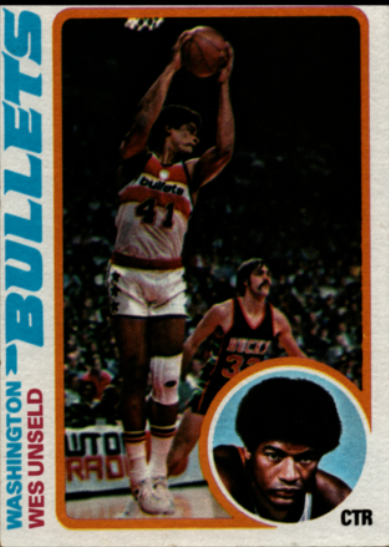 Topps performed their magic once again when designing this set and releasing it!  A personal favorite, this set features 2 images of players on each card, an action shot and a little circular bubble that contains a head shot of each player.

This Wes Unseld card features one of the more powerful action shots of Wes appearing to be about to sink an easy lay-up.  The picture inside the bubble is an image of a confident Wes seemingly saying, “I know we are NBA Champions.”  Even highly graded copies of this card won’t break the bank.  Collectors can find copies that are in good condition for very reasonable bargains. 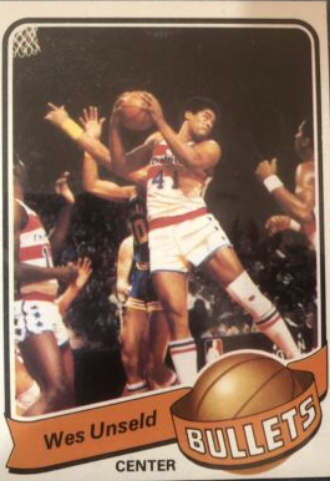 This is another powerful action shot of Wes nearing the end of his playing career.  His name is diagonally posted on an orange banner that loops around a basketball.  The team name is also displayed on the banner in white letters.  His position is listed at the bottom of the card.  This card is very attainable and collectors can find copies.  Topps captured neat action shots of Unseld and any serious collectors will want some copies of this legendary player.

It is very interesting to note the changes evident in trading cards from the 1960’s until this Topps set near the end of the 1970’s.  Instead of posed images of players with names printed in large fonts, we see cardboard where most of it is an image of the player.  This design would remain popular in the hobby for decades to come. 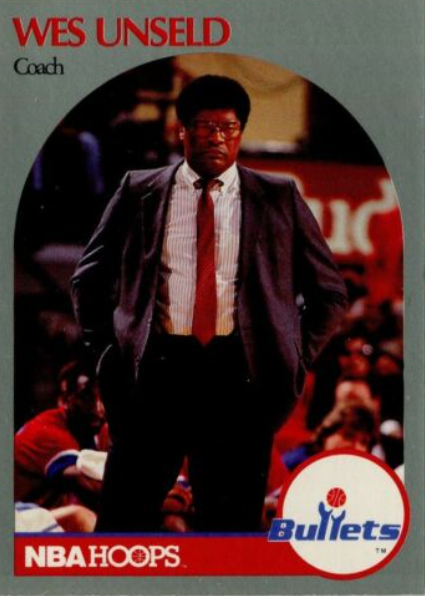 The final card addressed in this article is a Wes Unseld “Coach” card.  Even though Wes Unseld was an incredible player, fans and collectors should remember that the majority of his career was spent as either a coach or executive with the Washington Bullets/Wizards.  The back of this card lists the numerous accomplishments of Wes during his playing career.  Fans and collectors can find this card at reasonable prices.

This NBA Hoops set is very professional and it is a neat design.  The set contains some cool rookie cards but also some other rare images.  Serious collectors may want to keep an eye on sets like this.

Cleveland Browns fans have Jim Brown.  New York Yankees fans have Babe Ruth.  Washington Bullets fans have Wes Unseld.  He will always be considered one of the elite athletes in basketball.  Unfortunately, the world lost Wes when he passed away on June 2nd, 2020.  His son, though, has begun coaching the Washington Wizards, so the Unseld name could bring another NBA championship to Washington!

There should be no question that collectors will always be seeking Wes Unseld cards.  He was inducted into the Naismith Basketball Hall of Fame in 1988.  He has also been named to the NBA 50th Anniversary team in 1996 and the NBA 75th Anniversary Team in 2021.  On top of those honors, he was a legend.  He may be most remembered for his skill at collecting rebounds, but he was just an incredible all-around player.  Fans and collectors of the hobby will never forget that!