Shawn Kemp is one of the best power forwards of the 90s and early 2000s.

The Reign Man was included in the NBA All-Star team 6 times in his career, which is a testament to his quality as he established himself as one of the leading PFs of his time.

Kemp was drafted by the now-defunct Seattle SuperSonics in 1989 in the first round; the expectations were thus high, and he delivered early in his career, which was later marred by his off-the-field struggles.

If you’re looking for the best Shawn Kemp rookie card, these are your best options.

You’ll find some interesting options here. Let’s take a look at the more mainstream options first and then move on. 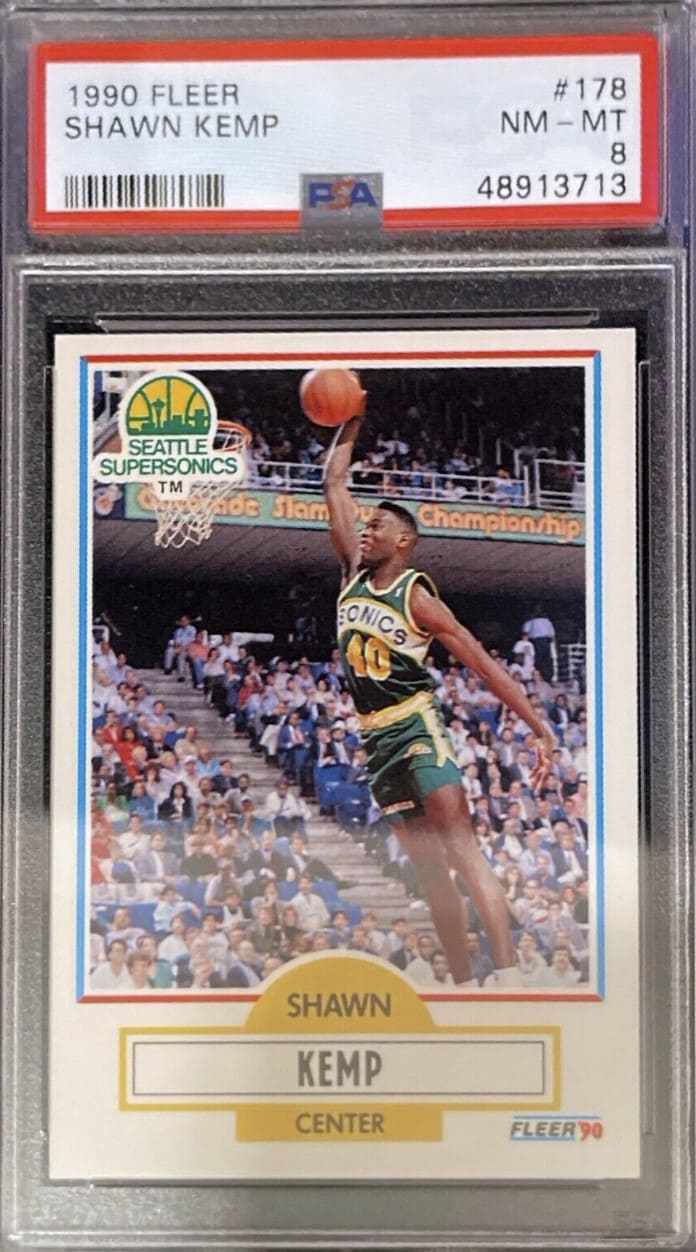 Without a doubt, the 1990 Fleer card of Shawn Kemp remains one of his most popular options, despite a relatively high print run.

This card was very much a part of the famous junk wax era when cards were printed at large and were easily available in almost every shop in town. This drives the prices of these cards way down, even for popular players like Shawn Kemp.

Even though Kemp declared himself eligible for the draft in 1989 and participated in that draft, the vast majority of his rookie cards come from 1990.

And this Fleer card was one of the most popular options as it came out. This was mainly because of the good brand reputation that Fleer had at that time when it was perhaps the most established brand for basketball cards.

You can get this card for a decent price, too.

When looking at the listings, I noticed quite a few of these cards carrying autographs, which naturally increased the price for the card: 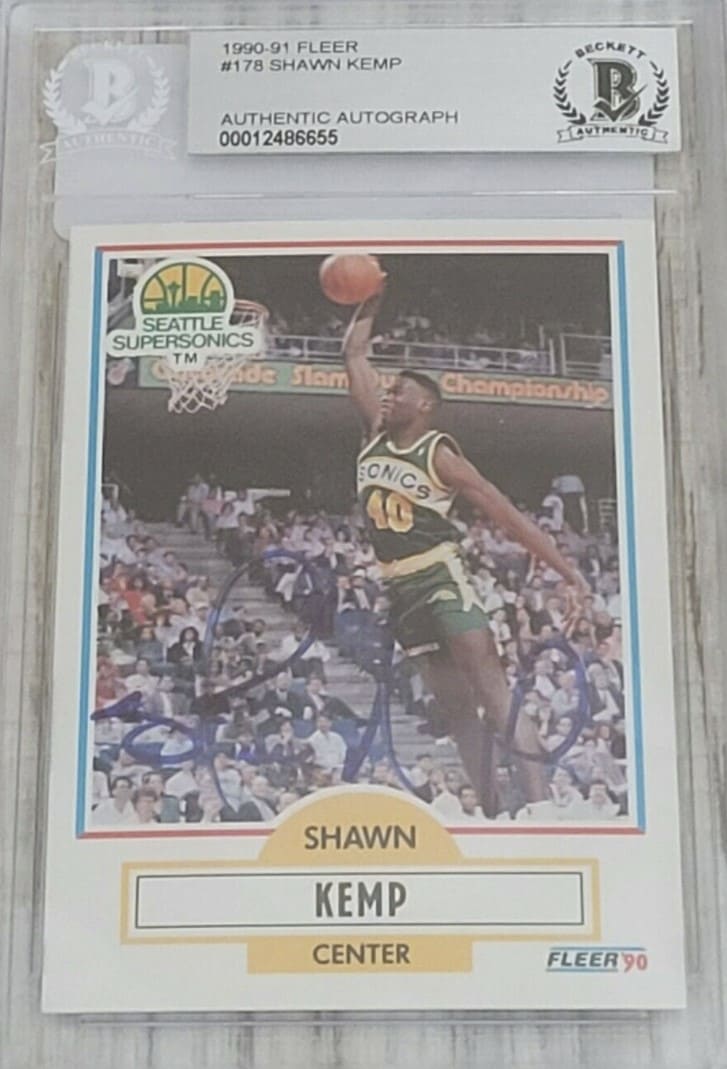 Now, you must know that this card doesn’t have an official autograph, so it was signed by Kemp himself and not as a part of Fleer’s design, which drives up the value for the card. It’s also the only way you can get an autographed card of Kemp if you desire it.

Just note that there might be some false autographs along the way. Sure, this one is validated by BGS, but just watch out for cards that are not graded or validated by a grading company and they have an autograph. 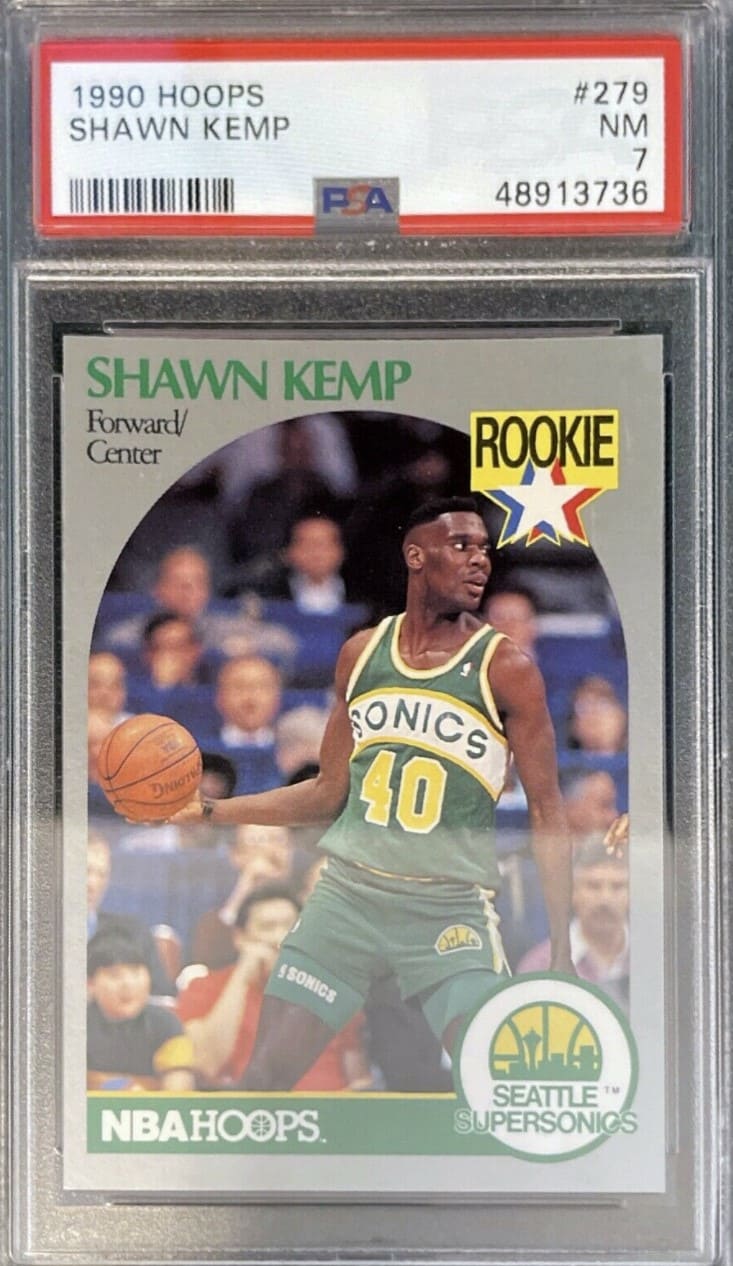 The next card on this list is the NBA Hoops card of Shawn Kemp from 1990. NBA Hoops is famous for its long tradition and reliability, as it’s still being produced nowadays.

This is a classic option that you can go for and it has that typical Hoops design to it as well. You might be able to get it for a relatively cheap price due to a higher card print, too.

Overall, Kemp’s card from the 1990 set remains to be seen as one of the most popular cards from this Hoops set, but that doesn’t necessarily command the price of this card.

The only struggle that you might encounter is finding cards that are graded highly, which was the case when I went through the listings on eBay.

It doesn’t offer anything particularly flashy or something that would stand out, but that’s the case with most basketball cards from the early 1990s. These are great for those who prefer classic-looking cards without having to spend a fortune to get them.

Same thing here as with the Fleer cards – you might find some autographed varieties as well. 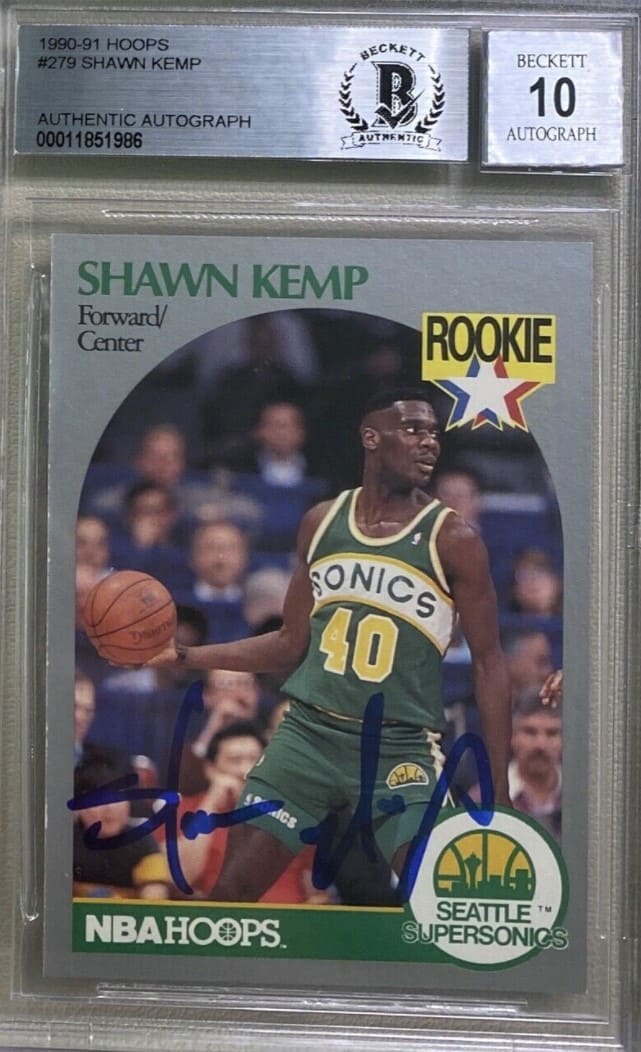 This autographed card will usually sell for a bit more than the base card, but it’s also slightly harder to find.

Just like with Fleer cards, these autographed cards were not issued as part of sets that were released officially. Most likely, they were signed after they were acquired by Shawn Kemp himself, which means it’s again important to validate the authenticity of the auto.

Luckily, this card is graded so we know the autograph is legit. But it might be worth taking some time to take a look at the autographed card you’re looking for and have it graded. 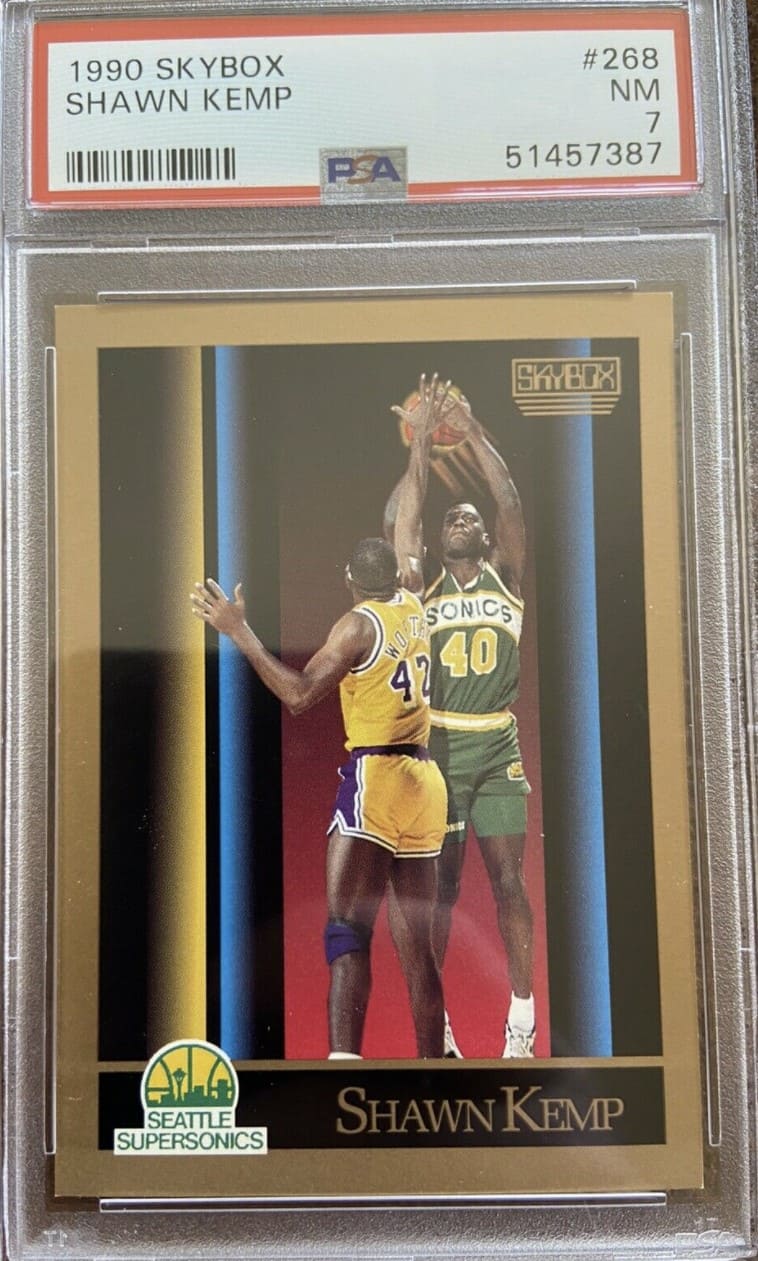 The third mainstream option for Shawn Kemp’s rookie cards is this 1990 Skybox card that is numbered #268.

This card got a lot of attention because it was one of the few Shawn Kemp cards that were available widely, but primarily because there’s also James Worthy on the card, who is one of the biggest LA Lakers legends in history. He’s wearing the famous #42 jersey number that is retired at the moment for the Lakers.

Apart from that, you have a slightly different design as compared to the other two rookie cards of Shawn Kemp on this list. There’s no crowd in the background; instead, you’re greeted by something that you could describe as a very 90s design, with lines of blue, red, black, and yellow interchanging in the background.

There’s not a lot of variety out of all Shawn Kemp rookie cards, but luckily, you’ve got some choices and they’re going to be relatively inexpensive.

The Skybox card is also an appealing option if you’re a Lakers fan, as there is Worthy also included on the card. But if you’re after a more classic look, then it’s better if you probably consider Fleer or NBA Hoops instead, although the Skybox card is still a great option that won’t cost too much.

As is the case with every rookie card you buy, it’s worth taking some time to consider the options you’ve got, and what you’re looking for from a card.

With Shawn Kemp’s rookie cards, there are not that many options to choose from.

You only have three mainstream options here: Fleer, Skybox, and NBA Hoops.

As for NBA Hoops, it’s still producing basketball cards and still going strong. It remains to this day one of the most popular basketball card companies out there, as it produces rookie cards for some of the biggest modern basketball stars even today.

Skybox was also a major basketball card company of the 1990s, although the success of the company waned a bit into the 2000s. It was particularly known for its wide variety of colors, which brought a slight change to the market in the 1990s.

Which one you’ll choose will depend on your personal preferences when it comes to looks. They’re all good options and they’re also almost equally valuable, although the Fleer card still tends to sell a bit better than the rest.

Also, it’s worth noting that finding an NBA Hoops card with a good grade might prove to be a challenge, which is possibly why most people tend to gravitate towards Fleer and Skybox Shawn Kemp cards instead.

Shawn Kemp is today seen as one of the best power forwards of his generation.

Remember the Seattle SuperSonics? The team that got re-franchised into OKC Thunder? Well, this team remains in the memories and hearts of many basketball fans.

And with those memories come memories of great players, and Shawn Kemp was certainly one of the better ones for this team.

Kemp was drafted in 1989 as a first-round pick. Initially, he was seen as an athletic but unpolished young talent who could one day make it big in the league. Besides, he had his off-the-field problems early on, so that might have stopped many teams from drafting Kemp in the first place.

In his first seasons with the SuperSonics, Kemp didn’t play much but he really came into his own in his second season.

Kemp’s best season with Seattle was 1995/96 when he led the SuperSonics to the finals, recording a record 64-win streak in the league. Unfortunately for Kemp, they encountered the Chicago Bulls, one of the best teams in NBA history, which meant that he couldn’t capitalize on his biggest chance to win the NBA title.

In his later career, Kemp stumbled into problems off the court where he battled drug and alcohol abuse, although he still had some good games with the SuperSonics and later the Cavaliers.

He is still remembered for his athletic and physical style of play, which is why his rookie cards still remain popular.

So, these are your best options when it comes to Shawn Kemp rookie cards.

There are not that many options, but there are some nice alternatives that you can pick from. One of the best things about these early 1990s cards is just how cheap they are, and how almost anyone can buy them.