Run fast. Step back. Confuse the defenders. Stop. Drain down that three-pointer. Repeat.

That’s the image I get when I think of James Harden, and it’s been causing NBA defenders nightmares ever since his draft in 2009.

There’s something magical about Harden’s style of play. He’s the kind of player that makes the fans come back game in game out just to watch his trickery. He’s that good.

And of course, he’s got the numbers to back up his “slow down fast” style of play that some people choose to call.

These are the best James Harden rookie cards in the basketball card collecting world. 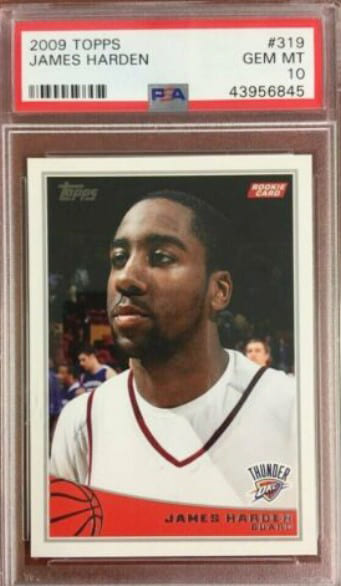 Let’s start with a no-nonsense choice, and that is the 2009 Topps James Harden #319 rookie card.

This is a card that represents a steady investment with great potential for the future. While it’s not his most valuable rookie card, it’s his most common rookie card and the one that will interest every collector.

There’s nothing special about this card in terms of looks. It doesn’t have the flair of premium cards, and the overall design of the Topps set from 2009 is a bit basic if we’re perfectly honest.

But it’s all about who’s on the card rather than how the card looks.

And here, you’ll be able to find James Harden in his pre-beard days. There are several parallels to choose from, including Gold, Black, and Printing Plates.

I also find the description on the back of the card a bit odd to say the least:

“James was not labeled a great pure athlete at Artesia High, but he made himself into a player good enough to produce a pair of California State Titles.”

Let’s continue the trend of having the more widely available cards first with this Bowman ‘48 card.

And yet again, it’s another card that looks basic, but it’s a card that stands for longevity, reliability, and safety. If you decide to invest in this card, you won’t look back because it’s bound to retain its value and even increase in value in the future.

Bowman is, of course, a very reputable card company and while it’s primary business is in baseball cards, it’s also a very well-known company for basketball cards.

If you don’t have dozens of thousands ready to be hashed out, then you can either choose between this Bowman card or the Topps card – both are great for those on a budget and they both carry great potential. 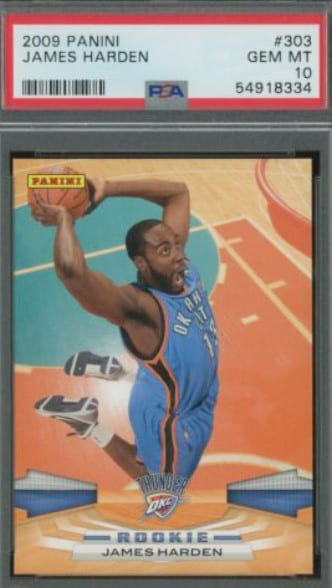 The 2009 Panini James Harden rookie card is yet another excellent option for those card collectors on a budget.

The great thing about this card is that it’s action-packed and so full of life, even though it doesn’t have the most appealing graphical layout in the world.

And it’s even more easily available than the Topps or the Bowman cards we’ve just featured above.

One of the things that makes it so budget-friendly is the fact that it comes from Panini. While we know that Panini does produce some great premium sets like the National Treasures set, we don’t often see base Panini cards in the basketball world.

But this card set is an exception and that’s probably why this card hasn’t quite reached the heights of some other James Harden cards (yet). 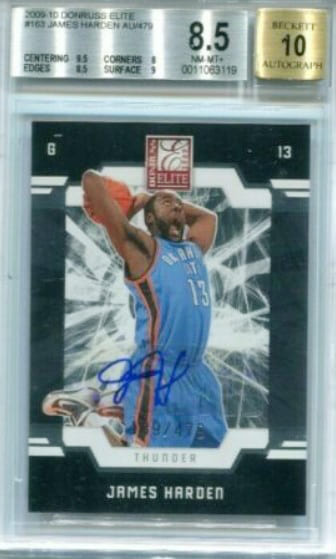 Considering that this Donruss Elite card of James Harden had a limited print run of 479, an autograph on the card, and a flashy design, I’d say this card represents good value for money.

In terms of prices, this card will fluctuate somewhere between the Topps and the Bowman card we’ve seen above, so it’s not impossible to buy even if you don’t have several thousand to spend.

I think this card has a long way to go still in terms of prices, especially considering that it has an autograph on it.

So if you can get one for yourself for a decent price, then you’re looking at a great card to own and a potentially sound investment for the future. 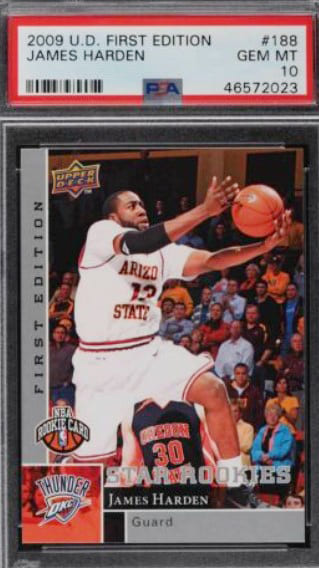 Having a James Harden card in his OKC Thunder apparel is one thing, but having this UD First Edition card in his Arizona State is next-level when it comes to Harden rookie cards.

While some collectors don’t like players wearing their college jerseys, it will add a special touch for other collectors that might make them want to own this card.

One thing’s for sure: this card will remain one of the greatest cards for entry-level to intermediate collectors in the future, too.

So if you’re looking for a card that’s widely available and not too expensive, look no further than this UD card – especially if you can look past the fact that he’s wearing his college jersey on the card. 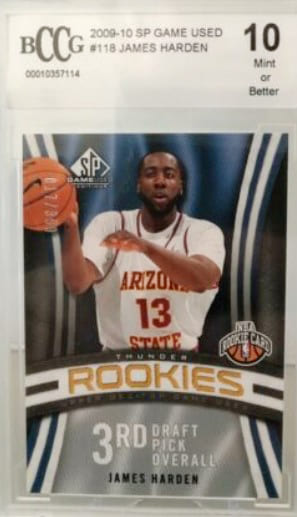 The SP Game Used card is yet another example of Harden from his Arizona State days. As for the base card, there are only 399 copies of it which makes for a rare card that many collectors would prefer if you’re looking for rarity.

But despite that, the card is among the more affordable cards to own.

It has a relatively premium feel to it, as well. Perhaps it’s because he has the Arizona jersey on the card – who knows.

The fact is that there are several autograph parallels to choose from – some of which are numbered to only five copies or so, which means they’ll go for relatively big prices.

The signatures card, for example, only has five copies and for a pristine card like that, you’re looking at almost certainly a five-figure sum to get the card. 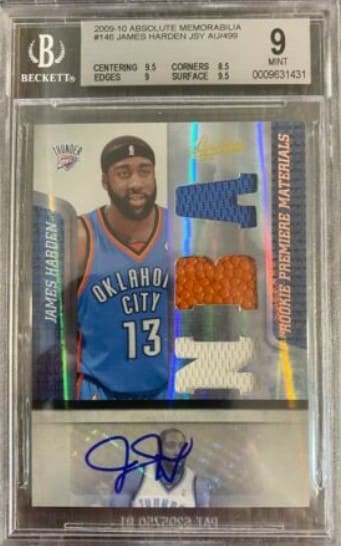 The Absolute Memorabilia card ticks all the boxes when it comes to premium cards: it has an autograph (although not on the card, but on the sticker), a patch of match-worn jersey, and a shiny design.

While the overall graphical layout and the design of the card might not be the most appealing in the world, you’re still getting a high-quality card that you can trust as an investment.

It is also limited to only 499 copies, which further increases the price and the value of this Absolute Memorabilia card.

There are also some relic parallels that have less copies than that; one of them only has 25 copies and it also has an autograph, so if you want something even more premium-feeling, you can go for that. 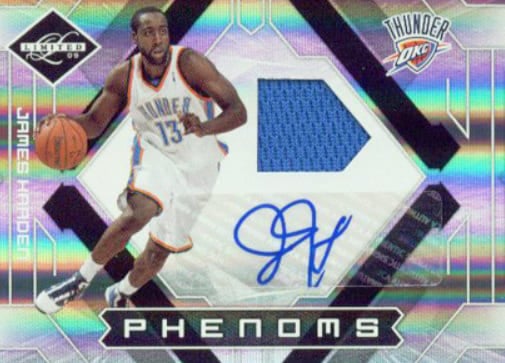 Panini Limited have done well with this James Harden rookie card. The idea behind this card set was to create something premium-feeling with a very shiny look to the card, and of course, the limited print run.

There are only 299 prints of this card, making for a very valuable choice. You will have to spend several thousand dollars to get the base version of this card, although you’re potentially looking at more if you want one of the parallels.

In terms of parallels, you can opt for the following: Spotlight Silver (25 copies), Spotlight Gold (10 copies), or Platinum (1 copy). Of course, the Platinum parallel will be the most expensive but the Silver variant might be a bit more budget-friendly. 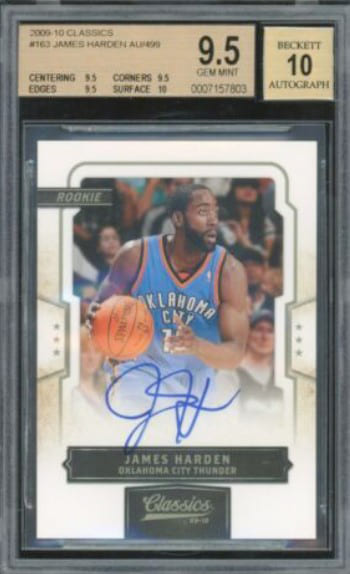 If you want something classical that will age very well with time, then look no further than the 2009 Classics James Harden rookie card.

Like the Absolute Memorabilia card, the Classics card from 2009 has 499 copies to its name, meaning it’s a bit of a challenge to find a well graded base card of this type. What is more, there are some unsigned parallels which will be even more expensive than the base card, and even harder to get.

While the base card doesn’t have a jersey on the card like some other premium cards on the list, it still has an autograph and a fairly limited print run, making it a popular choice for those who want premium products.

And with its elegant and classical look, it’s bound to age well in the coming years and decades. If you have several thousand dollars to spend, you can definitely consider this option.

Both cards are limited to 225 copies, and both have a very similar style and of course, an autograph on the card. The interesting thing here is that both autographs appear to be on-card autos, so every card will have a slightly different autograph.

The images are what separate these two cards, though.

On both, you’ll find James Harden still in his Arizona outfit, which again, will appeal to some collectors while others will want his OKC Thunder jersey.

But if that isn’t the limitation for you, then you should definitely consider getting one of these two – or both if you’re a perfectionist. 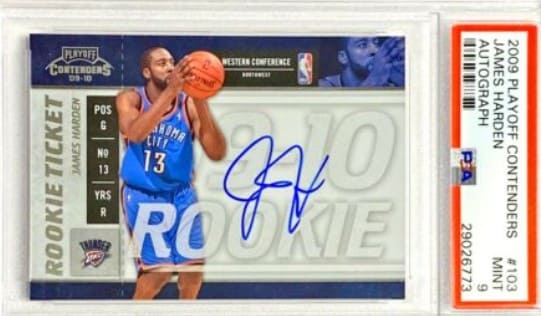 Playoff Contenders Rookie Ticket is one of the most popular brands for basketball rookie cards. It is limited to 499 copies – however, it doesn’t have serial numbers on the card, which will mean that the card will lose some of the premium feel, but it is still a card that remains high in-demand.

The design of the card features a large autograph on the card, which will appeal to those who want to show off the autograph as the centerpiece of the card.

Be prepared to shell out several thousand for this card. The problem is that it’s hard to get in better conditions, so you might have to accept that you won’t be able to get a PSA 10 with this instance of the card. 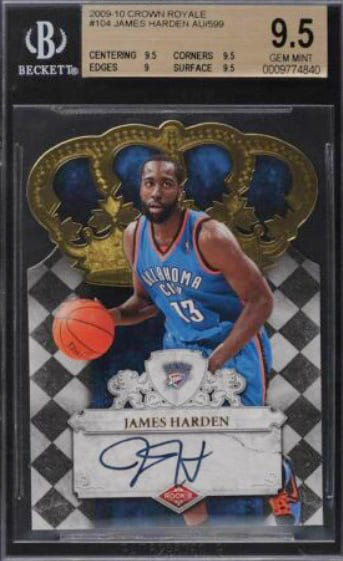 Crown Royale cards have a reputation for being some of the most premium cards on the market. Pair it with Harden on the card and his signature, and you get a great combination.

I like how they’ve incorporated the signature on the card. Instead of adding the sticker with the autograph, they’ve included it in the overall design of the card.

It’s typical for these Crown Royale cards to have a die-cut design, too. It’s a card that’s limited to only 599 copies, which puts it among the rarer Harden rookie cards. 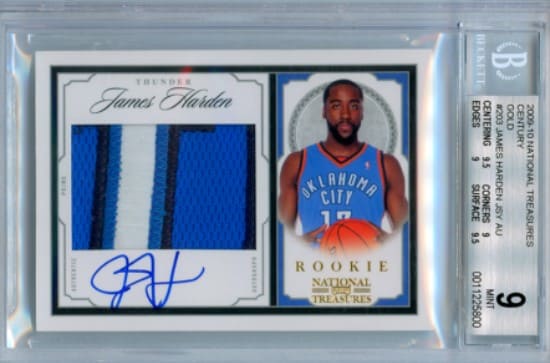 Last but not least, we simply must mention the National Treasures Harden rookie card.

It’s by far his most expensive rookie card. The base card is limited to only 99 copies, which means it will be a bit of a struggle to find a card in the best condition.

But if you can find a card that picks your fancy, you’re looking at a potentially six-figure sum to get this card. As with most National Treasures cards, you’ll get an autograph and a patch of a match-worn jersey to go with the card.

You can expect to have to shell out the big bucks to get this card.