I still remember him from the 1997 Slam Dunk Contest when he was still a fresh player in the league, so not much was known about him.

His best days in the NBA came much later though, especially with the Boston Celtics where he formed the “Big Three” with Paul Pierce and Kevin Garnett. It was one of the most entertaining teams to watch.

Today, we remember Allen’s draft year as one of the best rookie classes ever to enter the league with the likes of Kobe, Steve Nash, and Allen Iverson.

That said, these are the best Ray Allen rookie cards to watch out for. 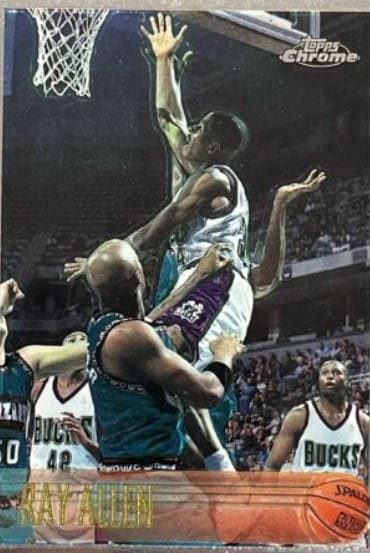 Starting off the list is the 1996/97 Topps Chrome Ray Allen rookie card. The Topps Chrome brand was one of the most popular card brands at the time, because it contained a highly valuable Kobe Bryant rookie card.

However, getting Ray Allen also paid dividends and is still hugely popular today.

This is very much the premium and most popular Ray Allen rookie card on the market. Looking at this base card, we can see Ray Allen fighting for a rebound under the hoop.

The immense popularity of Topps Chrome cards was further increased by the exceptional rookie class that was coming through in 1996. These cards were famed for their chrome look, and if you were able to get a Kobe or a Ray Allen card, you were lucky.

On top of that, many premium card collectors opt for the Refractor parallel instead of the base card, which is an awesome card on its own.

While it doesn’t counter today’s parallels in terms of graphical development and looks, it was one of the hottest cards to own in the 90s, especially considering how rare these were and the shine was the hot thing collectors went crazy for.

The Topps Chrome refractor is among the most expensive and most popular Ray Allen rookie cards. It’ll cost several thousand dollars to get, that’s for certain. 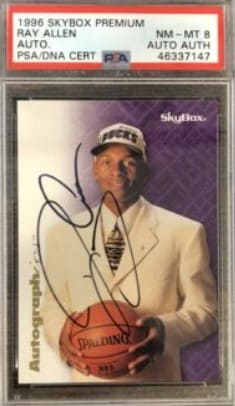 Skybox Premium cards were some of the most popular cards from the 1990s, as they had their typical blue and purple design with the player’s image from the draft night on the card.

The Ray Allen card here is not different.

The main difference, though, is the fact that this autographed card was a part of the Autographics insert, which only has a population of three.

As you may expect, there may be a lot of knock-offs online for this card, so it’s certainly better to go with graded and certified cards like this one. Although you might have a tough time finding it.

Autographed cards rose in popularity towards the end of 1990s, as more and more card companies started including autographs on their cards. Ever since then, autographs have become a regular thing nowadays. 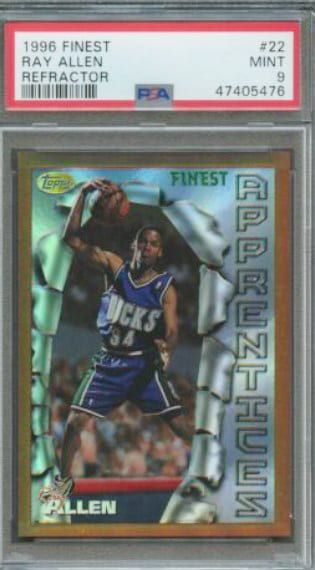 The 1996 Finest Ray Allen rookie card was not famed for its base card as much as it was for its refractors.

This card had three main refractors: bronze, silver, and gold. Bronze was the most common, with a population of 1 in every 12 packs. The silver card was attainable in one in every 48 packs, while the gold one was the rarest with only one per every 288 packs.

Obviously, the gold one will be the most expensive although it’s highly unlikely you’ll find one listed.

This particular card on the image is the bronze refractor, which is a bit more widely available but still more expensive than the base card. It may be worth in excess of the $1000 mark, while the base card will cost less.

If you’re a fan on these Finest cards, then you should get one of these. The card has a sort of a “torn” look with Ray Allen’s image in the middle, while the borders of the cards will vary based on the parallels. 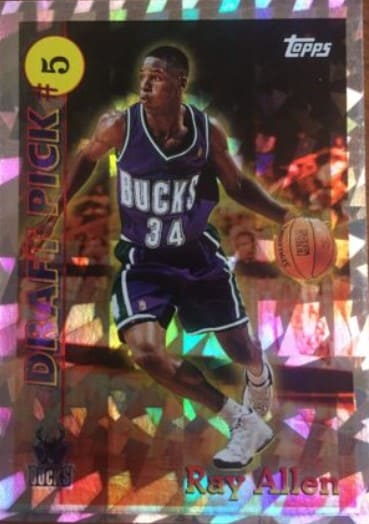 Next up, the Topps Draft Redemption rookie card, which is yet another shiny option that you can go for.

By now, you should know that 90s cards were all about the shine. The shinier they were, the more popular and expensive they were.

This card is not as popular and expensive as the Finest parallels, mainly because it’s a bit more widely available and not as rare as the gold refractor of the Finest card.

One of the main issues of this card is its quality. Namely, you’ll find a lot of ungraded cards, which means that they’re prone to chipping, while the corners tend to take the brunt of the load on the card.

That’s why I would recommend buying a graded card if you can, although it’s better to buy the cards that you can see in person if you go for ungraded cards. 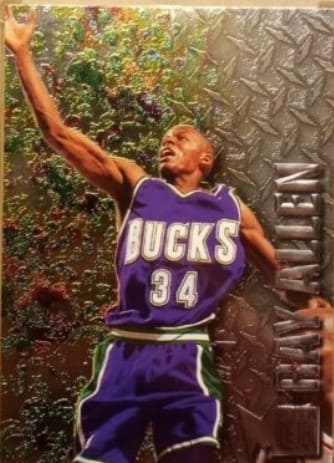 The Fleer Metal cards were all the rage at the time when Ray Allen made his NBA debut. They were liked due to their shiny look and metal looks.

This card is one of the most expensive Ray Allen rookies, and the Precious Metal cards are even more expensive.

Get this card if you want a more shiny look, but be prepared for a lot of ungraded cards, too. 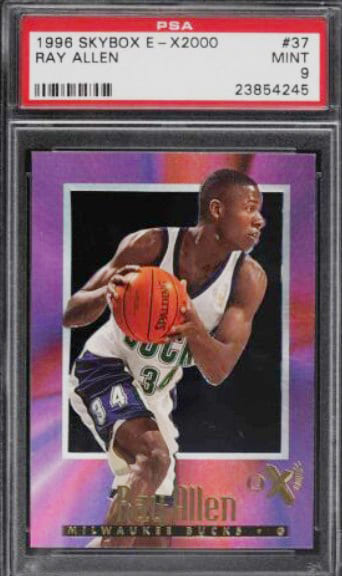 If you collect 90s cards mostly, then you know that Skybox is in there somewhere among the most popular brands for rookie cards.

And the E-X2000 brand of Skybox cards is especially popular. They’re a premium type of cards that were loved primarily by those who preferred premium cards.

I love the purple-orange-red background, or rather, the border of the card, but also the golden letters on the bottom portion of the card, which makes it feel like a special one.

If you like the look of this card, the good thing here is that there are many available out there. There’s a lot of PSA 8 and PSA 9 cards, although getting a PSA 10 might prove to be a challenge! 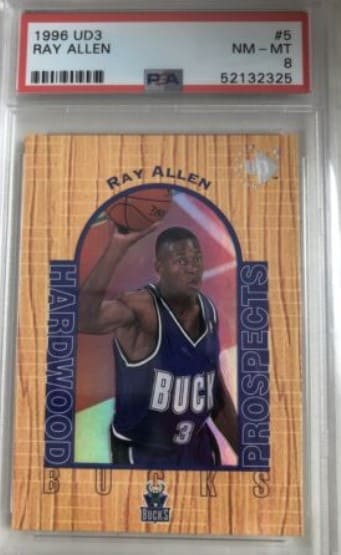 For those that don’t like shiny cards but prefer the more “wooden” look, the UD3 Ray Allen rookie card is the way to go.

These cards were typified by the wooden background which fits well with the “Hardwood Prospects” brand of cards created by Upper Deck.

This card also has some parallels that tend to go for a bit more than the base card. This particular card will sell for a few hundred dollars, while the parallels will go for significantly more, sometimes reaching the value of around the $1000 mark. 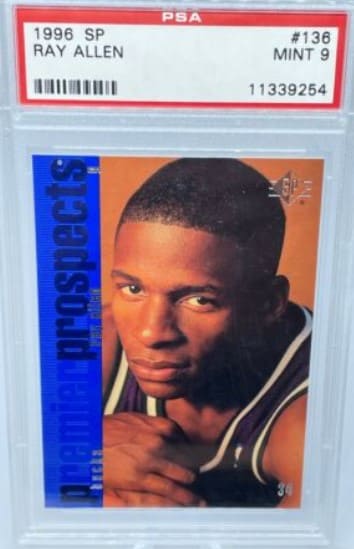 SP cards have their typical look with the blue banner on the left hand-side of the card, and a frontal image of the player stretched across the rest of the card. This Ray Allen card is not different.

In some ways, this card will feel like a premium card but perhaps the surprising thing here is just how inexpensive it can be.

Some cards of this type are selling for less than a hundred dollars, although the prices will always fluctuate according to the marketplace.

If you want an affordable Ray Allen rookie card that’s not particularly hard to get, then I recommend that you check this card out. 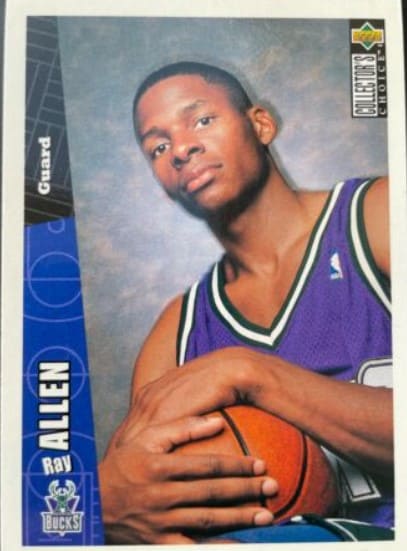 This Upper Deck Collector’s Choice is yet another great and relatively affordable option that you can consider if you want a decent Ray Allen rookie card that won’t obliterate your budget.

The card has a more casual feel to it, with Ray Allen posing for the photo with the ball in his hands.

It will still sell today, although most collectors will gravitate towards cards that had a different image on the card. This card is meant as an additional piece to your collection, and may particularly appeal to you if you’re a fan of Ray Allen.

Ray Allen still remains in memories of many basketball fans. He was hugely loved for his character, and achieved the heights of his career with the Boston Celtics.

So the choice when it comes to Ray Allen rookie cards is great, and there are many options that you can go for. If you want something a bit more premium, you can go for the Finest parallels, which will cost you a decent chunk of money.

On the other hand, there’s a lot of budget options, too.

Which Ray Allen card you’ll get depends on your budget and on your preferences, but you won’t run out of options with Ray Allen rookie cards.