Bryce Harper’s rookie cards from 2012 remain to be among the most popular baseball cards from the 2010s.

Despite being the first overall pick in 2010 already, he didn’t make his debut until 2012, which is when his card was inserted into most major baseball card products.

Since then, his cards have seen a climb in popularity that has prompted many card collectors to consider his cards.

If you’re one of them, these are the best Bryce Harper rookie cards that you need to be watching.

Let’s take a look at what the best Bryce Harper rookie card option might be for you. 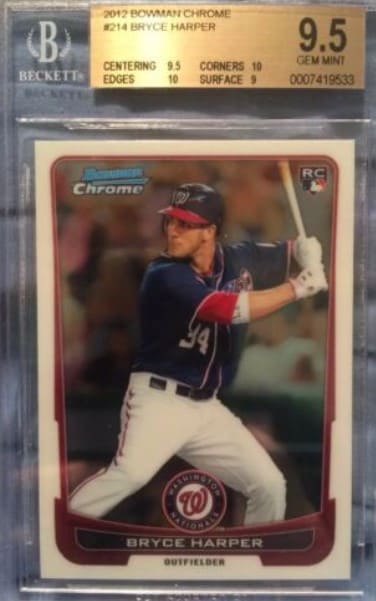 Let’s start off this list with a card you simply cannot ignore – the Bowman Chrome rookie card.

When it comes to baseball cards, there are not many other card companies that come close to the pedigree that Bowman Chrome has. It is one of the first choices many people consider when choosing a Bryce Harper rookie card.

Admittedly, this base Bowman Chrome card is not the most gorgeous looking card in the world, but it has its charm. You’ll be able to get it for a reasonable price and if you’re a budget collector, this might be the first option you’ll consider.

It features a simple design that gets the job done, although it’s not the most exciting card in the world.

However, if you do want something a bit more exciting, then you can look into the many different parallels of this card. 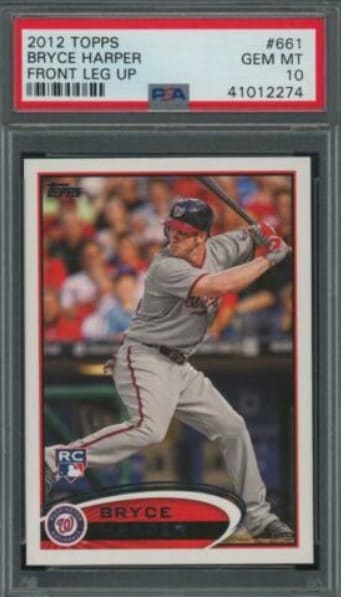 If you’re more of a Topps person rather than a Bowman person when it comes to baseball cards, then you’ll definitely like the look of this #661 Topps Bryce Harper rookie card.

This card is among the more widely distributed Topps cards – the “front leg up” card. It was widely available in most retail packs and is still hugely popular for collectors, because it’s a relatively easy find and not that expensive.

The other option when it comes to the #661 is the screaming card: 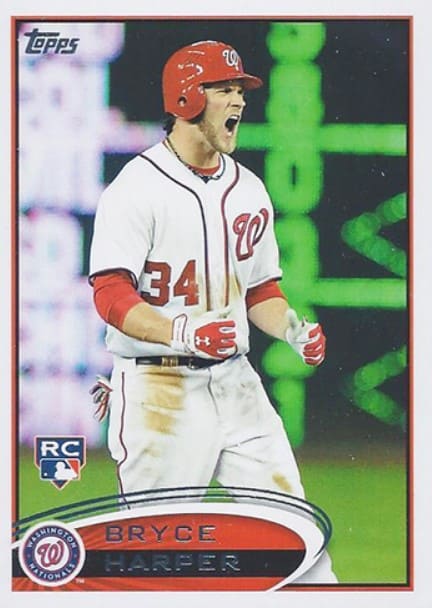 As you can see, the design is exactly the same as with the “front leg up” card. Again, this card was distributed in most factory sets and it’s available on the market today as a good alternative if you don’t like the leg up card. 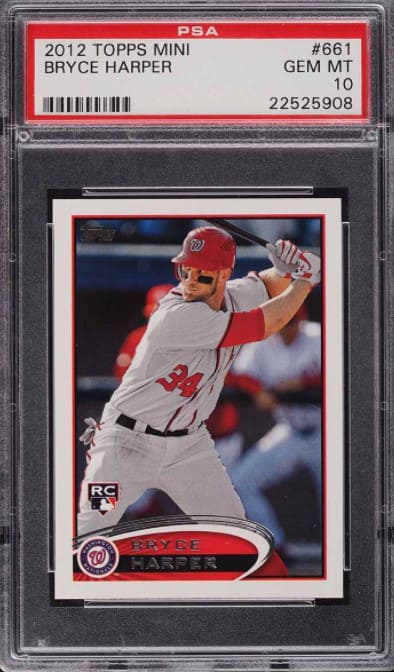 Another set that’s worth a mention when it comes to Topps cards is the Topps Mini card.

You’ll see that this card was made in a significantly smaller format than the base card, which led some people to consider this card as the “pocket” card.

This set of Topps Mini cards was created as a supplementing set for the base Topps cards, and it was meant to pay its respects for the first mini set that came out in 1975.

Initially, this set was an online-only set but it then got distributed to some local vendors, so many collectors were able to get their hands on this little beauty. Another thing that makes it popular is the many different parallels it came with – Gold, Silver, and Black, just to mention a few.

The small format is not for everyone, but this card is still a decent option if you don’t want to spend an extraordinary amount on cards just yet.

Now, another card that you might want to consider with this type of design is the autographed version: 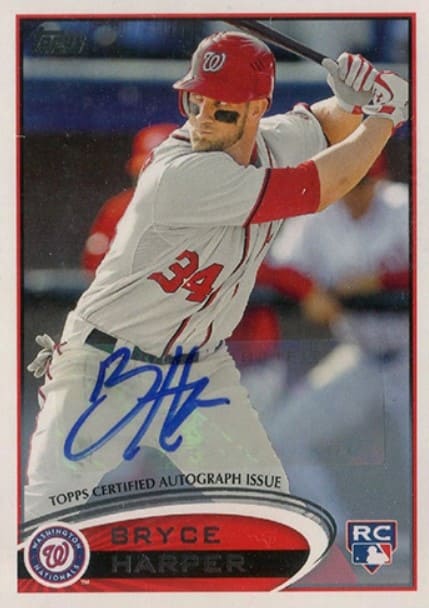 Admittedly, this card is not the cheapest Bryce Harper rookie card, but it was featured in a limited print run as a part of a giveaway to fans. It was given as a part of the Golden Giveaway and it was one of the main prizes given out to winners of the giveaway.

Given its short print run and relative rarity plus the autograph on the card, this version of the Topps #661 will be a bit more expensive. 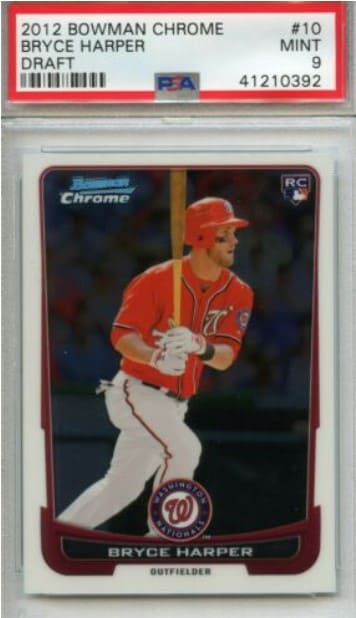 While we’re on the subject of Bowman Chrome Bryce Harper rookie cards, you’ll have many different options from this brand. One of the better ones is the Bowman Chrome Draft Picks card, which will mainly appeal to you if you’re on a budget.

You can see that this card has a nearly identical design to the base Bowman Chrome card – the only major difference here is the image on the card.

The Draft Picks card here might be even better for budget collectors than the base Bowman Chrome card, because it’s easily available and not that expensive, so it could be one of the first options you’d consider if you wanted a decent card that won’t blow a hole in your pocket. 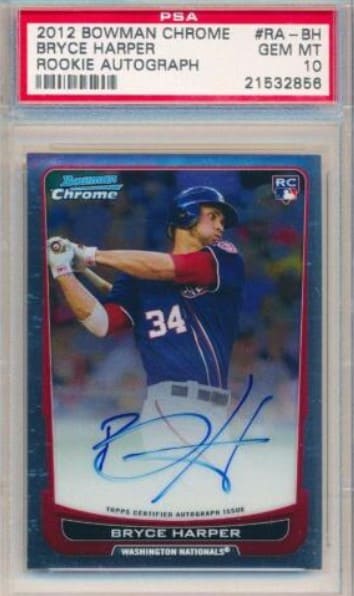 Now, this autographed card is a little bit more expensive than the two we’ve just seen, which is to be expected.

Firstly, because of the autograph on the card but also due to the fact that this card has a very low population count.

Again, you’ll still notice the basics of the 2012 Bowman Chrome card design, with the border around the card being in blue. The image is different here, as he’s wearing the blue jersey, and of course, there’s also the autograph.

If you’re looking for something a bit more premium and rare, then this card could be a decent option considering you don’t want to spend an extortionate amount, but still have a card that’s a bit more special than those base cards. 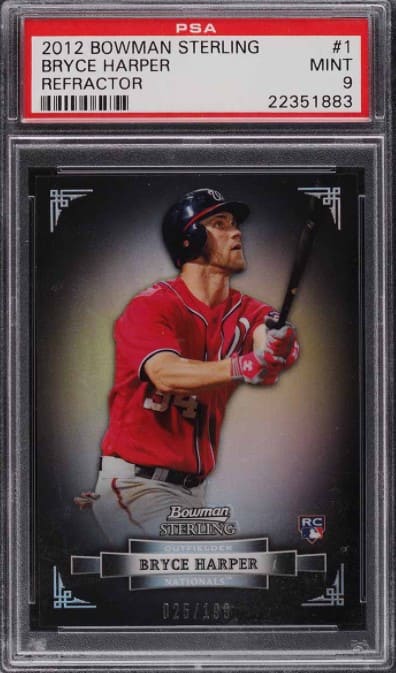 The fact that Harper was included as the #1 card in the Bowman Sterling set speaks volumes about the huge expectations placed on his shoulders when he arrived.

It’s fair to say he justified those expectations in the next few seasons.

As for the Bowman Sterling card, it’s one of the more mainstream choices when it comes to Bryce Harper rookie cards, and hugely popular because of the brand name, but also because of the limited nature of these cards.

You’re getting a card with a serial number here that can still be considered a budget option, which will appeal to many of those collectors that want something a bit special. 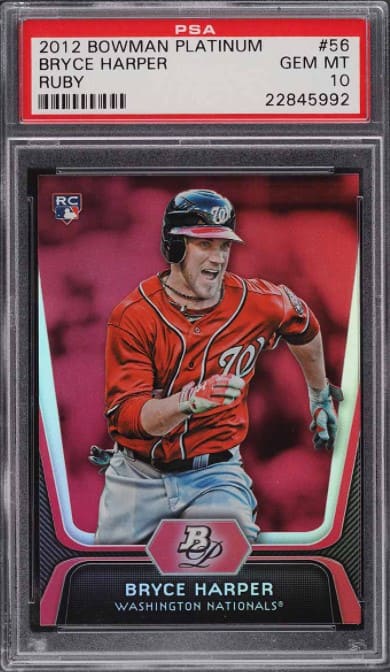 Ok, I promise this is the last one. 🙂

This card will hit home with those who want a bit more shine on their cards. Bowman Platinum cards have a bit more of a premium feel to them, and that’s amplified even further by a massive collection of parallels you can choose from.

This particular parallel in the image is the Ruby parallel, which is actually one of the more modestly priced cards out of all the parallels.

Some other options you have include Blue National Promo, the base card, Green, Holo, Gold, and several others.

Now, this card is right in the middle between premium-priced cards and budget cards. However, it will depend on the parallel you’re choosing – some will be more expensive than others. Ruby, for instance, is among the more affordable ones. Blue National Promo, on the other hand, will be a tad more expensive. 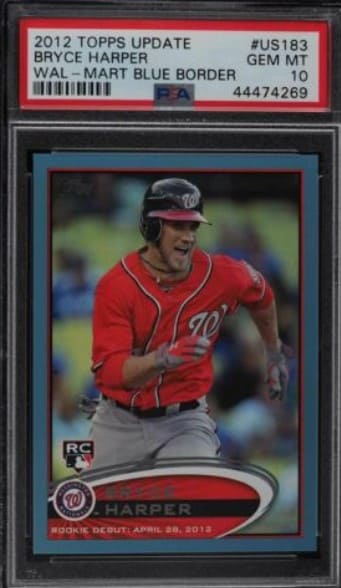 Back to Topps it is, then!

Topps Update has released some amazing cards in the past, including Mike Trout, Aaron Judge, and some other great players – Bryce Harper is most certainly among them.

The interesting thing about this card is just how popular it was when it was first released in April 2012 in the Update pack. Despite the fact that it doesn’t have a short print run, this was one of the hottest cards of 2012, and thus a bit more expensive.

If you’re finding it tough to find the original Topps Harper rookie card, then this one is a great alternative that you can consider.

It still has that amazing Topps design, and it also has a lot of different parallels that you can consider, which is great since some collectors will want a bit more variety in their cards. 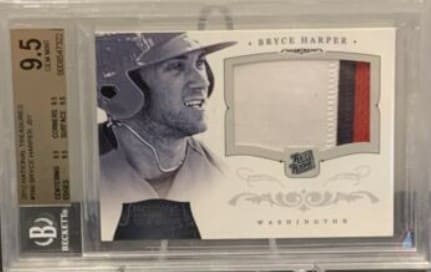 If you’re a premium card collector, then you know the deal: National Treasures card will be the central card brand if you’re looking for cards with a bit more value to them.

As always, this card doesn’t disappoint with its design, as you’re getting an elegant, white design that’s a bit understated, but that’s exactly what makes it special.

It also has a limited print run of only 99 cards and a patch of the jersey on the card, making it an excellent option for those who are able to spend a bit more.

Of course, all of that design and the premium feel also come at a premium price. You should expect to pay a much higher price when compared to the Topps and Bowman rookie cards, but that is to be expected with National Treasures cards anyway. 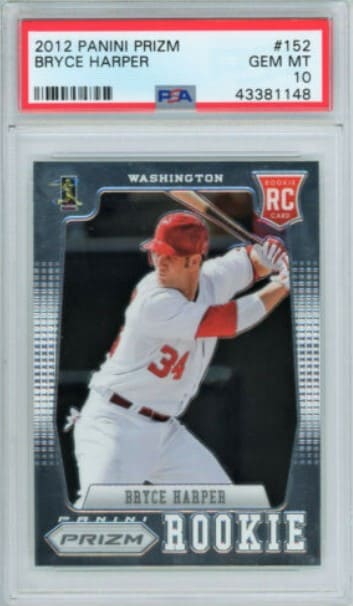 In terms of baseball cards, Panini Prizm is the third-largest mainstream card company, and this is the 2012 iteration of the Bryce Harper rookie card.

This card is a great option if you like Panini Prizms, but more importantly, if you’re looking for one of the many colorful parallels that come with this card.

The only thing that might bother some people is the fact that it wasn’t released until 2013, but it’s still considered as his rookie card, just not his earliest rookie card.

So, those were some of the best and most popular rookie cards from 2012, but there are also some great alternatives if you want something even earlier than that. 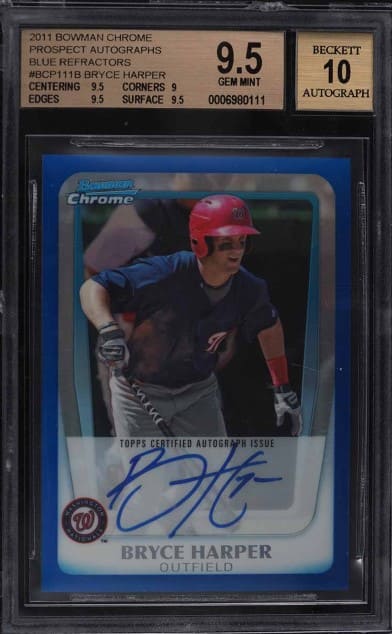 This card is one of the, if not the most, expensive Bryce Harper cards currently selling. It’s not his rookie card, but it comes from his college years when he was considered a top prospect who’ll shine in the major league one day.

And that’s exactly what happened.

Adorning the card is the on-card autograph of Bryce Harper and of course, the typical Bowman Chrome design. This particular card is the blue parallel, which is seen by the blue border around the image of the card.

Definitely one to watch but be prepared to spend a bit more for this one. 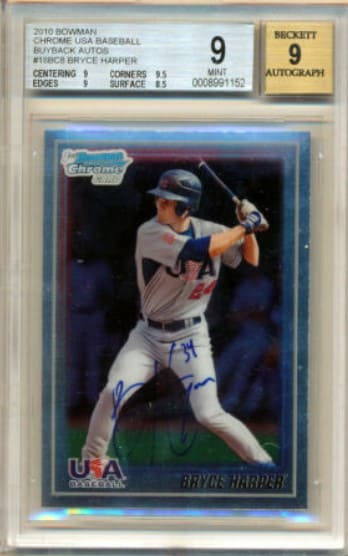 The 2010 Bowman Chrome USA Buyback card is an excellent option if you’re looking for a great card that carries a lot of potential and value with it.

It has an on-card autograph and it features Bryce Harper in the US national team jersey, which will appeal to US collectors out there.

It’s hard to come by this card, though, because of its limited, 100-card print run and it also comes from Harper’s draft year, which will only further increase the value of this card. 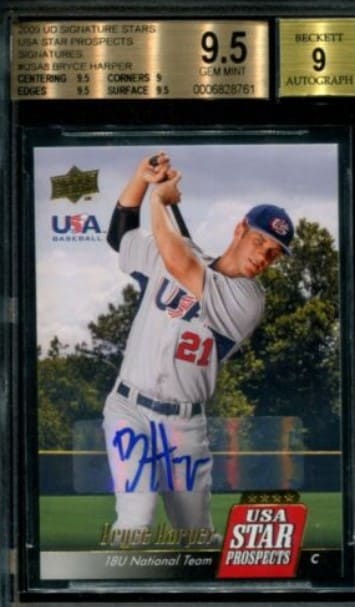 This is one of the earliest, if not the earliest, Bryce Harper rookie cards. It has Harper in his US national team apparel again, and it was made when he played with the U18 baseball team.

This card also has a limited print run and it has an autograph, which will further increase the price – and pair that with the fact that it comes from 2009, and you’ve got one of the most expensive Bryce Harper cards currently selling.

Bryce Harper is one of the best baseball players of the 2010s, which is why his cards will do very well for many years to come, which makes it a great investment for the future.

You have many different options, whether you like true rookie cards or cards that come from an even earlier part of the player’s career.