Best Eric Lindros Rookie Card Options Eric Lindros was one of the best hockey players from the 1990s and the early 2000s. Despite that, his rookie cards still attract a lot of attention from card collectors.

He’s one of the fan favorites of the Philadelphia Flyers, which means that fans of this team are always going to look for the best Eric Lindros rookie card.

Aged just 16 years old, Lindros burst onto the scene in 1990 and entered the draft as a first overall pick in the 1991 draft, when he was chosen by the Quebec Nordiques.

There are also some great cards from the minor leagues that we’re going to cover here, and these are particularly popular with Canadian hockey card collectors.

Let’s take a gander at what the best Eric Lindros rookie card options are.

These are the best Eric Lindros rookie cards you can get right now. 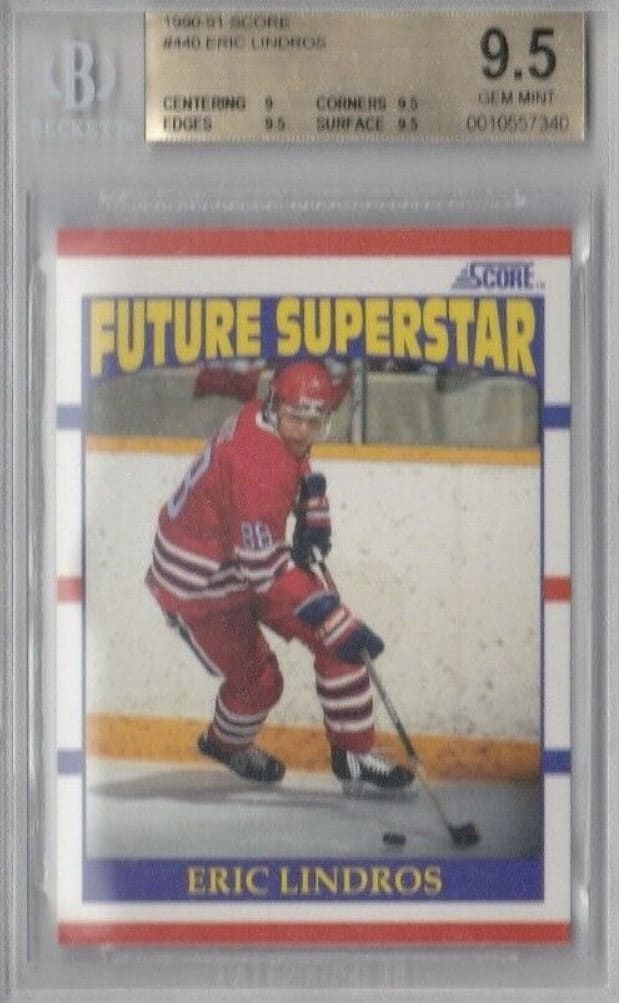 The Score Eric Lindros card from the 1990-91 season is one of the biggest and most popular rookie cards of that year.

That’s partly because the Score card is the main mainstream card for this player, but also because the popularity of Lindros rose quickly after being drafted as a first pick.

Back in the 1990s, there was no abundance of cards as we know it today. You generally had only a handful of options, and there was always that one mainstream card that was the go-to card for the vast majority of card collectors. For Lindros, it was the Score card.

That’s because he signed a deal with Score before he even signed with the NHL team, so this card came out as early as the start of the 1990-91 season. It was also the only mainstream card of Lindros to come out that year.

On the card, you’ll find an action image of Lindros looking to pass the ball to a teammate. The overall design of the card is very 90s, with the red and blue stripes on the border of the image and the square wording that is found beneath the image. 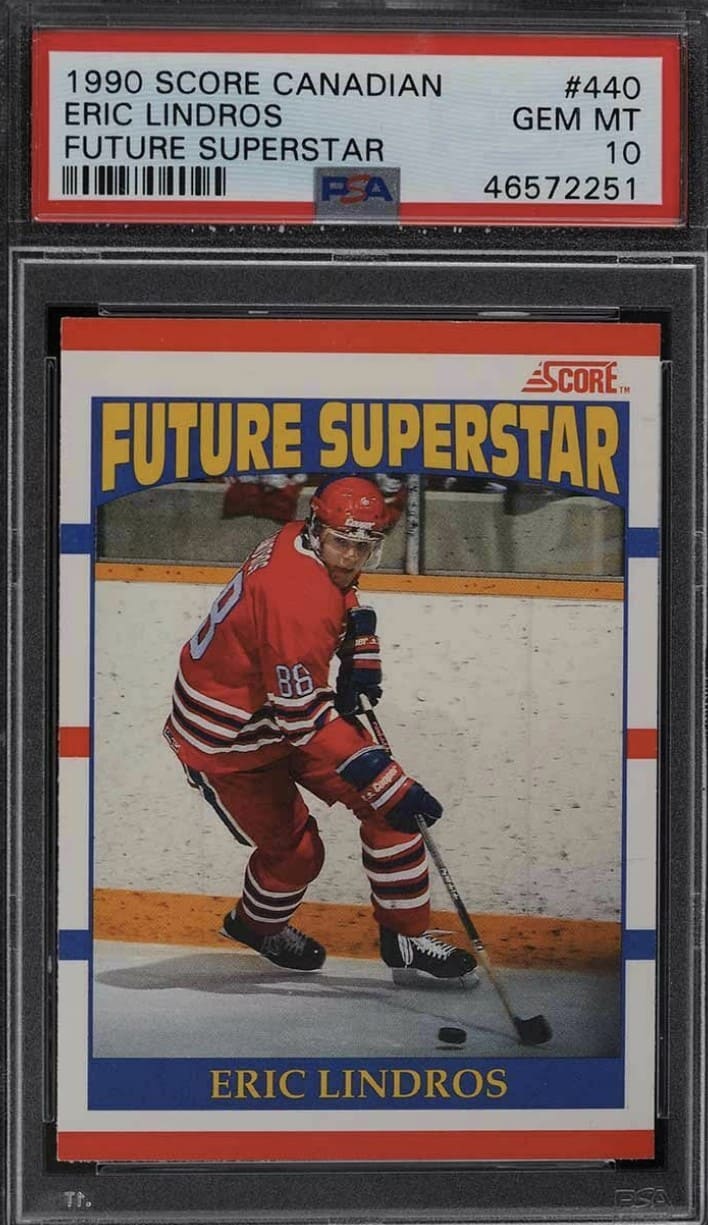 Now, if you take a look at this Canadian version of this Score card and the American version, you might not notice any major differences between the two. In essence, it is the same card, barring just a few minor details.

Firstly, you’ll see that the Score logo in the top right corner is red for the Canadian version, while on the US version, the logo is blue.

If you’re looking for the best Eric Lindros rookie card, then your choice has to be either of these two cards – the Canadian Score version is more popular with Canadian collectors, but the US version is the more mainstream option of the two. They cost roughly the same, though. 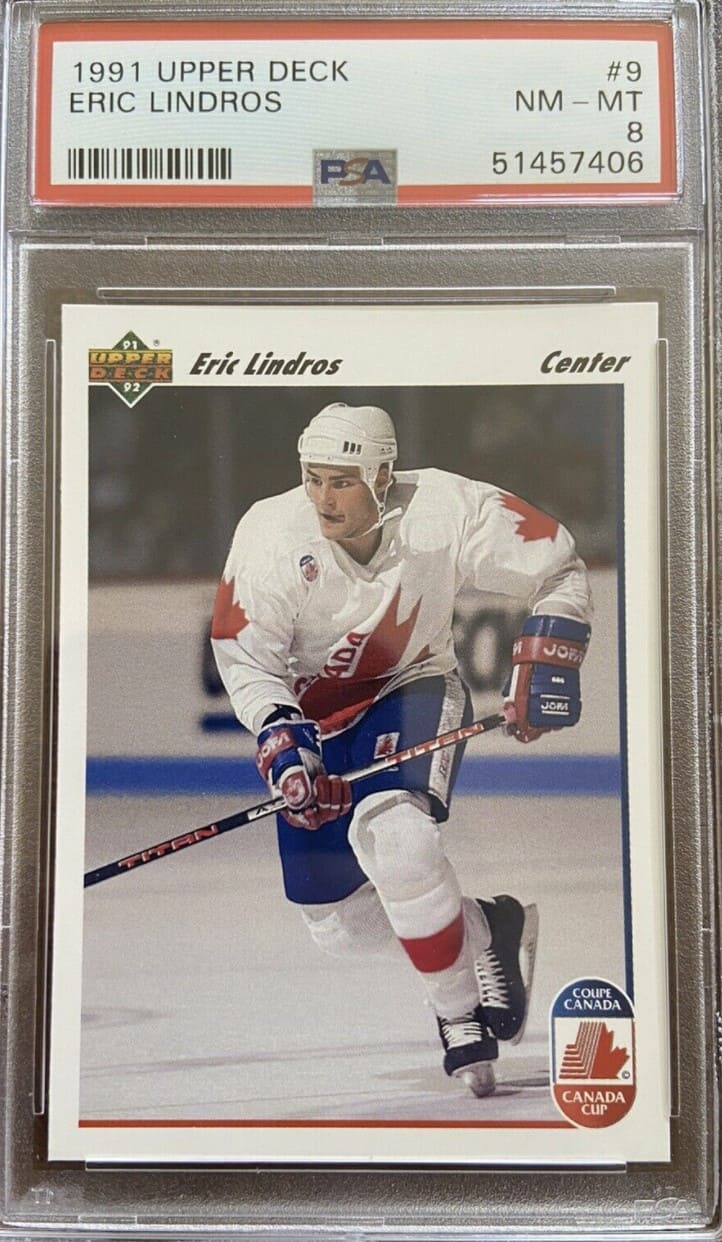 Now, this Eric Lindros Upper Deck card might not be the earliest version of his rookie card, but it’s interesting because of a couple of things.

Firstly, it was due to the fact that Upper Deck was still establishing itself as a major card company as we know it today. It started producing hockey cards in the late 1980s and this Eric Lindros card was to be the pinnacle of its beginnings. There was quite a lot of popularity for this card.

Secondly, it’s arguably the biggest alternative to the Score card, so if you don’t really like the look of that, you might consider this one instead.

Upper Deck is well-known for its Young Guns hockey cards, and perhaps it’s a bit surprising that they didn’t include Lindros into that line of cards. It might be even slightly disappointing to some collectors – however, it’s not a big deal to the majority of people.

In terms of value, the Upper Deck card is slightly behind the Score versions of his rookie card, but still a popular alternative. It’s a decent card to add to your collection, but it’s not likely that you’re going to have any major profits with it. 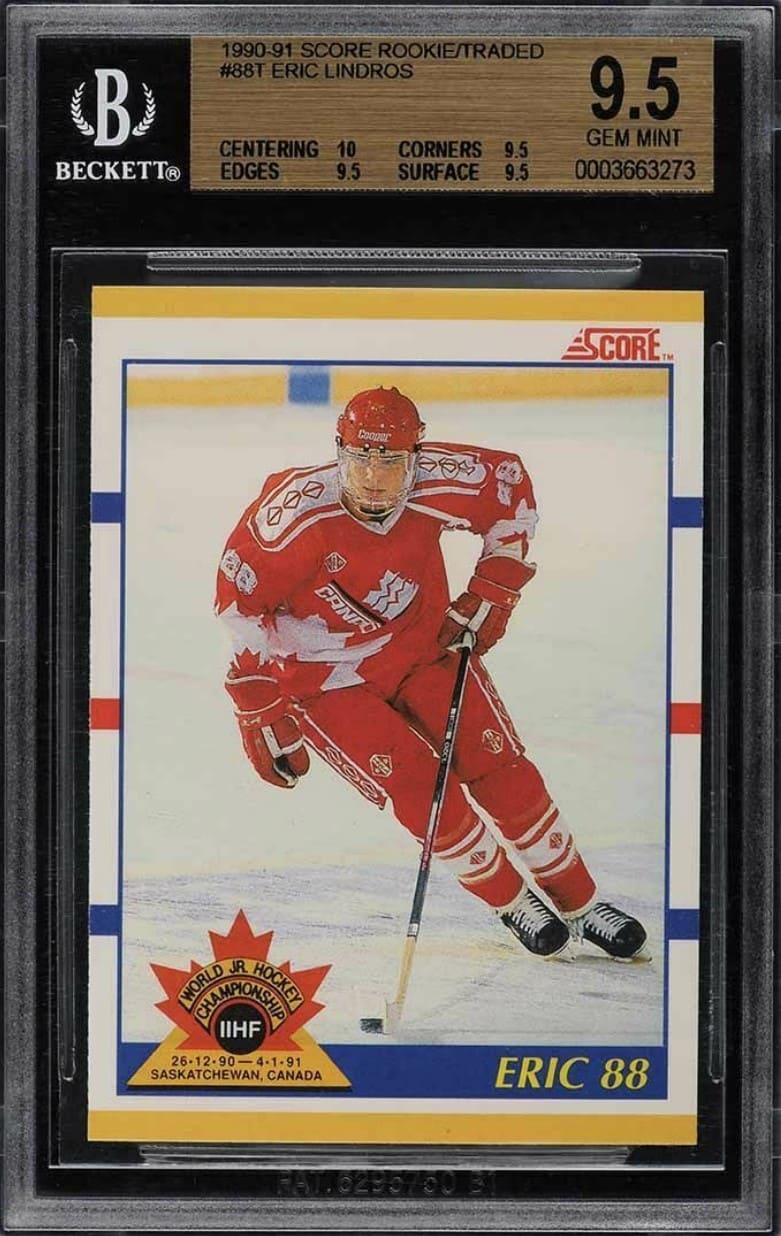 Some say that this Score Traded card of Eric Lindros is his best rookie card. That is especially true for Canadian card collectors, who will love the fact that Lindros appears in Canada’s apparel on this card. It’s a sneaky investment if you can find a good deal because this is one of the most underrated Eric Lindros rookie cards out there.

It might be a bit tougher to find than the other three cards we’ve just seen, but if you’re a Canada team fan, then it’s going to be the one you’re going to like the most. Not that it’s rare, but definitely a tougher find than Score cards.

As you may see from the card, this one was a part of the World Jr. Hockey Championship that was held from December 1990 and January 1991 which Canada won. Eric Lindros was the second-best scorer in that tournament, winning his team 17 points (6 goals and 11 assists), placed only behind Doug Weight.

Overall, this is a great card to own if you’re looking to add to your collection, particularly if you’re from Canada or you support the Canada hockey team. 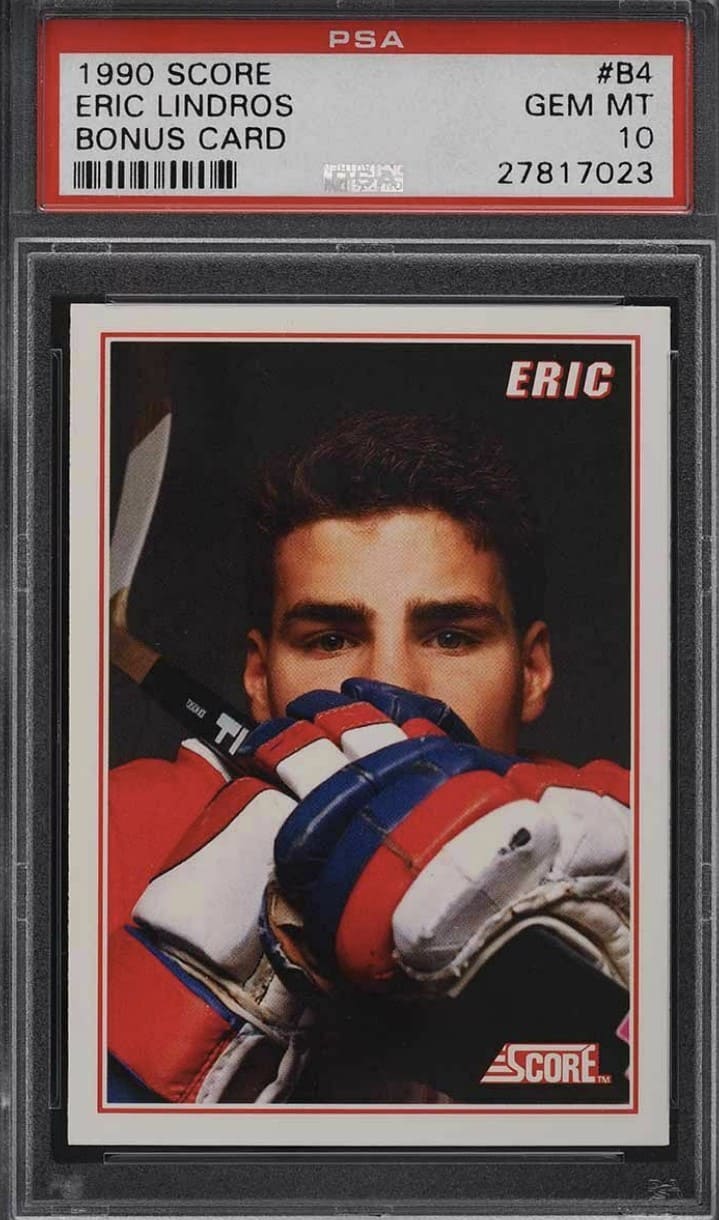 If you’re looking for something extra and different from the base rookie cards, then you might want to consider the 1990 Score bonus card, which was given out as a bonus card in addition to the main cards from the set.

This was yet another card that catered to the whole population of people who were looking for Eric Lindros rookie cards. It turned out that his card was among the most popular Score cards initially, and the company decided to release a bonus card that would reward the loyal collectors.

The good news is that it’s still going strong in terms of supply, as you’ll probably see from the many listings out there. It’s also not that expensive nowadays, so if you’re looking to add another simple card to your collection, this one might be a great addition. 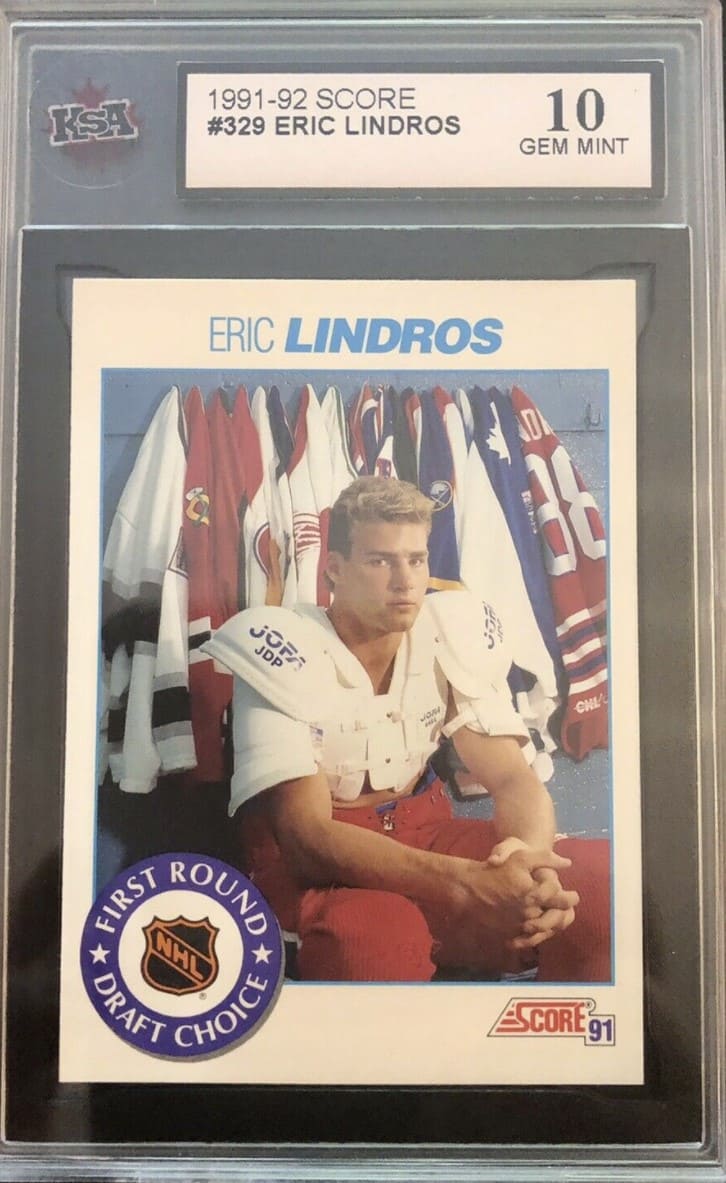 Now, this Score card is from 1991 and is sometimes considered as a rookie card of Eric Lindros, despite the fact that another Score card came out in 1990 already. The sign in the bottom left corner of the card is particularly interesting – it says “first-round draft choice”.

Some people believe that this is his true rookie card, but the majority of collectors look towards 1990/91 as the rookie card. Despite that, this card has also gained quite a lot of popularity, especially due to the fact that it has that mark in the left bottom corner.

Even though it may not be the true rookie card of Eric Lindros, this is still a highly popular option for those who love Lindros and want to collect his cards.

It’s also relatively affordable and still found even in the best conditions (as seen in the image above) – in that case, the card can cost several hundred dollars. For lower-graded cards, this might not be as expensive, which makes it a great option if you’re tight on a budget and are looking for a good hockey card to add to your collection. 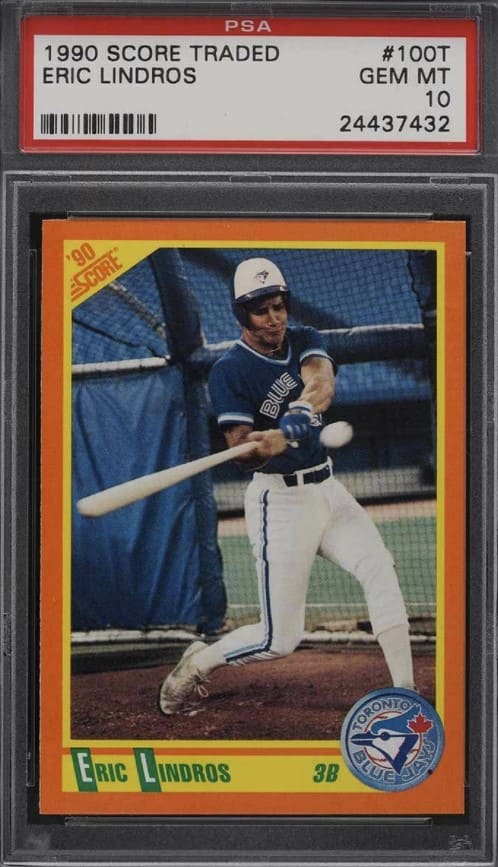 Eric Lindros as a baseball player? When did that happen?

The fact here is that Eric Lindros never really played baseball, although there is still a baseball card that is found in the Score Traded pack from 1990. How is that possible?

Well, that was mainly because of Lindros’ deal with Score, and the company tried to push Eric Lindros and increase his popularity by creating as many cards as possible. This meant that they tried to create an Eric Lindros card in baseball with the Toronto Blue Jays, which garnered quite a lot of attention initially when it was released.

He was never really close to becoming a baseball player with the Toronto Blue Jays. He took a few batting sessions with the team, but never really got going as a professional player. One of those sessions involved his photoshoot for the card.

The card turned out to be quite a success, as it gathered a lot of attention initially and many collectors, even baseball card collectors, looked to get this set solely for this card. 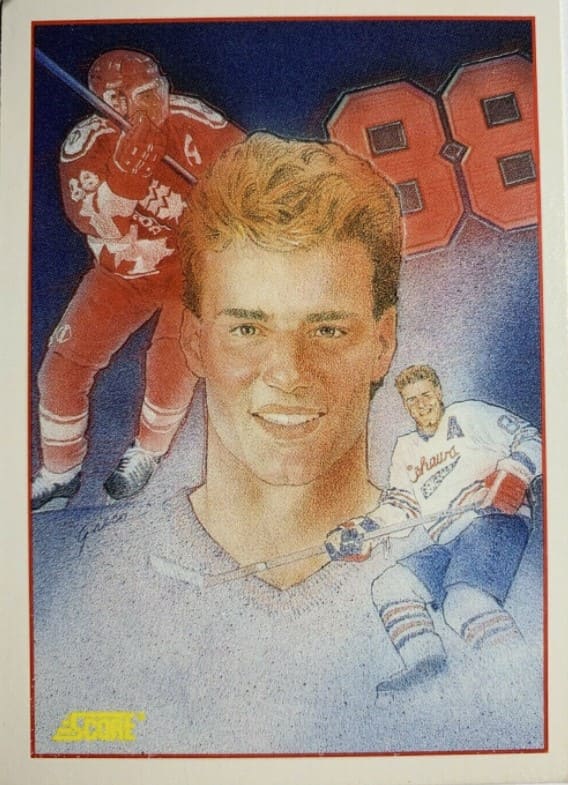 Another piece of collectible that we might need to mention from 1990 is this card with a painting of Eric Lindros on it.

It’s yet another creation that took place due to the contract that Lindros signed with Score, and it was meant to portray Lindros as one of the best young players currently out there.

This is a great addition to any hockey collector’s collection, because it is relatively rare, especially when compared to other cards here. It’s also rarely seen as a graded card, so you might struggle to find a good version of this card with a good grade.

If you’re looking for a good Eric Lindros rookie card option, then you don’t really have that many choices available to you.

That’s because the card collecting business back in the 90s wasn’t as well developed as it is today. There weren’t any shiny options or parallels – especially in the hockey card collecting world, that is.

This meant that most collectors had to look for rookie cards of the major, mainstream companies.

It’s also worth mentioning that the Junk Wax era was in full effect when Eric Lindros cards started coming out, so the print runs for these cards were a lot higher than the demand for the cards. This resulted in slightly lower card prices than they normally would be, which was particularly true for basketball cards, but also for hockey cards.

For that reason, you’ll probably have no major problems finding a good Eric Lindros rookie card.

But you should also not expect these cards to be a true investment like most cards coming out nowadays – instead, most people looking for Eric Lindros rookie cards are looking for new cards to add to their collections instead of making a profit on them.

Eric Lindros remains in the hearts of many hockey fans, particularly Canada fans and Philadelphia Flyers fans. Because of his stellar career, Eric Lindros’ cards remain to be highly coveted and the demand for these cards is still rising. The good news is that if you’re looking for an Eric Lindros card, you probably won’t have any problems when it comes to finding a card of this type for a relatively sensible price.