Looking to get yourself a nice Wander Franco rookie card? Then you’ve come to the right place. We’ll guide you to help you find the right card for you.

Franco was considered a top talent in the 2017 draft, and his talent became clear in the coming seasons as he was beginning to become considered the best prospect in the league. That’s why these cards are particularly worth taking a look at.

You’ll find some nice bargains on this list which should be a great addition to your Franco collection. 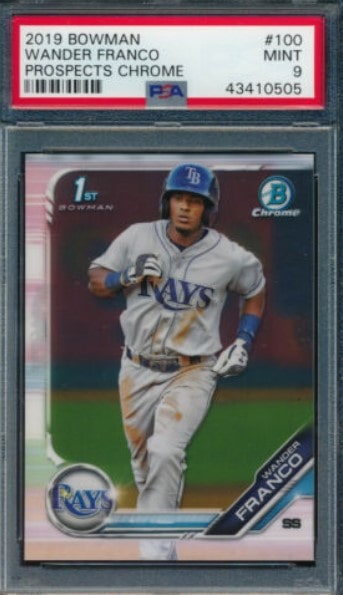 The Bowman Prospects Chrome brand has been one of the best modern-time card companies for rookie cards. We’ve seen hundreds of cards by this provider ever since the 1990s, and they’ve covered some of the best athletes, especially in baseball.

So if you decide to get this card, you’re getting one of the best rookie cards of Wander Franco – or of any player, for that matter. It’s also Franco’s most popular rookie card up to date, which also makes it the most valuable base card.

The great thing about this card is that if you get it early enough, there are some real bargains to be had on the marketplace. That’s why investing in the Bowman Chrome Prospects card makes sense if you’re looking for a safe and steady investment that will last you for several years and maybe even decades.

For now, this card is a must-buy if you’re looking to get your Wander Franco rookie card now. It’s relatively inexpensive, and it’s looking like a great investment for the future. The base card is easily available and also in the highest grades possible, so it’s wise to take some time to make your pick.

As for parallels, you have many options here. The most popular parallel of this card is the Refractor version, which is quite a bit more expensive than the base card, but worth it if you’re after premium cards. This is how the purple refractor looks like: 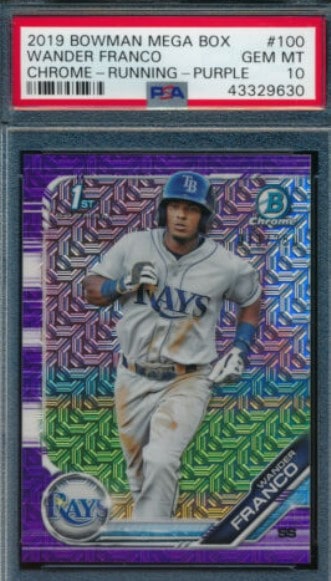 Along with the base refractor and the purple refractor, you have other parallels to choose from: Blue, green, green shimmer, gold, gold shimmer, orange, orange shimmer, red, red shimmer, black shimmer, and SuperFractor.

Obviously, the SuperFractor will be the most expensive one because there’s only one card of this type, while there are only 5 black shimmers produced, so you might have to spend significantly more to get some of these parallels. 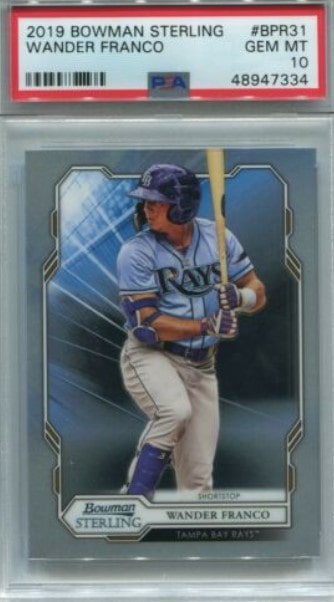 Bowman Sterling is the next well-known company for rookie card collectors. It’s seen many different rookie cards ever since the 1990s and perhaps even earlier. So you know exactly what you’re getting here with this Wander Franco rookie card – a reliable long-term investment that’s going to age like fine wine.

Nevertheless, this card will remain to be one of the top rookie cards of the 2019 year. The base card will be widely available to most card collectors. 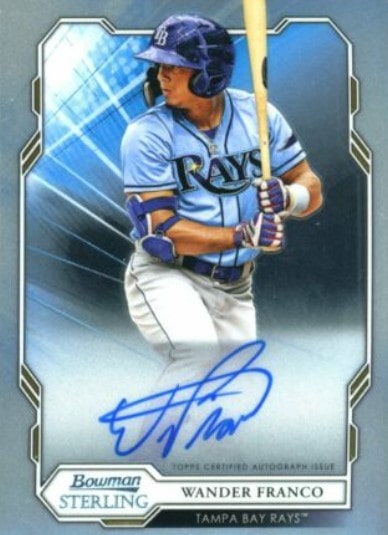 The interesting thing about the autographed card is that it says “Congratulations” on the back. Other than that, it’s the same card as the base card, except for the autograph, of course.

As for which card you choose for yourself, it completely depends on you, your preferences, and your budget. If you want an entry-level card for a relatively small investment with huge potential, go for the base card. However, if you want something a bit more premium that will cost a bit more, go with the autographed version. 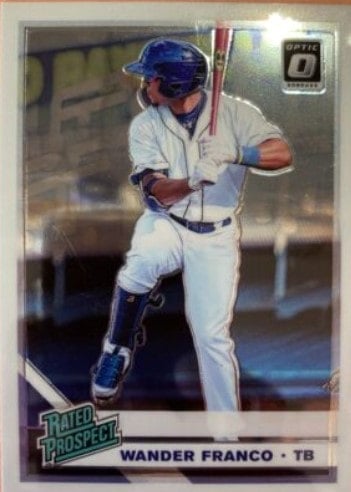 The next option you have is the Panini Donruss Optic Rated Rookie card of Wander Franco. This is a great bargain in our opinion, at least for the time being. Even though this card is not as widely available as the other two rookie cards we’ve mentioned, it’s still quite inexpensive, and it represents a great chance to get a huge ROI.

It’s a hugely underappreciated card, this one, as many card collectors just seem to ignore it when talking about Wander Franco rookie cards. Sure, it doesn’t have as wide appeal as the Bowman Chrome card, for example.

But Panini Donruss Optic Rated Rookie has always been an important player in baseball rookie cards. You’re still getting a reliable card here and you shouldn’t take it for granted. It features a cool-looking photo of Wander Franco batting, although it doesn’t show his face, which some collectors might miss.

One of the main problems with this card is its availability. You won’t find it in auctions as often as other cards pop up. This means you’ll have to go for ungraded cards or go for cards that have lower grades. But some of these should still be ridiculously inexpensive and might be worth a shot owning one of these to see where it takes you. 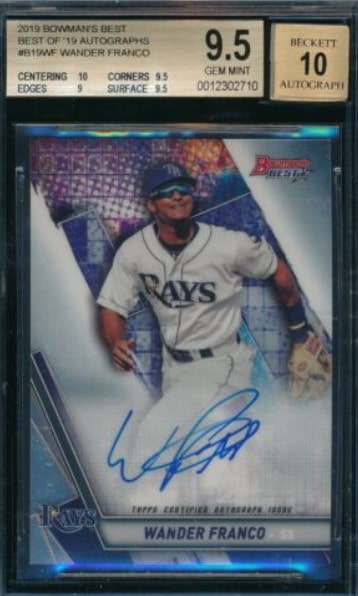 The Bowman’s Best autographed card is the premium card out of all the Wander Franco rookie cards. It’s perhaps the most expensive out of all the rookie cards of this player, although not as widely popular as the other cards we’ve just mentioned…

However, it’s also arguably the best-looking card out of all the options we’ve seen so far. Along with the attractive image of France in action, it has a premium-looking background which will appeal to those who like more graphically developed cards.

And then there’s also the autograph, which only increases the value of the card. This is only for those who can afford to take an initial investment but are looking to increase their earnings in the next few years, hopefully. It could be a legendary card to own.

So it might be a great idea to get your Wander Franco rookie card as early as possible to avoid the hype when he starts dominating the league.

As for which cards you should go for, the Bowman Chrome rookie card does and will always hold value, no matter how well his career progresses. This card company is one of the most reputable around, especially when it comes to baseball cards.

If you want something that’s a bit underrated and with a huge potential for the future, you can opt for either the Panini Donruss Rated Rookie card, or for the Bowman Sterling rookie card. These two are inexpensive at an early stage, but are likely to grow in value in the years to come.

If you want a premium card, then take a look at the Bowman’s Best card. This one will be the most expensive out of all the Wander Franco rookie cards, but it’s worth it if you can afford it, that is.

Whatever your pick is for the Wander Franco rookie card, the general advice seems to be to buy as early as possible and hold the card and hope that it increases in value as much as possible. Trading might not be viable at the early stages of his career, because the prices will start to fluctuate.

Franco was born in 2001, so he was picked when he was aged only 16. This meant that Franco was to play with Princeton Rays from 2018 onwards to get prepared for MLB. But even at 17, he was named the Appalachian League Player of the Year after his impressive performances.

In 2020, Wander Franco was touted to be the best rated rookie out of all the rookies, so the expectations are great for the Dominican shortstop. Even at his ripe age of just 19, Franco became one of the hottest prospects in the 2000s era of baseball.