Like him or not, Tiger Woods is one of the biggest sporting legends of the modern era.

For a golf player, he’s attracted a lot of attention when it comes to his cards. Golf doesn’t get that much attention from card collectors, but the presence of such a star like Tiger Woods has turned some heads.

There haven’t been many annual and regular releases of golf cards over the years, so the majority of the cards we’ll cover here will be one-offs.

Many of these cards are produced by Upper Deck, who has a license with Tiger Woods for producing sports cards.

With that in mind, let’s take a look at some of the best Tiger Woods rookie cards, and the rest of his cards as well.

Now, the official rookie year for Tiger Woods in the PGA was 1996, but you won’t find many cards from that date.

Many of Tiger Woods rookie cards come from 2001. 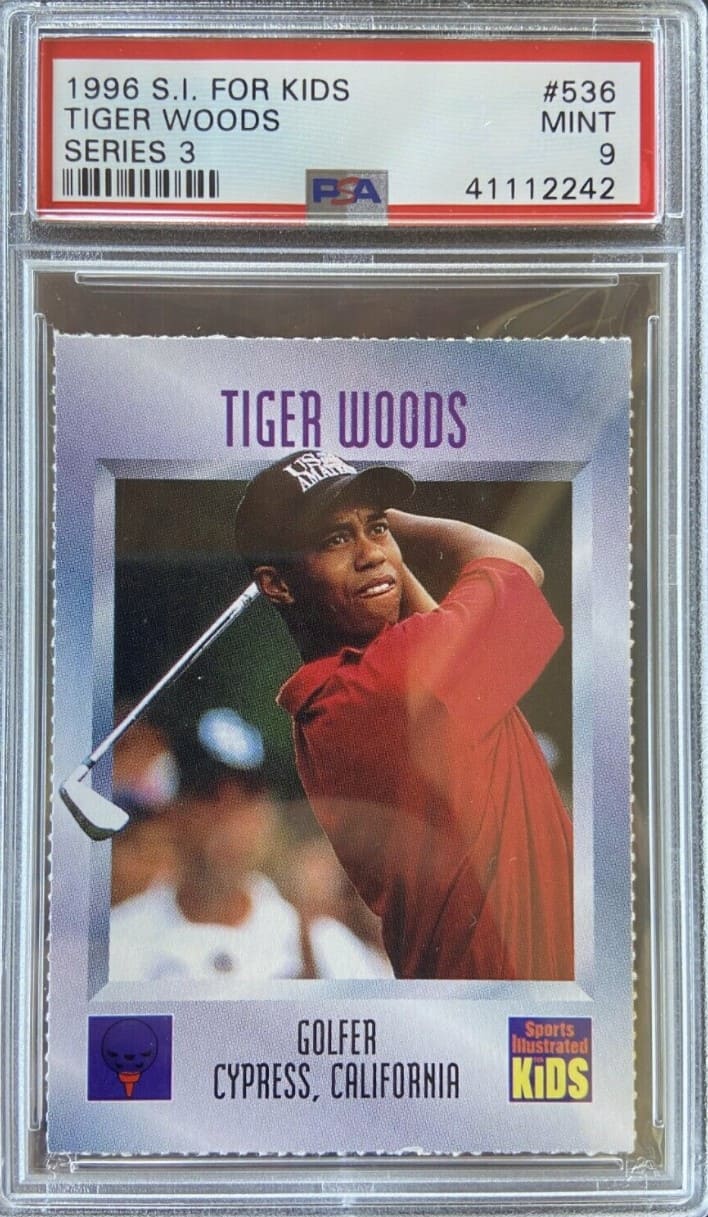 If there was a rookie card for Tiger Woods, then the Sports Illustrated card from 1996 would take all the credits…

The problem is that this card is often not seen as the true rookie card because it wasn’t released by one of the major card companies.

Instead, it was released by Sports Illustrated for Kids. This card was a part of a nine-card sheet that was typical for SI for kids. These cards contained some of the most famous sportspeople at the time, and they decided to include Tiger Woods in December of 1996.

It’s quite a rare find, this card.

In addition, it is often pestered by conditioning problems.

The card was included in a card sheet, which meant that cards had to be torn away from the sheet if you wanted to have an individual card.

This sometimes resulted in the tearing of cards, leading to many problems when it comes to the edges of the card. That’s why it’s incredibly hard to find cards like this with a high grade – and if you do find one, it will usually sell for high amounts.

Cards of this type with the best grades can cost several thousand dollars. 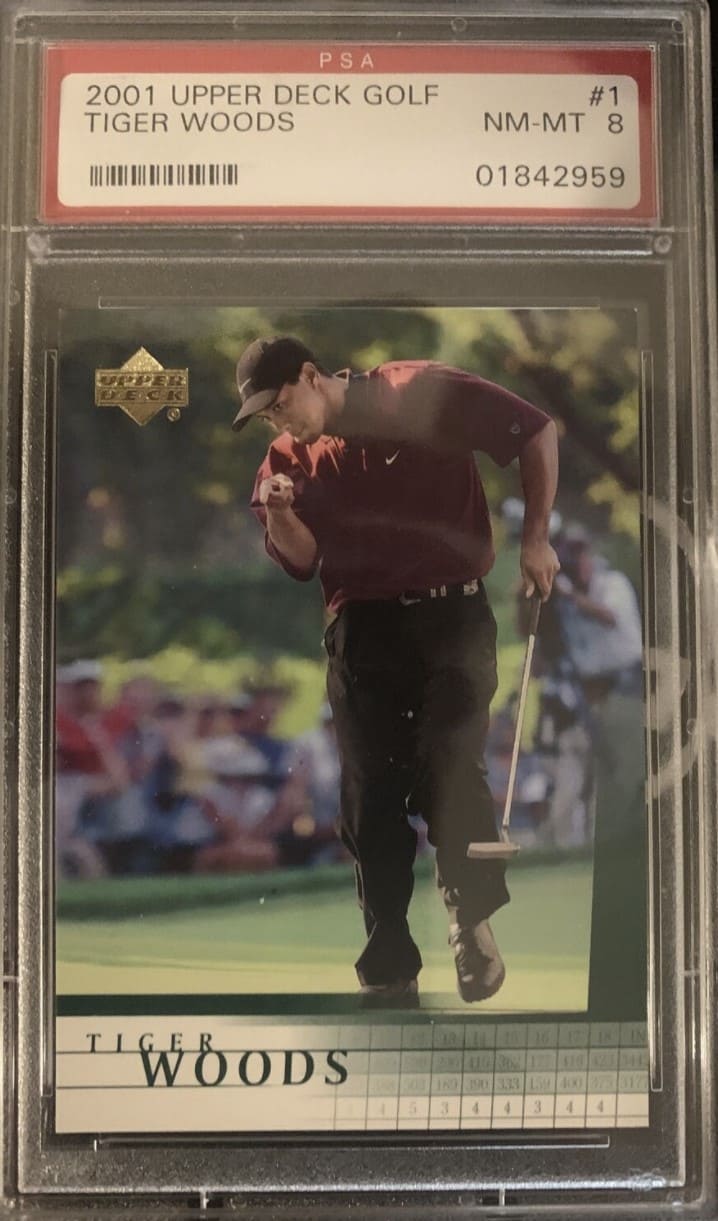 This is probably the most famous Tiger Woods rookie card of them all.

After Tiger Woods signed a contract with Upper Deck in 2001, it became clear that Woods would become the face of the company.

Instantly, the card gathered a lot of interest. Card collectors and golf fans went crazy for this card, although the higher print run enabled most people to get their hands on their favorite Tiger Woods card.

With years though, these cards became rarer and rarer on online marketplaces, which means that prices for the card can sometimes be quite steep.

Expect to pay a premium for this card if you’re looking to get the highest grades possible. Even then, you’re going to have your work cut out by the competing card collectors trying to get a good deal for themselves. 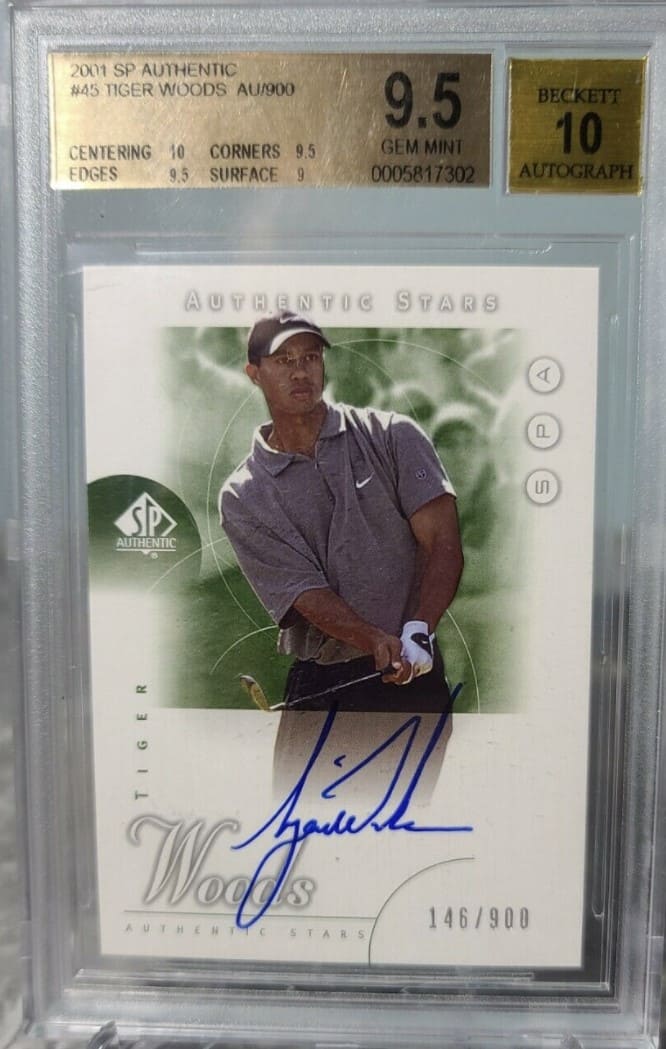 While the Upper Deck rookie card of Tiger Woods was made for the masses, the SP Authentic card was marketed to a more premium-minded audience.

The card had an on-card autograph and of course, a limited print run of 900.

This card is considered to be one of the most significant Tiger Woods rookie cards because it is one of the rare cards that are branded as actual rookie cards. The reason for this is because it was part of a base SP Authentic set.

But even though it was a part of a base set, this card can cost dozens of thousands – and potentially hundreds of thousands in the best possible conditions. The charm of the autograph and its limited quantity will increase the prices significantly.

Now, there’s another interesting card that we should mention here, and it is the Gold parallel of the SP Authentic card: 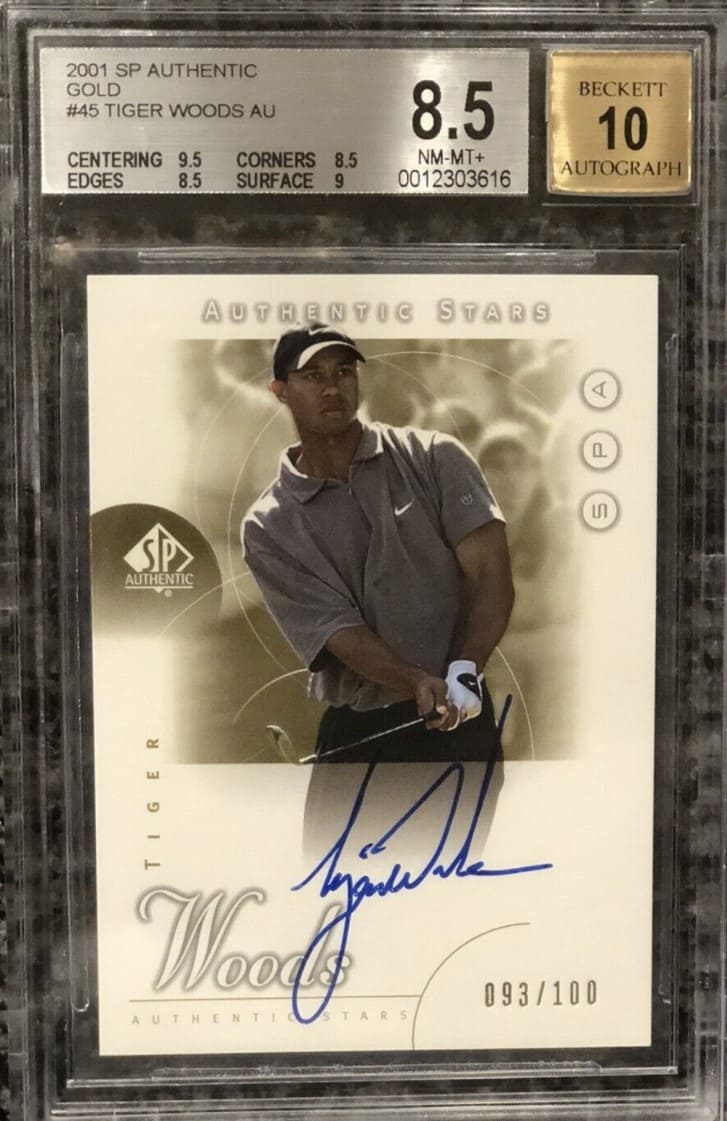 This particular card had a limited print run of only 100 cards, and the main difference is that the card has an all-gold background as compared to the base card.

Because of the limited quantity of this card, it is known to be one of the most expensive Tiger Woods cards overall – not just rookie cards.

You’re going to have a tough time finding this card in the top conditions, though, and if you do manage to find one, expect to pay a big, big sum… 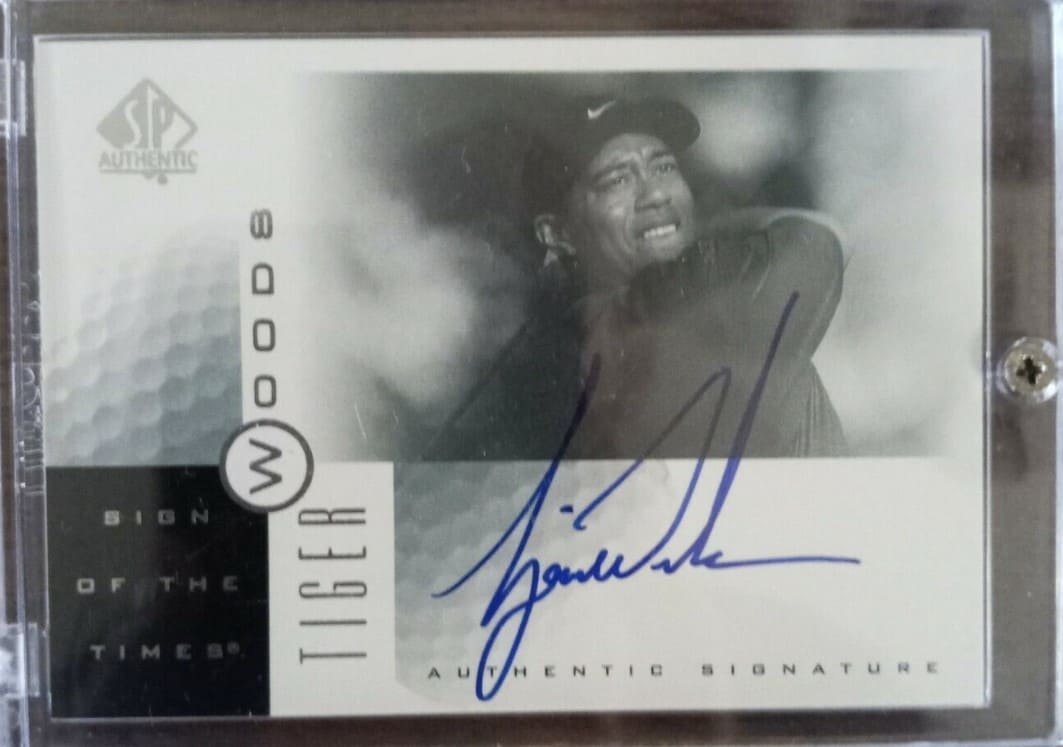 This is another great card by SP Authentic. It was released as a part of the Sign of the Times set, which already had a decent reputation before releasing the Tiger Woods card.

This meant that many collectors bought these packs in the hope of pulling one of Tiger Woods cards.

These cards were distributed in a ratio of 1:16, although the set was pretty big, which meant that getting the card was still not easy.

This means that today, these cards can get pretty expensive. They’re not as expensive as some other cards on this list, but can certainly be more expensive than most. The values might reach into the five figures if the card receives a good grade.

Interestingly, there are also some parallels to this card that you might want to consider.

The most notable parallels are the Red parallels, which are also quite rare to find and can be more expensive than the base card.

Overall, this SP Authentic card remains to be one of the most popular Tiger Woods cards from 2001. 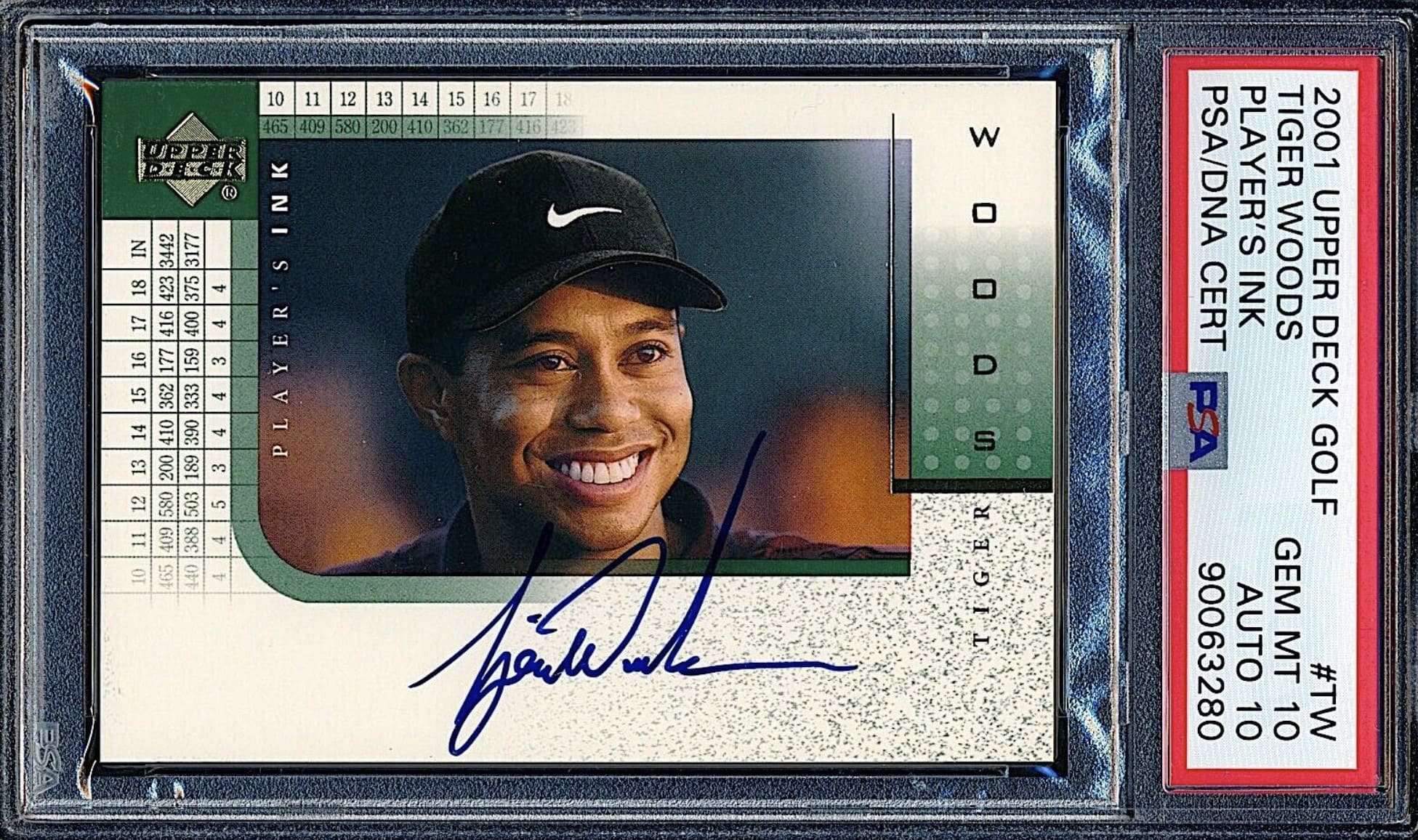 For the cherry on top of the cake, Upper Deck decided to release an autographed version of the Upper Deck card.

This card is one of the toughest to find, especially in the top conditions. It is rare and you had a pretty slim chance of finding one of these in the Upper Deck packs. There were 23 other cards, and this one was perhaps the rarest in the set.

Player’s Ink was thought to be a premium card set released by Upper Deck, as it contained autographs from some of the best players in the world. Of course, Tiger Woods was the card to chase, but not many people had the pleasure to get it.

In terms of design, it is not that different from the base Upper Deck card we’ve seen above. The main difference is the horizontal design, as well as the different image that’s used on this card.

And of course, the main attraction here is the autograph.

In the best possible conditions, this card can sell for a six-figure amount. It is undoubtedly one of the most expensive Tiger Woods cards, so you will need to have a big budget if you’re looking to buy this one.

If you happen to own one of these though, you can count yourself lucky. 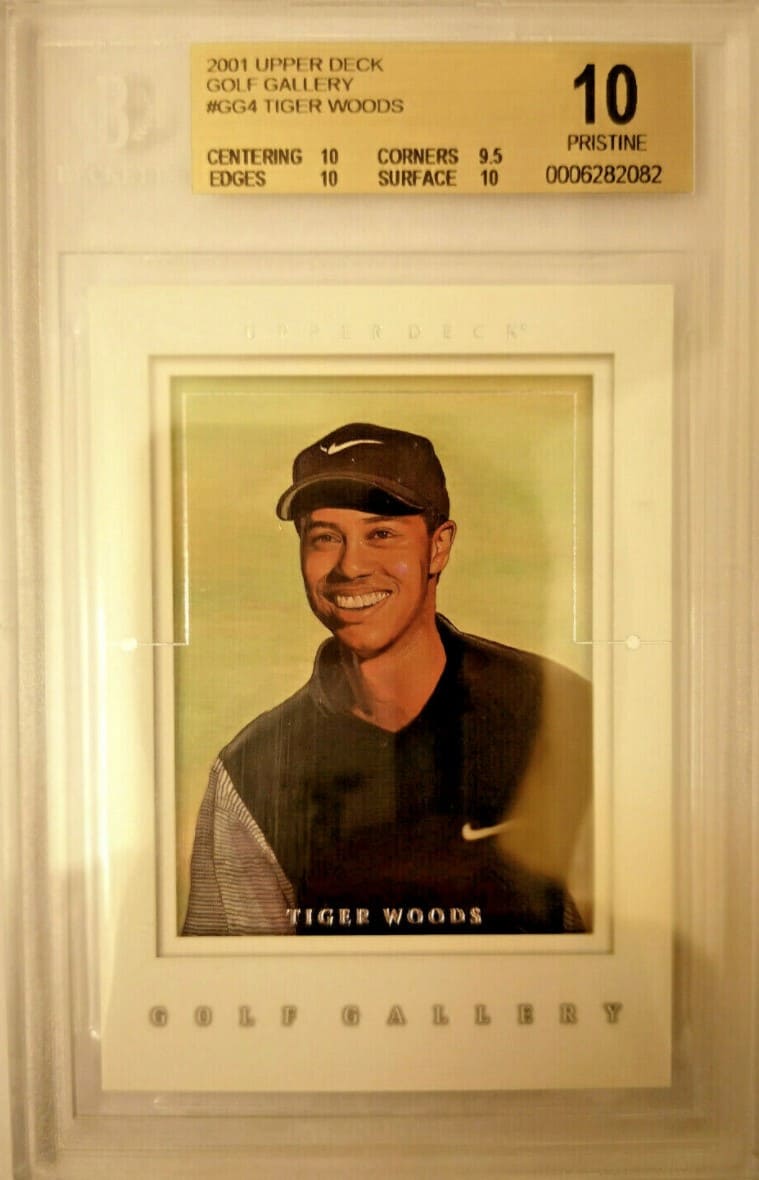 This is a fantastic piece of work by Upper Deck that is going to last for ages. I’m sure that in 50 years, this card is going to hold its value for being one of the classic options when it comes to Tiger Woods.

It is a gallery card, which shows a portrait of Tiger Woods. It’s also created as a more elegant option to the rest of the cards, which fits nicely with Woods’ character.

The image was created by the artist called James Fiorentino, who managed to capture Tiger Woods’ smile to perfection.

Paired with a minimalistic yet attractive design, this card has the potential to last for very long if you decide to buy it. It’s certainly a premium option, which does result in high values for the card.

You can expect to pay a sum that is well into six figures, especially if you want to get the greatest. This means that PSA 9 and PSA 10 cards of this type will sell for extraordinary amounts, although it will also be hard to find one of these on the marketplace – they only come up now and then.

Fidn the Card on eBay 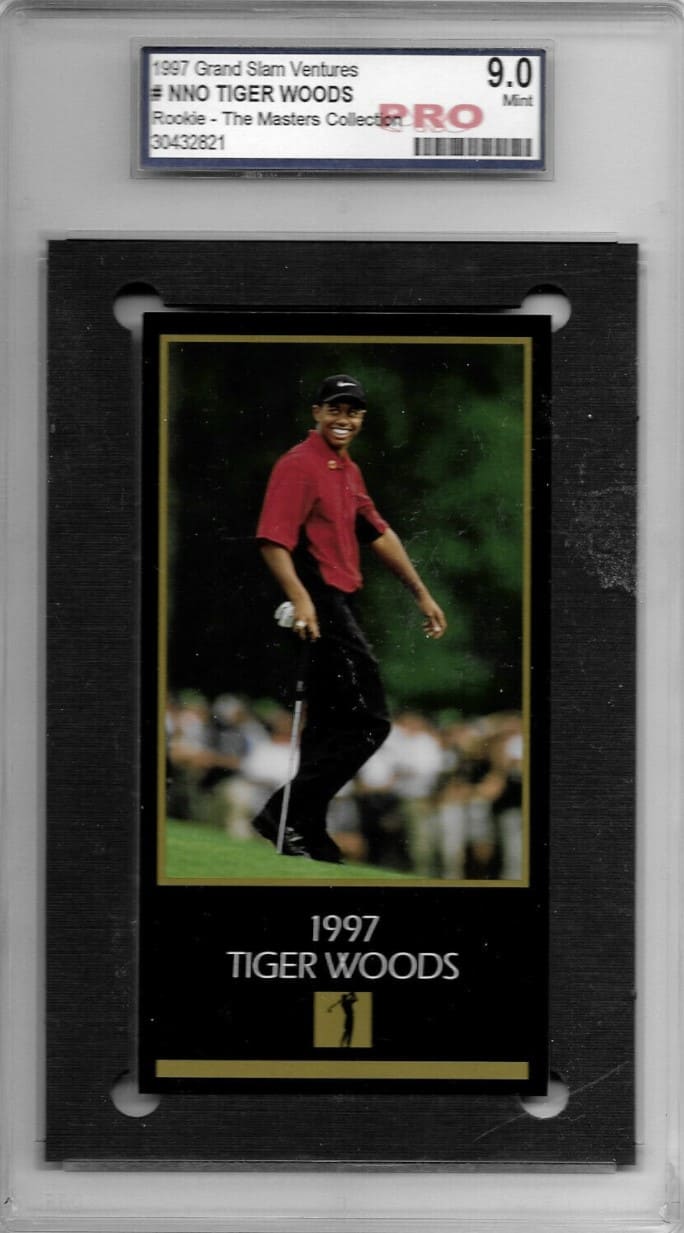 Grand Slam Ventures cards came out every year, and they were usually dedicated to green jacket holders. This one is no different, as it comes from a year when Tiger Woods came out victorious in the Masters tournament.

This card was not the first Tiger Woods to come out, as it was narrowly beaten by the Sports Illustrated card.

However, it does have a bit more prestige to its name. The main reason for this is that these cards were usually made for winners, so they were often more sought-after by collectors.

That being said, it’s hard to argue its stance as a rookie card. Some people might argue that this one doesn’t fall into the rookie category, while others argue that it does.

The card has a black border, which is particularly known for being vulnerable to damage.

Take a look at the listings and you might struggle to find a card with a high grade. But if one does pop out, you’re going to see it sold for high amounts of money. 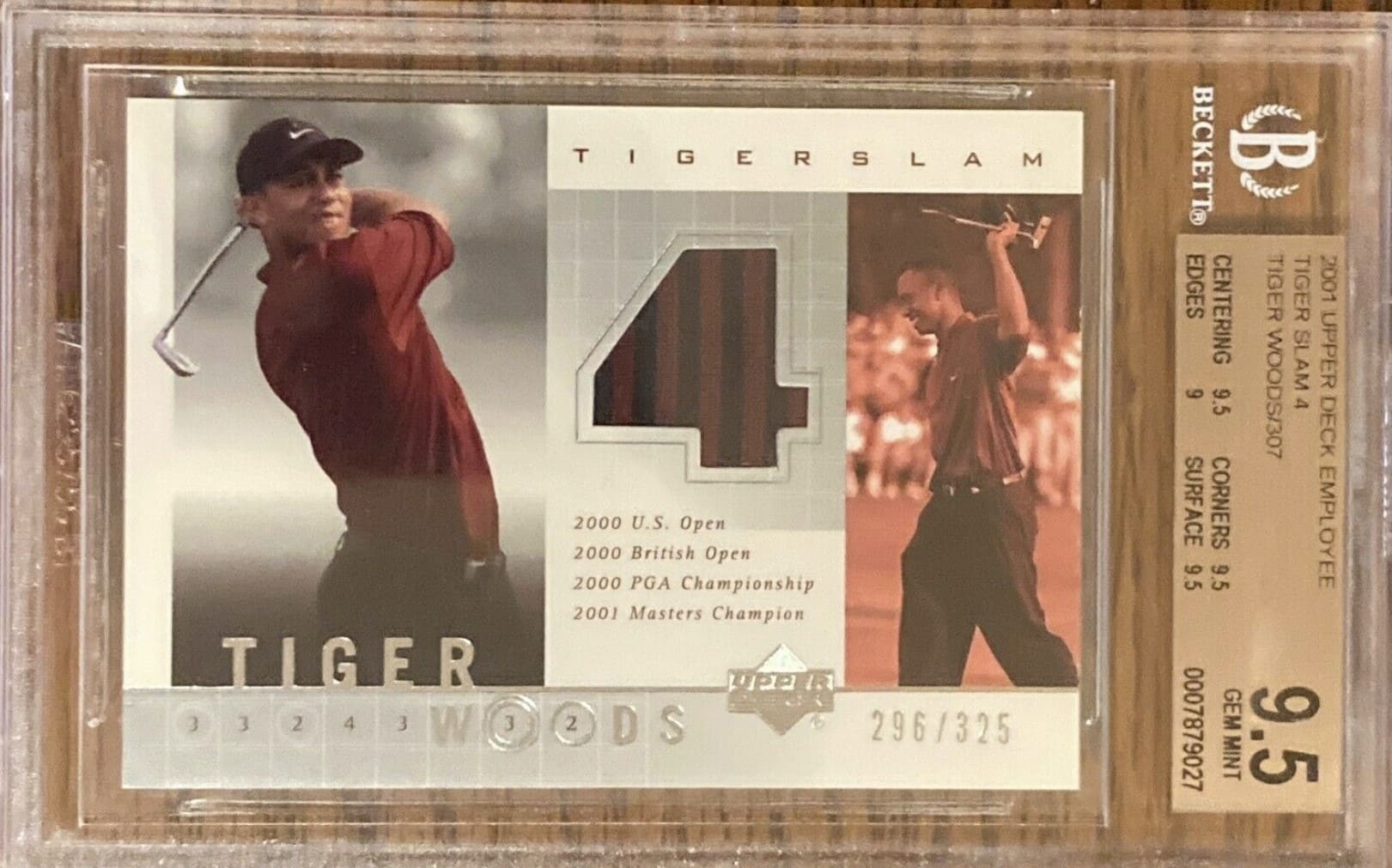 This card is yet another one in the series of Tiger Woods cards that came out in 2001, which means that for a lot of people, this card was considered to be one of the rookie cards.

The big difference between this card and the rest is that it was distributed only to Upper Deck employees at the time. You couldn’t buy this card on the market or in a card set, which makes it extra special.

Only 325 of these cards were thus introduced and handed out to employees.

As it happens, some of these cards are now seen in online marketplaces, but they do come at a premium price – which is to be expected for cards rare like this.

Also, there’s another special feature to this card – the jersey patch. This is one of the only Tiger Woods cards ever to feature this jersey patch, and more impressively, it was from one of Tiger’s shirts that he wore en route to winning the Bay Hill Invitational.

How Much Is a Tiger Woods Rookie Card Worth?

A Tiger Woods rookie card can be worth anywhere between several thousand dollars to up to $150.000. It will depend primarily on the type of card and the condition of the card, but SP Authentic Tiger Woods rookie cards tend to be among the most expensive cards. They’re particularly special because they’re limited in quantity and they have an autograph. Tiger Woods cards will be expensive, especially if they are preserved well.

What Is Considered a Tiger Woods Rookie Card?

There is a lot of debate about this question; most card collectors agree that cards from 2001 released by the major companies (Upper Deck, SP Authentic) are to be seen as official rookie cards. However, the earliest Tiger Woods card released was the Sports Illustrated card from 1996, which some people consider to be the true rookie card. Overall, most people agree that 2001 cards are the rookie cards.