Chris Webber is among the most iconic and talented power forwards ever to grace the NBA. Throughout his career, he amassed a long list of accolades, including five All-Star selections, two All-NBA First Team selections, and a spot on the All-Rookie First Team. 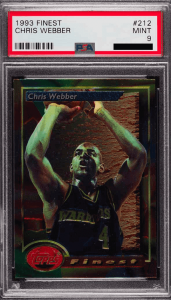 Of all the rookie Cards we can count in Chris Webber’s 1993-1994 season, one of the most beautiful and iconic is definitely his Topps Finest #212. This card is iconic and significant to any Chris Webber collector because of its design and because the 1993-1994 season marks the debut of Topps finest as a product. This is a set of 220 cards in total destined to become, over time, one of the most highly regarded and repurposed sets by Topps in subsequent vintages and a true milestone in sports card collecting.

Within this product, we can also find significant rookies of other players besides Chris Webber, for example, Vin Baker, Anfernee Hardaway, and Jamal Mashburn. This Topps finest of Chris Webber also has its own refractor version that features classic holography on the front. This card variant, in impeccable condition, can fetch several hundred dollars. 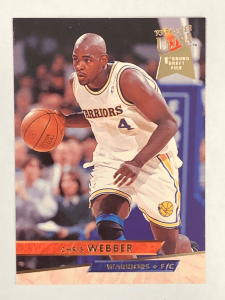 This Chris Webber card is popular among collectors as an inexpensive alternative to having a Chris Webber rookie card in one’s collection. In this card, with a typical Fleer design, Chris Webber is pictured wearing the iconic Warriors uniform and ball in hand to attack. Particularly appreciated on this card is the gold pennant detail placed under the set name “1993-1994 Fleer Ultra” which underlines how Webber was selected in the first round of the draft. 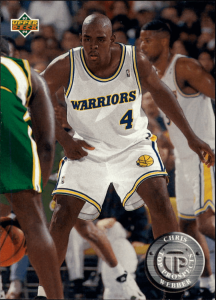 Another good alternative to include in one’s collection of Chris Webber cards is this card produced in the 1993-1994 season by Upper Deck. A very inexpensive card. You can purchase it for a few dollars.

If in the last card, we could observe Webber portrayed with the ball in his hand, ready to attack, in this card instead; he is portrayed while he is intent on defending. 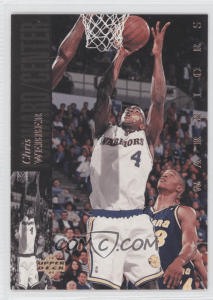 If you are looking instead for a Chris Webber rookie card with a slightly more unique design and perhaps feel like spending a few extra bucks, this 1993-94 Upper Deck special edition – Eclectic card is the one for you. the dynamic shot intent on scoring an elevation basket chosen for this card, in combination with the serif fonts, gold color, and black and white thumbnail image, give it an extra edge and make it a must-have card for any Chris Webber card collector. 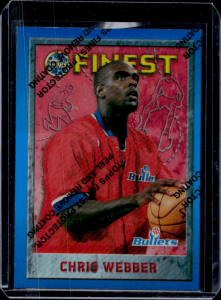 If you were fascinated by the previous 1993 Topps finest card, you would be pleased to know that a base and refractor card of Chris Webber is also offered for the 1995-1996 season. This time, however, Chris Webber no longer appears in his rookie uniform but in that of the Washington Bullets. the color contrast given by the combination of red and blue make this card extremely modern even to this day. The success of this card, however cheap, is also due to the shot chosen. In fact, in the image, Webber is preparing to take a shot. I also find interesting the choice of capturing him in his pre-game uniform and the graphic in the background that recalls a pattern drawn on a blackboard. 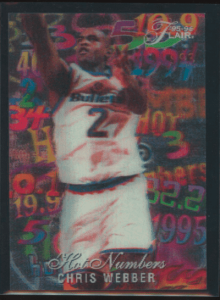 If you are a lover of uniquely designed cards, this “hot numbers” insert in the 1995 Flair set is a must-have in your collection. This insert consists of 15 total cards and is unique because it features a three-dimensional effect created by a lenticular layer on the front of the card. The card design features the player’s image in color on a background with different numbers.

The number motif is also shown on the back of the card where we find another outlined image of Chris Webber, with a short biographical text printed in white color. 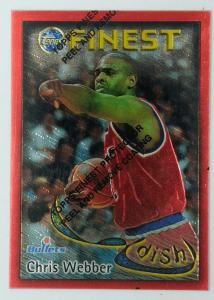 Also, within the Topps Finest 1995-1996 set, we find a very special insert that some collectors particularly appreciate. The name of the insert is “Swish & Dish”, which is very interesting because, on both sides, a player is depicted. In the case of Chris Webber, he was paired in the card with his teammate Juwan Howard.

Topps Finest cards were found with a protective film that could be removed. That is why the value of the cards varies greatly not only according to their condition but also whether the protective film was removed or not. Of course, most collectors look for and prefer still perfect cards, as if they had just been unwrapped, so still with the foil. Keep this information in mind if you plan to add a card from the Topps Finest set to your collection. 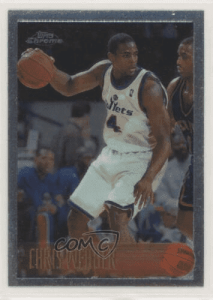 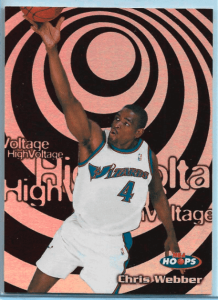 This insert featured within the 1997 Hoops set depicts the darlings ingrained to electrify the crowd. In this card, which features an almost hypnotic pattern in the background, Chris Webber is wearing a Wizards jersey and intent on putting up a basket. The High Voltage subset consists of twenty cards; on the back, the cards are prefixed with “HV.” The basic version of this card can be purchased and included in one’s collection for a few dollars. Rarer, however, present in the same set, is the numbered counterpart on /500. To be able to place this numbered variant of the card within your collection may require several hundred dollars. 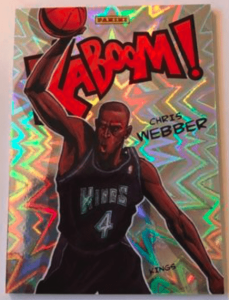 We conclude this brief guide to Chris Webber’s most significant cards with a much more modern card than the previous ones. In fact, we are talking about the highly sought-after Kaboom insert that was contained within the Excalibur set in 2014. This particular card has a very distinctive design. Chris Webber, as well as all the other players represented in the set, is drawn in a cartoon style on a holographic background and the bright red kaboom lettering typical of comic books. Such a beautifully designed and sought-after card that several hundred dollars are required to purchase it.

In conclusion, Chris Webber is an iconic player with a great selection of trading cards. These cards are some of the best options for collectors looking to add a Chris Webber card to their collection. Whether you’re looking for a vintage or modern option, a Chris Webber card is perfect for you. Happy collecting!