Ted Williams is today considered to be one of the best hitters in league history. He has 521 home runs to his name, putting him right near the top of the all-time home run hitters in history. This earned him the nickname “The Thumper”.

Let’s see what the rookie card of this prolific hitter is, and some other great cards that are worth considering. 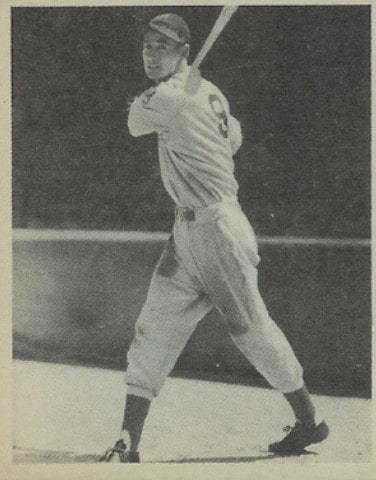 The 1939 Play Ball #92 Ted Williams rookie card is still his most recognizable and popular card. If you compare the value of this card to some other cards of its ilk, you’ll find that it easily makes the list of the most valuable cards out there.

Part of the appeal for this card is the recognizable black-and-white design, which was getting slowly eradicated in the late 30s – but this card feels like a real classic card that will stay iconic for decades to come still. The image is also what makes it so hugely popular, especially considering Ted Williams’ hitting ability.

With pre-war cards, there’s always some debate as to which card of certain players is actually the player’s rookie card, and it’s understandable. The card landscape was very much different and cards were not that abundant, plus there weren’t rookie packs like we see today.

However, the general consensus is that the 1939 Play Ball card is the most widely recognizable Ted Williams rookie card. After all, it was his first major card that was available to the general public, too. This alone increases the value and the importance of this card for being the first card in Ted Williams’ long and successful career.

In terms of looks, it offers nothing special, but that’s perhaps what makes it so charming. It’s just the quintessential pre-war card that people think about when we talk about 30s cards. It features a black-and-white design with Ted’s image right in the middle with no additional fancy graphics.

This no-nonsense approach is preferred mainly with old card collectors, and we don’t see it today (or very rarely).

The Value of the Card

As with most old cards, there will inevitably be some centering issues and general wear-and-tear. But this card is still his most valuable card and may reach dizzying six-figure heights if the card is kept especially well – but anywhere between $50.000 to $100.000 is almost a guarantee, no matter its condition.

The card was issued by Gum Inc., which is today (or later) known as Bowman. It’s a natural precursor to some of the biggest and most famous baseball cards after the war and in the modern era.

Even though this card comes from the pre-war era, it is not as rare as you might think. According to the PSA Population Report, there is just one PSA 10 registered and widely known, although the value of a PSA 10 is unclear.

As for PSA 9 Ted Williams Play Ball cards, there have been 12 of them graded by PSA, and these are some of the most expensive cards in the world, reaching and sometimes easily exceeding the six-figure mark.

But if you’re happy with a PSA 8 or lower graded cards, you’ll be pleased to know that there are plenty of them still available today. The number of PSA 8 cards is just shy of 100, while PSA 7 or lower, you’ll find more than a hundred of them for each grade.

Of course, the value of the deteriorating grades will get lower, but they will almost never get below the $2000 mark unless the card is really worn out and in poor condition.

So, the 1939 Play Ball card is the most widely recognizable Ted Williams rookie card, but there have been some other great cards throughout his long and fruitful career. These are the best ones you can take a look at.

If you don’t have the budget to get the rookie card, then you can consider the next-best option when it comes to Williams’ early cards: the Goudey Premium card from 1939.

Some will argue that this is his first card, although the Play Ball card has been accepted as his rookie card. The Goudey card is still pretty underappreciated and thus not nearly as expensive as the Play Ball card.

The problem with this card is that it’s not nearly as widely available as his rookie card. In fact, you probably won’t find it in the marketplace. In addition, it’s not really a card but more of an image, although it’s still an overlooked piece of memorabilia that you can consider if you’re a fan of old memorabilia.

But it’s the image that makes this card so damn appealing. It’s his famous corkscrew swing that made him such a popular player working the magic on this card, which is quite similar to the Play Ball card just from a different angle. 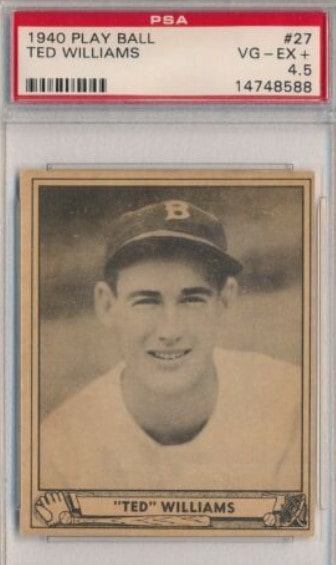 If you’re happy to accept that you won’t be able to get his rookie card cheaply, then you can go for his second-best card – the 1940 Play Ball card. This set was one of the most famous pre-war sets, as it featured greats like Ted Williams and Joe Dimaggio.

The overall design is a bit more developed than with his rookie card, as you can see the first starts of the on-card graphics starting to come to fruition. The image is quite different here, though. It’s the frontal image of Ted Williams instead of the famous corkscrew.

This card is the third-oldest Williams card and not that expensive, too. If you’re swayed by old-school, black and white cards, then this one will be right up your alley, provided that you can find one that’s selling.

Surprisingly, there are fewer of these cards than the 1939 Play Ball, especially in the higher PSA ratings. There are only 4 PSA 9s although there are more PSA 8 cards and lower graded cards, so you might have a bit more luck there. 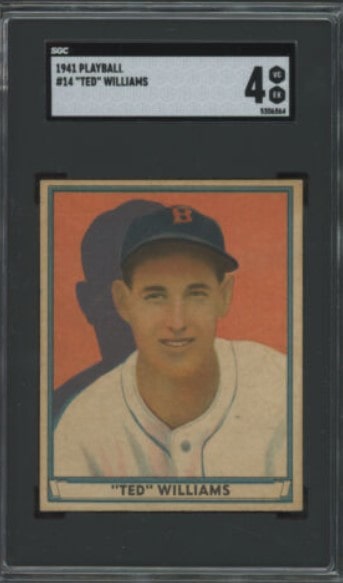 The 1941 Play Ball card is the first colorful card that you’ll find of Ted Williams. It’s also his last pre-war card before he was drafted for WW2 and all the major competitions were interrupted.

The 1941 season was something of an enigma for Ted Williams. It was considered to be the best offensive season by a player up to that point, although the MVP award went to Joe DiMaggio. Some people deemed that slightly unfair on Ted Williams, even though he managed to win two MVP awards later in his career.

It was still one of his best professional seasons in the league, having a .406 batting average, which was the highest average of any Red Sox player since 1924.

And this historic card celebrates his record-setting season in 1941. It still features the same card design as the one from 1940, although the image is colorful this time – for the first time of any Ted Williams cards. 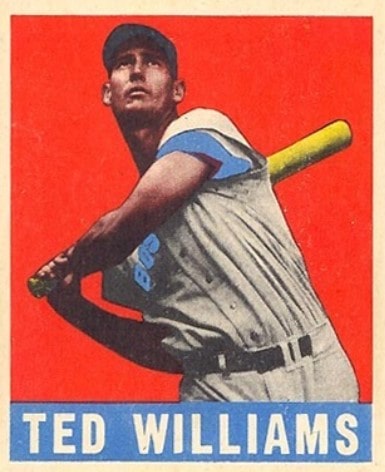 Leaf cards were immensely popular cards after WW2 and in the 1950s, as most of them featured colorful designs and iconic imagery – and this one from 1948 with Ted Williams on it was no different.

The appeal for Leaf cards after the war is still immense. The colorful background makes the image of the player stand out nicely, and the card “pops”, as card collectors would call it. And this image is also famous for its image on it, as it features a batting Ted Williams, waiting for his next potential home run to add to his tally.

From 1946 to 1949, Ted Williams was one of the most dominant players in the league, winning the 1946 and 1949 AL MVP awards. He also featured in all of the All-Star games between those years, and was considered to be one of the best players in history, and certainly among the best hitters.

Get this card if you like the colorful design of the Leaf cards after the war and if you are prepared to shell out several thousand dollars to get a good version of this card – which won’t be particularly easy. 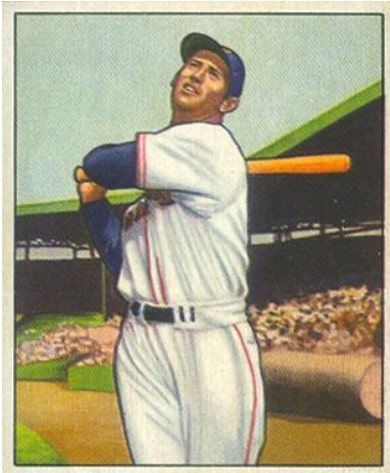 Bowman cards after the war all featured this slightly cartoony look, and the Ted Williams card was no exception. You’ll find him in his famous swing here, depicted during a game in front of full stands.

Overall, Bowman cards from the 50s featured impressive art designs and artwork, which required not only a great deal of skill from the artists but also decent imagery to succeed. And succeed they did.

Today, graded cards like these will likely go into thousands of dollars, although you’ll find many ungraded cards that will cost less than that. Watch out for centering issues and plagiarism that plague the marketplace! 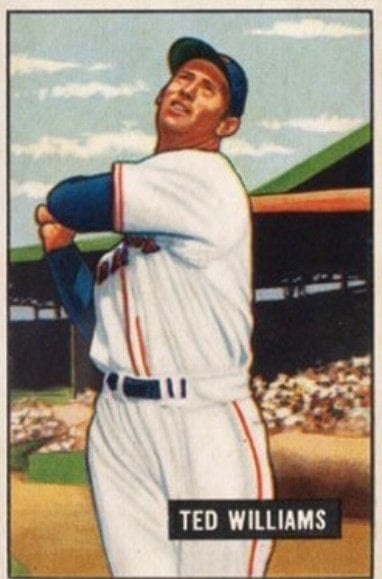 The 1950 Bowman set was so hugely popular that Bowman was reluctant to change the overall design. If it works, why change it?

So the 1951 card of Ted Williams springs no surprises. The imagery and the art design are largely the same, featuring a batting Ted Williams in front of a full stadium. The only real differences are the name tag on the card and the clouds on the sky, but that’s about it. It was also a bit larger than the 1950 card, but not by much.

Owning the 1950 and the 1951 Bowman cards at the same time might seem redundant, although some perfectionists will try to recover them both and add them to their collections. 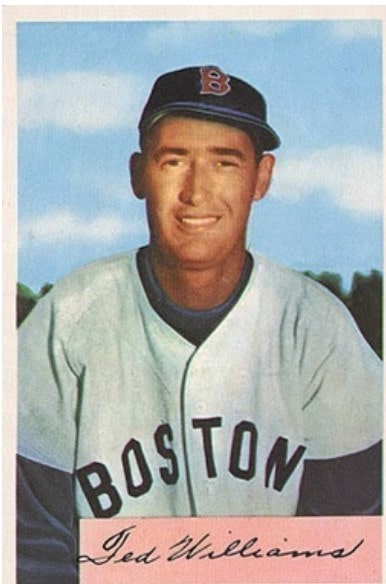 The 1954 Bowman Ted Williams card is one of the most famous and also controversial cards in card collecting history. This card was pulled out of production by Bowman because Ted Williams had seemingly agreed on a contract with Topps to make his cards, although by that time it was too late – Bowman has already released some of his cards.

This means that you have a very set run of prints for the 1954 Bowman Williams card. There weren’t and still aren’t many of these available, which means that the value of this card went through the roof in the subsequent years, and it still is pretty high today.

The card itself is a beauty, though. It features Ted Williams’ frontal image in his Boston jersey, and a nice and slightly different graphical design at the bottom of the card with his name printed. Again, we can see the famous clouds on top of the card, which was a feature of those early 1950s Bowman cards. 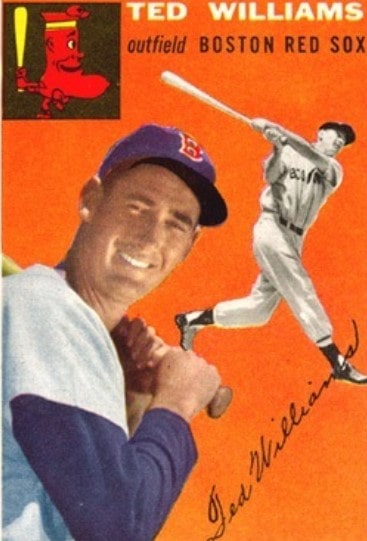 This is the card that made history in the card collecting world. It’s Williams’ first card with Topps, and most of his cards later on will be with this company. It’s very different from the Bowman cards, too.

It features a smiling Ted Williams in the left-hand corner on an orange background, and an image of him hitting the ball in the top-right corner. It’s a bit more graphically intense and colorful than the Bowman cards. 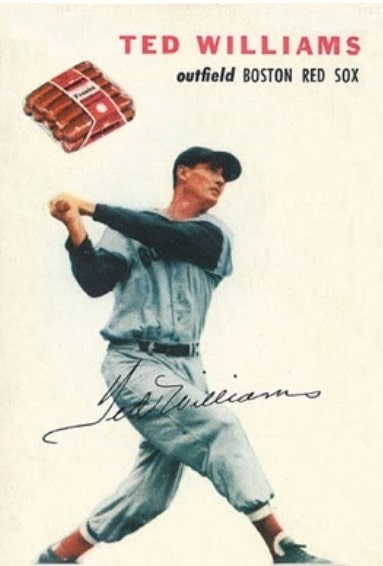 Let’s finish this list in style with the 1954 Wilson Franks Williams card. This was one of the most famous cards in the 1950s, as Ted Williams is depicted on this card batting a package of hot dogs.

Food cards were quite common back then; food companies used baseball cards to promote their products, and Wilson Franks was one of them. Today, this card is one of the most expensive cards in the world, even though it might appear a bit cheesy.

The value of this card will go into six figures easily if it’s found in a decent condition.