In this article we’ll look at the best Lamar Jackson rookie cards – along with a few of my favorite other cards too.

Let’s start this list with some more premium options and then take a look at the more budget cards towards the end. 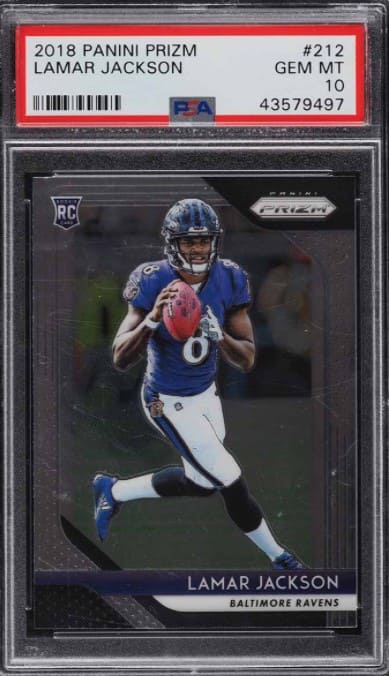 The base card is highly sought-after, because it comes from such a popular brand like Panini Prizm, but it also has an attractive design.

And while it may not be as premium as the cards we’ve featured above, this still has massive potential when it comes to investing into the future.

However, if you’re still looking for some epic premium cards, then you can always consider the Panini Prizm parallels. When it comes to parallels, this brand is where it’s at. You’ll find some of the most attractive cards from this line of cards, especially the rarer parallels with a more premium feel. 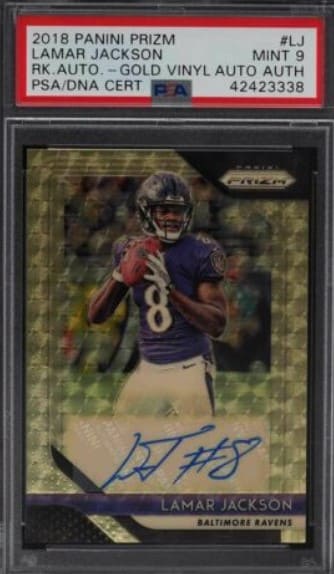 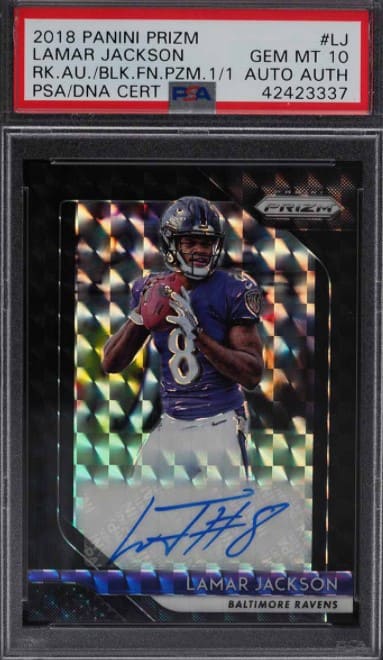 Nice, isn’t it? Panini has done a good job with this card. 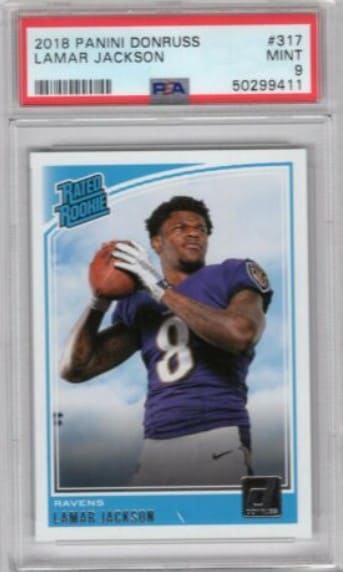 If you don’t have thousands of dollars to spend and you’re looking for more budget-friendly cards, then these next few cards might be a better option for you.

Starting off this category is the 2018 Panini Donruss Rated Rookie card, which is a very well-known card brand for rookies. It’s known for its higher print numbers, which means that the card will not be as expensive as some rarer cards.

The card has a pretty basic look and feel to it, although this is what some collectors prefer nowadays.

It still has the swag and the coolness that Lamar Jackson brings, and this is all that matters to those collectors who adore him. It’s also a great option to invest in if you’re tight on a budget and you don’t want to spend serious cash yet on a card. 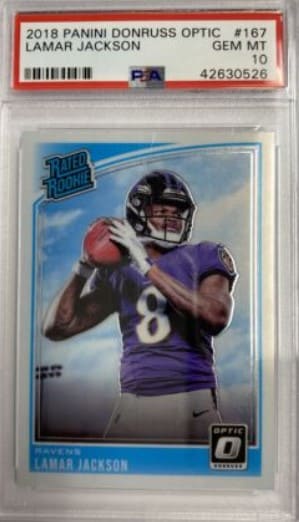 Panini Donruss and Donruss Optic look almost alike – well, for the most part, they are. The only notable difference is that Lamar is wearing a helmet on this card.

Is that all there is to it? A helmet?

Donruss Optic is a slightly more quality card, as it has a distinct chromium feel and finish to it, but it’s also created on a higher quality card stock. This means that the Optic will be inevitably more expensive than the Donruss card.

But while it is a bit more expensive, it’s also a better investment if you want a card that will last longer.

Because of the better build quality, Donruss Optic will offer a bit more longevity than the Donruss card. It’s probably worth considering whether you are prepared to pay a bit extra for the card quality with this one, or if you’re really tight on your budget then the Donruss card is still a decent option, just not as premium-feeling. 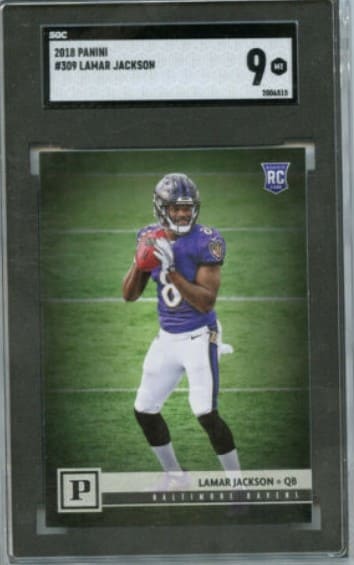 For many years now, the base Panini cards have been seen as the budget option when it comes to football cards, and this one is no different.

It is printed on a canvas stock, which makes a slight difference from the rest of the so-called budget cards. This means that this card is a bit of a marmite – some like it, while some avoid it like hell.

But if you’re in for a simple card, then this might be the least expensive entry-level card which still offers a good opportunity if you manage to get it early enough. 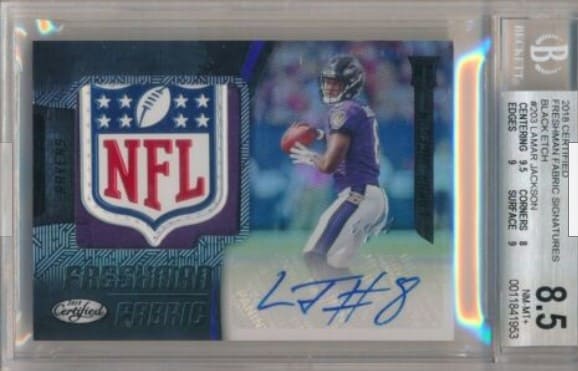 Starting off the list is the 2018 Panini Certified Lamar rookie card.

The Panini Certified brand is one of the most popular card brands for premium card collectors. It’s known for its premium feel and look but also additional features on the card, such as players’ signatures and jersey patches.

And this card’s no different.

You’ll find an attractive design on the card with an on-card signature of Lamar Jacskon. He signs his cards as LJ#8, which is unique and hard to miss, giving the card an extra bit of character.

But there’s one more thing that you should know about this one. Lamar Jackson’s rookie card with Certified had a shorter print run than of other players – most cards have 499 cards printed, but Jackson’s base card only has 99…

And this is also the case for the parallels (btw, the parallel in this image is the “black etched” parallel). 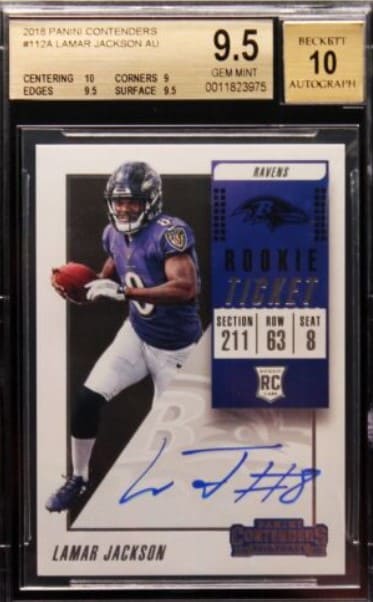 You’re looking at one of the hottest modern cards that are selling today.

Yes, alongside some other basketball and football cards, the Lamar Jackson Panini Contenders card will reach some of the highest values out there, as it has the potential to cost several thousand dollars.

However, you simply can’t ignore its big investment potential. Yes, it might seem expensive, but firstly it’s from Panini Contenders which in itself, is enough to make any card more expensive.

And secondly, it has Lamar Jackson on it which means that the potential with this card is huge. 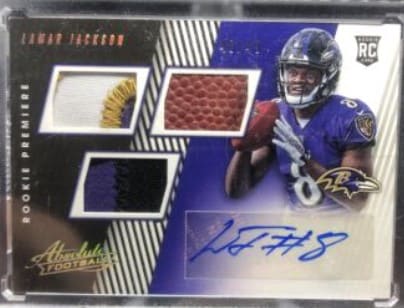 Out of all the premium cards we’ve featured so far, this Absolute card from 2018 will probably be the toughest to find. Most likely, you’ll find some listings of ungraded cards, which means you should proceed with a bit of caution.

But since the card comes from a reputable brand like Absolute and it has an autograph on it, you can still expect some competition from other collectors.

For those reasons, this card certainly ranks among the more expensive Lamar Jackson rookies and like other cards, has massive potential going forwards, too. 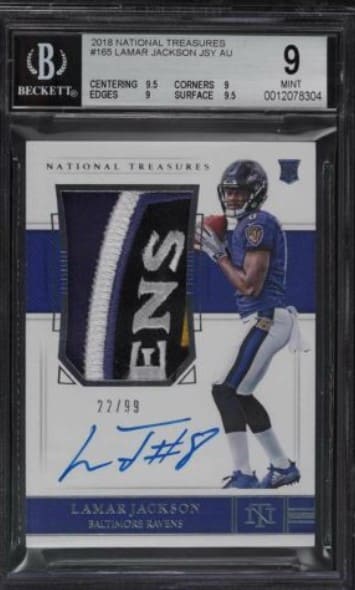 When it comes to premium cards, there are not many better card brands than National Treasures.

These cards have a long history of brilliance and are known for their elegant design and a premium feel. Like other National Treasures cards, this one will also include the player’s autograph and a patch of his match-worn jersey.

But if you want that jersey and the famous National Treasures brilliance, you’ll have to pay up – or quit. 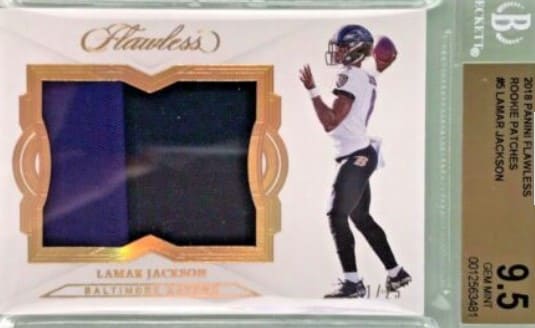 These also have an elegant feel to them and they’re limited to only 25 copies, which makes buying this card a bit more challenging. The base card has a match-worn patch and the golden letters that are typical for the Flawless brand.

However, if you’re really crazy and you have money to burn… 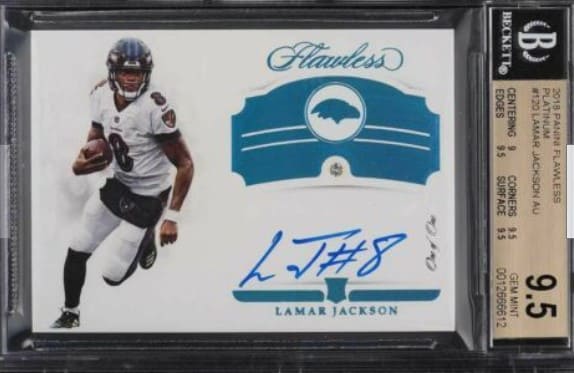 Then you can consider one of the parallels of this card.

Like for example, the Platinum parallel seen above which only has one copy to its name. But not only does it only have one card, but it’s also much more premium than the base card, because the material of the card is of a much higher quality.

If you don’t fancy spending an exorbitant amount to get this card, you can also consider some other parallels that are not as expensive as this one, but will still go well into six figures.

Some of the parallels you can also consider include Canary Yellow Diamond, Emerald Gems, Sapphire Gems, and some others. 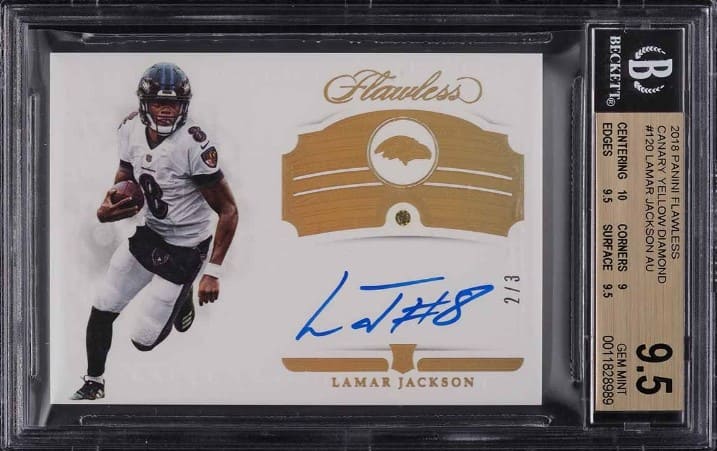 Yep, these are certainly some of the most expensive modern cards you’ll find in any sport, and rightly so… 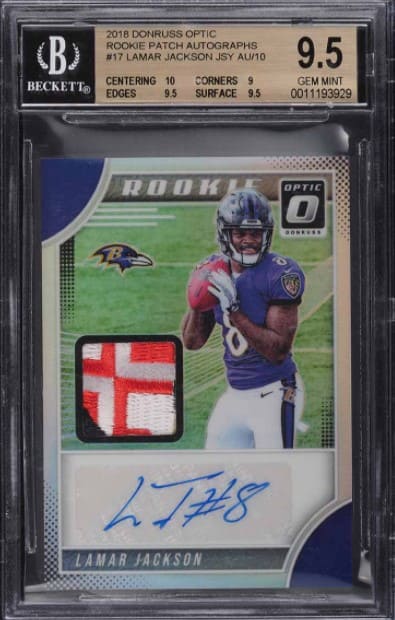 Donruss Optic is undoubtedly one of the most popular card companies that people buy rookie cards from. And with gems like this one, there’s little wonder why it’s so popular.

This card has a real premium feel to it, as you’ll be able to get an autograph and the on-card jersey patch.

What is special about this card is that there are only 10 copies to its name. Donruss has managed to keep this card in lower quantities which results in much higher prices for the card.

In the higher conditions, this card has the potential to counter and challenge even the most expensive Lamar Jackson cards, including some of the premium cards we’ve seen above. 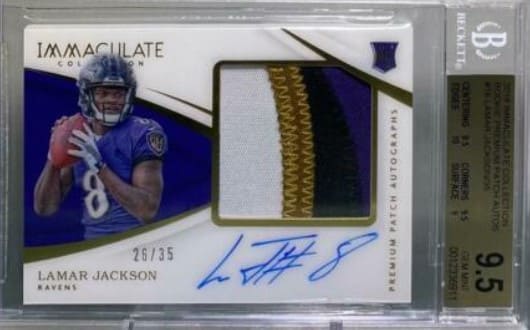 Immaculate is also a part of the premium card group – however one of the main selling points of this card is its card stock quality.

The card is made from a plastic-like acetate card stock, which makes it feel like you’re holding something that will not just disintegrate easily and it has the potential to last for much longer than the “usual” cards.

And of course, there’s also the on-card autograph and the jersey patch to top it all off, which results in one of the most expensive packages overall.

But it’s still not quite as expensive as, for example, National Treasures, which puts this card in the more affordable tier of premium cards. 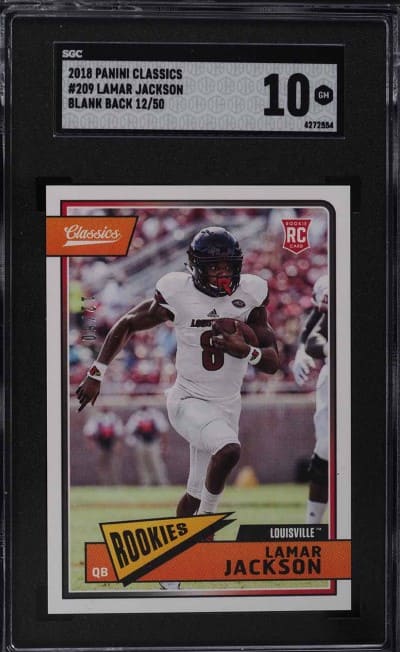 Then the 2018 Classics Lamar Jackson will be the right choice for you.

If you look at this card, it has almost a 1980s – early 1990s feel to it. It’s a bit baffling to some people that this card is released in 2018 and it’s not based on an earlier product, like some cards out there tend to be.

However, these Classics cards have always been popular and were often bought by people who don’t like the flashy, colorful modern cards and prefer to go for the older-styled cards.

Another advantage of this card is that it’s not that expensive and it’s quite easy to get, too. 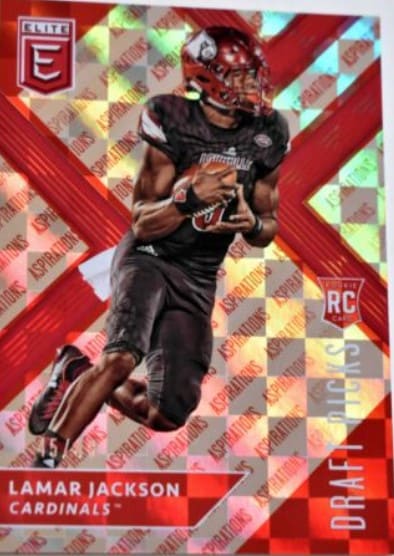 On the flip side of the Classics card is the Elite card, which is known for its flashy and colorful appearance.

It has an x-shaped style and some squares that make the card a bit shinier. But even though it might seem like a premium card, it’s actually quite easy to get and affordable.

This is the result of a larger print run, which eliminates the rarity which, as we so often say, raises the price of the card.

For this reason, the Elite Draft Picks Lamar Jackson rookie card is yet another excellent option for budget collectors. 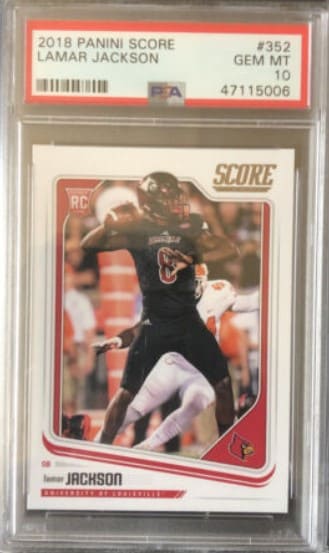 Last but not least we have the Panini Score card, which takes a slightly more basic design and is an appealing option if you’re looking for a cheap, entry-level option when it comes to Lamar Jackson cards.

Accessibility and budget-friendly nature has always been a feature of Score cards, and this one’s no different. It’s actually quite a historic card company that’s been around for decades, yet the prices still remain quite low.