If you followed MLB and watched some baseball back in the 90s, then you know how big a star Frank Thomas was.

He had a wand of a right arm and was (and still is) considered by many to be one of the top designated hitters of all time.

With 521 home runs in his career, Frank Thomas makes the list of the 20 best home run hitters of all time. Now that’s impressive!

Most of us remember him from his Chicago White Sox days, but he was still a feared hitter in his later days, despite some career-limiting injuries that prevented him from getting bigger numbers.

Let’s first take a look at some of the cards from Frank Thomas’ official rookie year, which was in 1990.

Note that there are also some cards from earlier in his career that we will mention later on. 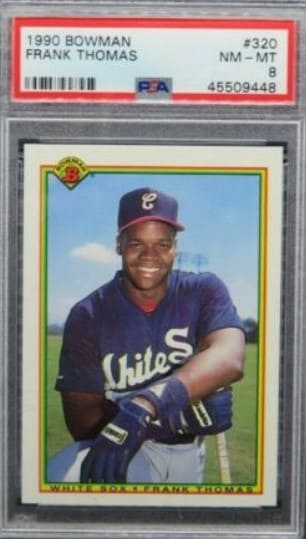 If you’re a keen collector of 90s baseball cards, then you probably know that Bowman is the go-to brand when it comes to rookie cards.

In the early 1990s, Bowman as a card brand was still finding its feet in the card collecting world after being resurrected in 1989 by Topps. And with a card brand with such a huge identity and history, collectors were immediately keen to jump onto the Bowman hype train.

This Frank Thomas rookie card was certainly a part of that enthusiastic era of the early 90s Bowman cards.

The first thing you’ll notice is the minimalistic design. It reminds of those 1950s card designs with very little going on in terms of on-card graphics.

That’s not necessarily a bad thing.

It feels like a classic card, despite the fact that it might not be the most visually pleasing card by today’s strong standards. And Frank Thomas’ wide and bright smile will make you forget that the overall design is a bit basic.

And let’s not forget about the Bowman Tiffany version of this card: 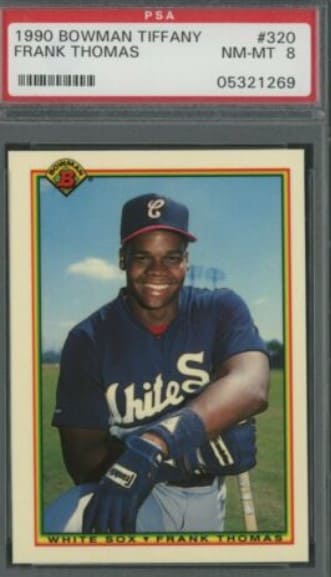 The Bowman Tiffany Frank Thomas rookie card should be your choice if you’re looking for something a bit more premium.

While it looks the same, it’s made on a better quality card stock, and it has a glossy finish. If you look a bit closer, you might notice that the Tiffany card is also slightly darker than the base card.

There were only 3000 copies of the Tiffany version, which makes this card slightly harder to find but also a tad more expensive. 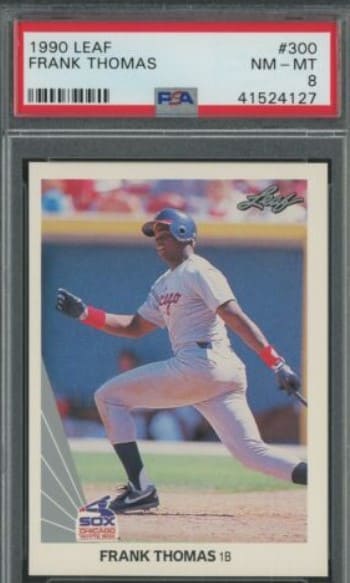 A first look at the Leaf card might leave you a bit confused as to why this was such an iconic and popular card back in the 90s.

Every collector wanted one of these. In fact, it was perhaps even more popular than the Bowman card.

It might not look the most appealing, but it’s all about the image – and of course, the name of the card company. Leaf established itself by the early 90s as the most popular brand for rookie cards.

And if you look at the image, it certainly has more action about it than the Bowman card.

If you want a card with an action shot of Frank Thomas, then this is your best bet. However, you must know that the competition to get this card is still strong, just as it was when it came out – if not even stronger! 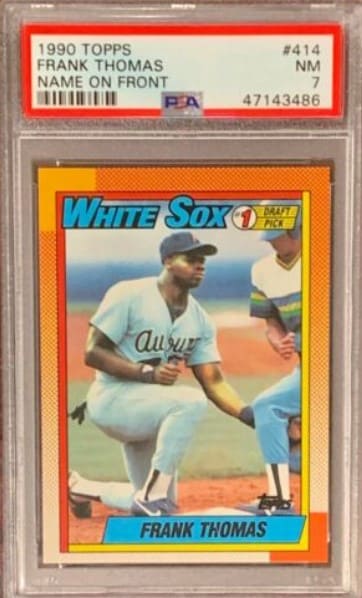 Topps is undoubtedly one of the biggest, if not the biggest, card company in history. The natural thing about this card is that it will have a lot of admirers simply for the fact that it’s a Topps card.

Granted, this might not be the best ever card to come from Topps.

The borders on the card look somewhat off especially the colors, and the image is with Frank Thomas in his Auburn jersey, which might not suit everyone – especially the Chicago White Sox fans.

But the Topps tradition is far too strong and that’s why this card was and still is highly desirable, and it might reach a few hundred dollars in price.

However, there’s one version of this card that is much more expensive than the base card.

And that’s the same Topps card with no name on the front. This little flaw was very rare, meaning that only the unlucky (or shall we say, lucky) few cards today are still selling with this design flaw.

And where there’s scarcity, there’s value. This might just be the most expensive Frank Thomas rookie card, as the prices can reach into the five-figure territory. 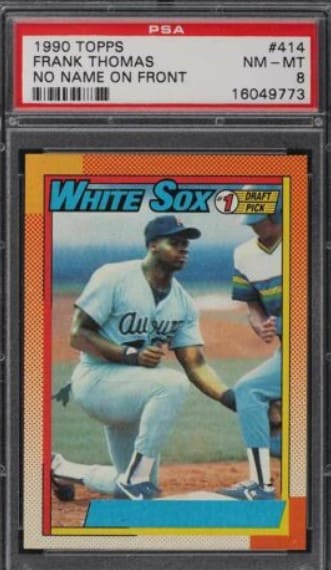 Another card that’s worthy of a mention here is the O-Pee-Chee Frank Thomas rookie card, which looks like this: 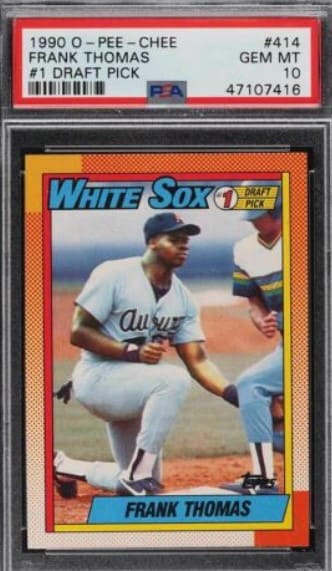 It looks exactly the same as the Topps base card, so where’s the catch?

Well, the biggest difference between the two is that it was made for the Canadian market, and the stock quality was not as good as with the Topps card.

So if you grew up in the US, these cards were branded as Topps. If you were in Canada, then this would be an O-Pee-Chee card. 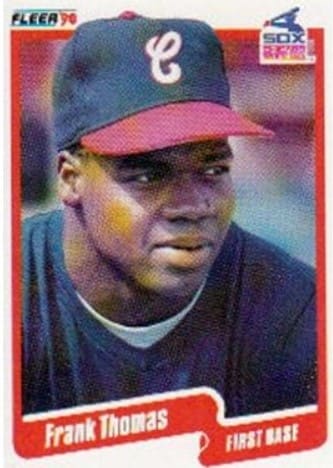 When the first Fleer set came out in 1990, some collectors were disappointed that it didn’t include Frank Thomas, especially because the Fleer card brand is so hugely popular among many collectors.

But Fleer didn’t leave the collectors waiting and they released an update set where luckily, Frank Thomas was included.

It’s easy to like this card, especially because it has a mixture of smooth graphics and colors – it’s easy on the eye.

And availability also won’t be an issue, since Fleer released the update set with massive numbers, which means that the card is still easily accessible today. 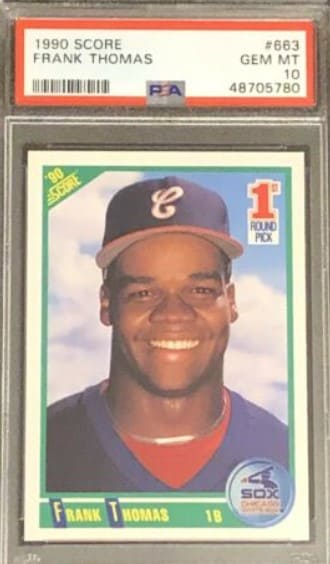 The 1990 Score Frank Thomas card is one of the more elegant and subdued entries to this list of Thomas rookie cards.

While it might not win many design awards, it is a simple card with a smiling Frank Thomas on it. For the average, budget collectors, this might be one of the first entries to look at when it comes to Frank Thomas rookie cards.

But if you’re a 90s card collector, then you know that with 90s cards, it’s all about the character and the personality of the card rather than the design. And this card has plenty of character. 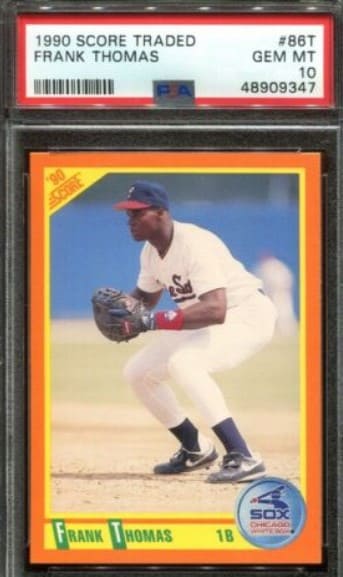 We could have included this Score Traded card under the 1990 Score section, but this card warrants its own mention because it just looks so different.

This card was included in the subsequent release of the Score cards update. While it’s not the true rookie card for that fact, it was still released in 1990, making it one of the earliest Frank Thomas cards out there.

And when you compare this Score Traded card to the base Score card, you’ll find that it’s also vastly different from its companion. 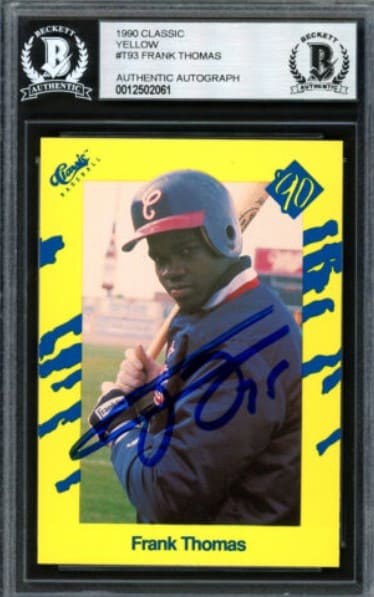 Every time you see an autographed card from the early 90s, it’s only normal to be a bit skeptical about the originality of the card. Autographed cards were still not the industry-standard back then, while many collectors had their cards autographed by the players directly.

And this is exactly the case with this card.

Normally, I would advise you to be wary of autographed cards if they’re not graded but since this one is, you can stop worrying about the legitimacy of the card.

But because the Classic card was not among his most popular rookie cards, the prices will never reach the heights as they normally would for autographed cards.

So if you want a great autographed card from the 90s of Frank Thomas, then this Classic card might be an excellent opportunity to own one without breaking the bank. 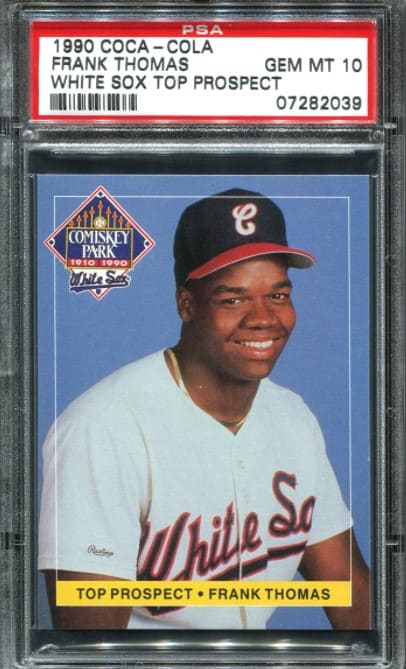 If you want more of a challenge, then the White Sox Coke Frank Thomas card is the right choice for you.

This card will be hard to find today, but it was a real treat for every White Sox fan attending a game.

These Coke cards were given to attendees of games at the entrances, so only the lucky few were able to get this card. There were 29 other cards in a 30-card set that contained all the players from the White Sox roster at the time.

This might not be the most mainstream card in the world, but rather a card for those collectors who are looking for something a little bit different and not necessarily as easy to find.

As already mentioned, the cards from 1990 were not the earliest known cards of Frank. Some cards came out much earlier and during his college days where he was already showing the promise to become a great. 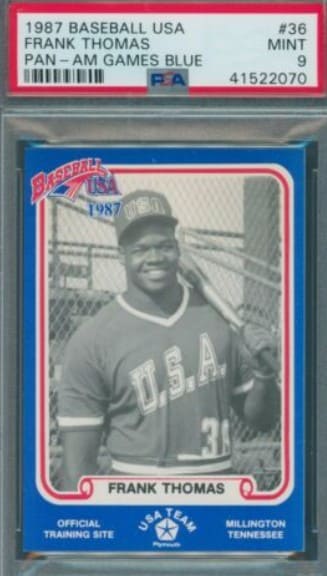 The 1987 card from the Pan-Am games was the first ever card produced for Frank Thomas.

For those unfamiliar, Pan American games are held every four years in the summer. In these games, athletes from the US and Central America compete against each other in a variety of sports.

1987 turned out to be the year when Frank Thomas was involved. These games are very well-known for often including many young players and hot prospects, which Frank Thomas certainly was by 1987.

If you really want the earliest card, then try and get the one with the blue border. There was another variant of this card released in 1990 with the red border. 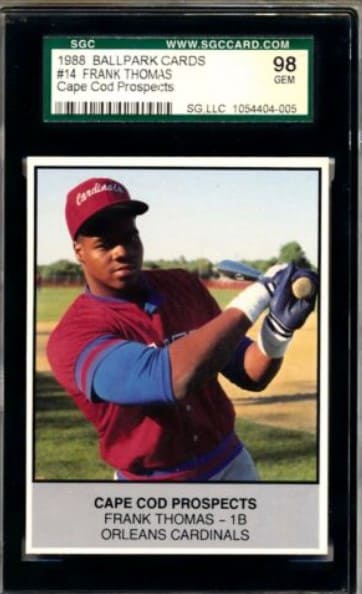 Cape Cod Prospects cards were always made for players that were thought to be some of the best talents for the future.

They were released with players from their college days, so you can see a young Frank Thomas with Orleans Cardinals outfit on this card. This is perhaps his most popular card before his official rookie year, especially because of the image.

Today, these cards are still sold and while they might not reach the prices of some rookie cards, the values can still go into the hundreds. 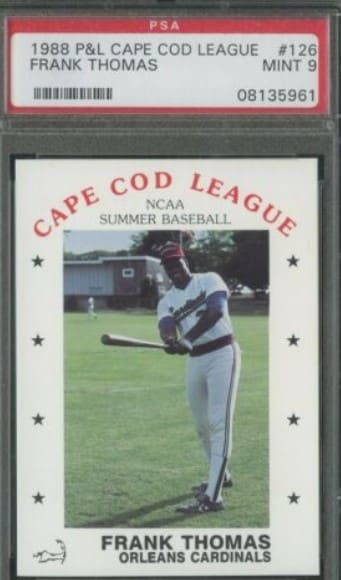 There was another Frank Thomas card released in 1988, and this is from the Cape Cod League set that featured 186 cards.

This card is much more easily accessible than the other two cards from the 80s of Frank Thomas, although it’s also not as valuable as the other two.

While it is true that you’ll have to compete against many other people if you can find this card on a marketplace like eBay, it’s highly likely that it won’t reach the heights of some other cards we’ve featured so far.

The card is noted for its very broad border around the image which features a young Frank Thomas showing off his batting skills. Even though Frank was already showing potential for becoming one of the best ever hitters in baseball.

Frank Thomas is today known as one of the best ever hitters in MLB history, winning two AL MVP awards and several inclusions in the All-Star teams.

He’s still cherished today by many baseball fans, as he still makes the top lists when it comes to having one of the best records in the league.

Because of that, his rookie cards remain highly valued and some of them will likely not lose value in the future, so they are great investments that you should consider as a card collector.