Chis Paul, or CP3, is one of the biggest basketball legends of the third millennium. He was named in the NBA All-Star team 11 times. And just when you think you’d write him off due to injuries, the iconic No.3 just keeps coming back better.

In this article, we’re going to go down memory lane and take a look at some of the most memorable and valuable Chris Paul rookie cards.

The thing with Chris Paul’s rookie cards is that no matter which card you choose, you’re always going to have people interested.

He started his stellar NBA career with the Hornets, so you’re going to have many Hornets fans competing for these cards.

But despite that, fans of other teams still remember CP3 fondly – Houston Rockets, LA Clippers, Phoenix Suns, and even OKC Thunder fans are looking for Chris Paul rookie cards of all types. 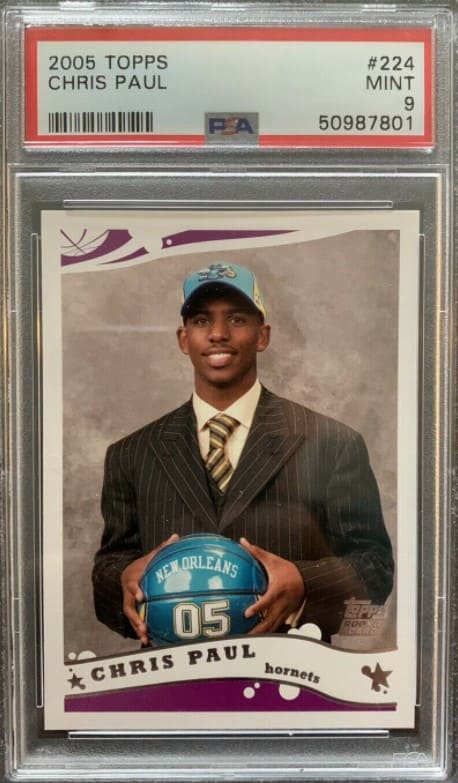 Let’s start with a more affordable option. Here we have a 2005 Topps Chris Paul rookie card, which is one of the most widely available CP3 rookie cards, and among the least expensive ones as well.

It shows us a Chris Paul in his draft night suit, which is a common theme with many of these Topps rookie cards.

If you’re looking for something that won’t cost you your kidneys, then this might be a sensible card to pick. 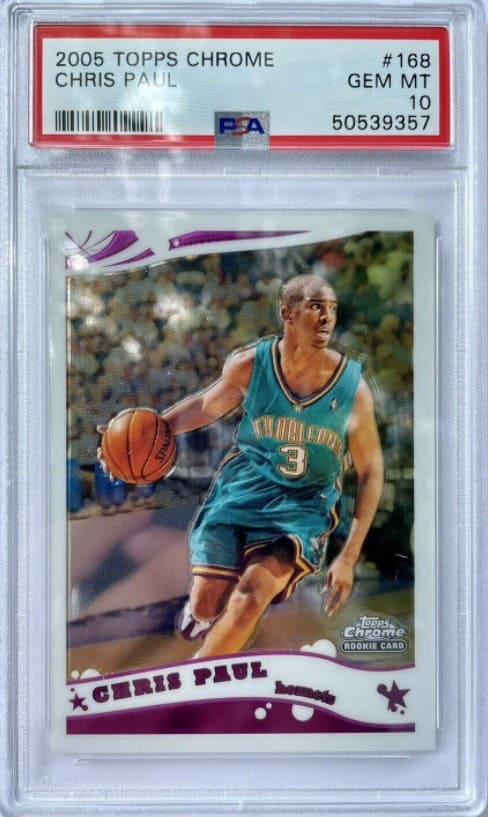 When it comes to basketball rookie cards, you simply can’t look past the Topps and the Topps Chrome cards. These are some of the most historic, but also fantastic-looking cards that you can find out there.

This card is undoubtedly among the more mainstream CP3 rookie cards. It represents a good starting point whether you’re a more budget-minded collector (even though it might cost more than $1000 – but that’s expected when it comes to Chris Paul cards) or a more mid-range collector.

And we must not forget to mention the different refractors that come with this card.

The Refractor parallel is the most common (999 copies), followed by the Black Refractor, Gold Refractor, X-Fractor, and of course, Superfractor (1 copy). 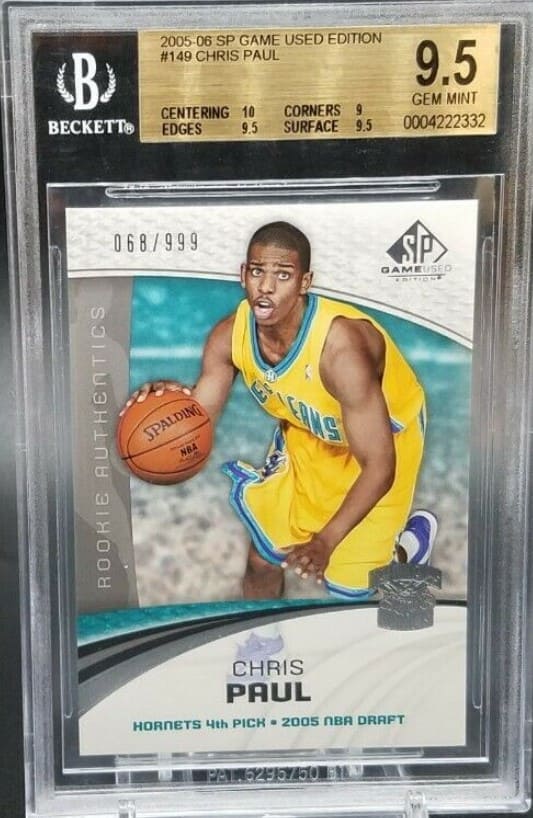 The SP Game Used Chris Paul rookie card brings a lot of different elements together. Namely, you’ll see a mixture of ice-blue, white, and gray mixing up nicely on the card with an action shot of CP3 in front.

And of course, there’s a limited number of these cards – 999 of them, to be more precise. With each card, you’re getting a serial number, so you’ll feel like you’re getting something unique and tailored specifically for you.

The base card is relatively affordable, but if you’re looking for a bit more variety, you can also choose from the many different parallels that bring different foil colors to the table. 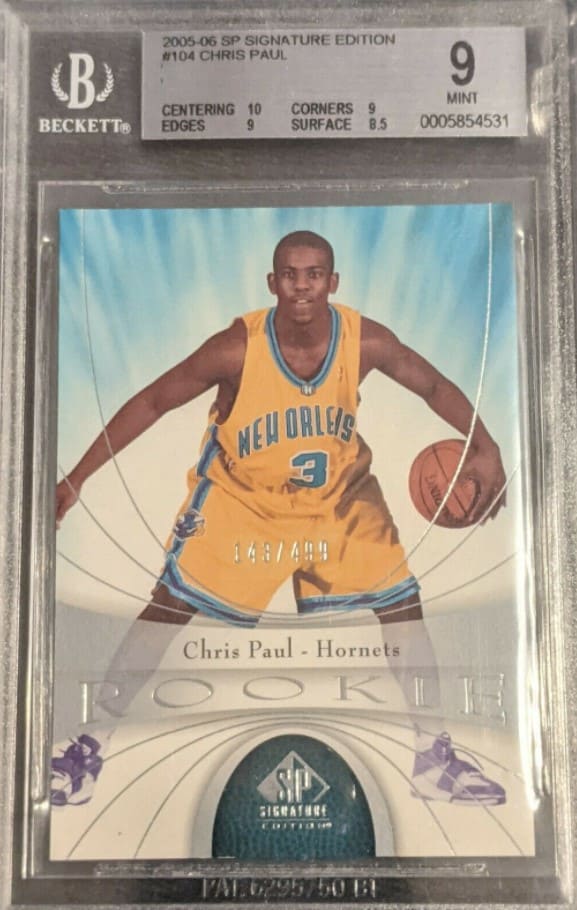 Now, if you liked the look of the previous SP card and you felt like it was missing a more simple design, then you might opt for the SP Signature Edition card.

It offers a similar array of colors to the SP Game Used card – the main difference here is how the background colors are put together on this card. You might find that it’s a bit more elegant than the Game Used card, but that’s down to personal preference.

There’s also a shorter print run with this card – only 499 copies. You can also choose one parallel, which is the Gold parallel. However, that one is particularly hard to find and if you can locate it, it’s going to be pretty expensive. 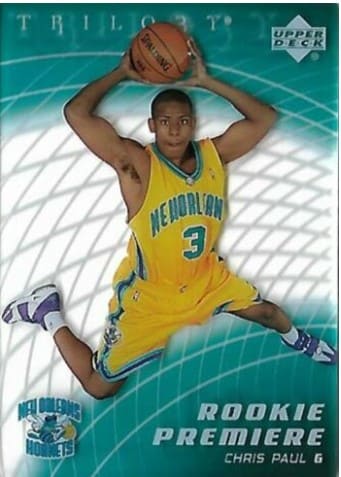 Upper Deck Trilogy might not be a card brand that you’d necessarily think of when talking about basketball cards.

That’s because this brand was initially more popular with hockey card collectors. However, the company started making some cards for the basketball market in the early 2000s, and this Chris Paul card fits that era.

While it does not have a signature, it still has a limited print run of 599 and an intriguing design.

If we were to place this card into a category, it would certainly belong to the budget-mid range category, so if you’re looking for a card from that price range, then this one might fit the bill nicely. 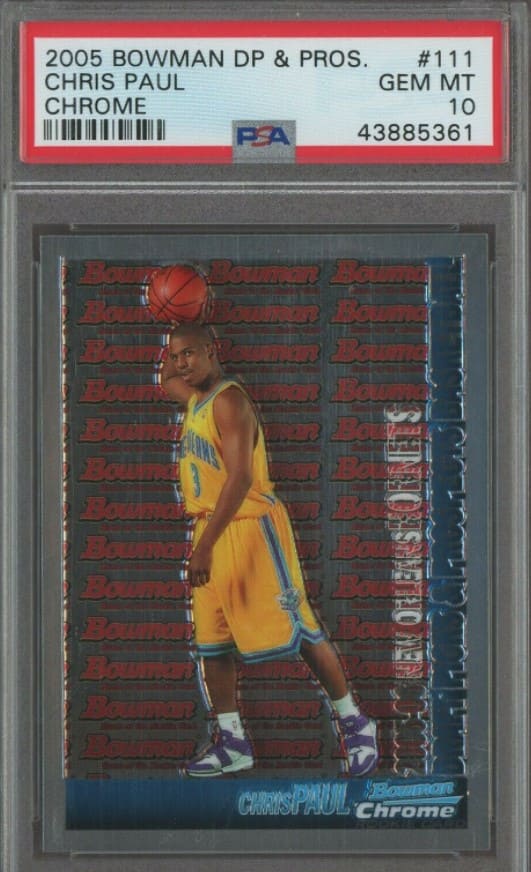 It was especially noted for its unique design that was certainly very different from the rest of the cards back then.

In the background, you have the word “Bowman” repeated several times, while in the front, there’s a nice portrait of a young Chris Paul in a yellow Hornets jersey.

Available for mid-range card collectors, in particular, the Bowman Chrome card is one of the more popular choices on this list without a doubt. 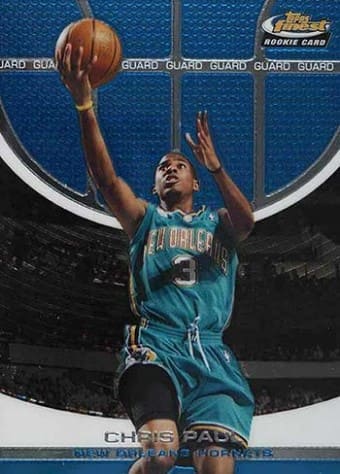 The Topps Finest cards from 2005 are one of the most popular Chris Paul rookie card options, without a doubt.

They were known for their unique appearance and of course, the many different refractors to choose from.

You could find refractors of this card of all types and colors, so there’s little surprise why this card was getting all the hype back in 2005 – and still is.

One thing you do have to know is that this card might cost you a bit more to get, especially compared to some cards we’ve already had on this list. It’s well in the mid-range category but some parallels will reach steep prices. 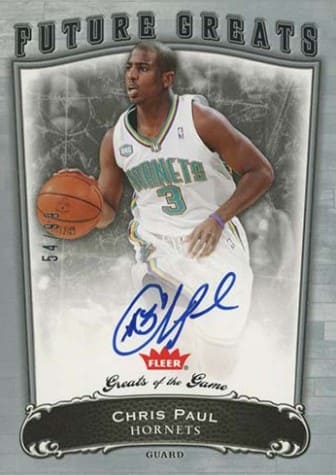 In 2005, Fleer released a line of cards called “Future Greats of the Game” which was meant for players that were believed to be great in the future.

This card was to complement the already existing set called “Greats of the Game”, which included the biggest basketballing stars of the past. Together, these two sets would comprise some of the biggest NBA stars – both past and rising stars.

Chris Paul was inducted into the newer generation of Greats of the Game.

Fleer was right to include him in this pack. Today, we can safely say that Chris Paul is going to be viewed as one of the biggest basketballing legends of the 2000s and 2010s. His inclusion in this card set fits the bill perfectly.

However, the problem is that this card is going to be hard to come by. And by hard I mean extremely hard.

Patience is the name of the game if you want to get it. 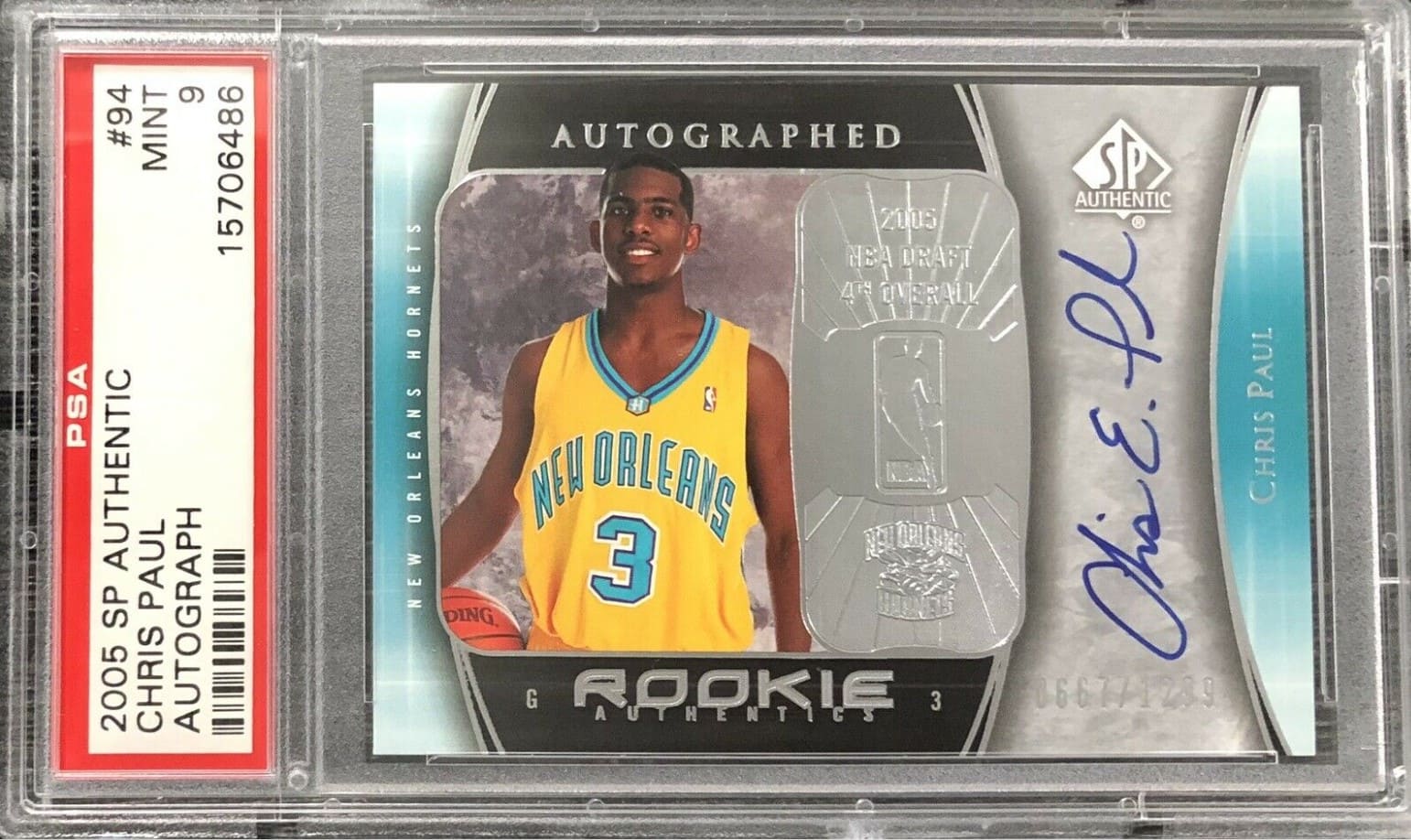 We’re now well into the territory of autographed cards, and SP Authentic is one of the first ones that come to mind when talking about autographed CP3 cards.

It is in the premium category, even though it has a bigger print run than the majority of the cards we’ll mention from now on. With 1299 copies, it’s the most widely available autographed card and a good one if you don’t like to spend extraordinary amounts.

The NBA logo in the middle makes this card even more attractive, even though it lacks some elements that other premium cards have going for them. 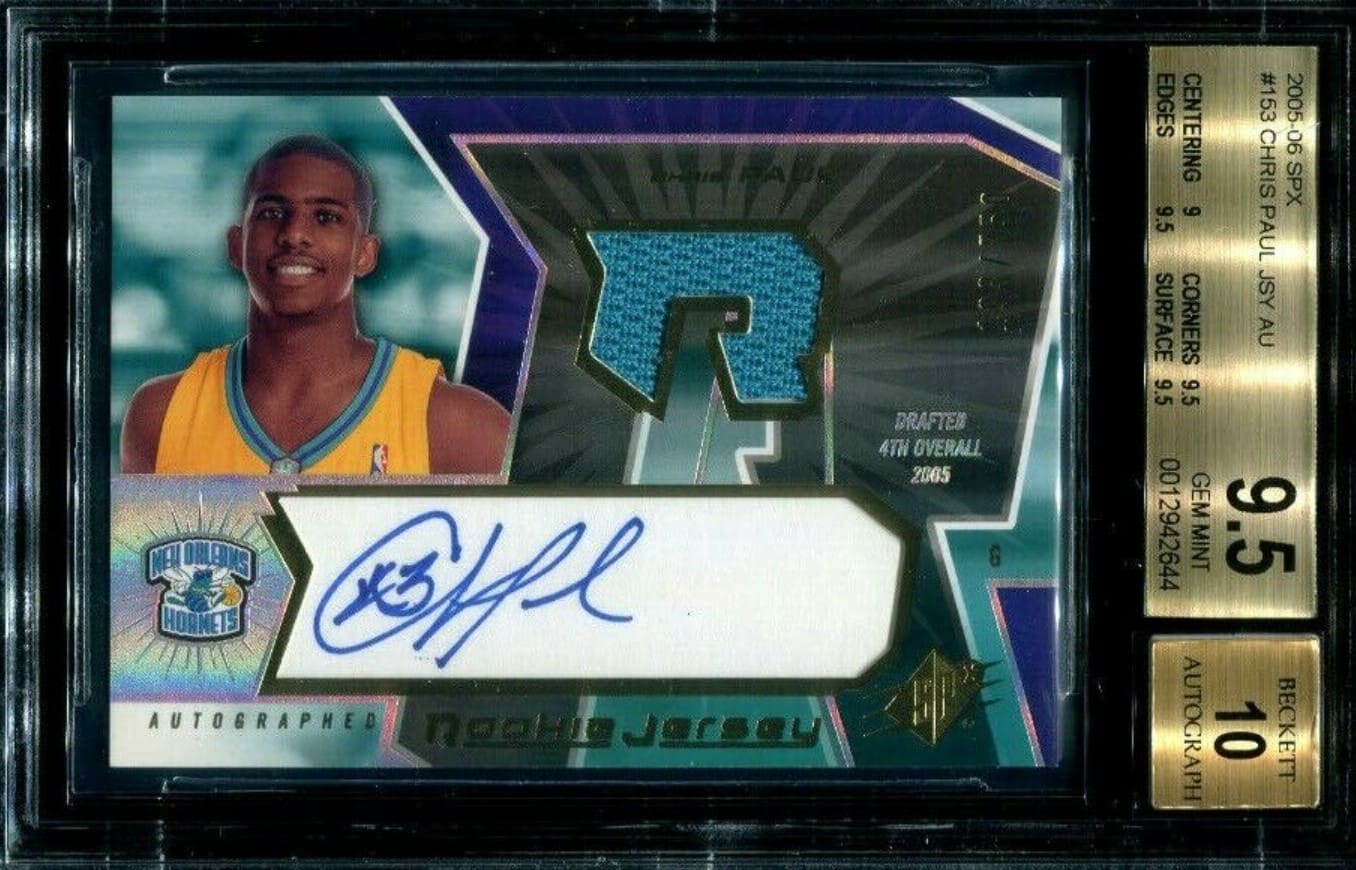 The 2005 SPx Chris Paul card is the first card on this list that we can safely say belongs to the premium category of cards.

It has an autograph, a patch of jersey, and that famous shiny look that followed all premium cards from the 2000s.

If you take a look at the listings for this card, you’ll see that the prices will start to vary wildly. You might have some luck finding slightly cheaper cards that are currently being bid on but expect to be facing quite a lot of competition to get it.

With SPx, we’re used to this sort of design.

We’ve seen all kinds of SPx cards in the past, and some designs were some of the wildest, especially considering that many of these come from the 2000s. This colorful card is widely available nowadays, although relatively expensive as well. 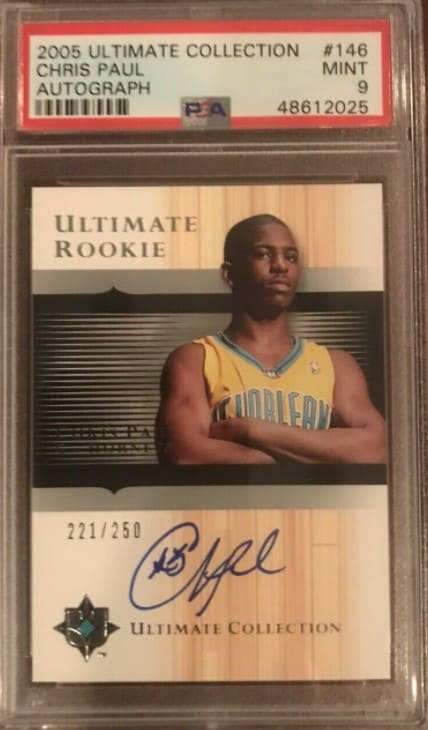 The Ultimate Collection CP3 card from 2005 is one of the most hotly sought-after cards from the early 2000s.

It has a distinct hardwood background with the standout feature being the on-card signature that was so rare of cards from that time period.

One of the slighter issues about this card is that the black background where the image is makes the text slightly harder to read, but that’s a minor annoyance that will probably not bother the majority of collectors.

Plus, there’s a limited print run of only 250 when it comes to this card, so the supply is not great for this card, which means that the prices for this card are only going to increase in the future. 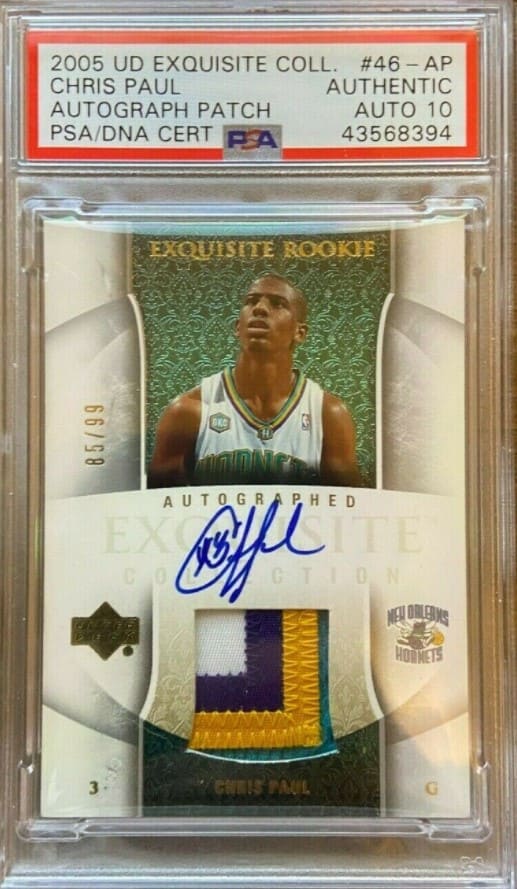 When it comes to premium CP3 rookie cards, there could be no other winner than the 2005 UD Exquisite Collection rookie card.

This is perhaps the most expensive and most valuable Chris Paul rookie card to date, as it has everything you’d come to expect from a premium card – an on-card signature, a patch of a match-worn jersey, limited print run, and elegant design.

Only 99 of these cards were ever made, which makes it even harder to find this card.

And the cards that will be listed on various marketplaces are going to cost a small fortune. You simply can’t find a card of this type that will not cost at least several thousand dollars and potentially well into the five-figure sum.

You might find some ungraded cards that will not cost as much, but even the ungraded cards will often go into the territory of thousands. Have your cash ready if you want to get this card.

How much is a Chris Paul rookie card worth?

A Chris Paul rookie card will be worth anything between $250 and $20.000, depending on the type of card you’re getting, its condition, and the availability of the card. The cards that are not as widely available might end up costing more than $10.000, especially the cards with autographs and jersey patches.

Which is the best Chris Paul rookie card?

The 2005 UD Exquisite Collection Chris Paul rookie card #46 is seen as the best and most valuable Chris Paul rookie card. The problem with this card is its availability, though. There were only 99 of these cards printed originally, so finding one might prove to be a challenge. They’re also quite expensive, so you’ll need to be prepared to spend several thousand dollars at the very least.

If you want some high-end stuff, here’s some great options.

Chris Paul rookie cards remain to be seen as some of the most hotly sought-after pieces of memorabilia from the 2000s, and there’s no surprise about that. CP3 is one of the most influential players in the NBA in the last 20 years, so the popularity of his cards is going to be on the up for the next few years and decades.