Playing professional basketball for 21 years is not something that every man can do, but Bob McAdoo did it and the world of basketball appreciated it!  Bob McAdoo played 14 seasons in the NBA with the Buffalo Braves (modern-day Los Angeles Clippers), New York Knicks, Boston Celtics, Detroit Pistons, New Jersey Nets, Los Angeles Lakers, and Philadelphia 76ers.  But he wasn’t finished yet, because he went on to play 7 more years in the Lega Basket Serie A (LBA) in Italy.  McAdoo was often seen as “unstoppable” because he could shoot from anywhere on the court.  Perhaps the accomplishment he is most proud of is winning an NBA Championship, twice, with the Los Angeles Lakers.

Let’s take a look at Bob McAdoo’s rookie card and some other notable cards. 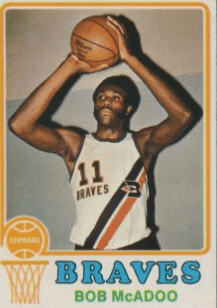 This relatively simple card is considered Bob McAdoo’s rookie card.  Despite not being as “busy” as past cards from Topps sets, this is a really cool card.  Bob McAdoo is posed lining up a shot.  You can’t see his full height but you can measure his arm length and know that he was a formidable player.  The team name, “Braves” is written on the front but the city name is absent.  Bob McAdoo’s name is written under the team name. On the bottom left-hand side there is a floating basketball with the position name.  On the back of the card, there is a description that states that Bob McAdoo won the NBA Rookie of the year award following his 1972-73 season.  In the statistics section at the bottom of the card, the city name, Buffalo, is listed.

The Topps 1973-74 basketball set is not as well known as previous Topps sets, but it still contains some pretty good rookie cards including Bob McAdoo.  It also contains cards from many future Hall of Famers and impressive players of the era.  Cards from this set are attainable.  The Bob McAdoo rookie card may be located for a decent bargain but high-grade versions of the card may cost some dollars.  It is definitely worth it to have a card from this man early in his career!

It’s not just the rookie card that’s worth collecting. There are plenty of other notable Bob McAdoo cards. 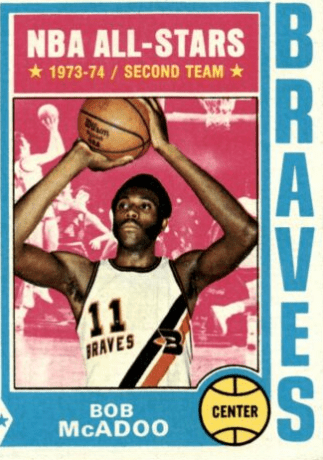 Another early Bob McAdoo card is this Topps selection from the 1974-75 set.  Like the card from the previous year, this card has an image of McAdoo posed lining up for a shot (the image looks rather familiar, right?).  The background for this card is an enlarged photo whose color was turned red and it displays basketball action.  The team name is written in large letters on the right hand side of the card and Bob McAdoo’s name is listed at the bottom with his position listed in a yellow basketball to the right.

The 1974-75 Topps set contains some valuable rookies, but cards from this set are obtainable.  Topps continued the practice of listing the “NBA All-Star” honor on the top of each individual player’s regular card rather than creating a subset of All-Star cards.  The 1974-75 Topps set did alter their design from the previous year.  The team name being in large, bold letters on the side of each card was the most obvious change.

The 1974-75 Bob McAdoo is available and collectors can obtain it with relatively little money.  Fans of classic NBA basketball will always want cards from some of the best players in NBA history, so Bob McAdoo cards will always be in demand. 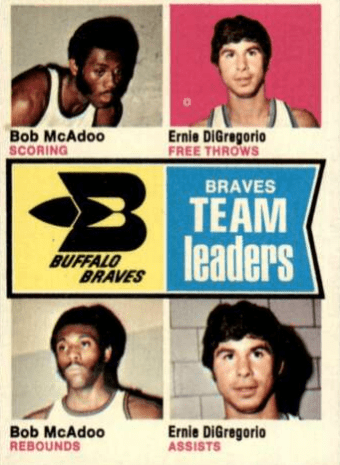 This card from the 1974-75 Topps set is a pretty cool card.  It shows the Team Leaders from the Buffalo Braves for the previous season.  Bob McAdoo held the team lead in Scoring and Rebounds in the 1973-74 season, 2 of the most important statistical categories for any team during a season.  Ernie Degregorio is also on the card for holding the team lead in Assists and Free Throws.  Many NBA historians have described Bob McAdoo’s play from his early years as “unstoppable.”  So, it only makes sense that he would grace a Team Leaders card, right? 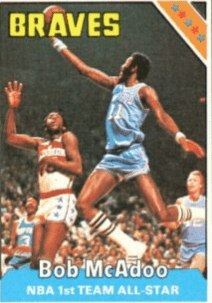 Now we get to some powerful basketball action shots!  Starting with this Topps card from their 1975-76 set, we see an image of Bob McAdoo sailing through the air about to sink a lay-up.  This must have been a familiar sight for opponents of the Buffalo Braves in the first half of the 1970’s.  The card displays the team name at the top and Bob McAdoo along the bottom.  Below McAdoo’s name he receives an NBA 1st Team All-Star honor.  Collectors can find this card, but since it is the 1st piece of cardboard that displays a McAdoo action shot, it can be significantly priced.  Especially higher graded versions of the card.  Despite the price, collectors may find that it is worth it to own one of these Bob McAdoo cards. 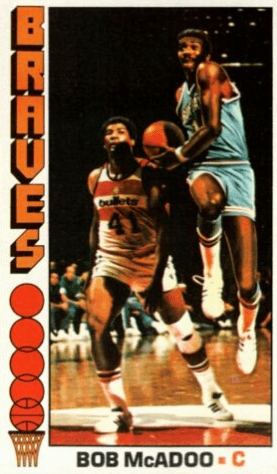 Topps delivered another unique basketball card set in 1976-77, similar to their “Tall Boy” cards from 1969-1971.  This set, though, was even larger than their “Tall Boy” cards.  Measuring 3 ⅛” x 5 ¼”, these cards were popular with fans and their size definitely may have assisted autograph seekers.  The image on the front of the card is of Bob McAdoo gliding through the air toward the basket.  This card is also the last card released of Bob McAdoo playing for the Buffalo Braves, since in December 1976, he was traded to the New York Knicks.

This card may be a little more rare than other Topps cards due to its size, but collectors can still locate it. Collectors should always be interested in Bob McAdoo cards from his stellar career with Buffalo, so this card should remain popular. 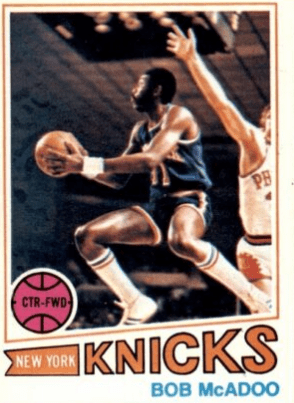 Again, Topps captured an image of Bob McAdoo hovering in the sky in this action shot for their 1977-78 release.  This card is the first Bob McAdoo that features him with the New York Knicks.  McAdoo would move around considerably over the next few years, until…, well, I will highlight those years next!

Topps had returned to releasing typical size cards with this set.  The Bob McAdoo card is obtainable for collectors, possibly at bargain prices, and is a nice mid-NBA career card. 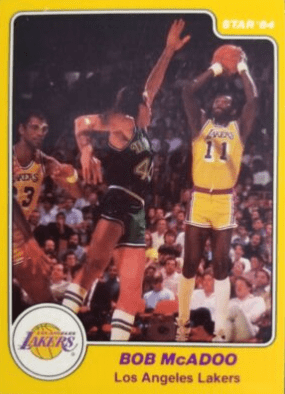 As I stated in my previous description, Bob McAdoo bounced around to a few teams before landing with the Los Angeles Lakers.  In the 1980’s, the Lakers were dominant.  Bob McAdoo was traded to the team in late 1981, and all 4 years he played for the Lakers, they went to the NBA Championship.  McAdoo helped the Lakers win the Championship in 1982 and 1985.

This 1983-84 Star Basketball set was a sigh of relief for collectors.  After Topps stopped producing basketball cards in 1982, fans in the hobby had nowhere to turn.  But the Star company stepped up and released this set.  This Bob McAdoo card is important and popular because it is the first card of him playing for the Lakers during their “Showtime” era.  Collectors can find these cards, despite their rarity, and they are obtainable.  All collectors should be careful, though, because Star cards have been known to be easily counterfeited. 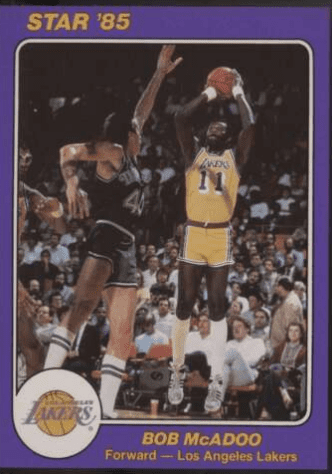 Star released another set in 1984-85, but also released some unique 5”x7” cards.  This Bob McAdoo card is rare but collectors can find it if they look.  It may remain popular due to its “oddball” format.  Despite the fact that it appears Star reused the same image as the 1983-84 Bob McAdoo, the card is still sought by collectors of Bob McAdoo cards.  Again, collectors should use caution that they don’t pick up a fake Star card. 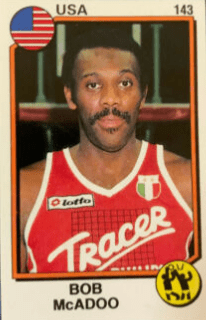 I will end with perhaps the rarest of the Bob McAdoo cards on my list, the 1988 Panini Supersport Bob McAdoo.  This sticker card was part of a set of multi-sport cards released in Italy.  After Bob McAdoo left the NBA, he played 7 years in the LBA in Italy, where he also won a FIBA European Champions Cup.  This card is one of the cards from his European playing career and collectors might find it, but a good condition may carry a price tag.

Find The Cards on eBay

Here’s a list of the ten most expensive Bob McAdoo cards on eBay right now.

It is highly likely that Bob McAdoo cards will become more and more popular as time passes.  McAdoo was inducted into the Naismith Basketball Hall of Fame in 2000, and was named to the NBA 75th Anniversary team in 2021.  From the time he was drafted by the Buffalo Braves with the 2nd overall pick in the 1972 NBA Draft, Bob McAdoo made his presence felt.  He won an NBA Rookie of the Year Award in 1973.  He was named the NBA MVP in 1975, and he was a 5 time All-Star.  He won 2 NBA Championships as a player with the Los Angeles Lakers, won a championship in Italy, and has coached for the Miami Heat for the last couple of decades and was part of the organization that won a few more NBA Championships.  Bob McAdoo has had an impressive career and he has devoted his life to basketball.  The NBA has recognized his achievements and his cards should gain in popularity.