The Willie Mays rookie cards are still some of the most demanded baseball cards, even decades after “The Say Hey Kid” concluded his playing career in 1973.

He is also one of the best and most famous baseball players in MLB history.

His stats alone are impressive: he was included as an All-Star player a whopping 24 times, which was a run that not many baseball players can say they achieved.

Officially, the rookie year of Willie Mays was 1951, but there is only one card that came out this year that can be considered his rookie card.

That’s why many people also consider some cards that came out in 1952 as his rookie cards, although there is still some debate around that issue.

First, we’ll take a look at the Willie Mays rookie cards, and we’ll also have a look at some of the other popular cards of this player from his later years.

Let’s start with his rookie cards, shall we? 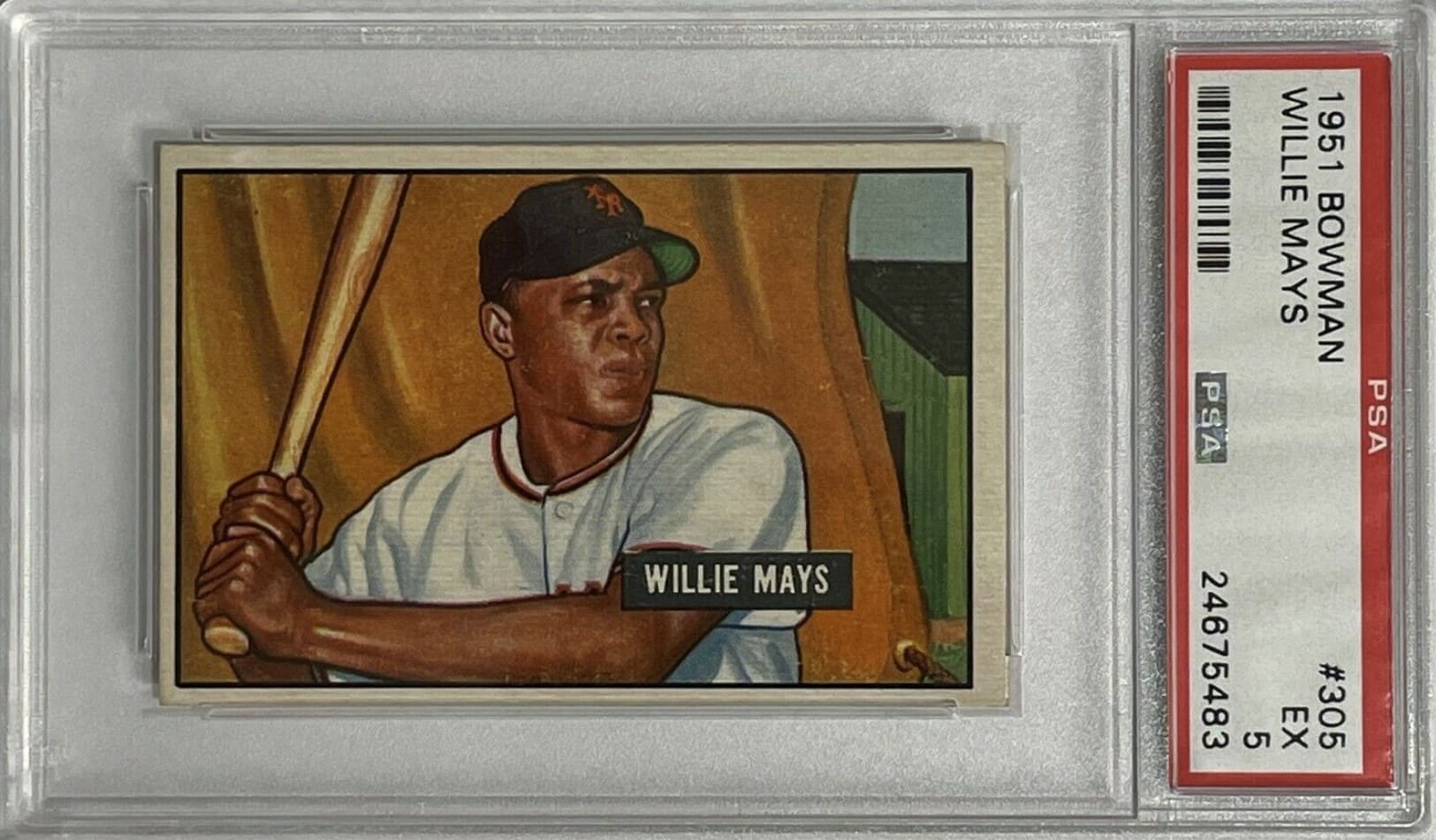 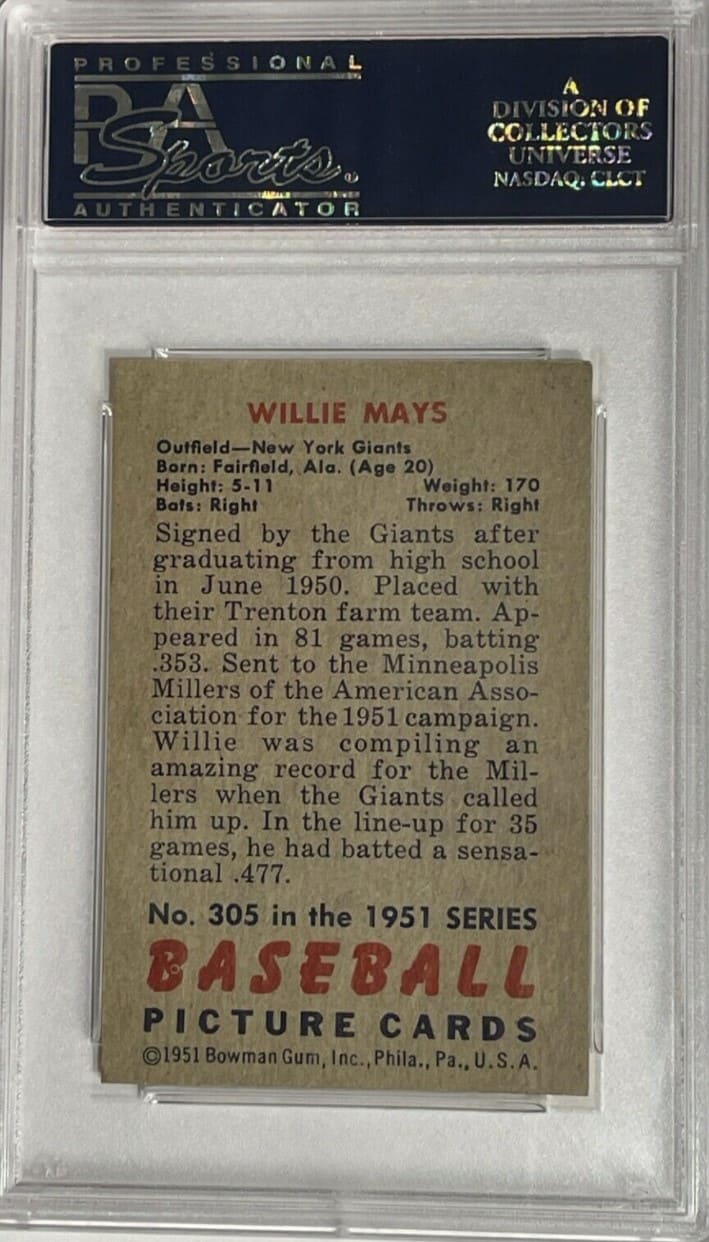 The interesting thing here is that Bowman almost didn’t include Willie Mays in their card set in 1951.

You can see this by the high number that Willie Mays’ card had in the pack – 305. Altogether, there were 324 cards in this set of cards. It’s possible that Bowman created this set later in the season, which allowed them to include players that started to shine a bit later on.

In his first season, Willie Mays won the Rookie of the Season award after an impressive showing. He finished the season with a .274 batting average and 20 home runs, some of the best numbers for a rookie up until then.

Willie Mays is portrayed on the card in his batting position, and the portrayal was painted on the card, which is also an interesting feature of this piece of memorabilia.

Overall, this is one of the more expensive baseball cards from the 1950s and the 1960s. It will cost you a five-figure amount for decently preserved cards, although cards that are in worse conditions are not as expensive. 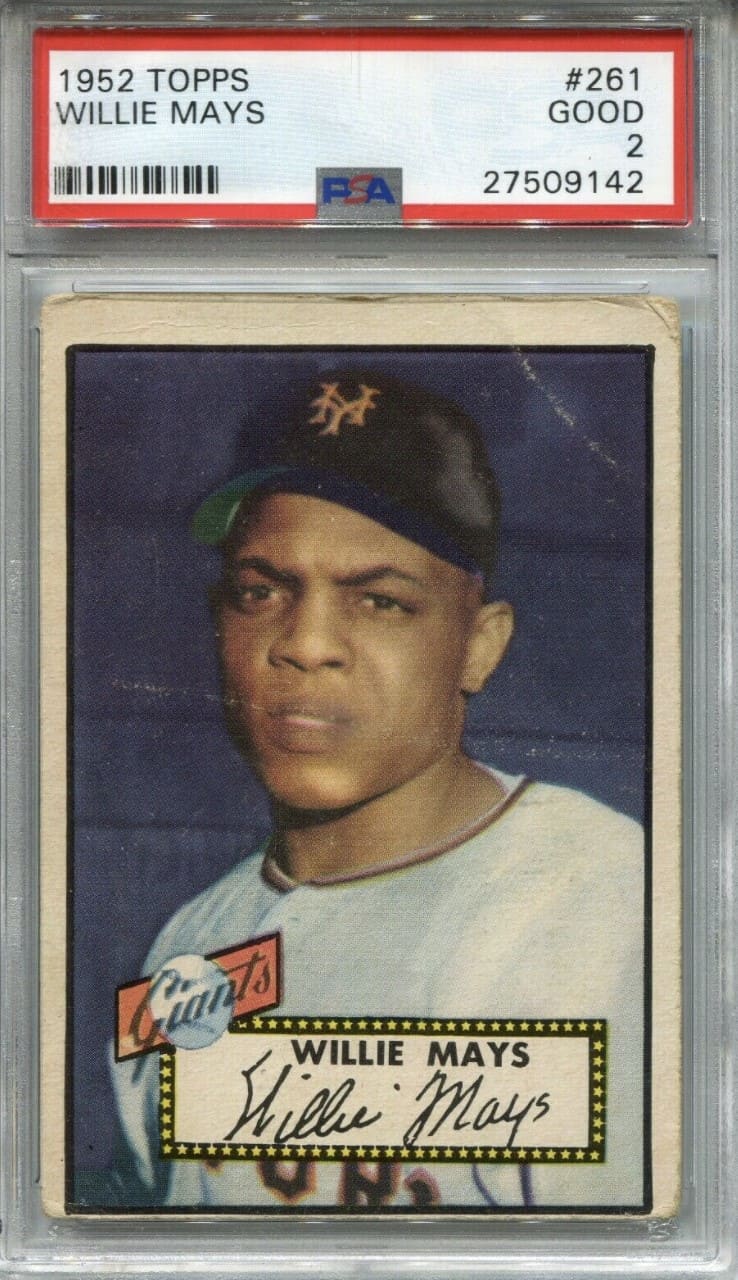 After his induction as the Rookie of the Season in 1951, Topps quickly jumped on the Willie Mays bandwagon and produced one of his most notable cards up to date.

This is still one of the most popular Willie Mays rookie cards, even though it is not the earliest rookie card. Despite that, it is still considered to be a rookie card.

This Topps card is particularly hard to find in a good condition. You will see many cards of this type with a grade that is below PSA 5, which means that higher graded versions will come at a premium price.

Centering issues are the most common with this card, which you can also spot with the above card if you have a keen eye for detail.

In 1952, Topps had one of the best card packs in history for baseball. The set included both Mickey Mantle and Willie Mays, which made it one of the most memorable baseball card packs ever. 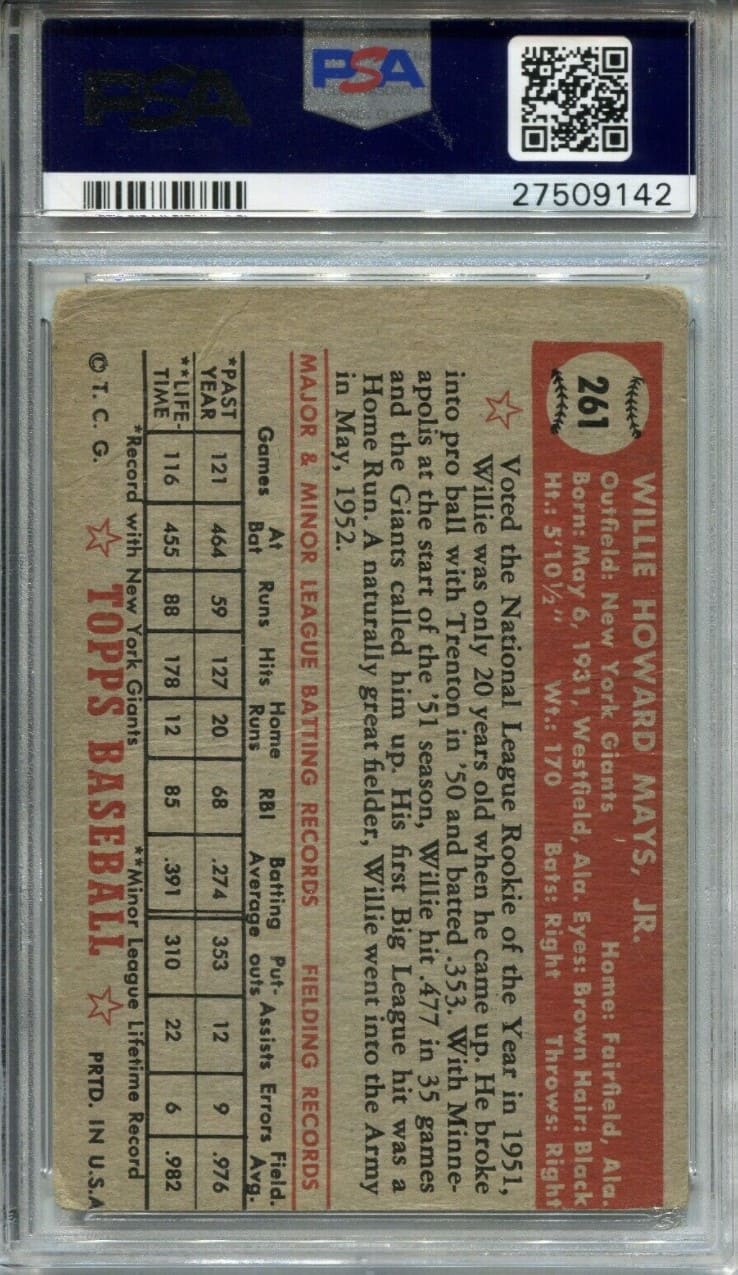 Perhaps another interesting note here to add is that Willie Mays was drafted to the US army in 1952 after finishing a highly successful season with the Giants. 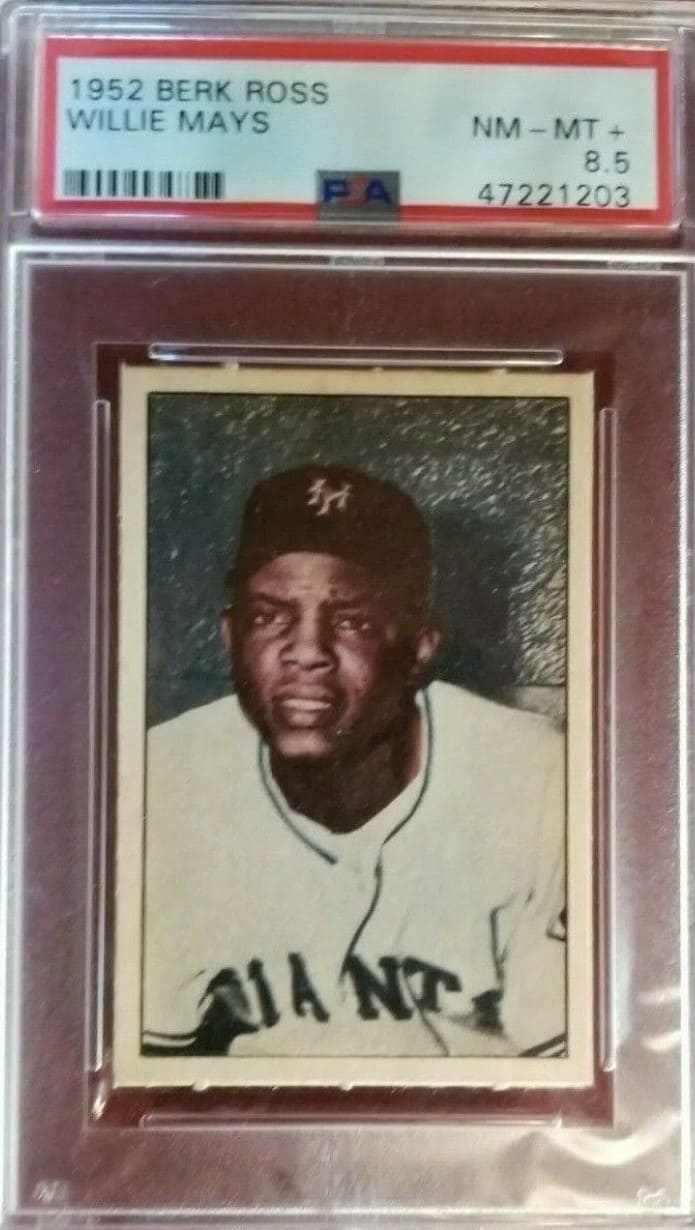 Even though Berk Ross might not be a brand that is as popular as Topps, it is still one of the most popular cards from the 1950s.

Because this card doesn’t come from a major card company, it might be a tad more affordable than the other two cards we’ve seen so far.

However, if you can find this one in better conditions like the card you can see above, it will still cost you a five-figure amount. 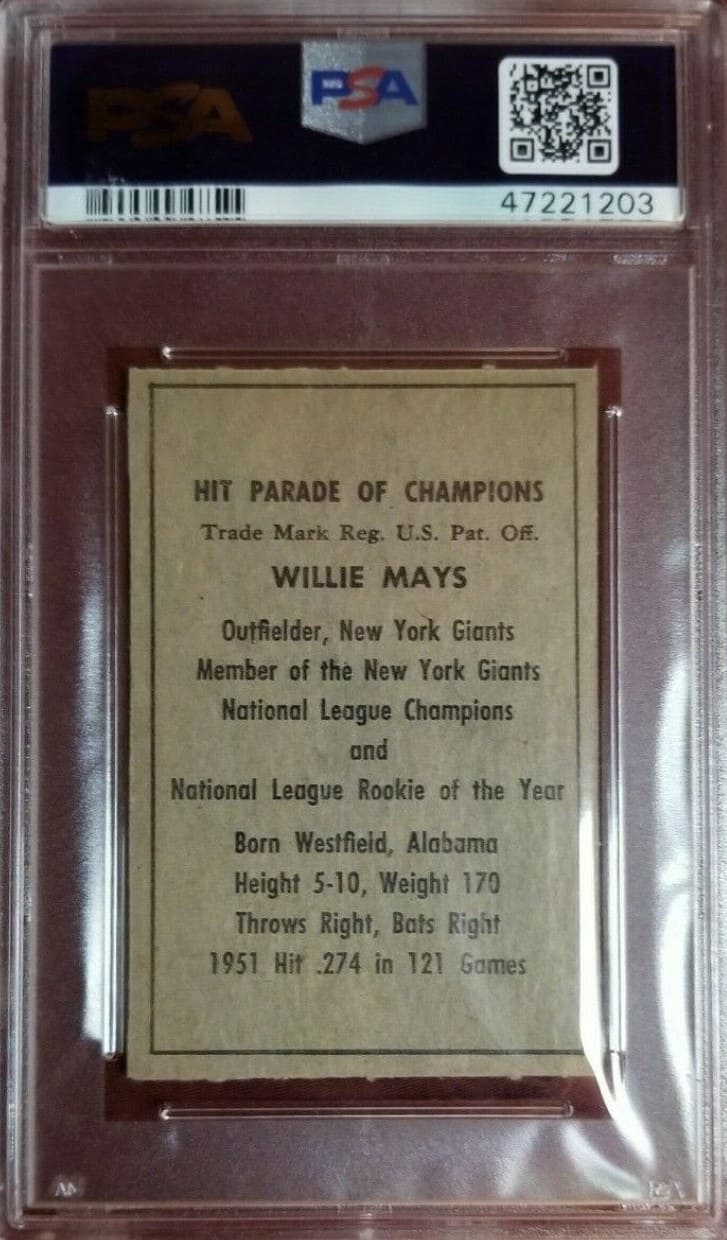 If we check out the back of this card you’ll see that it includes some basic stats about the player and some useful information that you might want to know.

Overall, the card has that typical look and design of the 1950s – no fancy graphics, no additional features on the card. Just the image of the player and some facts about the player on the back of the card.

Now, we’ve gone through the most common Willie Mays rookie cards, but there are many other interesting Willie Mays cards that you can check out that came later in his career.

Here are some interesting Willie Mays cards that you can consider getting (non-rookie cards). 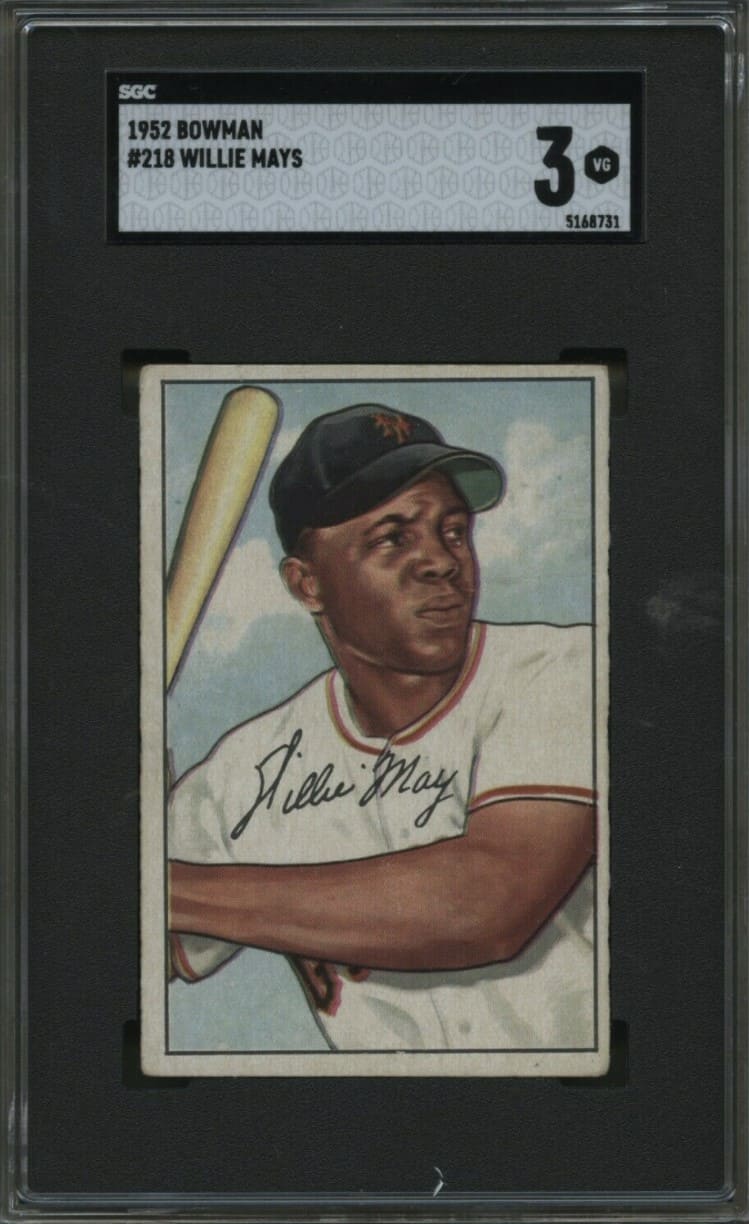 If you take a look at this 1952 Bowman card and compare it with the 1951 Bowman card, you’ll notice that there aren’t many big differences between the two, especially when it comes to the image. You’ll find Willie Mays striking the same batting pose on both cards.

What is different is the coloring and the layout of the card.

For one, this card is laid out vertically and not horizontally, as is the case with the 1951 rookie card.

The other difference is the colors on the card. You’ll also find an autograph of the player, which is incorporated nicely to fit the rest of the card.

This is still one of the earliest known Willie Mays cards, and it will get a lot of attention because of that. However, it is not his rookie card. Despite that, the card remains to be a popular one.

In terms of values, it will not quite reach the heights of the rookie card. However, for the best grades of this card, you might have to pay several thousand dollars to get it. 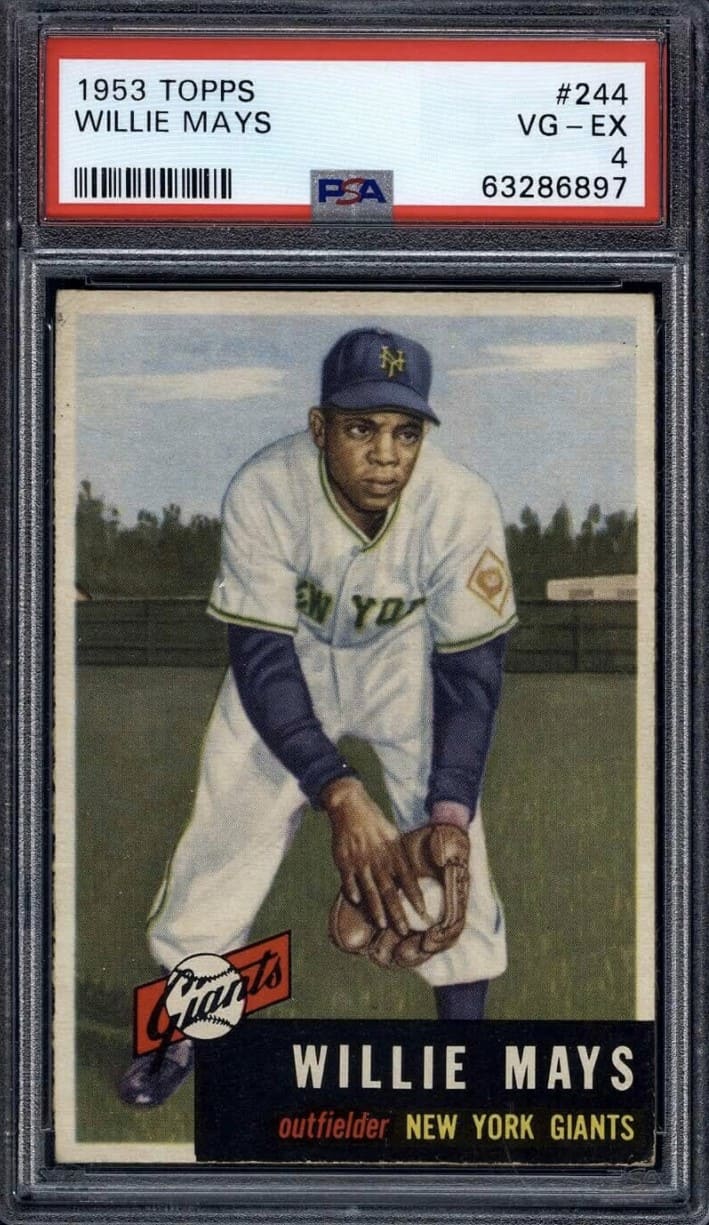 Topps baseball cards from the 1950s tend to be the most popular types of cards for baseball players. These were some of the most sophisticated and advanced cards with the many additional graphical features included on the card.

As you can see, the Topps card of Willie Mays from 1953 follows a similar type of design as the previous cards. It has the illustrated image of Mays, and also includes some graphical elements on the bottom of the image.

As is the case with old cards, the condition of the card will dictate the price.

Cards that are better kept and have a grade of at least PSA 4 or 5 will cost several thousand dollars.

On the other hand, if you don’t want to have the best-graded cards possible and you just want to own this card regardless of the condition, you might be able to get yourself one of these for much less. 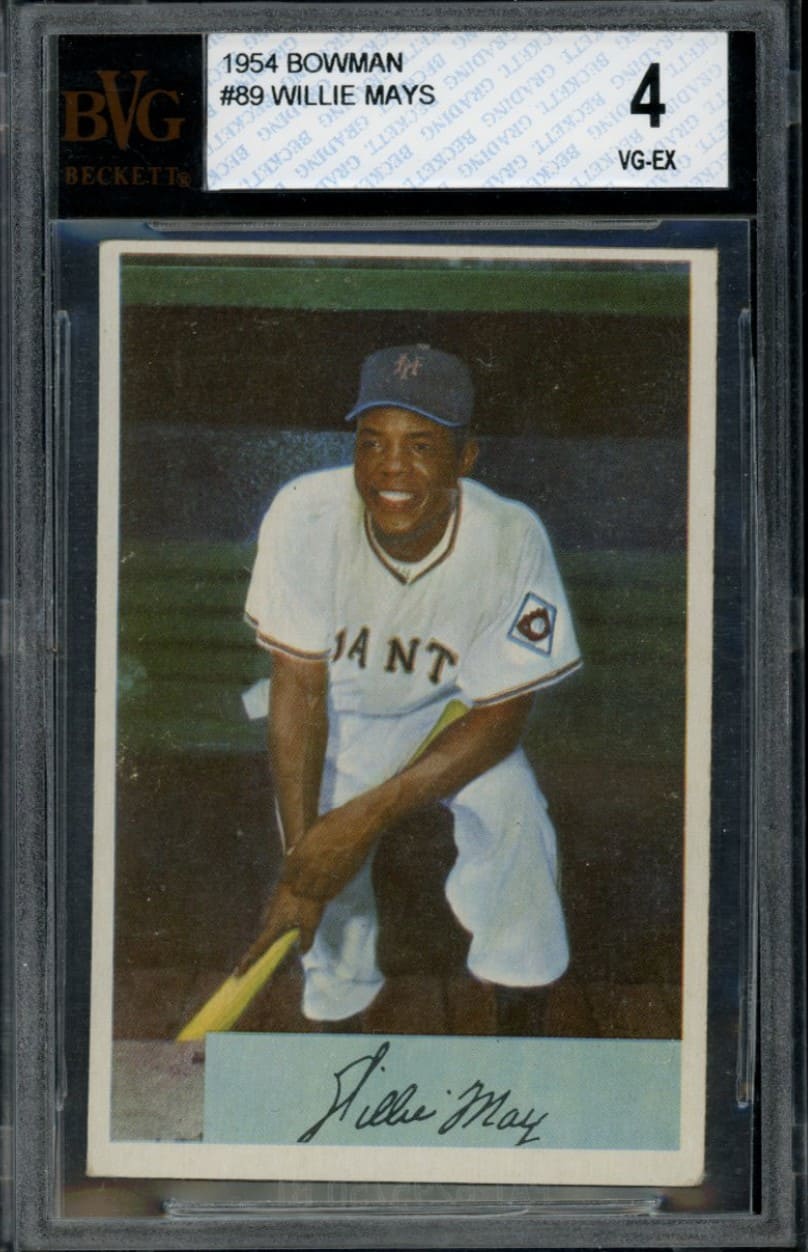 You can see Mays with a beaming smile. This card is one of the first cards to include a real image of Mays and not just the illustration as so many of the previous instances we’ve seen so far.

Though, the Bowman cards of the 1950s remained largely the same as they all incorporated the player’s signature on the card.

This card is not nearly as expensive as the 1951 Bowman rookie card, but it can sell for respectable values.

In the best conditions, this card will sell for several thousand dollars, although you can get it for much cheaper if you don’t want to have the most expensive cards. 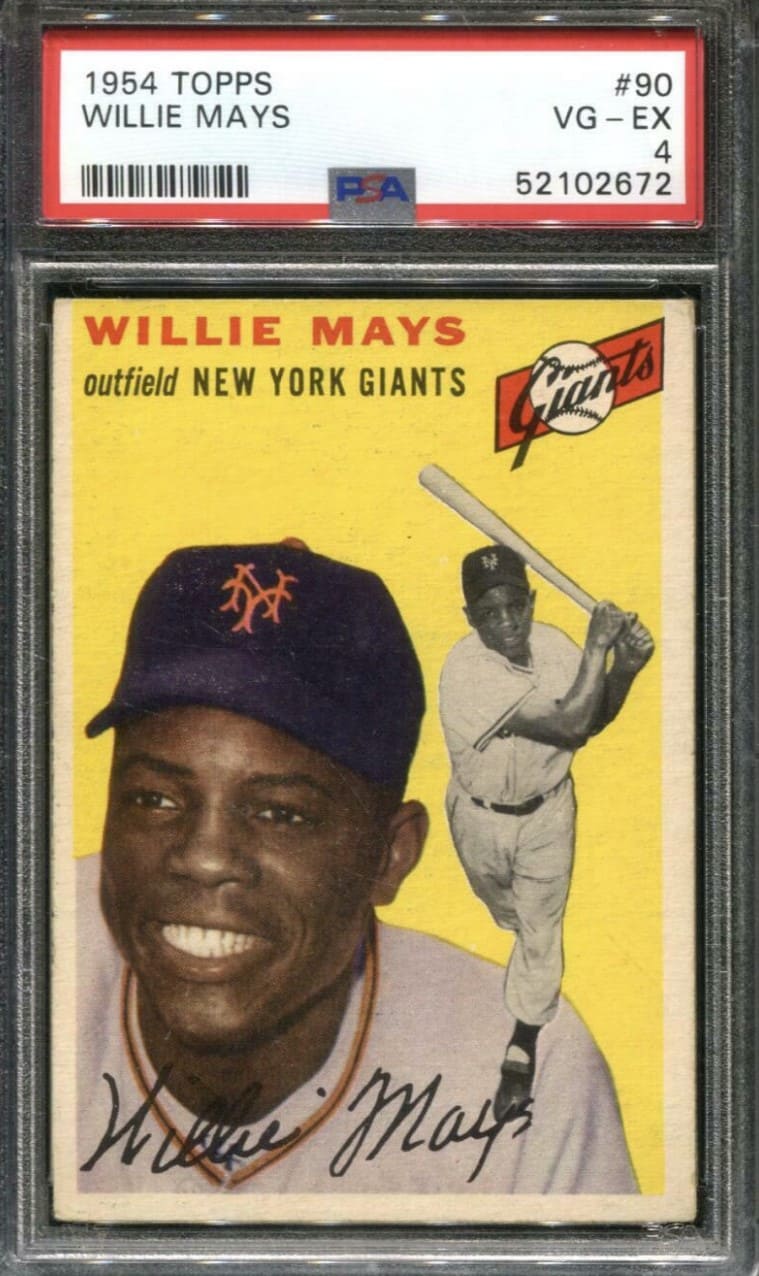 Last but not least, we should also give a special mention to the 1954 Topps card.

This one is a bit different from the rest of the Topps cards that came out earlier. It featured that famous yellow background and two images of Willie Mays. However, it didn’t include an autograph, which is a bit of a shame.

Still, this card from 1954 depicts Mays in the prime of his career when he won the World Series title. As such, it is one of the most popular cards of this player, even though it is not his rookie card.