O.J. Simpson is arguably one of the best running backs in NFL history.

He was one of the best athletes in football known to date, as he was particularly known for his rushing ability; his athletic style of play scared the life out of opponents. He was known as the first player to rush for over 2000 yards in an NFL game.

Sadly though, these days most people know him today for his off-the-field problems…

But if you’re someone who admires O.J. Simpson, also called “The Juice”, as a footballer player, then you’re in for a treat with these O.J. Simpson rookie cards from 1970.

There’s not a great deal of options when it comes to O.J. Simpson rookie cards, but what is there is extremely valuable. 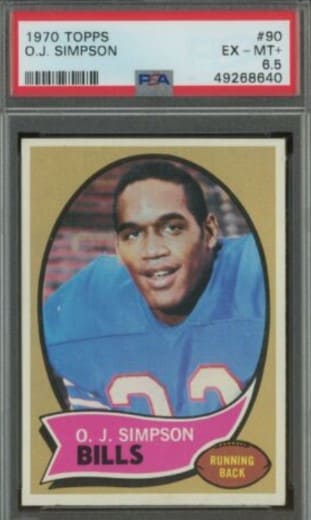 So, this is the one – the best and most well-known O.J. Simpson rookie card.

It’s the go-to rookie card of Simpson for many collectors because:

1. It was one of the only O.J. Simpson rookie cards released by a mainstream company like Topps
2. It has a simple design that was considered as a premium card in 1970 but is still appreciated today for its classic look and simplicity
3. They represent a challenge for collectors because finding this card in higher conditions is very difficult (and damn expensive).

This particular card in the image is one of the higher graded cards I was able to find on eBay at the time of writing, and I imagine it’s also going to be difficult for you to find the perfectly graded card of this type.

According to PSA, there is only one PSA 10-graded card of this type. That’s insane if you think about it – out of around 3000 cards that are still out there, only one was kept at its best condition – at least when it comes to graded cards.

As for lower grades, PSA 9 cards are still rare, with only 116 copies that have been graded with this mark. PSA 8, 7, and 6 are far more common and easily available, though – each category has around 600 cards available.

What does that mean for the value of the card?

Naturally, for the higher graded cards, you’re going to have to pay the premium price.

The higher graded cards of this type will cost several thousand and can potentially go into five figures with its prices.

PSA 8, 7, and 6 is where the sweet spot is for most collectors, I think. These grades are far more affordable and more importantly, easily available. There are hundreds of copies of that type, so if you’re happy with slightly lower grades, these will be great.

Design and Back of the Card

Taking a look at the design of the card, it has the 70s vibe going for it which will still appeal to many collectors today, especially if you love older cards.

The central feature of the card is Simpson’s portrait, which shows a close-up image of O.J. in his Buffalo Bills outfit.

The light-brown bordering is placed around the oval image with a few additional graphical elements on the bottom of the card, which include Simpson’s name and team, and his playing position. 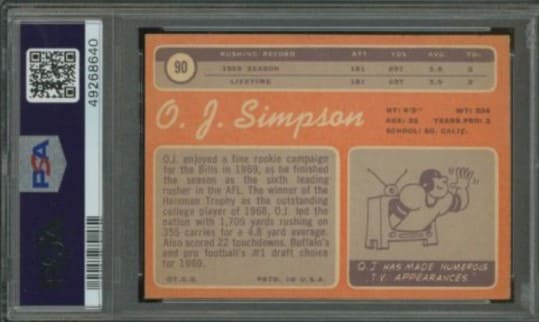 If you turn the card over, you’ll find the following pieces of information:

● Simpson’s record from 1969 and his numbers from that season
● All the data and additional information like height, weight, age, and school
● A description of the player and short biography, including some trivia and stats to make it more interesting
● A small window with a player jumping out of the television saying “OJ has made numerous TV appearances”. It seems as though O.J. was often on television even that early in his career…

In many ways, it’s the standard design that you’ll find on many other Topps cards and especially the Topps cards from the 70s.

What to Watch Out For

If you decide to go for this card, then you’ve made a great choice, because it’s a card that probably won’t lose value anytime soon, despite all the happenings off the field. Those are now probably behind OJ and after being released from prison in 2017, his cards are gaining in popularity again.

One thing that you might want to keep in mind is that this card comes from the 70s when quality control was definitely not as strict as it is for today’s cards. This means that some issues are bound to pop up here and there.

The most obvious one is centering.

Watch out for poorly centered cards when you go for ungraded cards – graded cards will have lower ratings if there is any flaw with centering anyway, but if you decide to go with ungraded cards, then that’s something to keep in mind.

Obviously, also watch out for other issues that come with age, such as surface quality deterioration, corners, and other minor issues that usually pop up after half a century of use.

Outlook for the Card

If you’re looking to get this card and are not sure about its long-term availability, then worry not – older cards are becoming more and more popular, and that trend is not likely to go away anytime soon.

The older the card is, the more value it is going to have (as with almost anything in this world), as long as it is properly cared for.

So a good piece of advice would be to look for higher graded cards if you can afford the investment; if not, buying slightly lower grades will be much friendlier for your wallet, although you might be losing out on some long-term longevity.

Again, it depends on your budget and what you’re prepared to spend. Overall, this card is a decent investment that is likely to stay relevant for decades to come.

So, the Topps OJ Simpson card from 1970 is his mainstream, most recognized rookie card, but there were also other cards from the same year (and some even earlier) that might be relevant if you’re looking for alternatives. 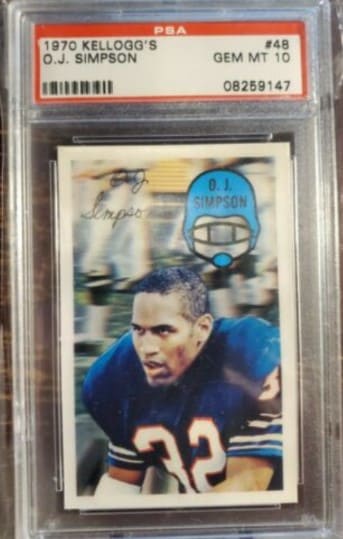 This is the other popular card of O.J. Simpson from 1970 that is also branded as a rookie card – although not as popular as the Topps one.

Kellogg’s cards were primarily meant for kids as they were available in cereal packs to attract the attention both to Kellogg’s products and to football cards. This is why these cards were owned by kids and were not cared for very well, meaning that finding this card in the best conditions will be tough.

The card reveals the hard character of OJ Simpson – you wouldn’t really want to play against a player with this look!

In terms of design, this card is very simple. It has a blue helmet in the top-right corner, white bordering, and of course, the image of Simpson. The top left corner is adorned by the cursive writing of his name, which is often mistaken for his autograph. Just to be clear, it’s not his autograph.

If you enjoy collecting old Kellogg’s cards and you want to have a fun addition to your collection, then this card is a decent choice. It won’t cost as much as the Topps card, and will also be very affordable in lower grades.

For serious collectors, going for higher graded cards might be on the agenda, but that also means spending a bit more. You’re going to have to dig a little bit deeper than for the lower graded cards. 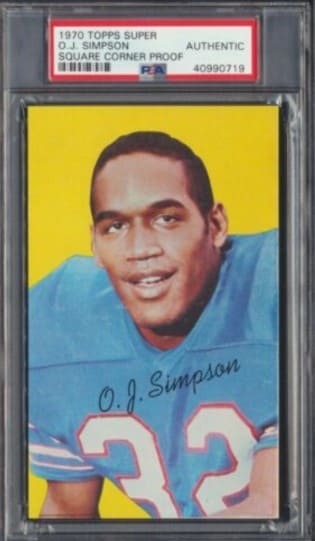 Topps Super cards were issued as supplementation cards for the main Topps set. As you can see, the image on this card is exactly the same as on the base Topps card, but it has a different design entirely.

The main difference is in the borders. There are none on this card, and the card only has the frontal image of OJ Simpson.

This sort of simplistic design will appeal to you if you don’t like a lot of graphical elements on the card and you prefer a clean, simple look instead. There’s also a cursive of his name over his chest, which is the only thing that is added to the card.

It’s larger in size than the main card, and if you’re looking for a slightly more affordable alternative, this is a good choice, as well.

There’s another Topps alternative that you should know about. It’s the Topps Super glossy version, which is almost the same as the Super version, just with a glossy finish and more letters on the card: 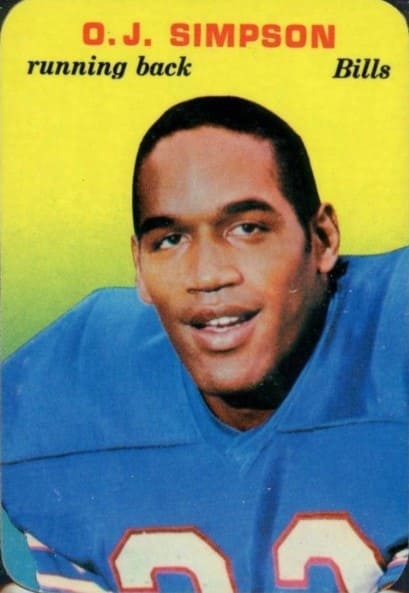 It’s slightly smaller than the super which means that part of the image will be cut off. This card can be slightly more expensive than the Topps Super card, but still not as expensive as the Topps base card from 1970.

As to which one you’ll pick – it’s really up to you. If you prefer a clean and simple design, you can go for the Topps Super one. If you like a more glossy finish, then this last glossy card is for you. But if you want a mainstream card, then the base Topps rookie card will probably be your best bet – you can’t go wrong with it. 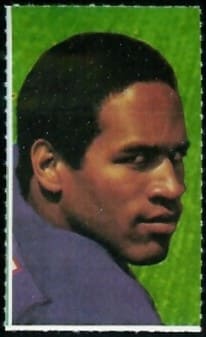 The earliest card of O.J. Simpson is not really a card but a stamp.

Other than the fact that it’s the earliest piece of memorabilia of OJ Simpson, this card is not very noteworthy, but it might increase in popularity with years to come. It’s super hard to find but not very expensive, so you might as well go for it in case the value starts to rise.

And if you’re a big O.J. Simpson fan, then it’s also probably worth looking into buying this card.

If you prefer to collect old rookie cards, then it’s probably better to stick with the Topps base card if you have slightly more to spend or the Kellogg’s card, which is a bit cheaper.

How Much is an OJ Simpson Rookie Card Worth?

The 1970 Topps O.J. Simpson rookie cards can be worth anywhere between several hundred dollars up to several thousand dollars in the highest grades. Finding higher graded cards will be a bit more difficult since there are not that many of them, so if you’re a budget collector, then you might be able to find a decently graded card for relatively low prices.

The 1970 Kellogg’s card is also considered a rookie card, although it’s slightly cheaper than the 1970 Topps card. It will cost several hundred dollars and potentially even less for lower grades, while it might go into thousands for the highest grades.

The bottom line is that any card you get from 1970, you’re going to have to spend a bit more for higher graded cards.

What is the Most Expensive O.J. Simpson Rookie Card?

The 1970 Topps is the most expensive OJ Simpson rookie card, followed by the 1970 Kellogg’s rookie card.

The prices will vary according to availability and the condition of the card, though. You might see a higher graded Kellogg’s card surpass the Topps card in value because it is a higher graded alternative.

Despite his off-the-field shenanigans, O.J. Simpson remains one of the most legendary and well-known football players in history, and his cards will remain in demand for many decades to come. That’s why it’s worth taking a look at the cards, and you might even be able to get yourself a bargain if you’re willing to invest more time into research.