Despite the strong competition in the quarterback spot, Drew Brees is today considered to be one of the best quarterbacks in history.

Having won the Super Bowl title and the MVP award for Super Bowl, his rookie cards have always gathered a lot of attention, particularly at the peak of his powers.

For many collectors, it was his almost 20-year career that granted him the legendary status, which is why some of his rookie cards are some of the most sought-after cards in the card collecting world.

And we’re gonna check all of them out right here, in this article, so stay tuned!

2001 was the draft year for Drew Brees and that’s when most of his rookie cards come from – when he was just a young man plying his trade with the San Diego Chargers.

Let’s start with the most popular cards and move onto more premium ones. 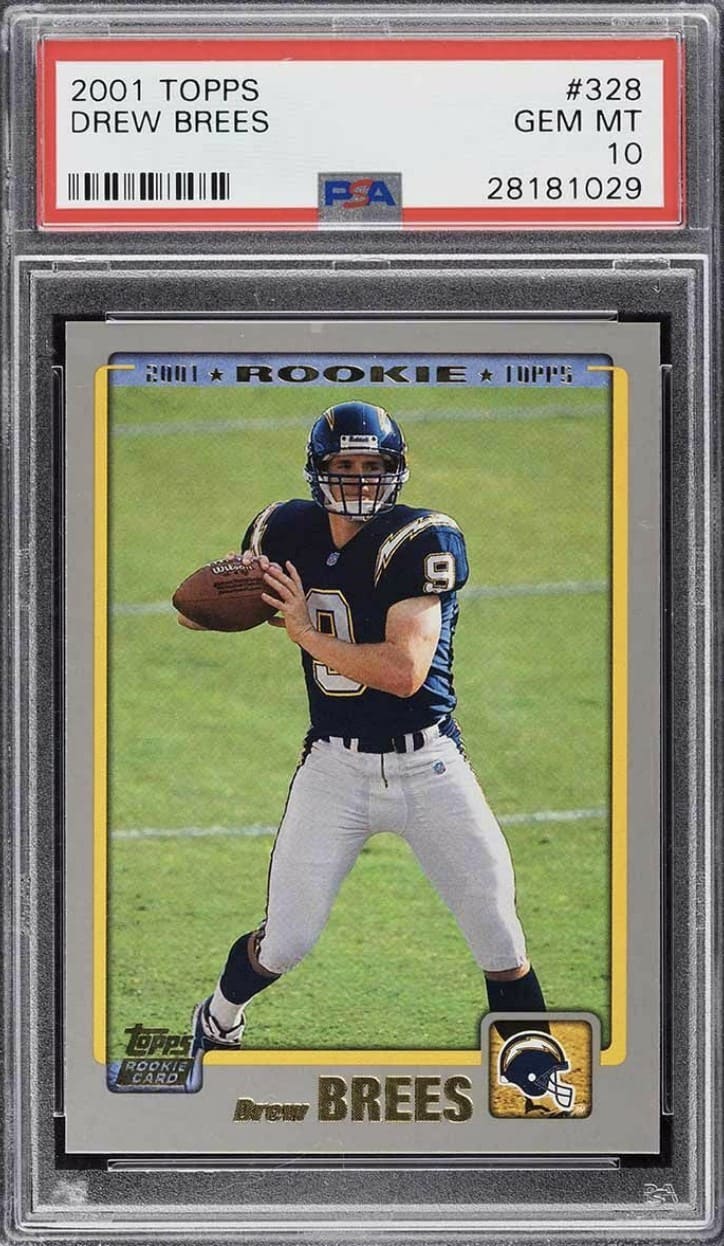 If there’s one card that’s going to be recognized by almost any football card collector, it’s going to be the Topps card. And for Drew Brees, this is one of the most popular and universally loved rookie cards.

While it doesn’t quite reach the popularity of its slightly more expensive cousin (Topps Chrome, which we’ll get to in a bit), it is perhaps one of the most popular non-autograph rookie cards of Drew Brees.

The brand name is what sells this card alone, plus the fact that it’s widely available. This makes it a good proposition for those working on a tight budget, or not willing to spend thousands on one card. 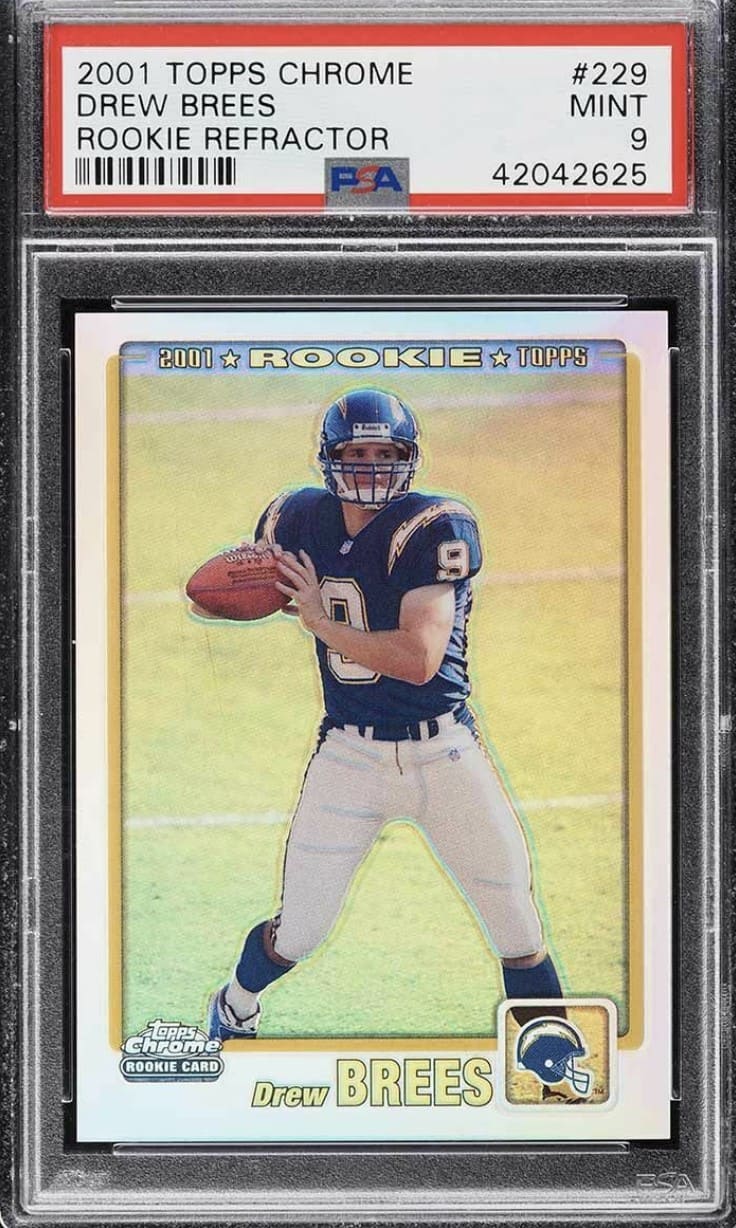 Speaking about popular non-autograph cards, Topps Chrome has to be near the top of the list, if not at the top.

It’s even more popular than the base Topps card, albeit a tad more expensive. And that’s understandable, given the fact that Topps Chrome cards have a reputation for being of better quality than base cards.

This base Refractor card has 999 copies to its name, so it should still be widely available for general customers.

However, if you want something even more thrilling, you can decide to pursue the Black Refractor, which is limited to 100 copies only. It’s even shinier than the base refractor and it has that famous black border, but it’s going to cost a five-figure sum. 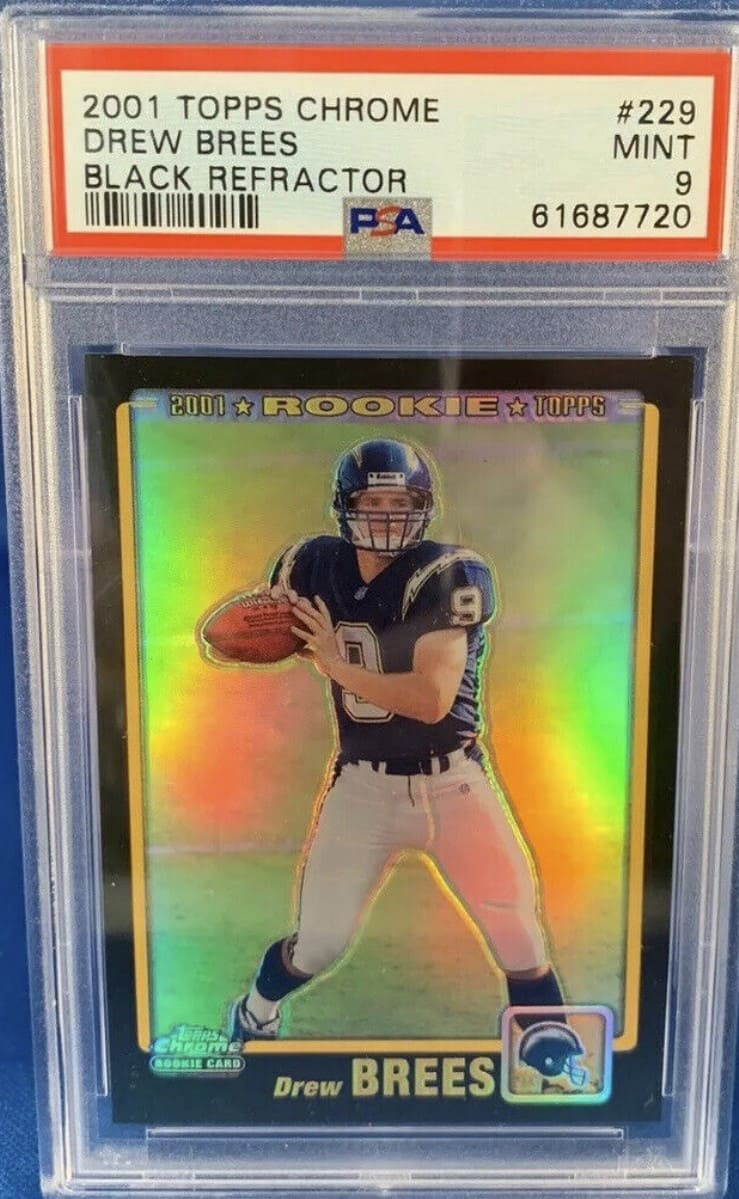 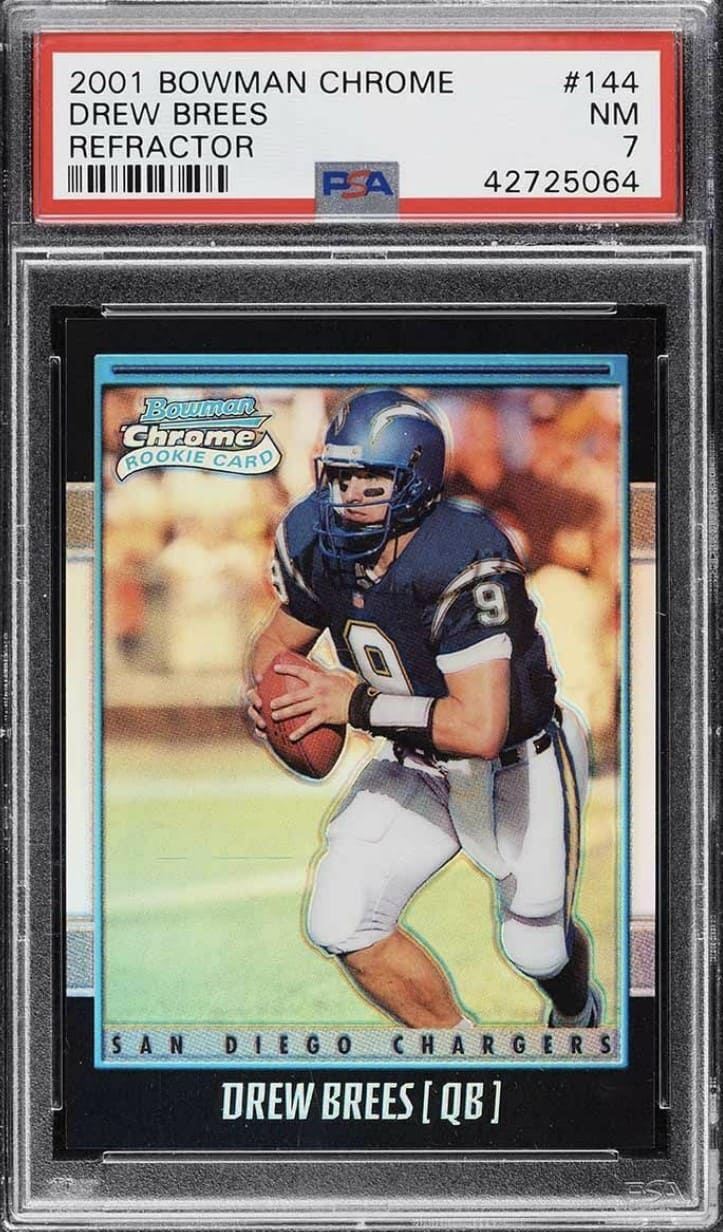 Next on the list is the Bowman Chrome Drew Brees rookie card, which gathers quite a lot of attention mainly because Bowman Chrome is a big name in the world of football cards.

Even though it’s not the most popular chromium card of this player (Topps Chrome is), it’s still a hugely favored card by many collectors. This is why many people are still going after this card, despite the fact that it might be a bit tough to find a well-graded card at this stage.

It has the draw of chromium, which brings a slightly more premium feel to the proceedings.

One of the drawbacks (or positives if you’re on a budget) is the fact that it has a large print run of 2000 copies, which means it’s not going to reach the value of a Topps Chrome card. 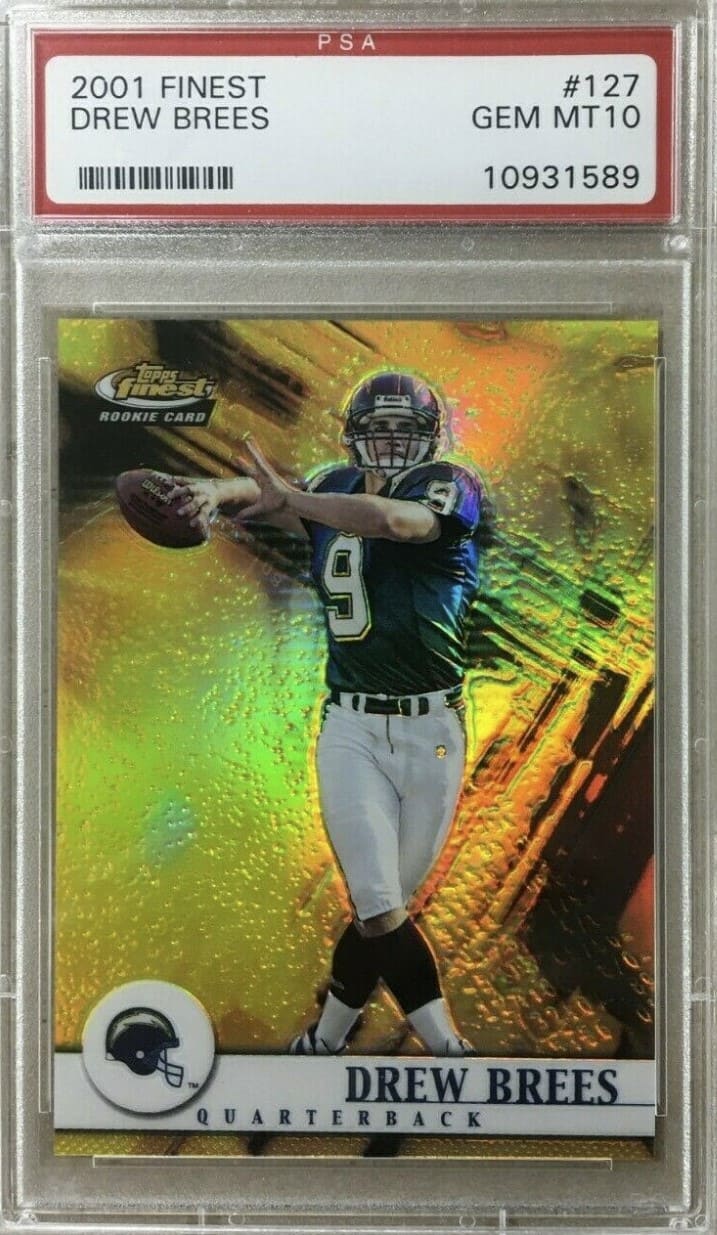 Shiny cards were all the rave in the early 2000s, and this means that the shine of the Topps Finest card of Drew Brees attracted quite a lot of attention.

Nowadays, it still has a lot of interested parties which drives the price up. The print run for this card was 1000 copies, which makes it a relatively easy card to get, but finding the best-graded card like this one in the image might prove to be tricky.

One of the biggest surprises about this card was that it didn’t have any parallels or refractors like the majority of the cards had (and still have).

But then again, the base card is special and shiny enough, so does it really need alternatives (especially when you’ve got so many different options)? The Pacific Drew Brees rookie card is the first autographed card that we’ll include in this list, and it’s one of the most popular overall rookie cards of this player.

One of the downsides about this card is that the image contains a Drew Brees from his college days (although that might be a positive thing for some collectors).

But, you also need to consider this: the card has 1000 copies, and each copy is numbered, so you’re getting proof that there really are 1000 copies, plus you’ll get a sense of ownership if you have a numbered card. E-X is a hugely popular card brand from the 1990s, but also the early 2000s. It has produced many-a-great cards, including many popular basketball cards. But it also created some great football cards, and this one is one of them.

Even though this card might not be as shiny or as in-your-face as some previous E-X cards, especially from the 1990s, it’s still a hugely popular and demanded card.

There’s a moderate level of rarity to this card with 1000 copies produced, but if you’re looking for something rarer and more challenging to find, you can opt for the Essential Credentials parallel. This has only 29 copies. 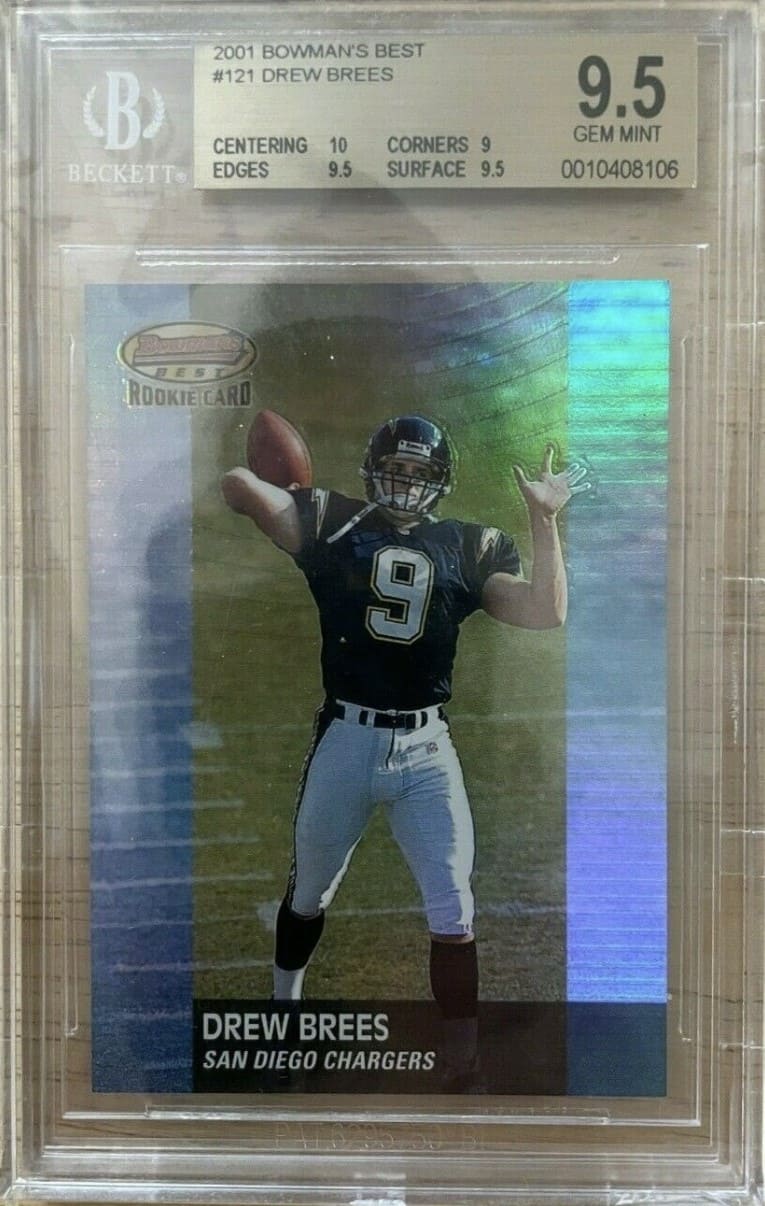 Now, when it comes to the Bowman’s Best cards, you really have two different options: you can go for the #121, which is seen above, or the autographed version, which can be seen in the image below. 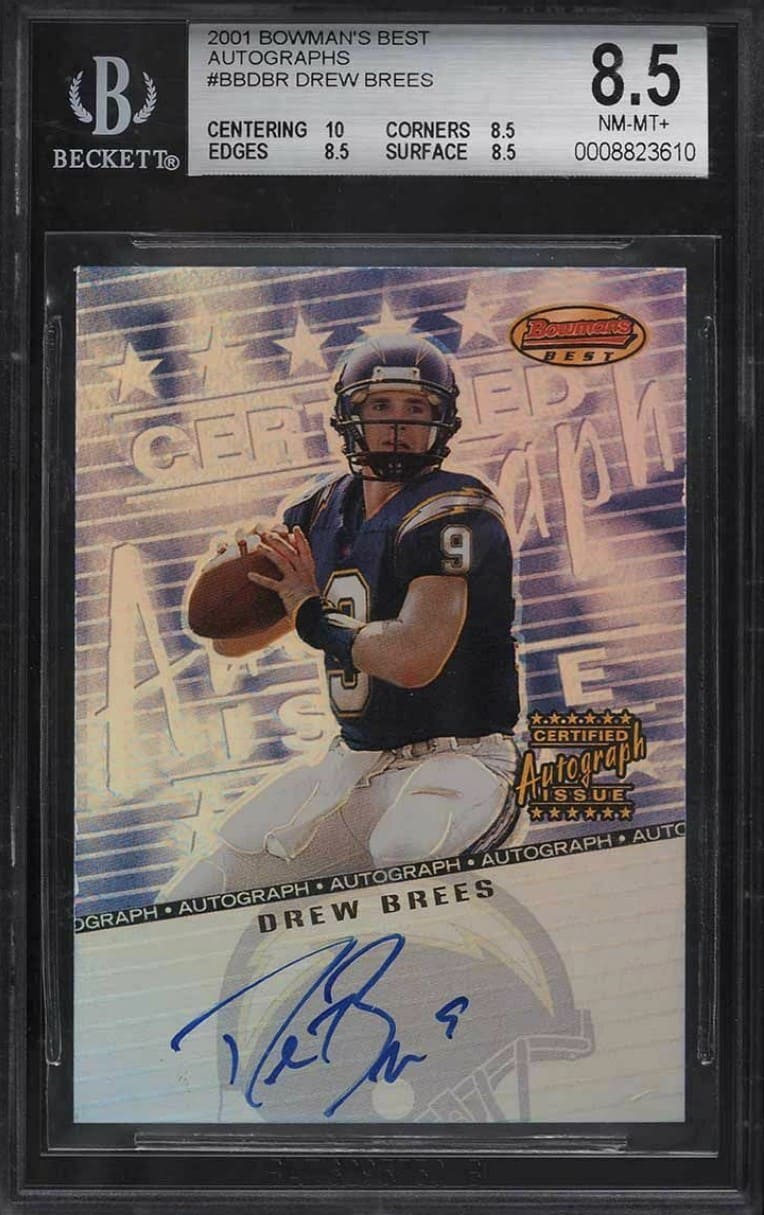 If you want something a bit rare, then the autographed card will be for you. However, the Bowman’s Best base card (#121) is going to be an appealing card for those who are looking for a budget option.

Both are extremely popular though, but it will depend on your preferences as to which card you decide to buy. 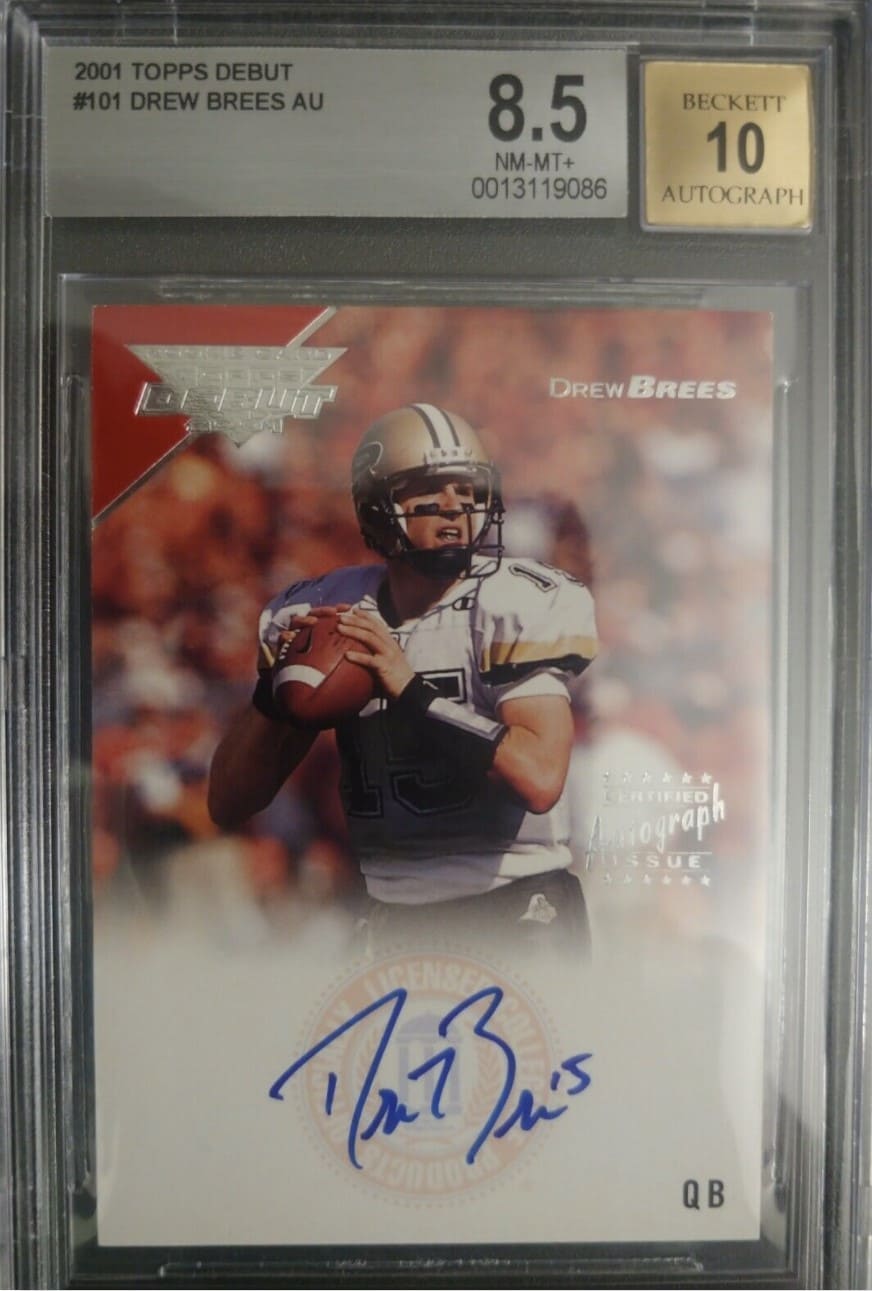 If you like the idea of a Topps card with an autograph, then the Topps Debut card is going to be a decent option for you.

So if you want an autographed card and you don’t want to break the bank, then consider getting this card. 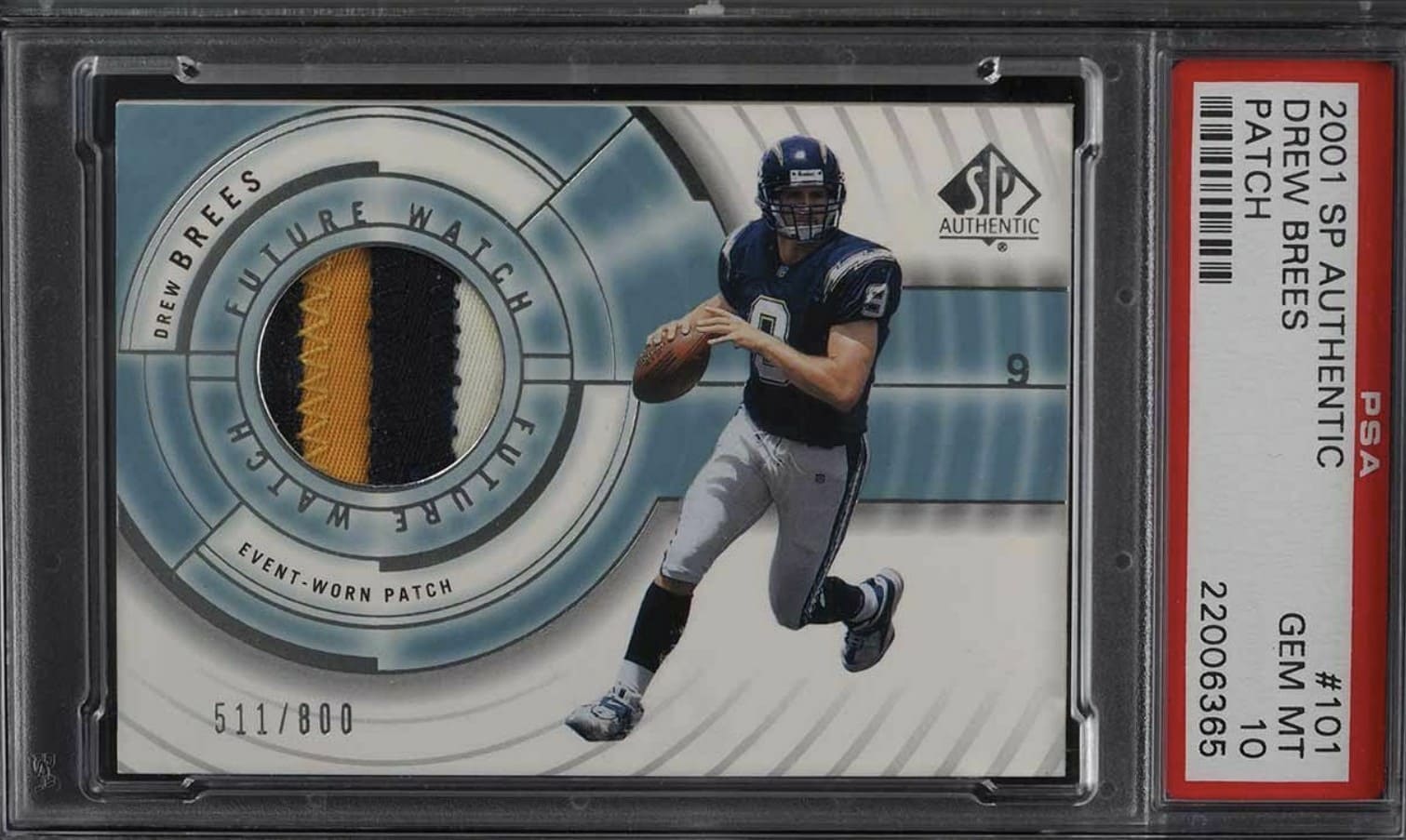 The next card on this list is the SP Authentic card, which is known for its jersey patch. Also, there’s a limited supply for these cards – there are 800 copies of them, which makes it feel a bit more premium.

And with that in mind, you also have to consider that the price of the card is going to go up a bit.

You’re likely going to need to spend a few thousand to get it, although a lot will depend on how well the card is preserved.

Consider getting this card if you like something a bit more premium but still not that expensive as compared to some other not so generously priced cards. 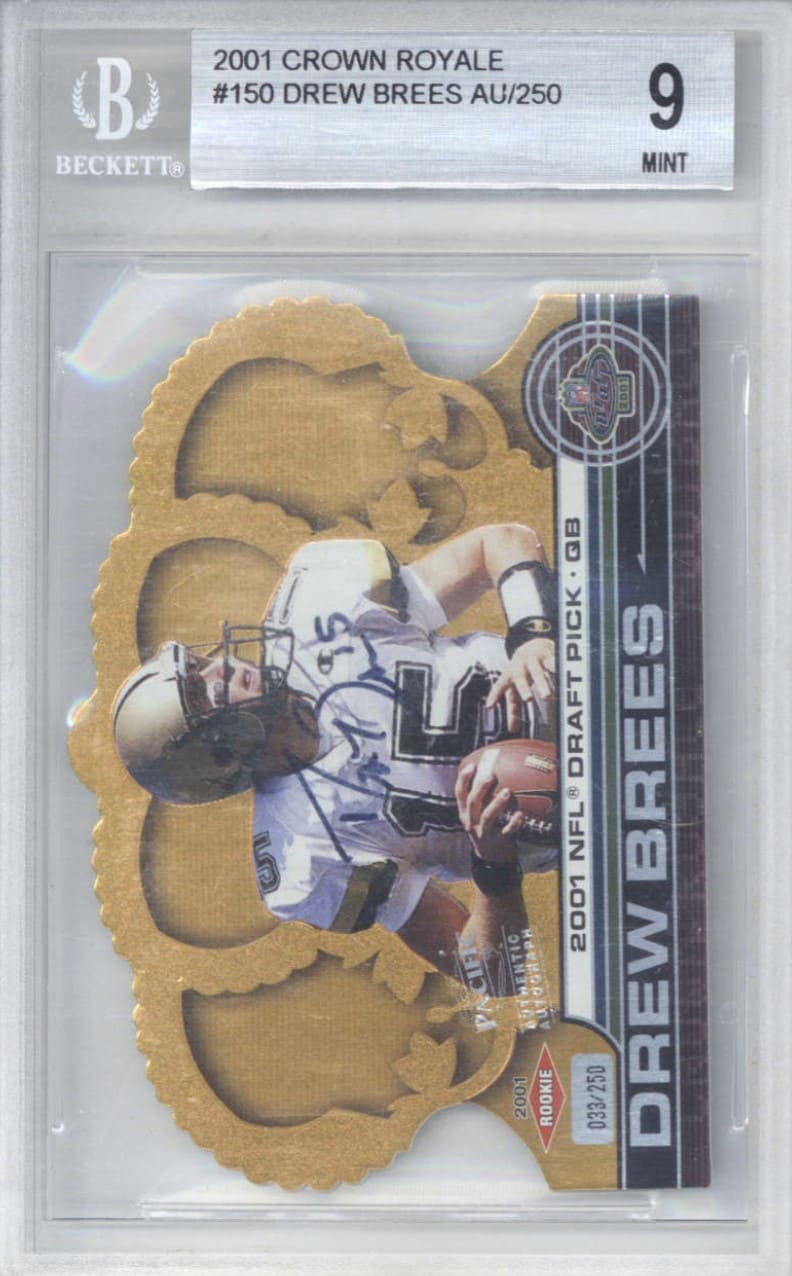 Next up is the famous Crown Royale rookie card with its die-cut design, and the so much desired on-card autograph.

While this might not be the friendliest card for your budget, it is one of the more limited options that you can go for. There are only 250 copies of this card, so finding a sensible price for a good card might be a challenge.

However, it’s also one of the most rewarding cards to own, since it has that typical Crown Royale design that is so loved.

Take a closer look at the edges of the card, particularly if you’re buying an ungraded card. These cards are well-known for their edges being brushed, so you’re going to have to pay close attention to that. 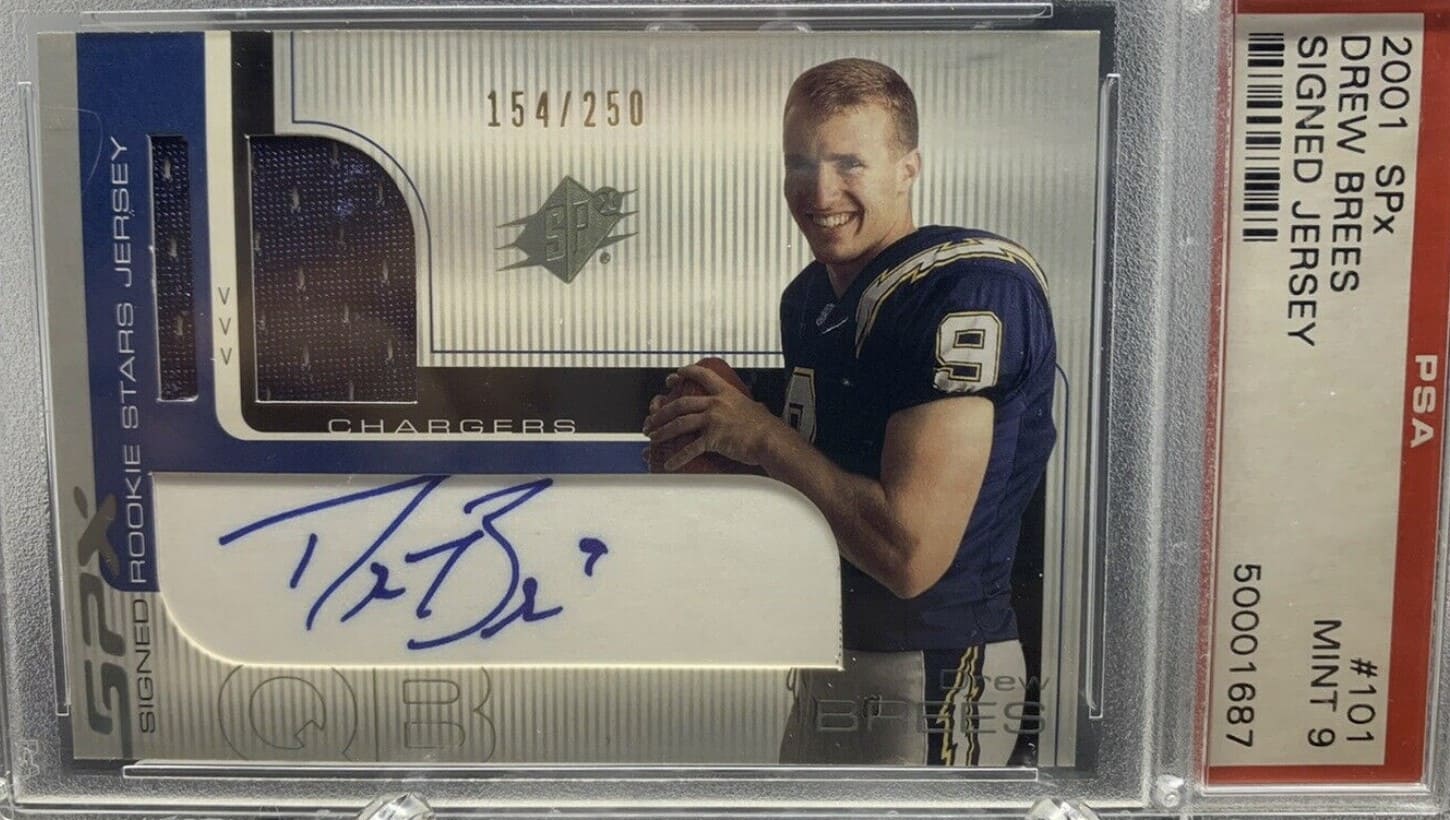 When it comes to SPX cards, you have two main options: the silver and gold variants. It will depend on your personal preference, but the gold card tends to be slightly more popular and as a result, also a bit more expensive.

The standout feature for both of these is going to be the autograph, which you’ll receive as a part of the package. It’s one of the most well-known and loved relic autographs when it comes to Drew Brees cards, so naturally, you’re going to see a lot of interest in these cards.

Pair that with the fact that there are only 250 copies of this card and you’re getting a nice mixture of premium and elegance. 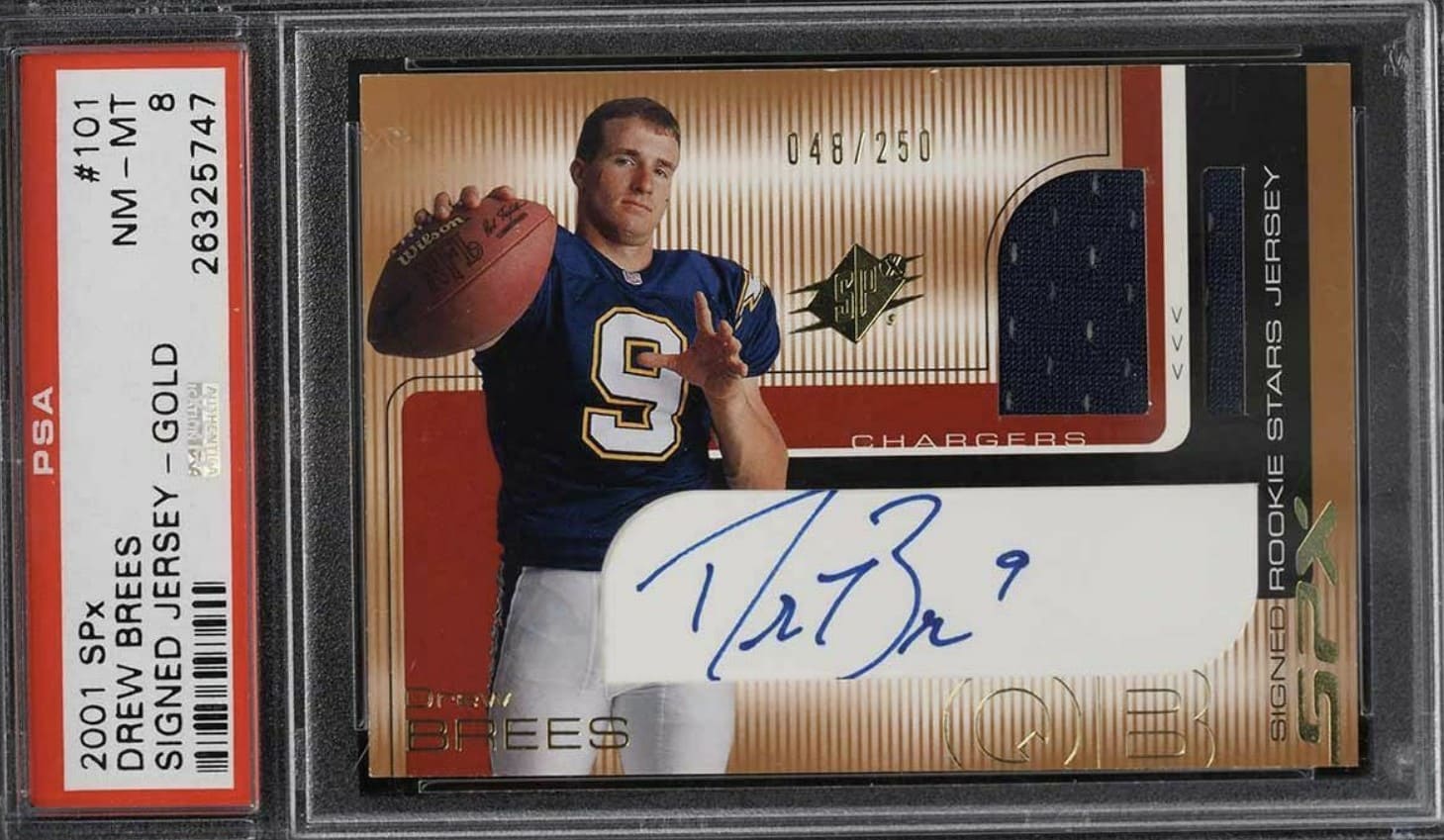 Now, the other variant of the SPX card is going to be the gold card, which is even more popular than the silver variant.

Even though they’re almost the same in terms of layout, there are some key differences between the two.

The most notable difference here is the image on the card as well as how the autograph is presented here. Of course, the biggest difference is also the background, which, as the name suggests here, will be golden.

Nevertheless, the golden variant also has only 250 copies, which means that they’re going to sell well and they can be quite expensive, too. These can cost a few thousand dollars, although it will depend on the condition of the card. Certainly, it’s going to be more expensive than the silver variant. 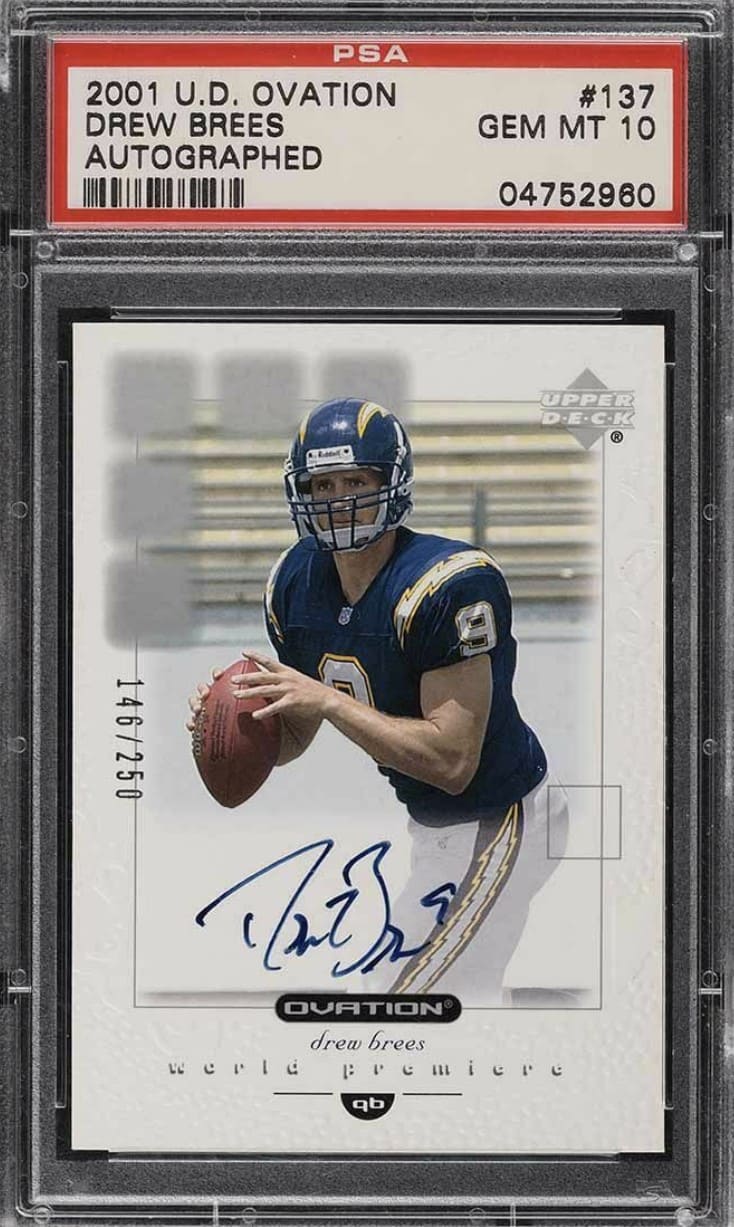 Moving along the list of the more expensive cards, we have the Upper Deck Ovation card #137. This card is still very popular, and it is especially noted for its elegant design that draws a lot of eyeballs to itself.

Another outstanding feature of this card is the on-card autograph that you get, as well as the fact that it’s limited to 250 copies.

Now, we must mention that there are different variants of this card, and each one has 250 copies. The variants of these cards will vary based on the image on the card, although they are all rare finds.

Considering you have four different options with this card, it has become something of a dream for perfectionists. If you are one of those collectors that prefer to fill their collections with all the cards possible, then this option is the right one for you.

Just know that these cards can also cost a premium, and they’re gonna be relatively expensive, especially if you intend to buy all of these. 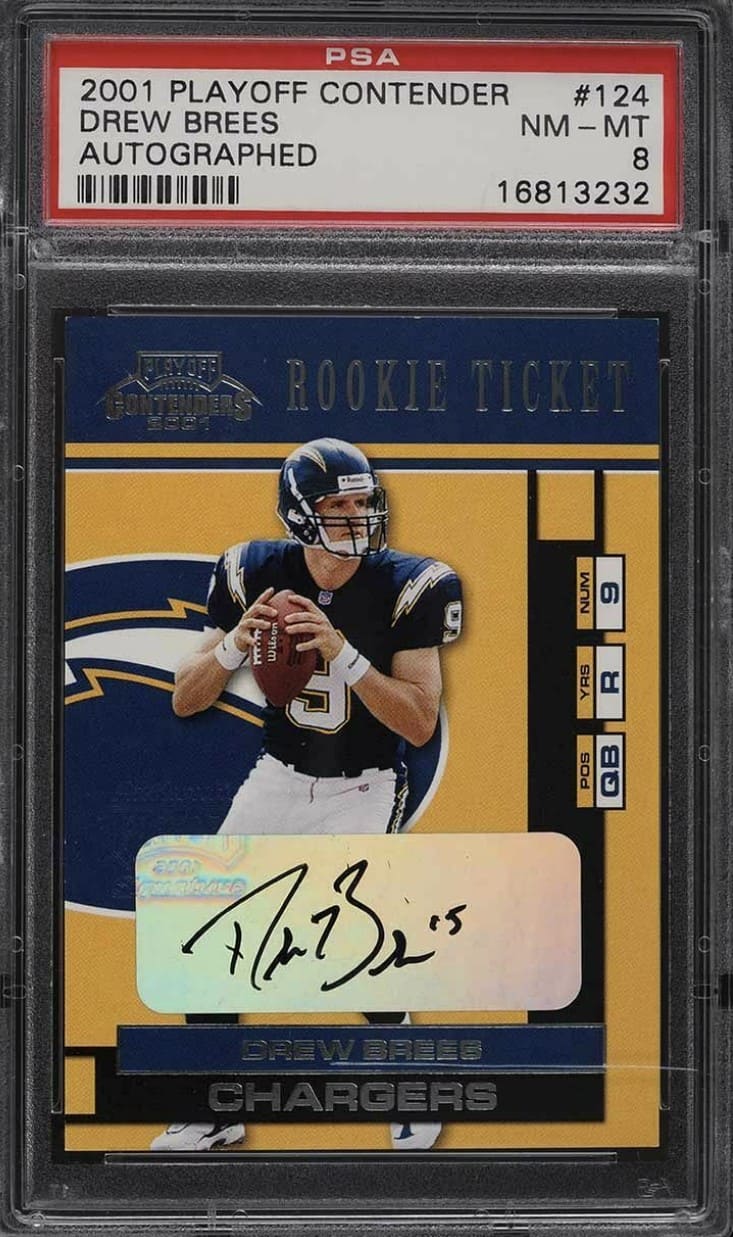 Last but certainly not least, we have the king of them all – the Playoff Contender Drew Brees rookie card.

This is perhaps one of the most popular cards on this list, but it’s also the most expensive card, thanks to the brand name Playoff Contender. You’ll see that it has that typical ticket-like design and of course, the autograph that goes onto the card.

Even though this card comes from an early period of this brand’s history, it’s still achieved a lot of popularity throughout its existence.

It is limited to 500 copies which is not the rarest possible card, but certainly not as common as some other cards we’ve seen on this list so far.

This card is a beauty, although the sticker with the autograph might not be the most attractive option for all collectors. Still, it remains to be seen as a hugely popular card that is always going to be valuable.