There were five sets of Batman cards back in 1966 – black bat, red bat, blue bat, Batman bat laffs, and Riddler Back. Let’s take a look at some of the best cards that came out in 1966 from either of these sets. 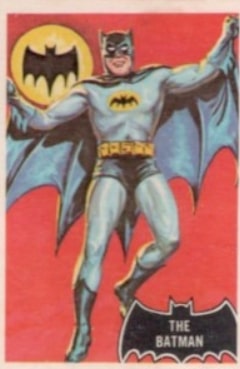 The number one card from the standard, black bat set, is one of the most well-known cards out of all the sets of Batman trading cards. It’s perhaps the one card that most collectors think about when they talk about 1966 Batman cards.

In a decent condition, a graded card of this type can collect a handsome chunk of money. The main problem that collectors have with the black bat set is that they can’t find a good #1 card – which is why they’re prepared to pay good money for it in good condition. 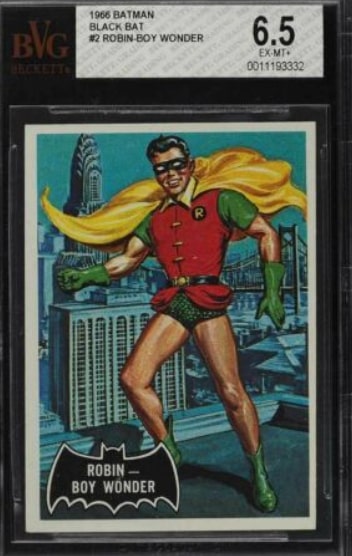 The first few cards in the black bat set were simply descriptions of the characters in the comic – and Robin is arguably one of the more popular ones. On card #2, you’ll find a nice depiction of Robin and a description of the character on the back of the card.

What stands out with this card is the details on the card, and the art style used by Norman Saunders. It’s a lot more detailed than most cards in the set, especially when compared to #1, for instance. 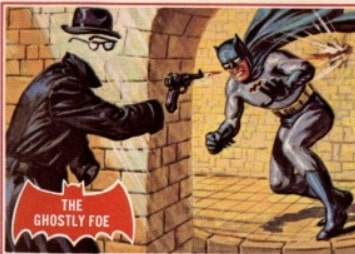 If you manage to find a good deal for the #1 card in the Red Bat set, you should not hesitate to get it. They’re quite a rare find nowadays, which means that many of them are not in the best of conditions.

It’s perhaps the most well-known card from the Red Bat set, as Batman fights “The Ghostly Foe”, which is a mysterious enemy that Batman fights throughout the entire set. It’s an action-packed set and the #1 card just goes to show that. 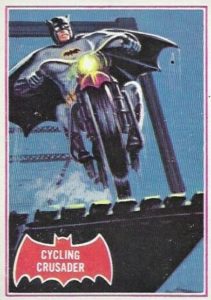 One of the coolest cards that can be found in all of the sets, the #10 has always captivated the hearts of Batman lovers. It’s full of action, as Batman (spoiler alert 🙂 ) tries to escape from the castle where he had been held captive by a criminal syndicate on this high-speed bike. He has to make a big jump across a bridge in order to complete the escape.

You’ll find many ungraded cards where there might be several issues – the most prominent one is the centering, so be careful of those cards. Also, make sure they’re original and not knock-offs. 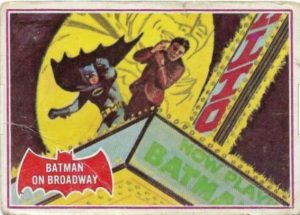 #44 card represents a dramatic end to the Red Bat set, where Batman is fighting the killer from the story, which has led them to fight on top of Broadway. It’s one of the more iconic and well-remembered cards from the set featuring Broadway, which makes it especially popular.

On this card, you’ll find the typical design from the Red Bat series with the red border and the red bat on the bottom of the card. You’ll probably struggle to find this card graded and in decent condition, though.

Batman Blue Bat #19B – Cornered on a Cliff 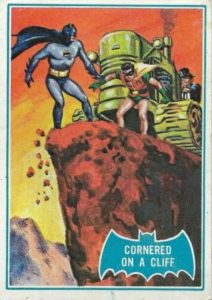 Batman and Robin find themselves cornered on the edge of a cliff, which forces them to jump from the cliff into the river below. This seems to be the only solution to escape the menace of being chased away by the Penguin, who has set up this deliberate trap for the pair.

It’s a cliffhanger of a card, just making you want to get the next card in the set in order to see what happens next. It’s a brilliant card that produced quite a lot of anticipation in the story. 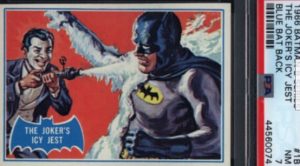 This is one of the more well-known depictions of the Joker in the whole Batman series, which varies differently from other depictions in the later movies. Here, you can see the Joker jesting with Batman, attacking him with some sort of ice gun.

The troubled expression on Batman’s face makes it an unforgettable scene, perhaps even a bit comedic. It’s the #1 card in the Blue Bat set, and once again, it ends with a cliffhanger: “Could Robin arrive in time with the Sonic Defroster?” 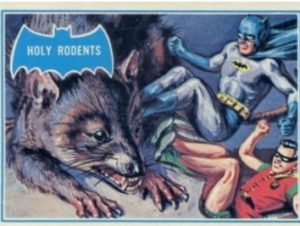 On card #35B, Batman and Robin have to deal with giant, radioactive rats and rodents that rose from the polluted river in Gotham City in order to save the city. It’s one of the more iconic cards from the set, even though it doesn’t have a significant story background.

Still, the card can collect a good amount of dollars if in the right condition. The problem will be finding it in such a condition. 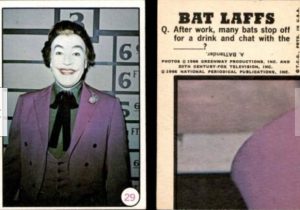 Here’s the image of 1966’s Joker which was played by Cesar Romero, and it featured heavily in the 1966 Batman movie. An interesting feature that Bat Laffs cards deployed is the question, or the quiz, on the back of the card, which was meant to entertain the owners of these cards.

Bat Laffs was well-known for depicting and featuring characters from the 1966 movie, and the Joker is perhaps one of the more iconic characters. You can also collect other characters, such as Robin or Batman, for instance. 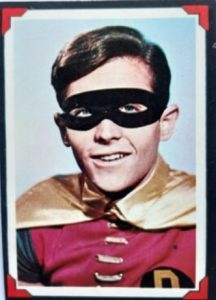 If you’re wondering about the Batman Riddler cards, this is how they looked like. On this particular card, you’ll find Robin, the Boy Wonder. These cards were perhaps a bit more famous for what they had on the back of their cards.

They featured the Riddler and the riddles that were made by this character. It’s interesting to see these riddles and solve them, too, especially if you’re a massive fan of the entire Batman lore.

The 1966 Batman trading cards are perhaps the most famous trading cards of this franchise, but there were some subsequent trading sets that should also be mentioned. 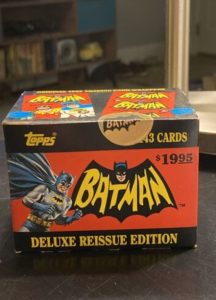 In 1989, Topps released two factory sets of Batman cards, each containing 143 cards in total. The cards were issued in two series, while also adding a set of 22 stickers for each series.

They were mostly reprinted cards from 1966, although there were some changes to the print. The cards were printed on a shinier stock and in higher detail. There were also some additional cards that were not found in the original packs. 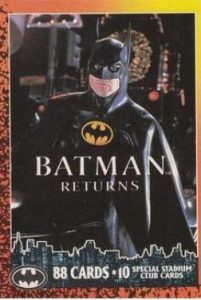 Batman Returns card set came out in 1992, just like the movie of the same name. It was a scaled-down variant of these cards, as there were only 88 cards included, as well as 10 special stadium club cards.

They mostly featured imagery from the movie that came out in 1992, so it wasn’t an illustrated set like the 1966 cards. These cards tend to be a bit darker than most other Batman sets – you’ll love them if you liked the 1992 Batman Returns movie. 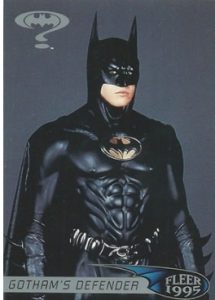 Next was the 1995 Fleer set that was a bit more suited towards modern card collectors. It was different from the 1966 traditional cards in that they featured imagery from the Batman Forever movie that came out in 1995.

The base version only features the characters from the movie and some scenes, but there are some different variants of this set – for example, the Metal variation is a bit more illustrated and has a different look than the base set. 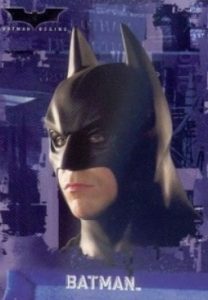 Batman Begins came out in 2005, and it was directed by Christopher Nolan. It was the beginning of the famous trilogy of Batman movies, which achieved great success in the movie industry.

This card set has some randomly inserted autographs, which makes them a bit more appealing for collectors. You might even have some luck to find autographs from some famous actors, like Liam Neeson or Gary Oldman.

1966 was the year when the Batman comics first came out, and they were an instant success. Batman cards came out the same year, and they were issues originally by Topps, but some other companies also produced them, such as O-Pee-Che (for Canada), A&BC (for the UK), and Scanlens (for Australia).

Topps were produced for the US market, and they’re the most widely recognizable today, so we’ll focus mostly on them.

Originally, the 1966 Batman cards came out in the 55-card Black Bat set, which was illustrated by Norman Saunders. However, there were four subsequent sets, so there were 5 sets of Batman trading cards in total in 1966:

All of them are unique in their own way, although the first three only had some minor differences. Let’s take a look at what they were.

The Black Bat set was the first card set that came out for Batman trading cards in 1966. It’s considered to be the standard trading pack, and it’s a bit more widely available nowadays, too.

The main feature of these cards was the black bat logo on the bottom of the card. That’s what separated this set from other sets (blue and red). 55 cards were to be found inside this pack, and each card told its own story to complete the storyline.

So even if you owned the Black Bat card series in its entirety, there was still some intrigue to collect the other two sets in order to get new looks. This black set is a must-have for any collector of old-school comic cards.

Next up came the Red Bat series, which was quite similar to the Black Bat series – the main difference was in the red bat logo that can be found on the bottom of the card.

There were 44 cards in the set, and it was produced all over the world by different manufacturers, just like the Black Bat set. They’re a bit tougher to find than the original black set, so they can be a bit more expensive.

The Blue Bat Batman trading cards were arguably the toughest to find and collect. It was a bit different than the other two sets: some cards were collected as puzzles, and the story was printed inside a large blue bat logo on the back of the card.

This card set also features 44 cards. Today, they’re the toughest to find and consequently, a bit more expensive than the other two main sets.

The next set that you should know about is the Batman Bat Laffs set. It is different from the three main sets produced by Norman Saunders – instead, this one featured imagery from the 1966 Batman movie starring Adam West and Burt Ward.

These cards feature movie depictions of the characters such as Joker, Batman, Robin, and others. It’s a great set for Batman movie lovers but also for general collectors that are looking for some iconic cards.

1966 Topps Batman Riddler Back also featured the Batman movie that was an offshoot from the TV show. These cards feature imagery from the scenes from that movie, and they’re mostly printed on a black background.

The name Riddler Back comes from the riddler that can be found on the back of the card. These can still be easily found nowadays, and they are not as expensive as you might think – there were 38 cards originally in the set.