Thinking of starting a coin collection? There are plenty of ways to get started.

Coin collecting dates back to ancient Greece in the 12th century. Most coin collectors prefer rare old coins or commemorative medallions. Collecting coins is a unique hobby that costs money but can end up earning you a fortune. Coin collectors are also known as numismatic or numismatics. People collect coins for different reasons.

As a hobby, it’s made up of a diverse group of people. Some partake in the hobby because classic coins are lovely art pieces; some enjoy the history behind an interesting coin, while others collect coins as an investment.

Regardless of the reason that attracts you to this unique art, we share crucial tips to enable you to get started and become a seasoned coin collector. There are different reasons for starting your own coin collection.

Consider this your coin collecting for beginners guide with some beginner collecting tips.

What is Coin Collecting?

Coin collecting is the art of searching and gathering minted legal tender, bullion coins, and commemorative medallions. Coins that interest collectors the most include those briefly circulated, those with mint errors, and historically significant coins. The grade determines the value of collectible coins. To know the grade of collectible coins, you have to employ the services of commercial organizations that grade, authenticate and attribute coins.

Collecting coins is similar to collecting high-value artwork, comic books, trading cards, and memorabilia. Moreover, collecting coins is a fun and satisfying endeavour because you can own little treasures you can display or admire at any time. Hollywood stars, kings, and emperors have all engaged in this sophisticated hobby.

When starting your coin collection, there are a few things to learn. If you don’t have a significant amount of capital you’re willing to invest in your coin collections, it’s advisable to start small. Starting small allows you to learn the trade before buying collectible coins in wholesale or large quantities. It’s advisable, to begin with, smaller coins before moving to bigger and more expensive ones.

For example, collectible silver and gold coins are available from 1/10 of an ounce, ¼ of an ounce, and ½ ounce. Smaller coins are easy to collect and store.

Before starting, take time to learn the coin’s history, the mint that produces them, how they’re graded, and the price. The most critical factor determining the grade of collectible coins is their purity levels and the alloys they’re made of. Start by collecting the type of coins you like. You can purchase a specific currency or series of coins that appeal to you. Some of the coin attributes that investors find interesting include the history of the coin and its fascinating design.

Research first before you join this exciting hobby. Furthermore, it would be best if you learned the jargon used in the industry, for example, circulation coins, commemorative coins, face value, silver American, pure silver, and intrinsic value.

Should You Collect Coins?

The answer is a resounding “yes.” People collect coins for a variety of reasons. Some collect them for historical value, while others collect coins for investment. Let’s share with you why you should join millions of coin collectors worldwide.

As stated earlier, collectible coins have a historical value. For instance, when you look at the coins you receive as a balance after making a purchase, you can see pictures of Australia’s uniqueness. Some coins bear the image of an aboriginal elder, for example, the $2 coin, while others are inscribed with unique wildlife only found in Australia. These coins enable you to possess a part of Australia’s history in the form of art. For me (an Aussie) it’s a local coin – but so many others find it interesting.

Collecting coins from other countries with mints like the U.S., the UK, Austria, Canada, and South Africa also allows you to learn the history of these countries. It’s the reason collectors are attracted to old coins because they transport them centuries back in time.

Collecting coins can be lucrative if you target rare ones that are sought or coins that appreciate, for example, bullion coins. If you plan to collect coins for investment purposes, you should always check the price of the coin you’re buying.

A coin collection can also be passed down as an inheritance. Stories of people who sold expensive coins they inherited from parents and grandparents are familiar. Some old and rare coins have fetched up to $2 million in auctions.

What Should Motivate You to Start Collecting Coins?

Collectible coins are beautiful pieces of art that can be displayed and admired. Furthermore, it’s a fun and sophisticated hobby. Coin collectors acquire knowledge of different cultures and histories in their pursuits. Some coins bear the images of founding fathers, monarchs, animals unique to specific geographic locations, famous tribal chiefs, or musical instruments linked to famous orchestras.

Collectible coins also enable you to diversify your portfolio as an investor. For instance, gold coins rarely depreciate even during recessions. 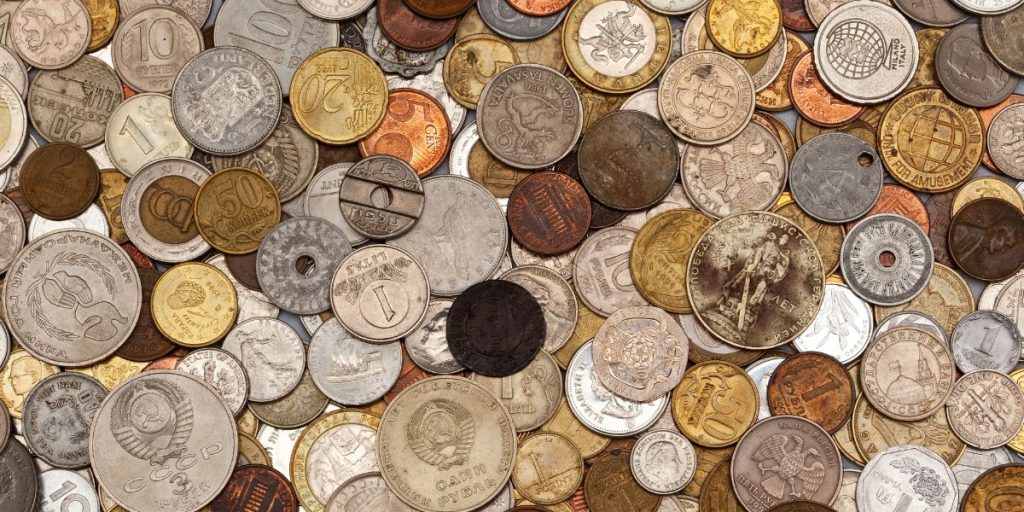 Basics of Coin Collecting: How to Get Started and What to Know

This section shares five crucial tips to help you get started and succeed as a coin collector.

You need to set a goal before you embark on collecting coins. Some of the questions you should answer include the reason you’re collecting coins. The type of coins you’re interested in collecting, and the designs you prefer. Coin attributes, metal composition, and history should also be taken into consideration.

Coins can get damaged. Handling and storing collectible coins should be done with care. The first thing you should do is get a safe folder to display and store your prized possessions. When holding your precious coins, remember to wear latex or cotton gloves. You’ll need to learn how to clean a coin, as looking after your collection is a big part of your coin-collecting journey.

The Basic Parts of a Coin

Obverse: It’s the front side of a coin “heads” that bear the national emblem or the head of a monarch, emperor, or president.

Reverse: It’s the backside of a coin that in most cases bears a specific design.

Relief: refers to the raised image or the three-dimensional figure inscribed on the coin’s surface.

Field: The flat surface on a coin that is engraved with images, effigies, or inscriptions.

Rim: The raised ring that runs around the edges of the coin.

Edge: The outermost part of a coin that is sometimes considered the “third side.” The edge is sometimes plain or serrated.

The Legend: refers to inscriptions of letters engraved on a coin to identify the country of issue and the face value. Sometimes it includes the initials of the designer.

The Different Types of Coins

Below are some of the common coin types you can collect:

Brilliant Uncirculated Coins: These are brand-new coins that have never been in circulation. The attributes of the BU coins include a fine mint appearance and luster.

Error Coins: Coins that have unique flaws that separate them from similar coins. These types of coins are difficult to find and extremely rare and come with a high price tag.

Proof Coins: Meant for collectors and highly regarded for aesthetics and visual appeal. These coins have an intricate design and fine finish.

Commemorative Coins: These coins are minted to mark a special event or to honor a special person.

Bullion Coins: High-value coins made from precious metals such as gold, silver, and platinum.

Ancient Coins: Historic coins dating back to the Greek or Roman empires. These coins are mostly handmade.

Coins and Coin Sets to Collect For Beginners

This collection features 40 coins minted from 1900 to 1999. These coins bear images of every major event that took place in the U.S. in this century. You can purchase these coins individually from a dealer. The most affordable in the collection is the “Peace Dollar” minted from 1921 to 1935. Other coins featured in this collection include the 1932 Washington Quarter, the 1964 Kennedy Half Dollar, and the 1979 Susan B. Anthony Dollar. 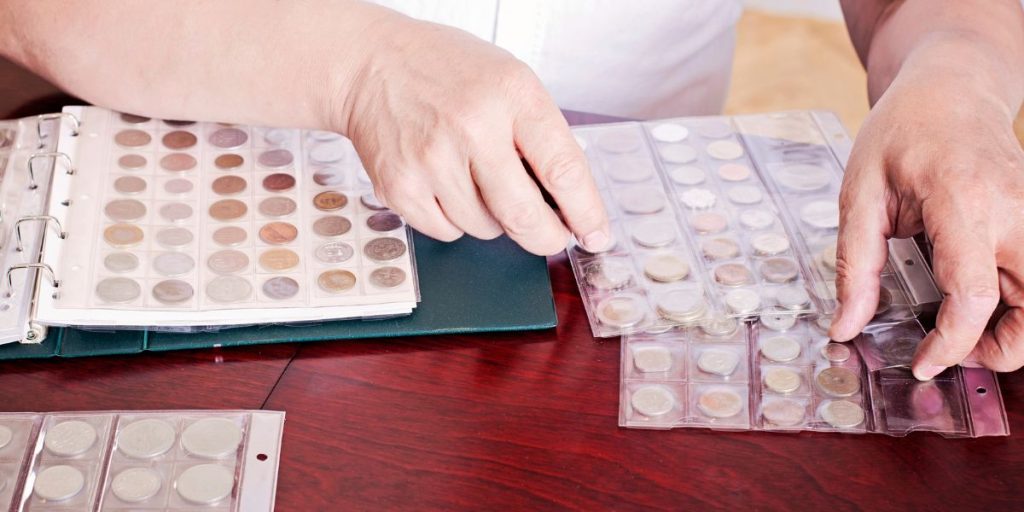 Investing in Coins and Paper Money – Can Your Endeavor as a Coin Collector lead to Interest and Profit? Start Simple and Small!

If you’re a novice collector, the one thing you should not do is collect coins for money. It will not work for you. Instead, focus on building your collection by starting with simple and smaller coins before moving to complex and more expensive ones. Remember, if you want to make profits in the future, the longer you hold on to your collection, the greater your reward will be.

Starting your coin collection should be the goal here; that’s the rewarding hobby – not making significant purchases and hoping you make it big.

All Alternative Assets are Risky

How to Determine a Coin’s Value

You need to look at three main factors when determining the value of coins. They include rarity, demand, and condition/grade. Rarity means considering the number of coins produced and how many are still in circulation. Demand refers to the frequency collectors seek the coin. It varies based on the popularity of the coin. Most collectible coins are graded as mint or uncirculated condition, meaning no signs of wear and tear.

Bullion coins are also graded in terms of purity levels. For example, gold and silver coins are graded based on the level of alloys and base metals found in them.

Find the Most Watched Coins on eBay

What coins should a beginner collect?

As a beginner, you should collect the type of coins you’re interested in. However, it’s advisable to start with small affordable coins as you learn the ropes. Refer to the guide above to learn about some suitable coins for beginners.

Is coin collecting a good hobby?

Yes, collecting coins is a sophisticated and enjoyable hobby. It’s one of the oldest hobbies dating back to the Greek and Roman Empires. Kings, emperors, and Hollywood stars partake in this hobby.

Collecting coins can be profitable if you do it as an investor. You buy coins that appreciate; hold onto them, and sell them in the future for a profit.

How do I start an organized coin collection?

To organize your coin collection, you need to research and identify the type of coins you want to collect. Second, you need to get capsules, folders, or tubes to store and protect your prized collection from damage.

What coins are worth collecting?

There are different types of coins worth collecting. They include ancient coins, error coins, bullion coins, and commemorative coins among others.

What does every coin collector need?

Every coin collector needs to learn about the trade before building a collection. Failure to do so may lead to losses. A guide to coin collecting like this helps get the wheels in motion, but you’ll learn most of the hard lessons over time.

Can you make money from collecting coins?

Yes, you can profit from collecting coins, especially for rare, valuable coins. Some of these coins have fetched up to 2 million dollars in auctions. However, like any collectable, coins are a volatile investment. There are plenty of other safer ways to earn make money. You don’t have to be a coin dealer. However, if you’re interested in coins, then there’s a way to way to make collecting a profitable journey.

What kind of people collect coins?

What Types of Coins are good for New Collectors?

Coins that are good for new collectors are sought-after currency coins minted several years back. These coins are rare and are not circulated with other coins.

It’s a bit more than finding pocket change or someone finding an interesting coin in their pocket, isn’t it?! I hope this article helped if you’re thinking of becoming a coin collector. Start with building a collection today.