If you watched NBA games in the 1980’s, you saw Alex English sink baskets.  The man was a scoring machine for the Denver Nuggets throughout the decade!  As a matter of fact, Alex English scored more points (21,018) than any other NBA player during the 1980’s and he joined the ranks of Wilt Chamberlain, who dominated the 1960’s, and Kareem Abdul-Jabbar who owned the 1970’s in that same category.

Alex English trading cards are available and collectors can grab these cards from numerous places.  Let’s take a look at some Alex English Rookie Cards and some of his Best Cards. 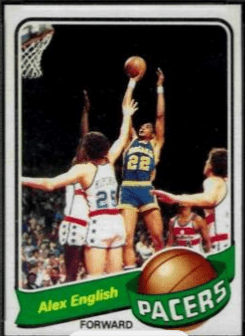 Although Alex English was drafted by and played the first two seasons of his NBA career for the Milwaukee Bucks, this 1979-80 Topps card is widely considered his rookie card.  The Bucks drafted English in 1976, but he became a free agent prior to the 1978-79 season and he signed with the Indiana Pacers.  Alex English showed flashes of brilliance during his brief playing time with the Indiana Pacers.

This card shows the incredible vertical leap that English displayed throughout his career.  He is wearing the number 22, the same number that was retired by his high school in his honor.  Most of the card is the image with Alex English written in the green ribbon across the bottom of the card.  The 1979-80 Topps Basketball Card set contains some important cards but it is very affordable.  The Alex English Rookie Card is one of the most notable cards in the set. 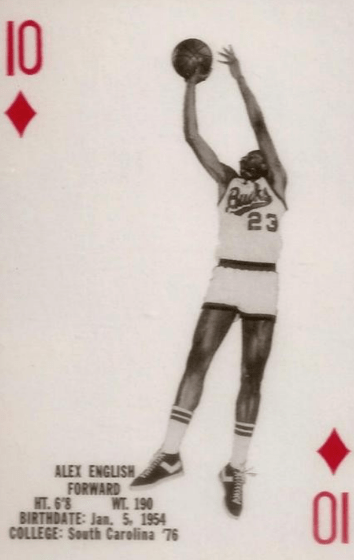 Here we have a rather unique set of cards issued during the 1976-77 season.  Alex English’s image appears on the 10 of Diamonds in a 52 playing card set.  The 10 of Hearts, the 5 of Spades, and the 5 of Clubs also contain the Alex English image.  One can imagine a group of college friends drinking Milwaukee’s Best and playing poker with this set of cards released by the White Hen Pantry convenience store chain.  Some collectors do consider these playing cards to actually be Alex English rookie cards.  Perhaps so, but could you imagine just buying an Alex English card and not the full 52-card deck? 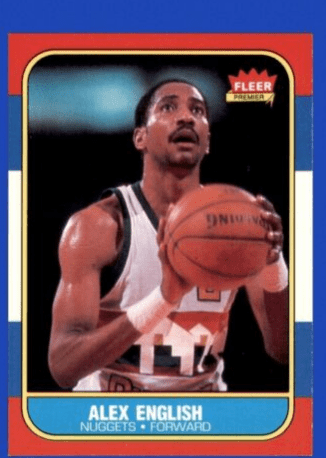 From the world-famous 1986-87 Fleer Basketball set, comes arguably the most popular Alex English card.  This set from Fleer contains some of the biggest named rookie cards from the NBA.  Fleer was returning to the hobby and they nailed a half-court shot at the buzzer with their 1986-87 offering!

This card features a red, white, and blue border surrounding an image of Alex concentrating on measuring a free throw..  Alex English is written in a blue bubble below the image.  English is also shown in his Denver Nuggets uniform.  By this point, Alex English was known and feared by his opponents in the NBA.  This is a fine card and despite its popularity, it is rather affordable.  Collector’s can usually obtain this card from this iconic set for a decent price. 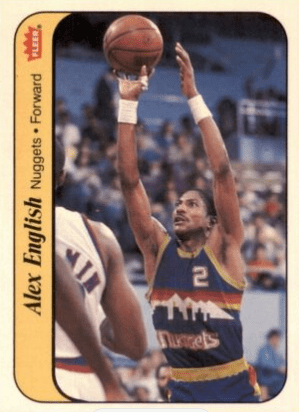 Also included in the iconic Fleer 1986-87 set were these sticker inserts.  This is a strong image of Alex English.  English was already firmly established as one of the best players in the Western Conference and opponents knew what was coming when they played the Nuggets.  Alex English was traded from the Indiana Pacers to the Denver Nuggets midway through the 1979-80 season and showed Denver that they made the right choice in the trade.  Shortly after his arrival in Denver, Alex English just scored points, every game, and he led Denver to the playoffs in 9 straight seasons.  Just prior to this card being released, Alex English and the Denver Nuggets finished their deepest run in the playoffs in the 1980’s.  During the 1985 playoffs, Denver beat the San Antonio Spurs in the first round, the Utah Jazz in the second round, and went on to meet the Los Angeles Lakers in the Western Conference Finals.  The Denver Nuggets came close to beating the powerful Lakers in the series but unfortunately English broke his hand in Game 4.  Denver came close but didn’t quite make it. 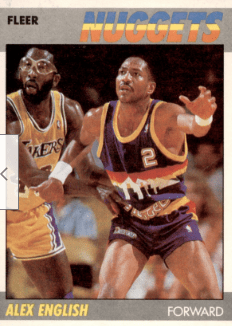 Following their famous 1986-87 set, Fleer offered this set the next year.  These are very attractive cards.  There are gray bars above and below the image.  The team name, Nuggets, appears across the top of the card in blue, gold, and orange.  The image shows Alex preparing to receive a pass from a teammate.  This image clearly captures his #2.  This would be the number that the Denver Nuggets would retire in 1992 honoring Alex English and his playing time with their organization. 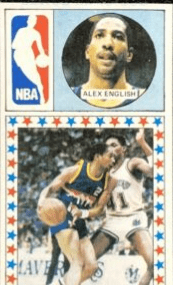 And now we come to some unique cards.  This card is the 1986 Converse Merchante Alex English.  This company only released and distributed cards in Spain so of course this may be difficult to find.  These cards have a sticker back and many were placed in albums when they were first released.  Therefore, it may be even more difficult to find a high quality version of this card.  Even though they are very rare, collectors can still find good deals on these cards and can obtain them for relatively little money.  This entire card series captured some good action shots.  The Alex English card is no exception.  This sticker card is definitely worth it to collectors of Alex English memorabilia. 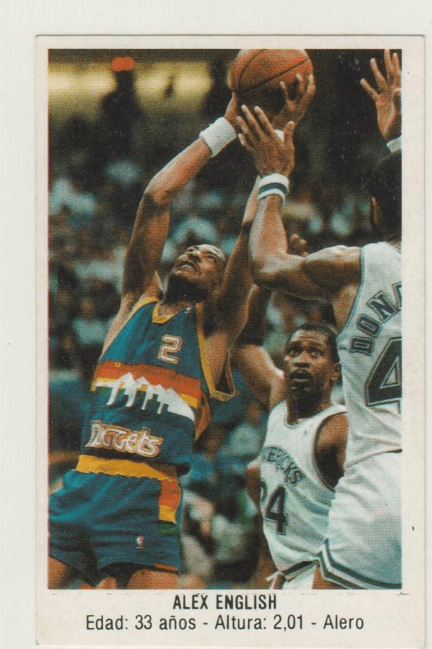 This was the next set of Converse Merchante cards.  There may be some disagreement as to when this set was released.  Some collectors claim it was 1987 and others claim 1988.  If you are searching to purchase cards from this set, it appears you may have more luck searching websites using the year 1988.  Therefore, that is what I am going with.  Like the previous set, these Merchante cards were only released in Spain so they may be difficult to find.  There are some available, though, and they are relatively inexpensive.  I love the image on this card!  Alex English’s jersey and number are clearly visible, but it is so cool that the photographer captured a perfect moment as English is about to launch a fadeaway jumper.  A fine card and a wonderful addition to a collection. 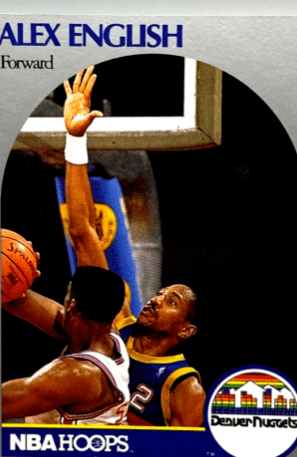 The final Alex English card that I am including in this article is a card from the end of his career.  Alex English finished the 1989-90 season with the Denver Nuggets and as a free agent, signed with the Dallas Mavericks.  Alex English finished his NBA career playing for the Dallas Mavericks for the 1990-91 season.  It is interesting that this card was produced before English signed with Dallas.  The card itself is the easily recognizable silver border of the NBA Hoops set of 1990-91.  The image shows the incredible vertical leap Alex still had even at this late stage in his career.  This is a fancy card and it is available and affordable.  NBA Hoops sets always look very professional.  This is an excellent card to round out a collection of Alex English cards.

Alex English basketball cards are all obtainable and collectors can often find good bargains for his cards.  I reviewed eight different cards in this article and they would all be valuable additions for a collector of Alex English cards.

Alex English brought his brilliance to many different NBA clubs during his playing career and his coaching career.  He concluded his playing career with a brief stint in Italy before officially retiring.  He took some time off from basketball but then returned to coach starting in the National Basketball Developmental League.  He then coached for almost a decade in the NBA with the Atlanta Hawks, Philadelphia 76ers, Toronto Raptors, and the Sacramento Kings.  So his playing style touched 8 different NBA teams during his career!

Alex English cards should only become more popular as time goes by.  Not only was English inducted into the Naismith Memorial Basketball Hall of Fame in 1997, when he finished his career he held many Denver Nuggets team records.  To this day, he is still the all-time Denver Nuggets leader in games played, minutes played, points, points per game, offensive rebounds, assists, and several others.  English also led the Nuggets to 9 straight playoff appearances.  These are all impressive numbers.  But most impressive is that Alex English led all NBA players in points scored during the decade of the 1980’s.  That fact puts him in league with some of the all-time best NBA players in history.  So will Alex English cards increase in popularity?  I think the answer is:  Absolutely… Yes!