He is a retired American football quarterback who played for the American football league’s Dallas Cowboys during their three consecutive championship seasons of 1992 to 1994 and then again after the leagues merged in the first season of 1996.

Today, you might know him as a sports broadcaster for Fox Sports, where he works mainly for football, but also other sports like soccer, basketball, and baseball.

Because of his popularity and widespread image, Troy Aikman rookie cards are still sought-after in the sports card collecting world.

If you’re looking for a good Troy Aikman rookie card, these are some cards that you might want to consider.

Take a look at these cards if they suit you and select the ones that you like best and fit your budget.

If you’re looking for something more, we’ll also take a brief look at some of the cards that came out later on. 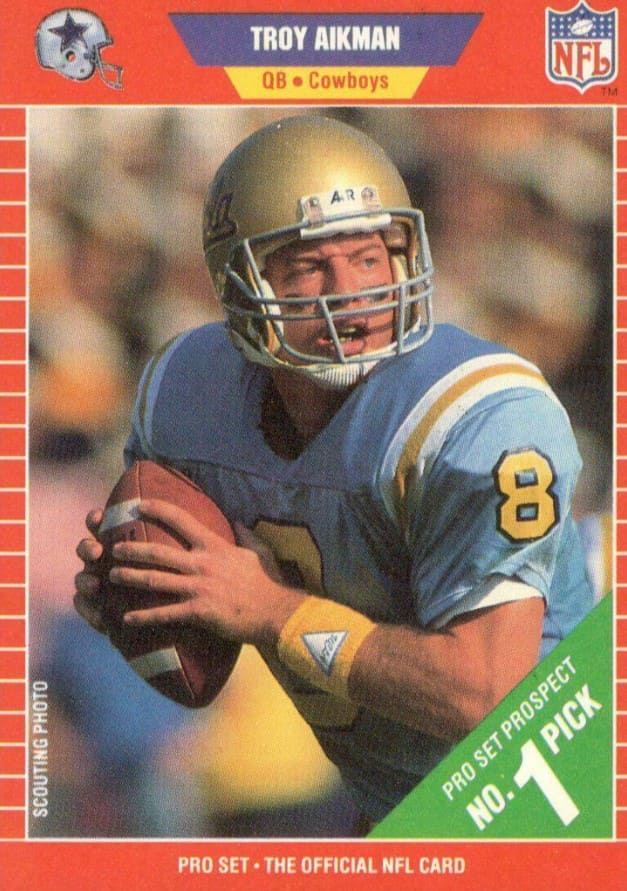 And it didn’t take him long to get the ground running, too. In his first season, he threw for 379 yards, which was a record for a rookie at that time. His performances thus made his cards even more desirable.

The Pro Set card is one of the best picks for football collectors, not just because it is easily available, but it also isn’t very expensive. Even the cards with the highest grades will only be worth not more than a hundred dollars, so it’s a good, budget option to go for.

The reason why this card can be gotten so cheap is the high print run on these card sets. Because there were so many cards to be had, the values started going down and still haven’t really gone up ever since.

Overall, the Pro Set Troy Aikman card is one of the three official Troy Aikman rookie cards. So if you’re deciding which one to get, the Pro Set one tends to be the cheapest and it’s also quite easy to get. 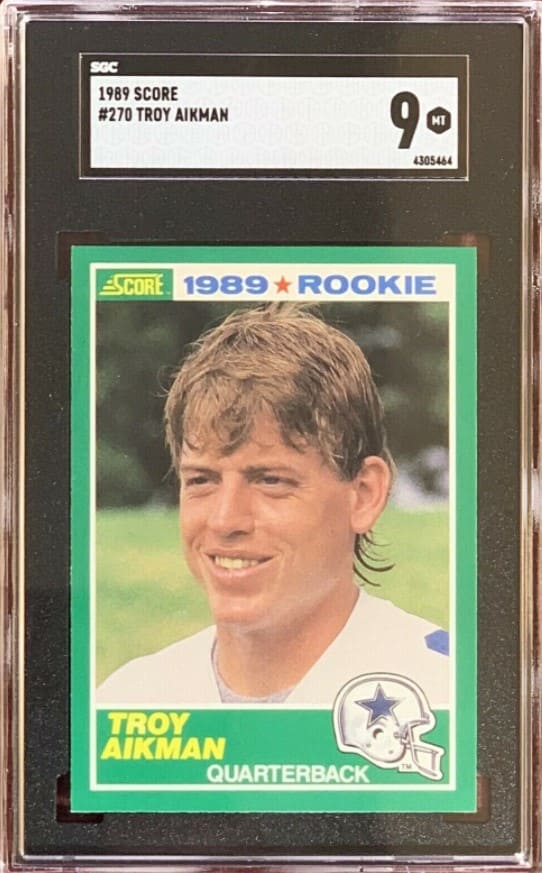 The second Troy Aikman that many rookie card collectors want to have is the 1989 Score rookie card.

Score has always been one of the best brands for football rookie cards, especially in the 1980s and the 1990s. Even today, you will find cards from this brand. So if you like this brand, then this card could be a great pick for you.

Additionally, this Troy Aikman rookie card should also not be that expensive. While it might exceed the values of the Pro Set cards, these Score cards are still very much under the influence of the Junk Wax Era, where card companies printed cards in masses.

Plus, there’s a different vibe to this card than the rest of the Troy Aikman rookie cards.

First, the image is not so serious, as you’ll find a young Troy Aikman laughing on the card. It’s also much more simple in terms of design than the rest of the cards, so you’ll have a unique card on your hands if you decide to get it.

Considering that Aikman was such a huge star even in his rookie season, the prices for this card are quite low, but then again, it is to be expected since the already mentioned Junk Wax Era and the higher print runs for cards.

Overall, Score is the most popular option out of the three rookie cards and the one to get if you’re looking for the most valuable option as well. 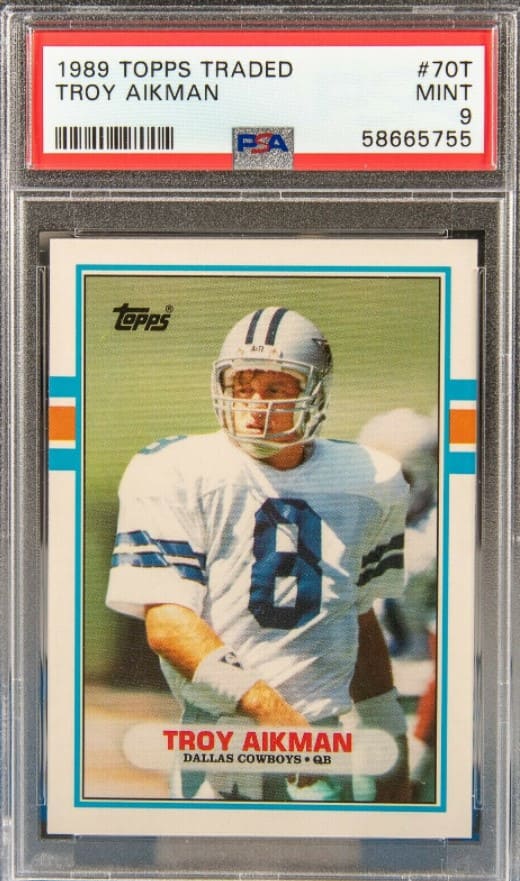 The last out of the three official rookie cards from 1989 for Troy Aikman is the Topps Traded card. This one is perhaps the blandest in terms of design, but it’s still a very popular card, as you’ll find many of these still listed on marketplaces nowadays.

Topps Traded has a good reputation for football cards, though. Topps Traded cards were originally meant to supplement Topps cards, as they were created as high-quality alternatives to base cards.

Kind of like parallels for base cards, only that they were more expensive and of higher quality.

Later on, Topps Traded changed a bit and these cards started to be seen as update cards, or simply additional sets that complemented the base Topps sets.

The 1989 entry for Troy Aikman is one of the most popular football cards from the late 1980s.

It’s not more expensive or valuable than the other two cards and it also doesn’t have any special features, but it’s certainly an interesting card to keep in mind and to own if you’re looking to expand your collection.

If you’re still unsure which card to get, here’s something a little extra that will help you get a better idea of which card is better for you.

To be honest, there is not a lot of differences between these three cards.

The Score card tends to be the most popular and also the most valuable, but the differences in prices between these three cards are quite minimal.

On the other hand, the Pro Set card is perhaps a bit less popular than the other two, but it also tends to be a bit cheaper – again, not by much.

So if you’re a Troy Aikman fan or just a football fan who loved 1980s football, then the good thing here is that you might be able to get all three of these cards, even if you’re on a budget.

If you have to choose one of these, it might come down to a few things:

Notice that I didn’t include your budget since all of these cards are quite similar in terms of values. All of them are quite affordable and you will not have to pay a fortune to get either of them.

Other Troy Aikman Cards to Collect

Now that we’ve seen all the rookie cards for Troy Aikman, let’s also take a look at some of the later cards that might be of interest to you. 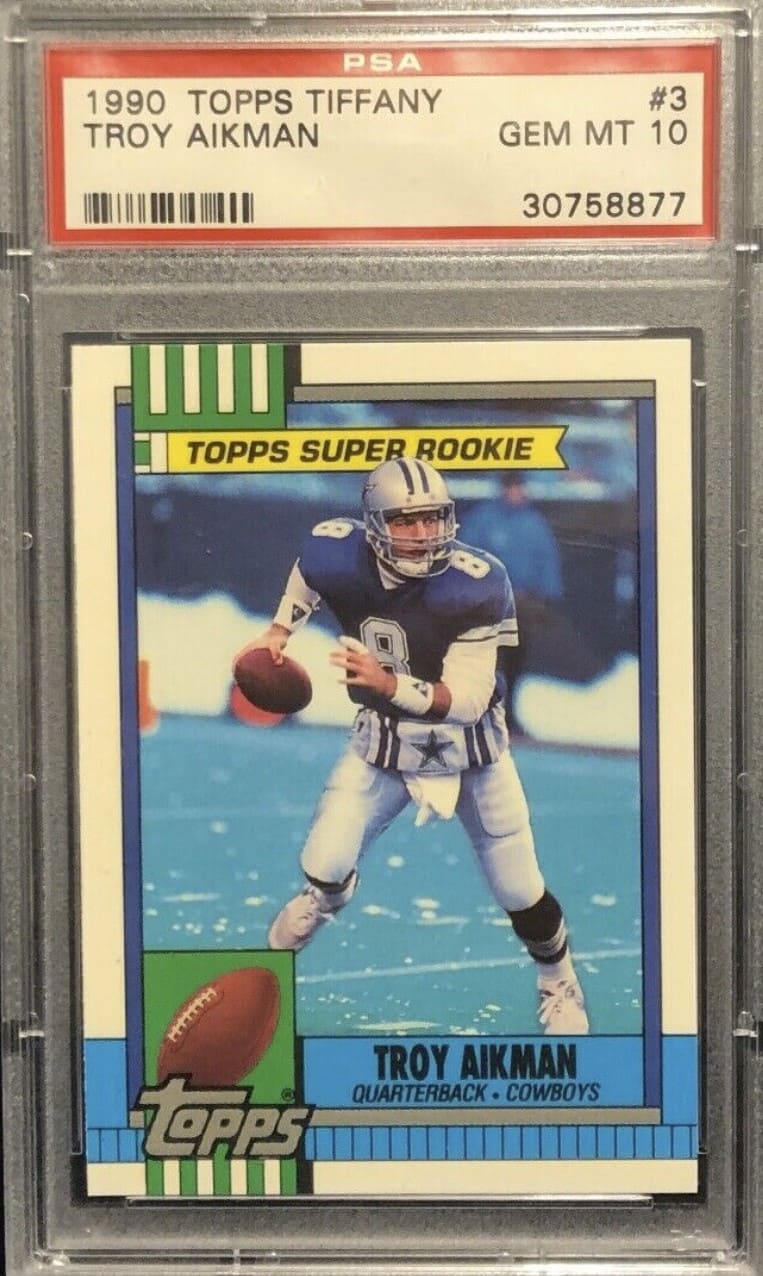 The 1990 Topps Tiffany Troy Aikman card is one of the most expensive cards from that period. That’s because this card is made by Topps Tiffany, which was back then seen as a premium card brand that produced higher quality cards.

The card is branded as the “Topps Super Rookie” card, even though it was only released in 1990, a year later after his rookie season.

It came after a very good first season by Aikman, but the next season was even better for the Cowboys. After a good trading off-season and after drafting Emmitt Smith, the fortunes for the team improved even though Aikman was injured for the vast part of the 1990 season.

In the best conditions, this card can cost thousands of dollars, which makes it more expensive than his rookie cards. Many people see it as a rookie card as well, even though it only came out in 1990. 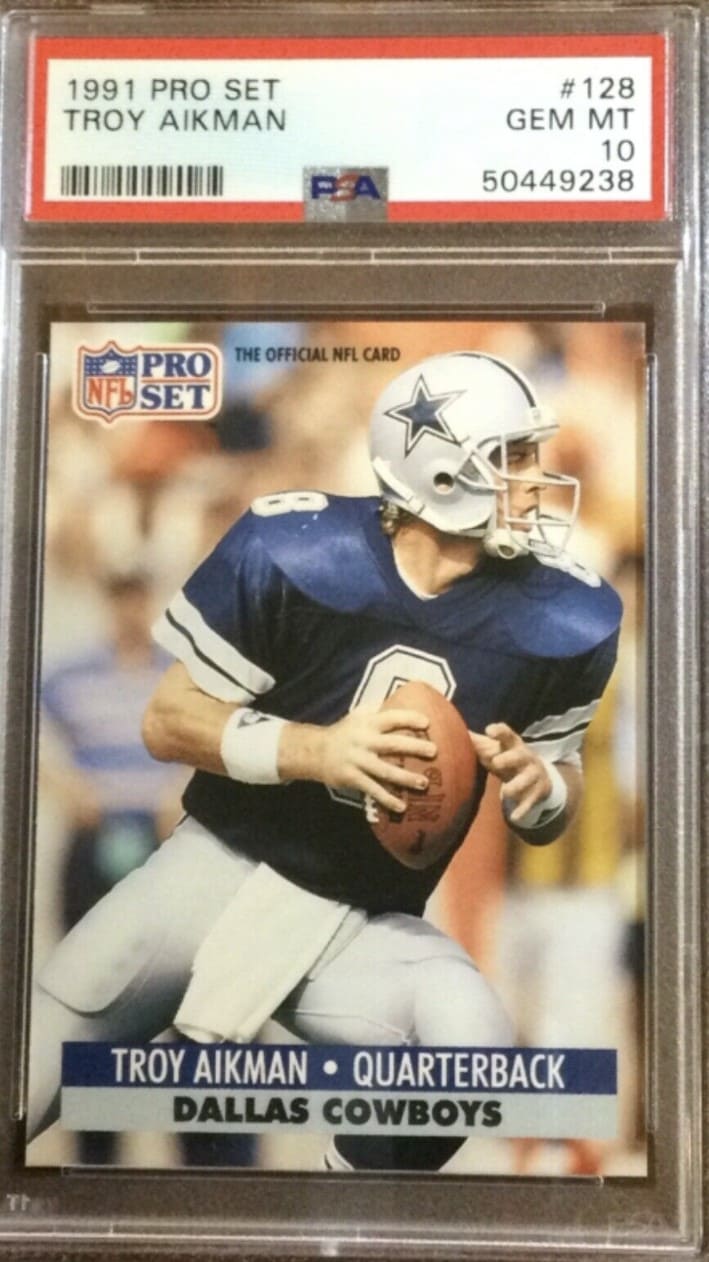 Another non-rookie card that might be of interest to you is the 1991 Pro Set Troy Aikman card.

While it is not the most expensive or valuable Troy Aikman card, it’s still a popular option for many collectors.

It still comes from a very early part of Aikman’s career, which is why many people still decide to go for this card.

That being said, it’s nowhere near as valuable as the 1990 Topps Tiffany card. 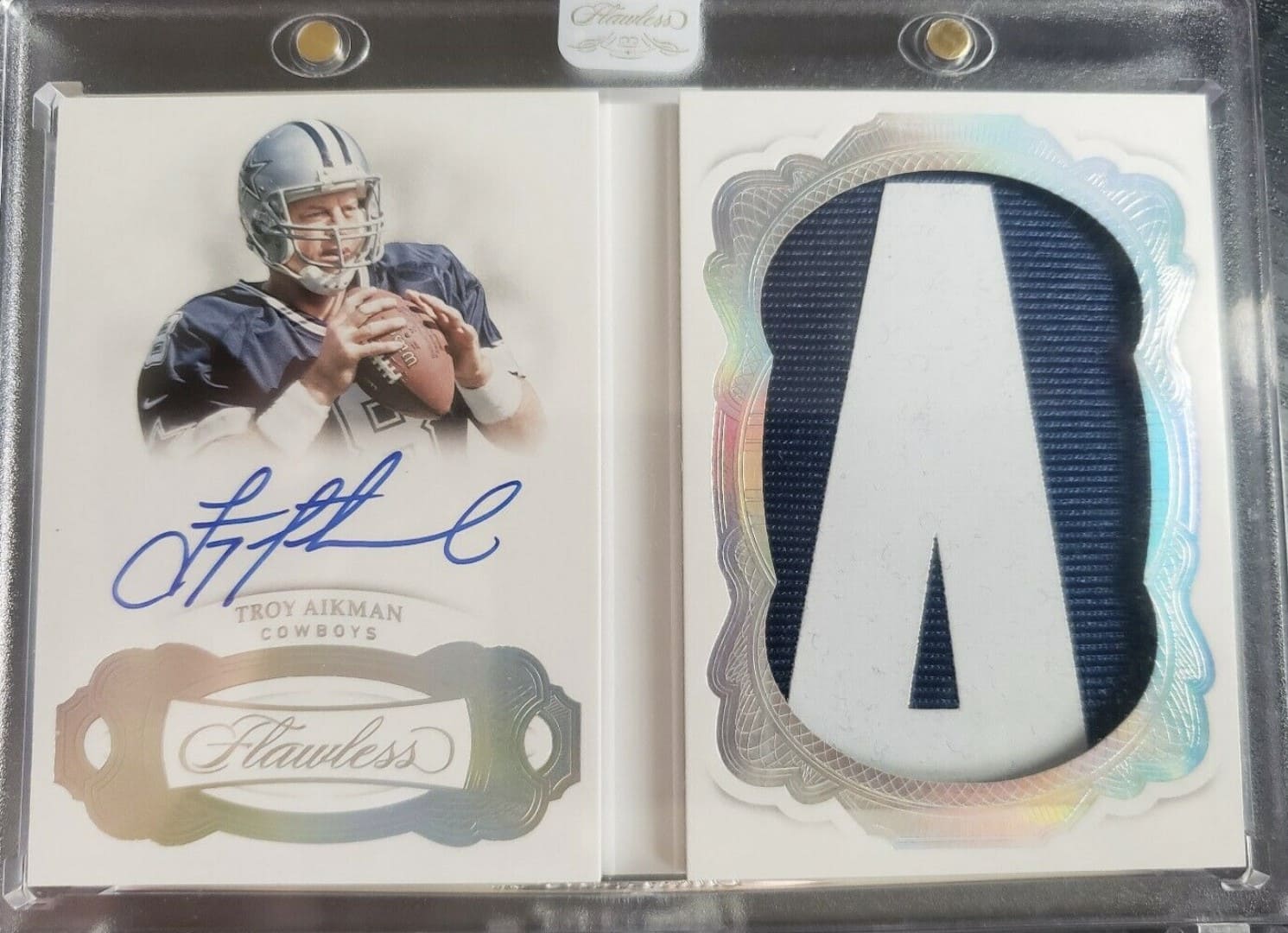 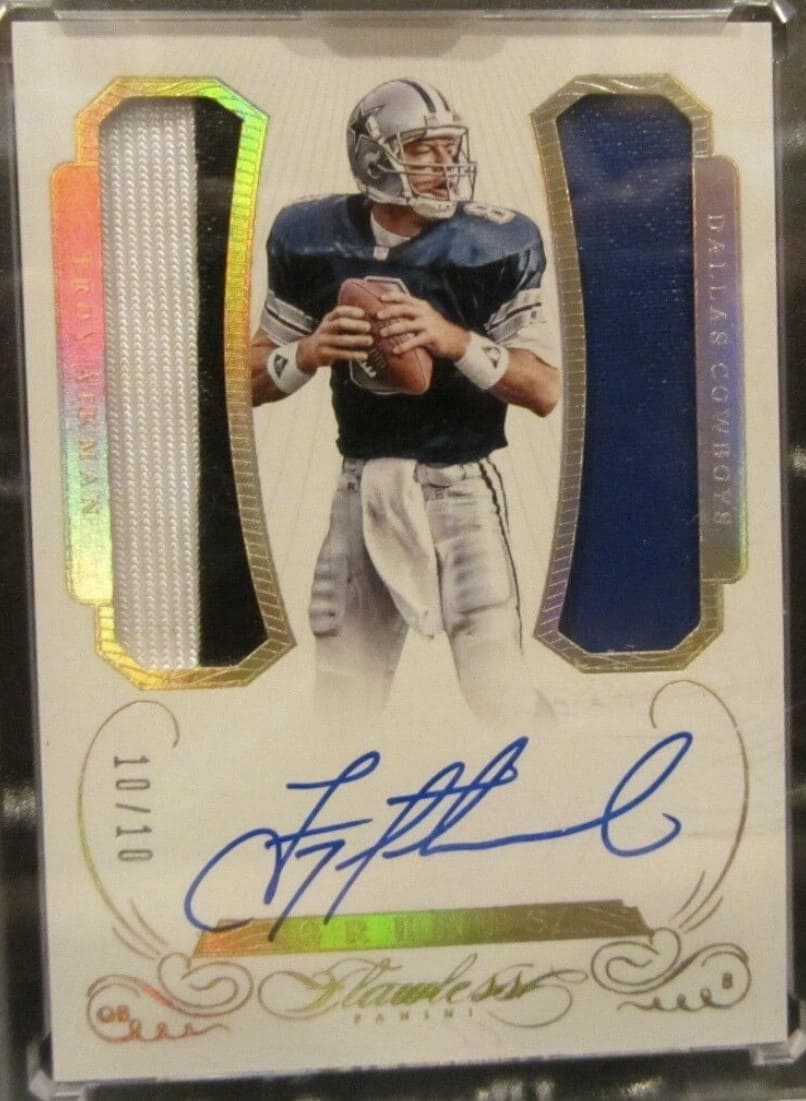 Now, if you’re someone who loves newer cards, then it might be worth taking a look at the newer Panini Flawless cards.

Note that these cards are significantly more expensive than most rookie cards because they are rare and made by Panini Flawless, which is one of the more premium card companies.

But if you like something more modern-looking and you have the money to spend, then these cards will be a good option for you as well.