Ryne Sandberg achieved legendary status as a second baseman during his career.

In this article, we’ll take a look at the best ones, see which one might be your best fit.

Take a look at these cards and choose your favorite Ryne Sandberg rookie card. 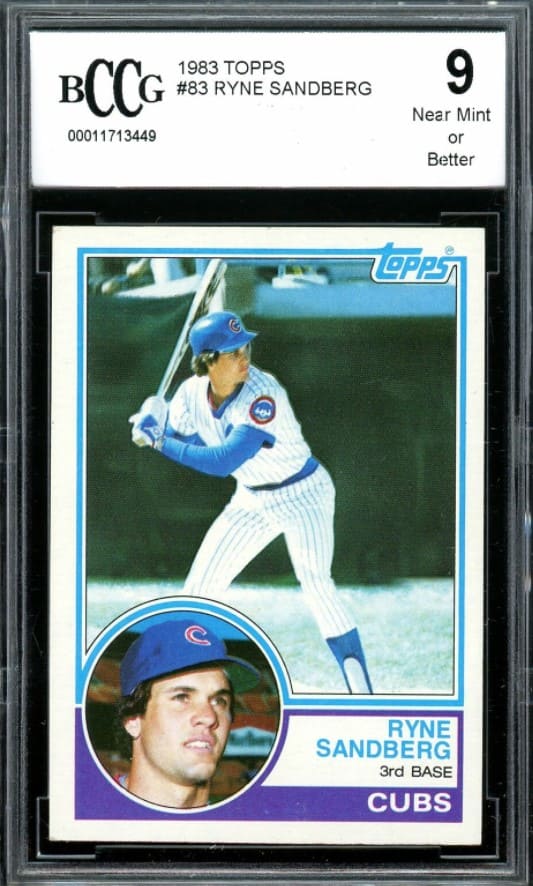 The 1983 Topps Ryne Sandberg card is the most widely accepted as Sandberg’s true rookie card.

It’s one of the first card releases from the major card companies of this player. And if you take a look at his history, you’ll see that this inclusion came in relatively late in Sandberg’s career.

At the time when the card was released, Sandberg was plying his trade with the Cubs. However, Sandberg made his major league debut already back in 1981, although he was not as famous as he was in 1983.

This Topps card will be your best shot if you’re looking for a true rookie card. It’s also one of his most valuable rookie cards, although a lot of the value will depend on the quality of the card.

Luckily, if you’re on a budget, these cards can still be bought at low prices. The card will rarely reach a value of several hundred, so you might find yourself a good bargain at a decent price. But since there are many cards out there of this type, it’s always good to proceed with caution and go for graded cards. 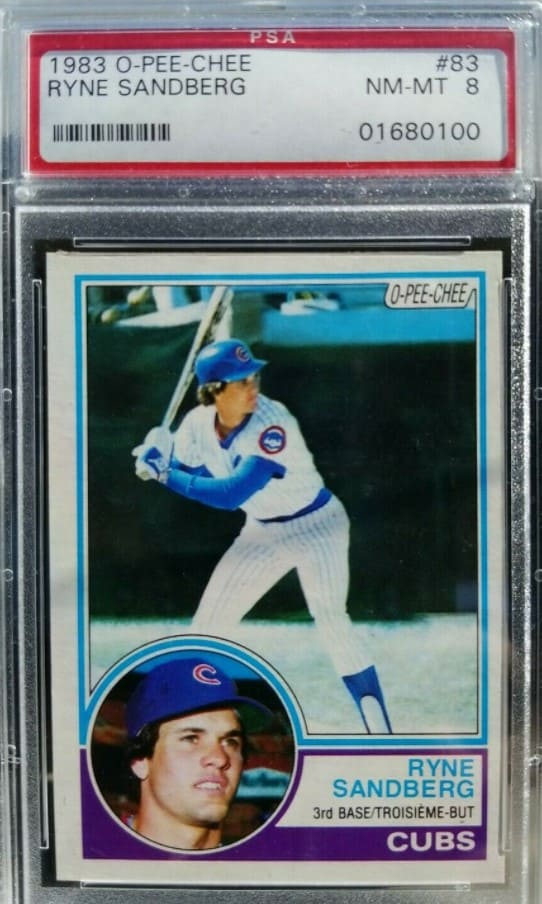 At first sight, there might not be too much to separate this card from the Topps card.

However, when you take a closer look at it, you’ll see that there are many differences that you can spot.

This card was made for the Canadian market, which means that some of the content on the card is in French.

But the charm of this card is in its rarity and unique nature. It’s much harder to get than the Topps card, which means that its price can be even steeper than the Topps variety. It’s near impossible to find a card like this with a grade of at least 9.

The overall design and layout for this card are still the same as for the Topps one. It has that action image in the middle and a face shot of Sandberg in the bottom left corner. As already mentioned, the only true difference is the French wording on the card.

If you’re looking for the rarest and most premium card possible, then the O-Pee-Chee card might be a good fit for you. 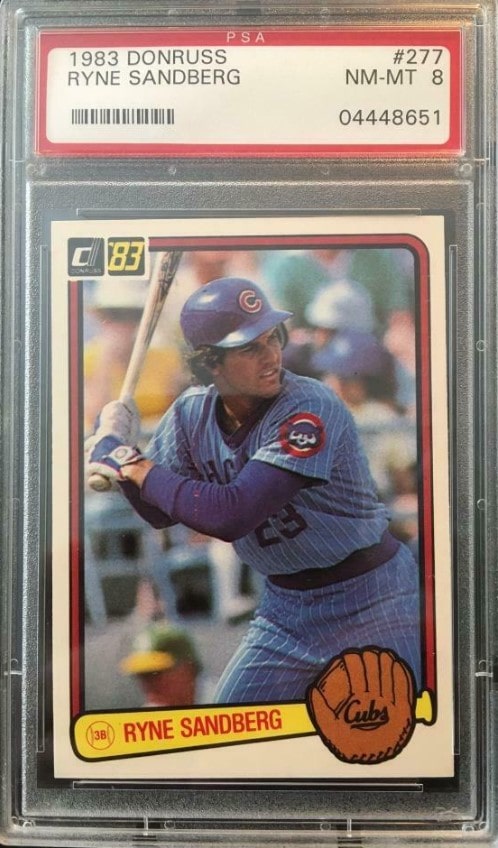 Along with Topps, the 1983 Donruss Ryne Sandberg rookie card is one of the most popular cards of this player to this date.

Donruss has always had a good reputation as a card brand, as it is one of the earliest brands to enter the market.

The Donruss card is a better fit for you if you place a lot of emphasis on the looks. It has that distinct, retro style that many people love, and of course, the lovely image in the middle of the card, which is miles better than the one with Topps.

The overall aesthetic of the card is just cleaner than the Topps card.

The biggest problem with the Donruss card is availability. While it might not be that tough to find this card on the market, it will be much tougher to find higher graded cards – PSA 9 and 10s, of course. That’s where the money will be.

Take note that there are also plenty of autographed cards of this type: 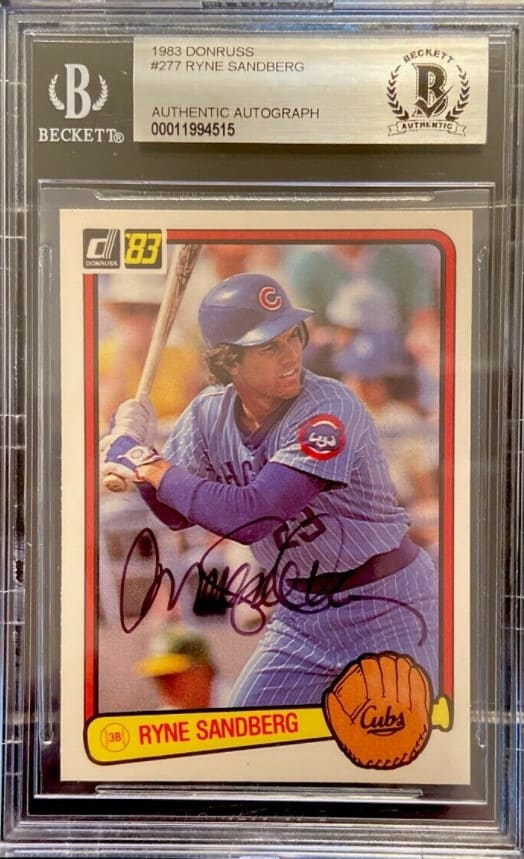 It’s a great option if you like autographed cards, just know that these autographs might not be official. Most of them are signed later on by Sandberg, but you never know – they might as well be forged.

When buying signed, always check to grading or a certificate of authenticity. And if it feels too good to be true, it is. 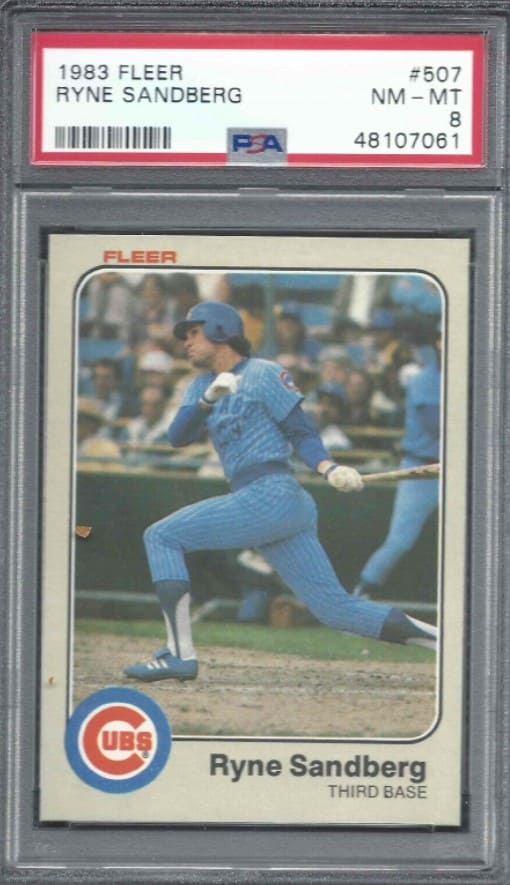 When it comes to the big boys in the card collecting world, there are not many companies that are bigger than Fleer.

This brand comes with a huge reputation, comparable to the level of Topps or Donruss. It also has a lot of tradition, especially when it comes to baseball cards. So if you have a certain level of loyalty for Fleer cards, then this would be the option for you.

It’s a classic 80s card with its design, so you’ll also love it if you like a more retro style.

The image on the card is also of good quality, although not the same level as the Donruss card.

Again, the biggest problem will be availability. There are many of these cards selling out there today, but not many of them will be of high quality. So you might need to dig deep to find a good card that has a higher grade, but you likely won’t have any problems with lower graded cards.

Out of all the three major brands, Fleer seems to be the least popular, but that doesn’t mean it’s not a great choice. It might be even easier for you to find a great card like this for a lower price.

Don’t mind a minor league card? Then you’re going to enjoy taking a look at the following cards. 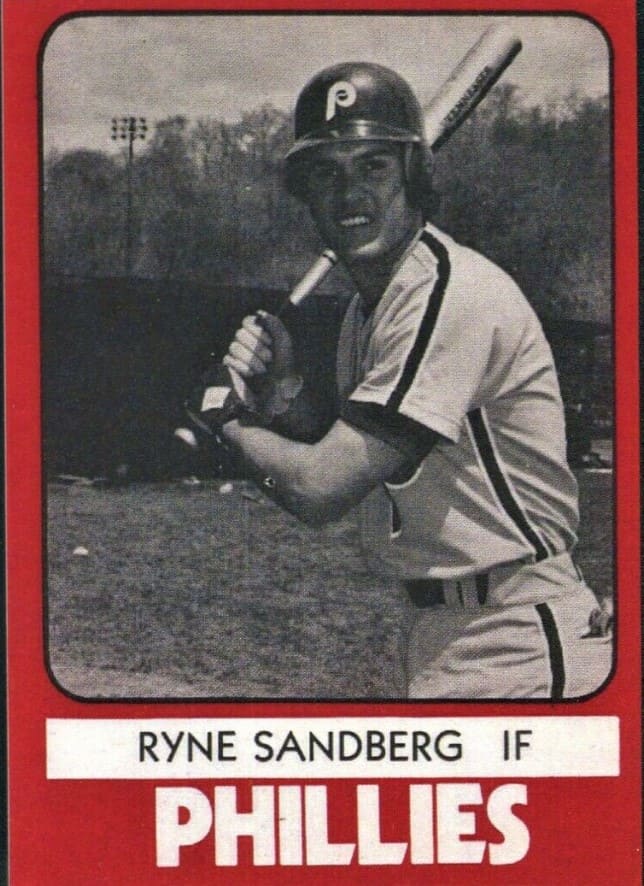 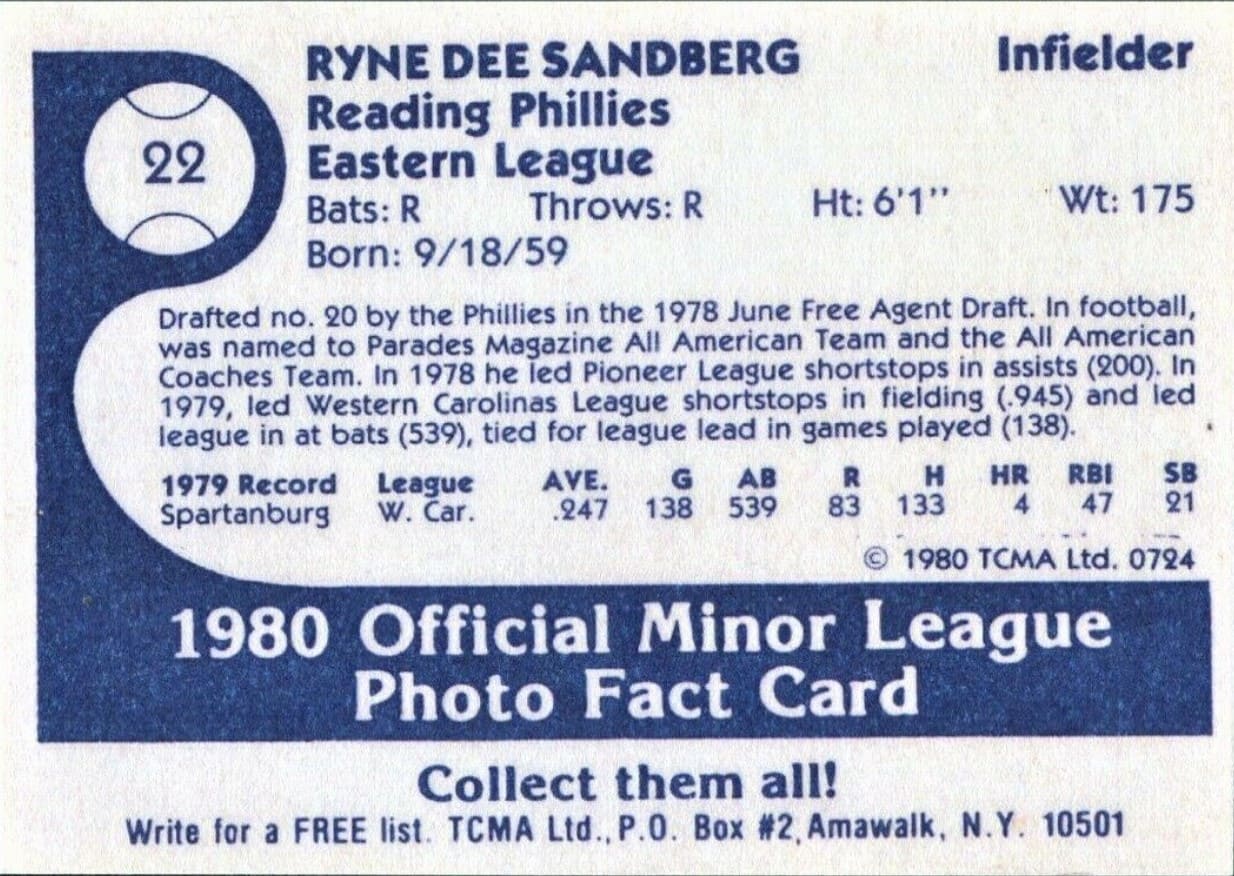 This Ryne Sandberg card is held in high esteem by card collectors.

It is the earliest known card of Ryne Sandberg. It comes from 1980, which means that it comes from the time when Sandberg was still playing in the minor league with the Philadelphia Phillies, where he was highly regarded as an infielder.

The card is quite unique in its way.

It has a very strange background and the image of Sandberg is also not the best, but it has its charm.

The most attractive thing about the card is that there are not many cards that are graded at all, let alone cards that have a good grade. So there’s a lot of potential here if you can find a good card.

The problem is, though, that many of these are kept in poor condition. The border is quite fragile and will often endure damage even if the card is preserved well, while the image might get discolored quite easily.

Plus, the card is rare, so the prices will be quite high even for ungraded cards. But the opportunity is there for the taking if you want to get a card with good potential. 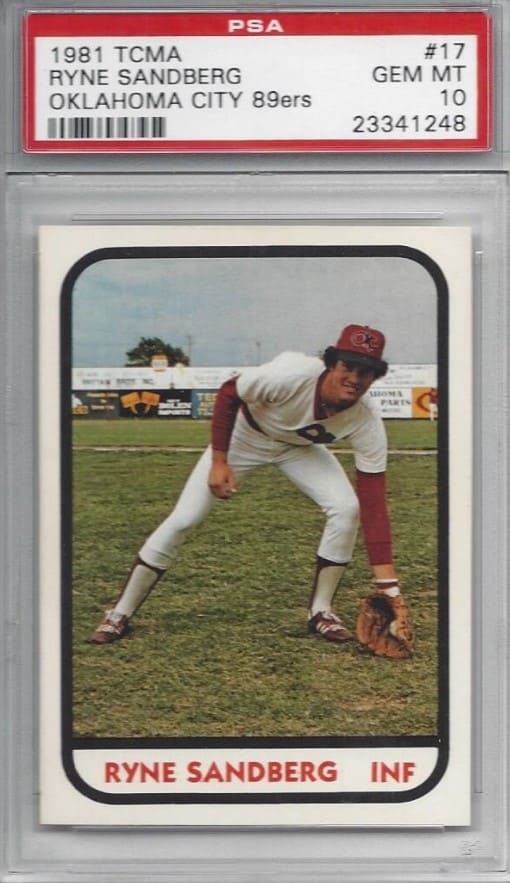 The other great option when it comes to early Ryne Sandberg cards is the 1981 TCMA card.

This card is a bit more easily available than the 1980 TCMA card, which means that the prices for the card could be slightly lower.

However, for the highest card conditions, this one will still cost several hundred if not several thousand.

It’s also vastly different than the 1980 card. The image is much better, as it is colored and Sandberg is actually posing for the shot. It’s also cleaner than the 1981 card, which means that this one is a bit more preferred than the card from a year before.

Since the card comes from 1981, many people refer to it as a rookie card, although it still comes from the minor league. Oklahoma City was Sandberg’s last stop when it comes to his career in the minor league before he was drafted in the major league, so it’s the last card from this period of his career.

The Cubs were initially reluctant about this trade, as they viewed Sandberg only as a backup option. However, Sandberg put out big numbers for Oklahoma, and eventually, he became known as one of the best draft picks for Cubs.

As usual with most Ryne Sandberg cards, the money will be with higher graded cards. These can cost well into the four-figure sums and potentially more, especially for the highest grades.

Unsure which card you would like to buy? Then read this guide.

There are a few things to consider when it comes to choosing your Ryne Sandberg rookie card:

If you’re not that fussy or picky about card quality and grades, then you might even be able to get all three main rookie cards at decent prices.

Of course, the offset will be that these cards don’t have good potential if you want to re-sell them, so they might only be viable if you’re looking to add them to your collection.

How Much Is a Ryne Sandberg Rookie Card Worth?

Ryne Sandberg rookie cards are worth anywhere between $50 to $2000, depending on the quality of the card and the type of card. The biggest determining factor will be the grade of the card. Higher graded cards will be much, much more expensive than lower graded cards and even one grade can change the value of a card significantly.

What Is the Most Valuable Ryne Sandberg Rookie Card?

The most valuable Ryne Sandberg rookie card is the 1983 O-Pee-Chee card. It is the rarest card of them all and it’s only available initially for the Canadian market, so you might struggle to find cards of this type with higher grades.

What Is the Most Popular Ryne Sandberg Rookie Card?

It depends – Topps 1983 seems to get quite a lot of attention. However, both Donruss and Fleer cards from 1983 tend to be popular with card collectors, as well as the 1980 TCMA card, which is more of a luxury card. These cards can cost several thousand in the best conditions possible.

Ryne Sandberg remains a popular figure in the baseball world and many people are still looking to buy his rookie cards. If you’re looking for one, you have some great options, but you’ll want to consider the options carefully and take a look at your budget before deciding.