Robert Parish was a professional basketball player who played in the NBA for 21 seasons — tied for second most in league history. Parish was born on August 30, 1953 in Shreveport, Louisiana, and played college basketball at Centenary College before being drafted in the first round of the 1976 NBA Draft by the Golden State Warriors.

Throughout his career, Parish played for several teams, including the Warriors, the Boston Celtics, and the Charlotte Hornets, ending his career with the Chicago Bulls as the oldest player ever to win a championship (43). He was also a member of the Celtics team that won three NBA championships in the 1980s, and he was a nine-time NBA All-Star.

Nicknamed “The Chief”, Parish was known for his strong and reliable play in the post, as well as his ability to score and rebound the ball. He was also known for his durability, as he played in 1,611 consecutive games during his career, which still stands an NBA record.

After his retirement in 1997, Parish was inducted into the Naismith Memorial Basketball Hall of Fame in 2003. He was also named one of the 50 greatest players in NBA history in 1996. Today, he is remembered as one of the greatest players of all time and a key member of the Celtics’ championship teams of the 1980s.

Below are the top twenty Robert Parish cards on eBay right now.

Find them on eBay 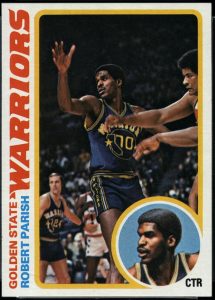 The 1978 Topps Robert Parish #86 is technically Parish’s sophomore card, but nevertheless it is demanded among his fans and collectors as one his early cards. This is the most affordable of Robert Parish rookie and sophomore cards, and it’s a nice piece to pick up on a budget.

The card belongs to the 1978 Topps basketball set, and the set is known to be released in hard times for the NBA, but still managed to include many star players such as Bill Walton, George Gervin, Earl Monroe and Elvin Hayes. The distinctive design of the cards with the bold letters of the team name on the side make this set attractive to hobbyists — and it’s also affordable. 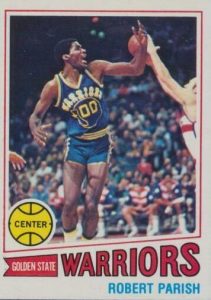 Now this is a true Robert Parish rookie card, and his best card overall. The 1977 Topps Robert Parish #111 was released by Topps in the same season Robert Parish started his NBA career with the Golden State Warriors back in the 1976/77.

Largely considered the most iconic of all Robert Parish cards, his Topps RC is a beautifully designed piece. There is a neat thin red border that goes around the action shot of Robert Parish in a dark blue Warriors uniform. The border is rectangular in card’s shape but at the bottom it becomes diagonal to create space for the Warriors team name in raised letters which gives the card an eye-catching look. Player’s position is placed in the lower left corner in a yellow basketball shape, and the player’s name is displayed at the very bottom in blue letters.

The card is part of the 1977 Topps basketball set, which features a total of 132 cards (less than usual), and the card size was reduced that year, so many collectors considered this set somewhat of a letdown. The set also includes Hall of Famers such as Kareem Abdul-Jabbar, Earl Monroe, Bob McAdoo and Julius Erving, and the Parish #111 is one of the key cards of them all, and certainly the best rookie card on the set.

This Robert Parish RC comes with a white stock back and a grey stock back, and is very popular among Robert Parish fans and hobby people alike. The common issue with this set is bad centering, so if you’re lucky to find a nice centered piece of this card, make sure to grab it for your collection. 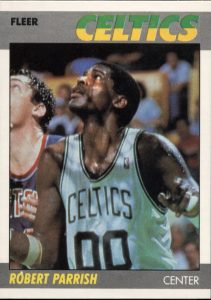 The 1987 Fleer Robert Parish #81 came in 10 years after Robert Parish was drafted, and the future Hall of Fame center had already established his star position in the league at that time.

This Fleer #81 depicts The Chief in the paint, squaring for a rebound in his white Celtics jersey. The action shot is placed in a frame between the grey lines with the Celtics team name in bold green and yellow letters on top, and the player’s name in smaller yellow letters on the bottom.

Part of the 1987 Fleer basketball set, which was the second set that Fleer released in the 80’s, this card commands attention. The set didn’t include many rookies, but had enough star players to look out for — such as Michael Jordan, Charles Barkley, Clyde Drexler, Patrick Ewing, Karl Malone, Hakeem Olajuwon, Dominique Wilkins and James Worthy to name a few.

The 1987 Fleer Robert Parish #81 is fairly popular and is often considered one of the best Robert Parish cards to add to a collection. 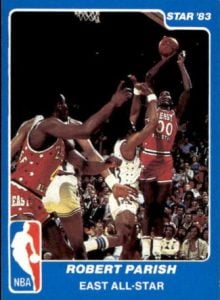 This Star set is significant, as it is the first basketball set ever released by Star Company. As you can imagine, it features some of the biggest and brightest stars of the time like Larry Bird, Magic Johnson and Julius Erving who won the 1983 All-Star game MVP. The 1983 Star All-Star Game set also includes the first ever card released for Isiah Thomas. So the cards from this set are a great way to commemorate and collect these players’ contributions to the game and to a great decade of basketball, which Robert Parish was also an important part of.

The design of the 1983 Star All-Star Game Robert Parish #9 shows a nice action image of him on the court, attempting a jump shot in the red East All-Star uniform. The background of the card is blue, with the NBA logo in the lower left corner and the player’s name on the bottom of the card. It is a simple and minimalistic design, but it looks stylish for that time and corresponds to the NBA official logo. 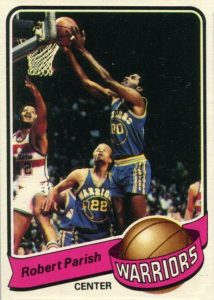 The 1979 Topps basketball set though is not that special. It is considered as one of the lowest-end sets of that era, as the NBA was still struggling. Nevertheless, the set includes a total of 132 cards, anchored by Kareem Abdul-Jabbar, Julius Erving, Pete Maravich, and by the rookie card of Alex English.

The design of the cards in this set is pretty distinguishable as it features the basketball styled logo with the team name in the lower right corner, the player’s name in a diagonal banner on the bottom, and the All-Star stamp for those selected to the NBA All-Star game that season.

For Robert Parish #93, The Chief is seen wearing the blue Golden State Warriors uniform and grabbing a rebound in a beautiful action shot just below the rim. The banner with the player’s name on the bottom is colored pink which gives this card an additional funky touch.

The 1979 Topps Robert Parish #93 is not Robert Parish’s best card, but it is one of his notable early cards for sure. It is a must have if you’re collecting cards of the legendary center, especially if you can find it in mint condition — graded or raw.

There are many affordable options for Robert Parish cards out there, and we have reviewed the most notable ones. The earliest cards of The Chief are certainly worth it, and some of the significant releases like his All-Star piece are worth it as well. The best Robert Parish card, and the most demanded among collectors is of course his rookie — the 1977 Topps Robert Parish #111.

Whatever card of this Hall of Famer you come across, make sure to consider expecting it and adding to your portfolio, as it will definitely be a piece of history. Happy collecting!