Neymar is one of those child prodigy players that actually lives up to it.

To say just how popular Neymar was, he was basically a household name in Brazil BEFORE he made his senior debut for Santos. He was tagged early as the ‘next big thing’, and I’ll tell you what… He lived up to the hype. 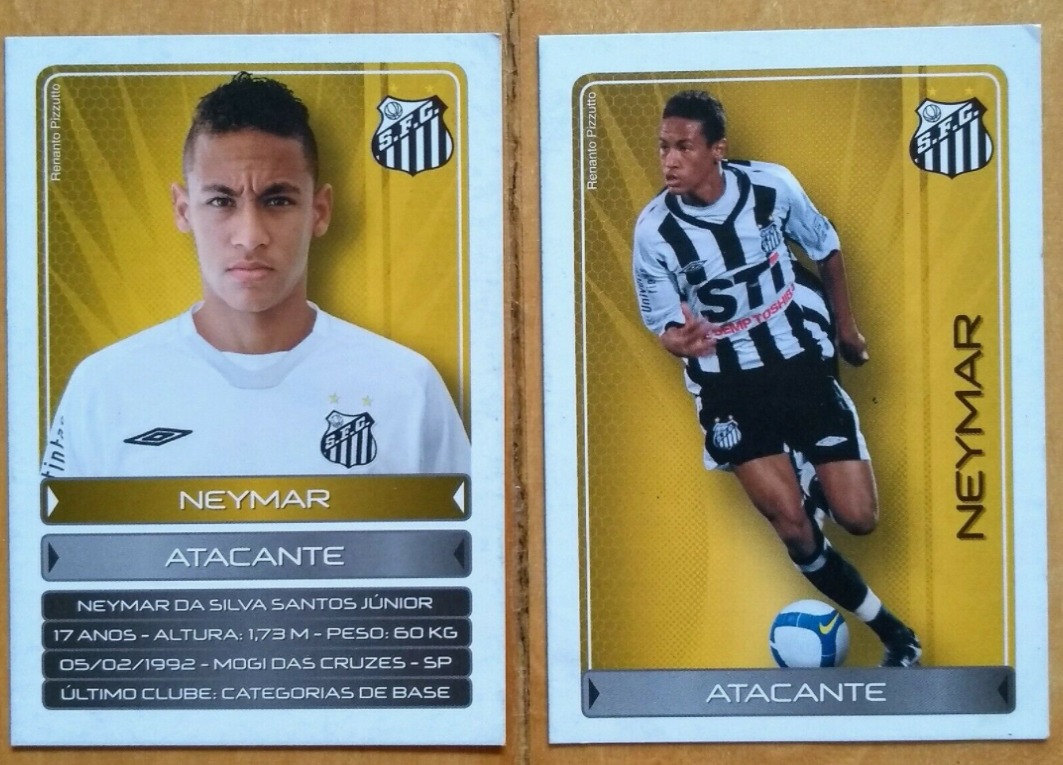 This card dates back to Neymar’s first official season with Santos. In the 2009/2010 season, Neymar made his debut for his boyhood club at the age of only 17.

The card is considered Neymar’s true rookie card because it’s from the season when he made his official professional debut. And as you can imagine, it holds a lot of value and will almost certainly grow in value in the future, as Neymar still has the potential to become one of Brazil’s best-ever players.

It’s a rare card, which makes it even more valuable. Nothing special about this card in terms of looks, although it’s a classic one because of the player on it. The #155 card holds even more value because it shows Neymar in action. 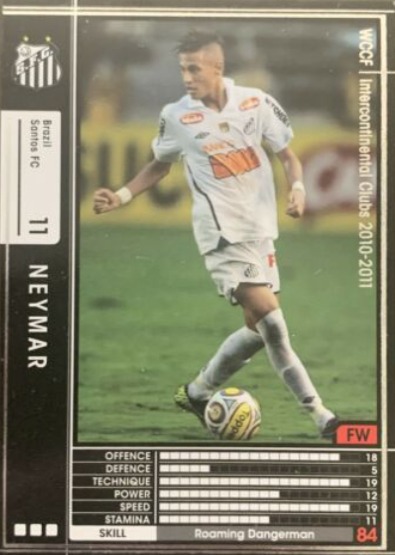 Here’s another interesting card of Neymar from the 2009/2010 season. It’s a Panini card for WCCF (World Club Champion Football), which is a football collectible card game by the Japanese company Konami.

What makes this card truly great is obviously the fact that it’s from Neymar’s first pro season. But also, it shows Neymar’s abilities and strengths below the card. No surprise there – he has the highest marks in offense, speed, and technique.

The card shows Neymar in action, and it has a black border with white text on it. It goes back to the days when Neymar was considered one of Brazil’s brightest talents ever, as he started to attract interest from clubs in Europe with his amazing dribbling skills. 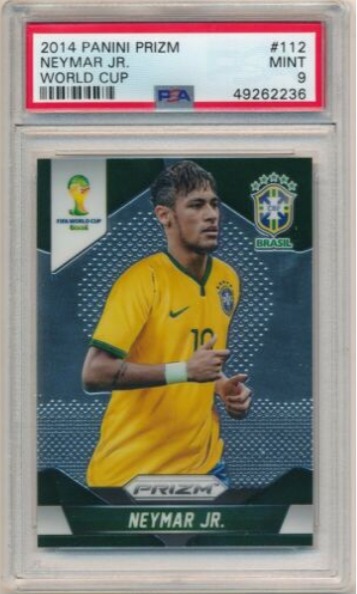 The 2014 Panini World Cup Neymar’s card is not his true rookie card, although it is still a rookie card of sorts. For Neymar, this was his debut appearance at a major international competition, playing for Brazil in the 2014 World Cup.

Brazil was the host nation for this tournament, and there were big hopes for this specific generation of players – among which Neymar was meant to be the leader. This Brazil’s generation had some great players – Thiago Silva, Oscar, David Luiz, Marcelo, Hulk – although Neymar was the best of them all.

It started well for Brazil, as they reached the semi-finals without any problems. However, that’s when they got beaten by Germany – a historic 7-1 defeat. Still, this card will always hold value as it’s Neymar’s first World Cup. The card here is in great condition, and it has some nice parallels – along with an interesting write-up on the back of the card. 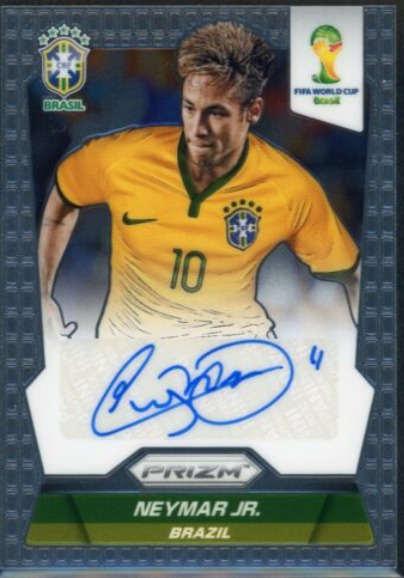 Here’s another Neymar’s card from his debut World Cup campaign – this one is even more special. It’s a World Cup signature card, which are cards with the player’s genuine autographs on the card.

2014 was the first year with certified pack-pulled autographs. The card is in great shape, and it will certainly hold its value for quite some time, especially if Neymar achieves glory with Brazil in one of the major tournaments. And he’ll always be remembered as one of Brazil’s greats, and this was his card from his first World Cup outing. 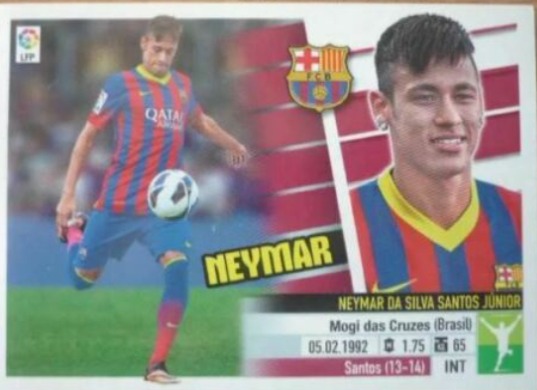 Again, this card is not Neymar’s true rookie card – but it is his first card after transferring to Barcelona. I believe this card will increase in value – or at least hold value for quite some time.

This was the card from Neymar’s first season in Europe. Big expectations were put on Neymar’s shoulders – and he formed a formidable front three with Messi and Suarez – one of the best front lines in history – forming the so-called MSN that was to conquer Spain and Europe.

The card itself features Neymar’s face and a shot of Neymar in action. It’s nothing special in terms of looks, but it has huge significance for Neymar and his career. On the bottom of the card , you’ll find some basic details about Neymar, too.

There are so many awesome Neymar cards out there. He’s even got a few auto-cards with other Brazilian greats like Pele.

This card is very rare. And it will almost certainly hold value – if not even increase in value as Neymar still can achieve some great things in his career, especially on the European stage.

Again, if you’re a sticker lover, this Neymar sticker from the 2014 World Cup will be right up your alley.

Born in Mogi das Cruzes in 1992, Neymar began his career at Portuguesa Santista in 1999 as a small kid with a lot of talent, even back then. In 2003, his talent was recognized by Santos and he was quickly snapped up.

In 2009, Neymar was given the official debut for Santos at the age of 17, after being touted as “Brazil’s next big thing” (they love to do that for talented players – but it was quickly clear Neymar was special).

He scored 136 goals in 225 games for Santos and was bought by Barcelona in 2013, where he formed the famous MSN attack which won Barcelona several titles, including a treble in 2014/2015.

In 2017, Neymar transferred to PSG in a world-record transfer of €222 million. It’s because of players like Neymar that we love to watch football every week.