Justin Herbert’s rookie cards are gathering a lot of attention, as many card collectors are looking towards these cards.

Herbert was drafted in 2020 by the LA Chargers where he already had a decent reputation thanks to his stellar college performances. He’s the kind of quarterback that can make a huge difference in a game, which makes him a popular player among both coaches and fans.

In terms of Justin Herbert rookie card options, you’ll have quite a lot to choose from. There are many options to choose from regardless of whether you’re on a budget or are looking for premium cards.

Let’s start with some more mainstream cards and move on to more premium options later on. 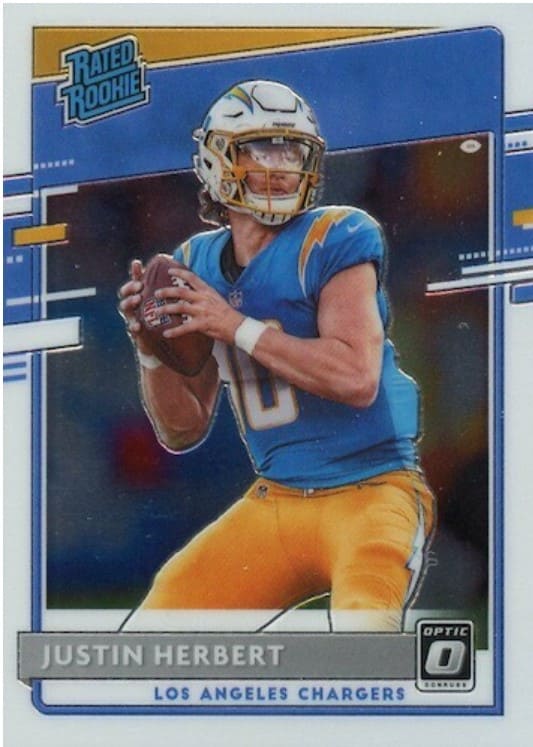 If you follow the world of rookie cards regularly, then you might already know that Donruss Optic cards are almost always near the top of the list, especially when it comes to football cards.

These are some of the most collector-friendly cards in the business.

They’re a great investment because the print runs are quite high, which means they don’t tend to be very expensive. They also have a potential for the future thanks to a good brand reputation.

In addition, there’s an extraordinary level of variety with Donruss Optic cards. You can choose from dozens of different parallels, which will suit those who want something a bit more colorful or rare, perhaps.

The base card can be quite affordable but the so-called Prizms will inevitably be expensive, especially the ones that aren’t as common. 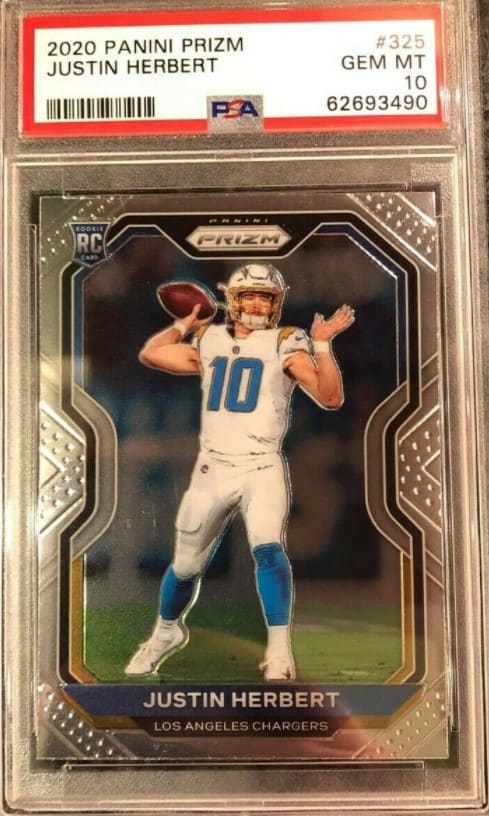 Similar things apply to Panini Prizm cards as for the Donruss Optic cards – the base cards are common and some of the most popular cards in football.

You’ll get that typical Panini Prizm design that’s so unmistakable, especially for these modern cards. If you own a Panini Prizm card from recent years, chances are you’re going to be familiar with the design of this Justin Herbert rookie card.

For casual collectors, the base cards will perhaps be the best option, as they’re easily available.

They can be had for low prices but it’s the Prizms where the money’s at. If you’re more of a premium card collector and you’re prepared to spend several thousand on a single card, then you might be interested in some of these parallels.

Panini Select might be an interesting option for you for many reasons.

Firstly, it’s because there is some variety with these cards. There are four different cards that you can collect from this massive Panini Select set: #44, #144, #244, and #344.

Each card is at a different level; concourse, premier level, club level, and field level. Each level is an increasing level. With each increasing level (and increasing card number), these cards become rarer and rarer.

This means that at the lowest level (concourse), the #44 Justin Herbert card is going to be the easiest to find and consequently, the least expensive.

On the other end of the scale is the #344 card (field level), which is the hardest to find and thus the most expensive.

Are you a perfectionist? Then Panini Select might be an interesting option for you as you might want to look for all four cards from all of these different levels. 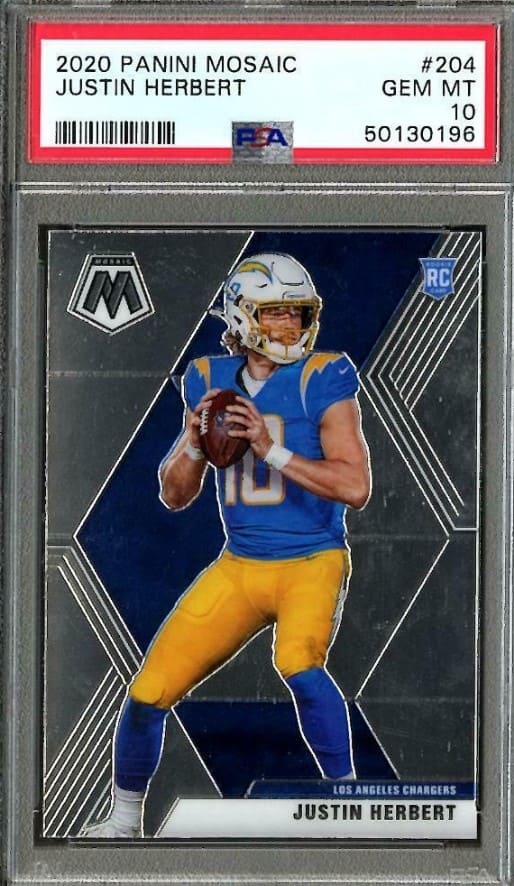 This Justin Herbert rookie card from Panini Mosaic might be one of the most interesting options that you can choose from.

The Panini Mosaic card brand debuted in 2020, making it one of the most popular Justin Herbert rookie cards. There was quite a lot of interest in this brand as it came out, and pair that with the popularity of Herbert and you get a winning combination.

On the whole, this might be in the top most searched Justin Herbert rookie cards.

It also has that high-quality finish that adds a bit of gloss to the card, which is a neat touch. Despite it being a base card, it’s one of the more polished cards you’ll find on the marketplace.

In addition, Mosaic is also an interesting brand thanks to the variety it brings to the table.

There are some interesting parallels to choose from, such as Mosaic Silver, Red, Gold, and others. 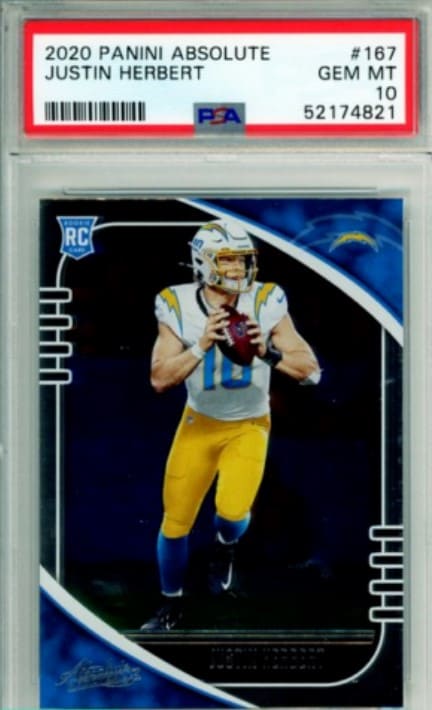 For budget card collectors, Panini Absolute will be one of the best choices when it comes to Justin Herbert’s rookie cards.

Part of the appeal for this card is the reputable card brand that is Panini Absolute. Even though it’s seen as a budget option in the past few years, it still has a good reputation thanks to its extensive history.

While it might not be of the same quality as some of the higher-end cards, this can still be a solid option if you’re not willing to spend thousands on a card.

If you’re new to collecting rookie cards or if you’re just looking for an easy option to add to your collection, you won’t be disappointed by Panini Absolute. It’s quite easy to find and not very expensive even in the best of conditions. 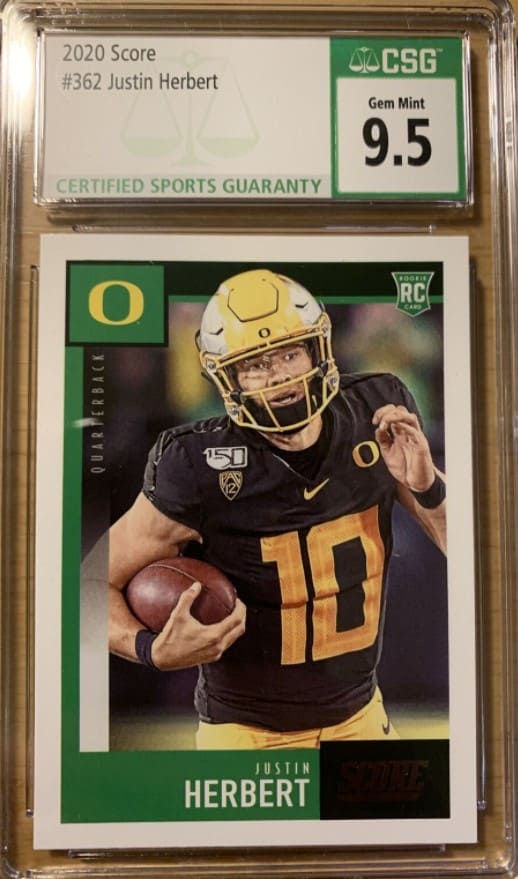 Score is a card brand with some significance. It has a historic nature to it, as Score cards were popular in the early 1990s.

In terms of looks, this card is nothing special. It has a white border and some green graphical elements on the card, and an action image of Justin Herbert in the middle.

It’s also quite easily available, which means that the prices for this card are going to be relatively low, making this card a great option for budget collectors.

Interestingly, there are also no parallels for the card – just the base card, which is available to you at modest prices. 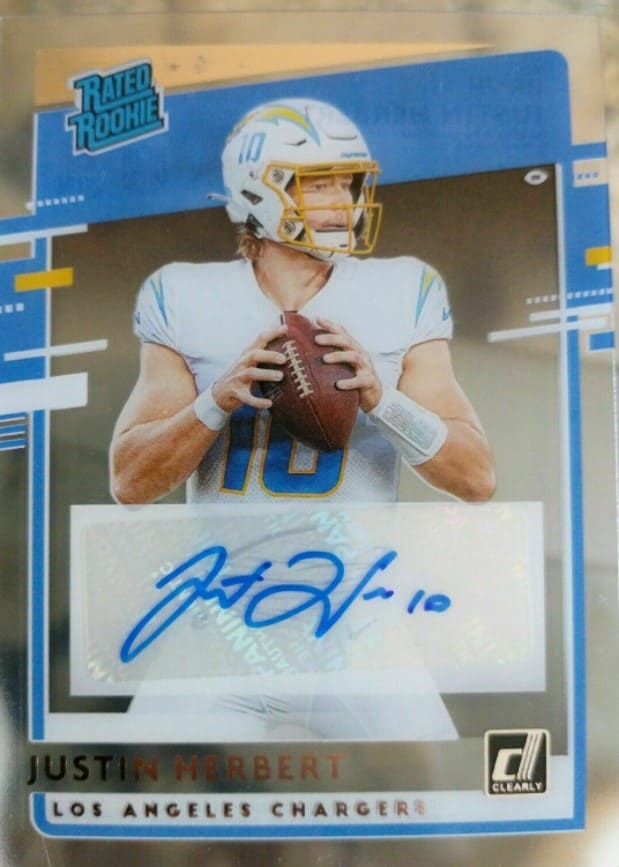 You may have spotted that this Clearly Donruss card also dons the famous Rated Rookie sign in the top left corner – that’s because it comes from the universe of Donruss football cards that come out regularly.

One of the main differences between this Donruss card and the rest is the autograph.

This might be one of the best picks for you if you’re looking for a relatively inexpensive card for Justin Herbert that still has an autograph on it.

Surprisingly, it might have similar prices as the base Donruss Rated Rookie card. The overall looks and build of the card are quite similar to that one, except that this card doesn’t use Optichrome, which slightly decreases its value.

Still, it’s a solid option for you if you’re looking for a decent card with an autograph that won’t cost you too much. 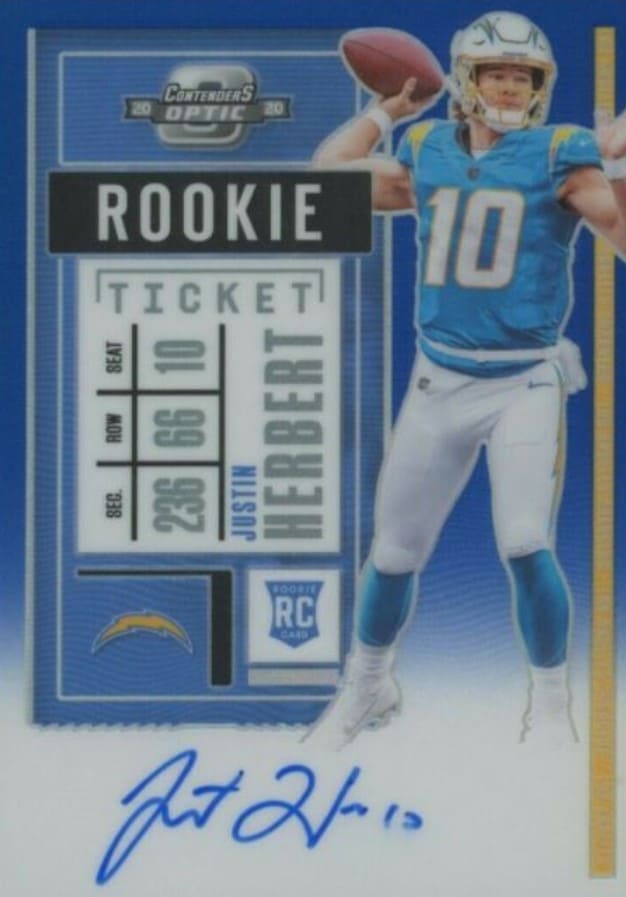 If you know about Panini Contenders, then you probably know that these cards often fall in the premium category. And while this is not the most expensive Justin Herbert card out there, it’s almost in that category as well.

The card has that typical Panini Contenders design where the card looks like a ticket, which will make you feel like you own something that only belongs to you.

The overall design of the card is as elegant as you might expect from Panini Contends. But the star of the show here is the on-card autograph, which is much cleaner than most other autographs of Justin Herbert that are found on cards.

In terms of prices, this one is going to be a bit more expensive than the mainstream cards we’ve covered above, but still not among the most expensive Justin Herbert cards, which puts it somewhere in the middle.

Another autograph card that might interest you is the Panini Origins Justin Herbert rookie card. It’s not as expensive as the Flawless or Impeccable cards, but it still belongs into the medium category of cards at least.

The elegant design and the autograph are two of the most appealing factors for this card, as well as the quality card stock, which will make this card feel beefy when you hold it in your hands.

Consider this option if you’ve got a medium-sized budget ready to go for one of the Justin Herbert rookie cards. 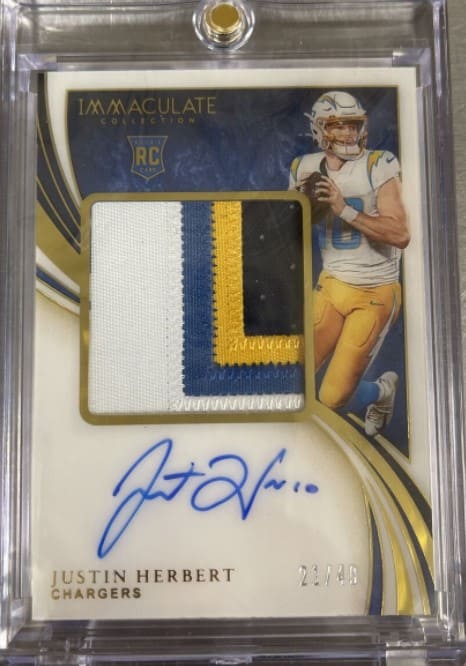 The 2020 Justin Herbert Immaculate card is a thing of beauty.

This card is found in the Immaculate hobby set which cost up to $2000 when released, which means that the lucky few people that got this card are looking to sell it on for just a bit more.

Originally, there were 49 of these cards released, and they were scattered through these hobby boxes that contained six cards each – which meant that you had a relatively slim chance of getting this exact Justin Herbert card.

If you feel like you’ve missed out on it if you’ve bought the hobby set, now is your chance to get it for yourself.

Just know that it can get quite expensive, especially if it is graded. Trouble is that there are quite a lot of ungraded cards of this type listed out there, so you might want to be a bit careful before buying – hands-on inspection would be best in this case! 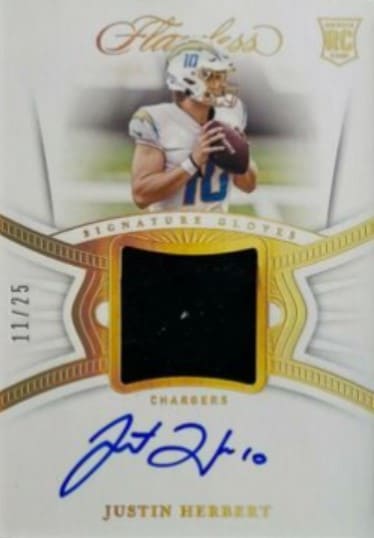 The 2020 Panini Flawless Justin Herbert cards are usually numbered to 25 copies, which makes them scarce.

However, there are also many varieties of this card that only have 10 copies or less.

For example, Rookie Signatures and Gem Signatures both are limited to only 10 copies, which means they’re going to sell for a bit more than this base card, which has 25 copies.

However, whichever card you go for, you can expect to pay significant amounts of money for it. Obviously, the rarer the card is, the more it is going to cost, but even this card that has 25 copies is going to be worth thousands if not in the five-figure territory. 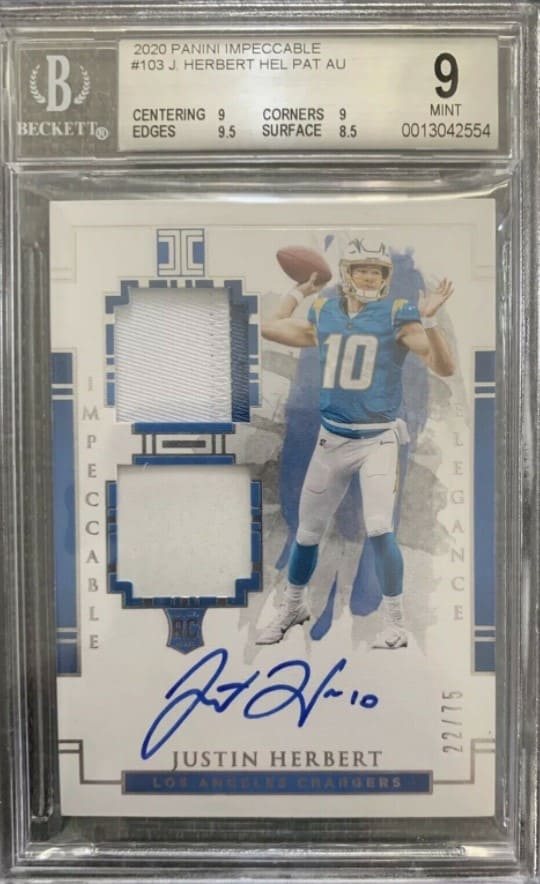 While we’re on the subject of premium rookie cards, we simply couldn’t leave out the Impeccable cards for a few reasons.

The first one is that these cards are quite rare. There are only 75 copies to its name, which means that only the lucky few were able to get their hands on this card.

Secondly, it has an autograph and a jersey patch, making it one of the most desirable card options out there.

And of course, if you have seen or collected Impeccable cards before then you know that elegance is an important factor with these cards.

All this comes at a price, of course. These can cost several thousand if not more, depending on the grade of the card (and if it is graded or not, of course). There are also some colorful varieties that you might be able to find, although these are even rarer and more expensive than the base card. 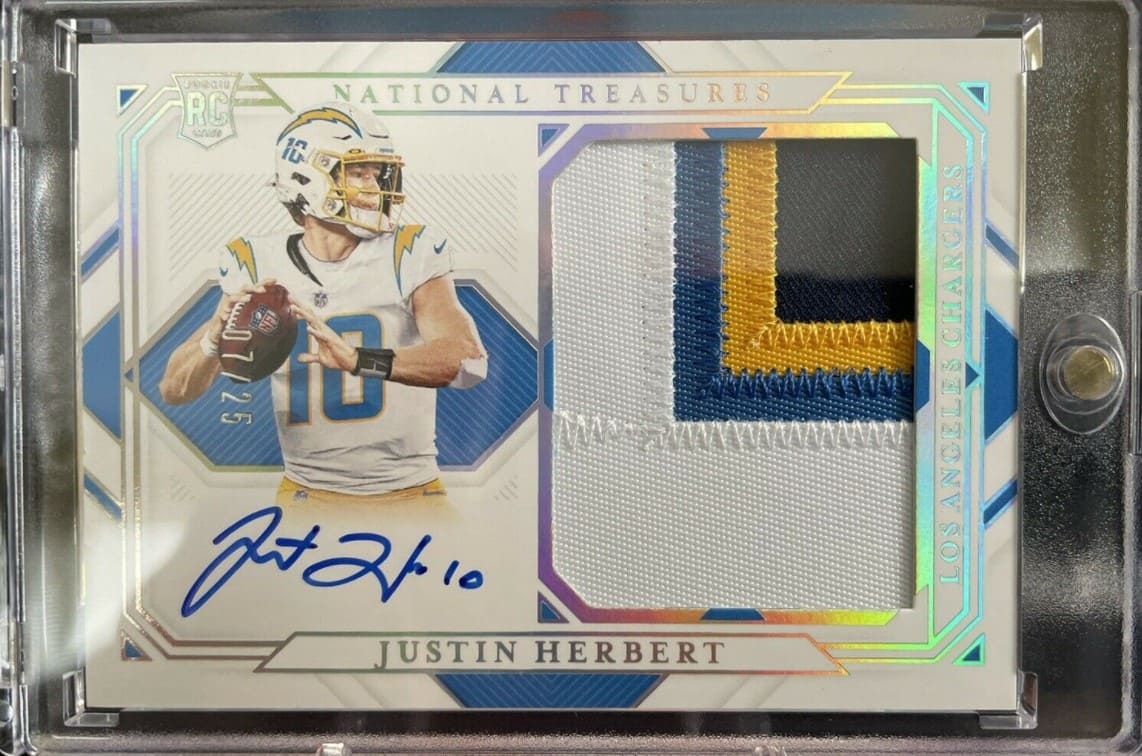 We’ve saved the best for the end.

You’ll get everything you’d expect with this premium option. There’s the autograph, the jersey patch, and of course, the limited print run. We should also mention the quality of the card which is on a very high level.

Overall, this card is an experience in and of itself.

It’s only going to be an option for the very high-end collectors, as it might cost well into the six-figure marks, though.

There are even rarer varieties of this card, such as the RPA card with only 3 copies, which will get even more expensive than the base card.