Eli Manning is one of the best legends in the history of the New York Giants. There have been a few ups and downs in Manning’s career, but for the most part, his trajectory is mostly on the upwards.

While playing with the Giants, Manning won two Superbowls while also winning two Superbowl MVP awards, making him one of the most recognizable faces of the league.

If you’re looking for an Eli Manning rookie card, then you have many different options – around 50 rookie cards have been released.

So if you’re on a budget or if you’re willing to go all-in on an Eli Manning rookie card, you’ll be able to find something for you on this list.

We’ll start this overview of Eli Manning’s rookie cards with some of the more common cards, and then we’ll also take a look at his rarer cards towards the end. 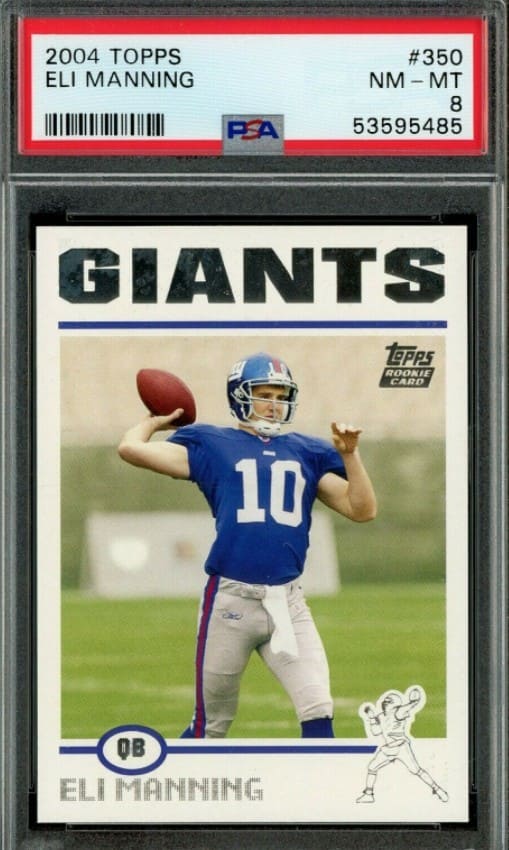 Let’s start this list with the Topps rookie card from 2004.

The high print run will allow you to get this card with ease in the best possible conditions, and you won’t have to overpay as well.

Nothing is outstanding about this card; it has a more classical design to it, as there are no major graphical elements or intrusions on the card. The image of Manning is clear and neat, so that’s a big bonus for this card.

Consider this if you’re on a budget as this card is an ideal starting point for many collectors out there.

Topps Draft Picks is also worth a mention. 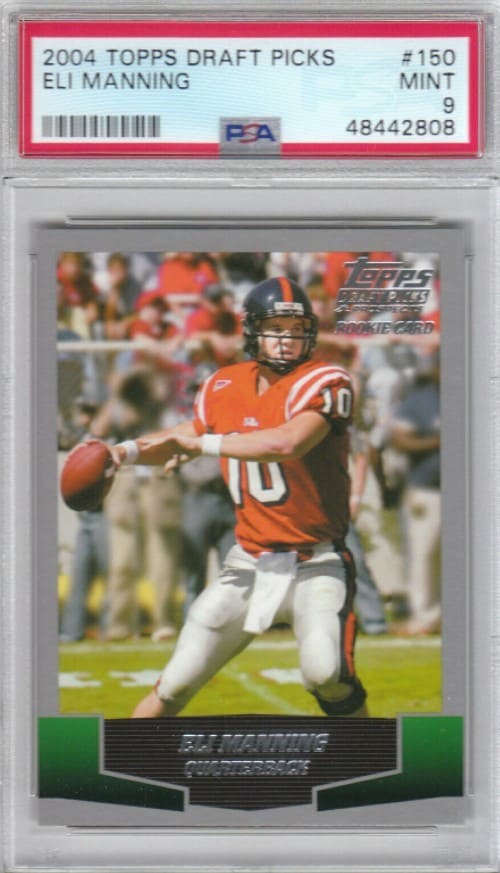 You can also choose between Topps Pristine and Topps Total cards, but they’re not as popular as the former two cards from Topps. 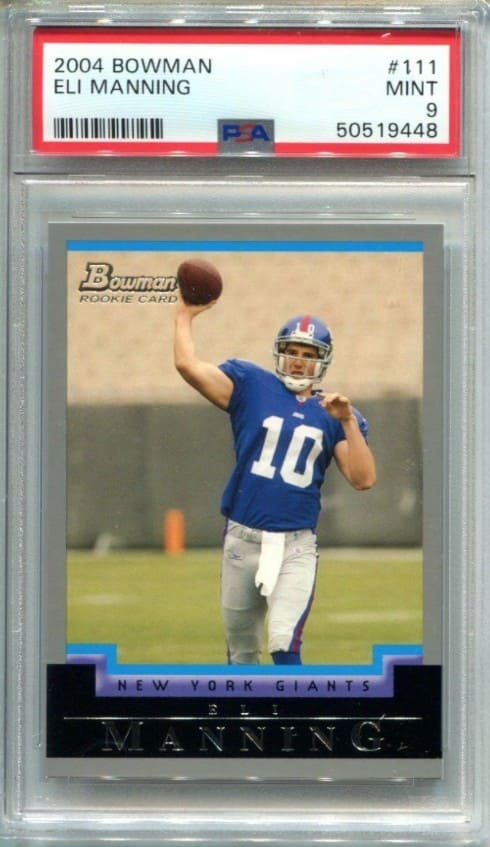 In terms of values and prices, the Bowman Eli Manning rookie card ranks very close to the Topps card.

It is not the most expensive or pricey card in the world, which makes it a great option for beginners and budget collectors.

Bowman cards, in general, are a great investment if you’re a football fan. They’re not the most prestigious cards out there, but they get the job done in terms of how they look and their long-term potential. 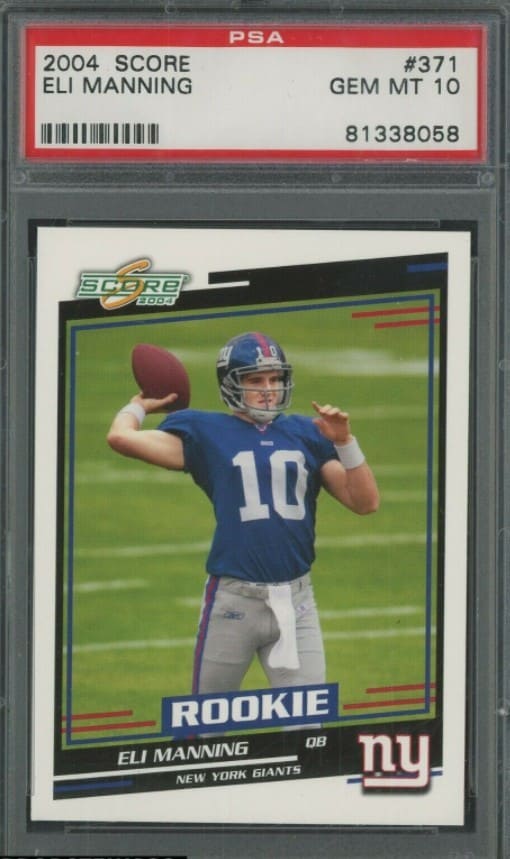 This 2004 Score card completes the trifecta of the best and most common budget rookie cards for Eli Manning.

Score is, historically, one of the most prominent football card companies. It was particularly popular in the 80s and 90s, but it still remains to be one of the most recognizable brands, although it’s not the most valuable out there.

Again, if you’re looking for a steady and sensible investment, then you simply can’t go wrong with this one.

You might notice that the image on the card is almost exactly the same as on the Topps card, which might be a slight turn-off for some people. But if that doesn’t bother you too much, then you’ll love how easy it is to get this card for a relatively low price. 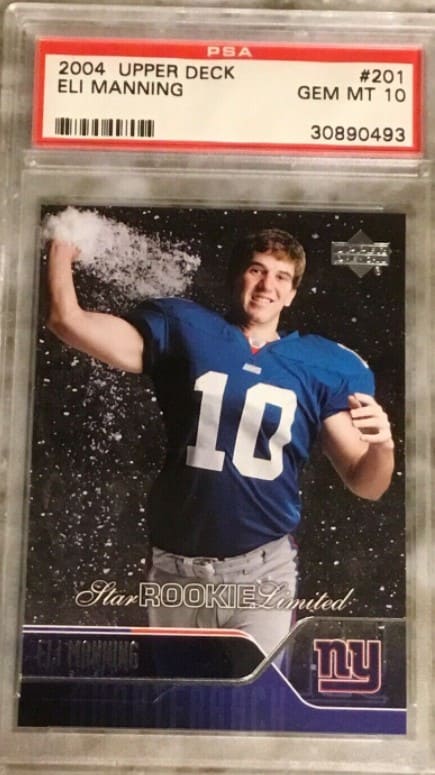 If you’re looking for a good budget option, then you’ll like the look of this Upper Deck card from 2004.

It’s a bit different than the rest of the budget cards; while it doesn’t have an image with a green, bright background of a football field, it is certainly a bit unique.

This card had a huge print run and an interesting image on the card – it seems as though Eli Manning is throwing stardust right at you, instead of throwing a football.

You can still get this card for a reasonably low price, which is great news if you don’t have hundreds of thousands of dollars to spend. 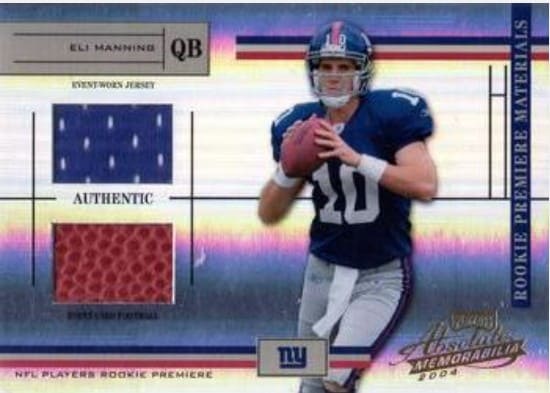 We’re moving in the mid-tier category with this Absolute Memorabilia card.

It’s the first card we feature on this list that has a jersey patch, which makes it an excellent option if you’ve got a bit more to spend.

The problem, however, is that these cards are few and far between.

You’re going to have a tough time finding this card on most online marketplaces because it’s not the most common card in the world, but it’s also tough to find in higher conditions.

This, and the on-card jersey patch make it a slightly more expensive option. 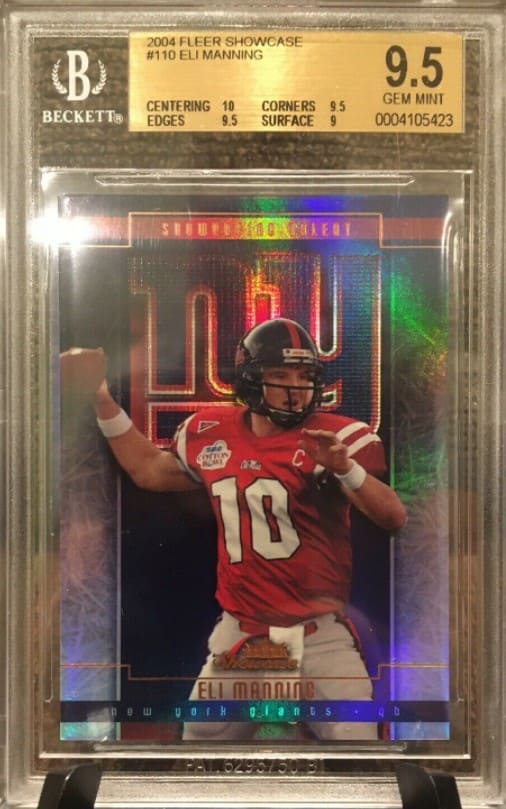 Fleer Showcase is your option if you’re looking for a shiny and colorful card.

It has a lot of action going for it, which made it a very desirable card back in 2004. Back then, there still weren’t that many parallels and alternatives to choose from, so it was very desired.

While Fleer released several rookie cards for Eli Manning (including Fleer Authentix, Genuine, Inscribed, Platinum, and Sweet Signs), the Fleer Showcase is the most notable example from this card brand. 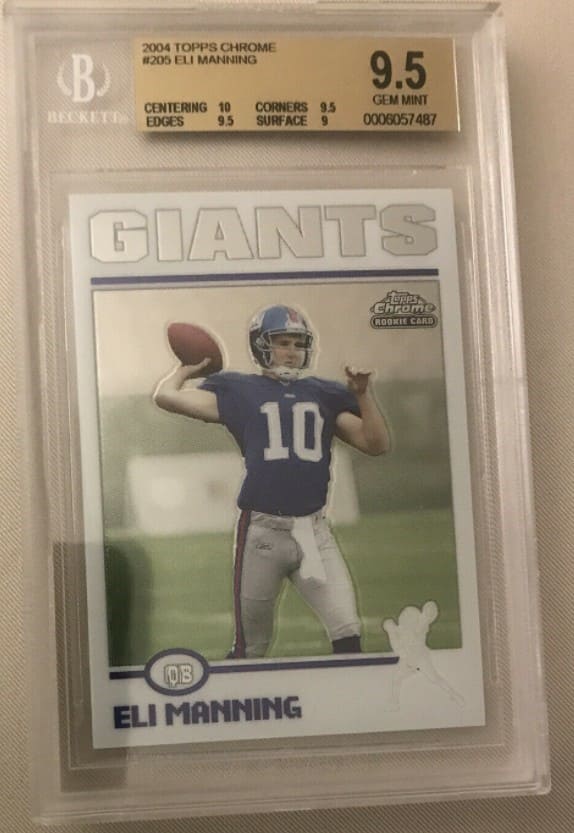 While we’ve already featured a Topps rookie card of Eli Manning, we simply need to mention the Topps Chrome card as well.

This is the better version of the base Topps card, because it is of much higher quality, and it is also more expensive than the base card.

The main reason why this card is more expensive is that it is made out of more durable materials than the base Topps card, and it’s also rarer.

You won’t find as many listings for this one as for the Topps base card, but the ones that pop up tend to be slightly more expensive and the values can go into thousands. 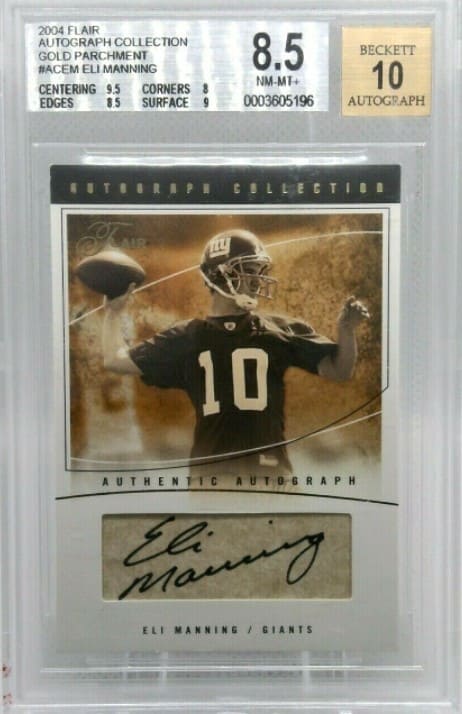 If you like your cards with autographs, then you’re going to have to take a look at something like Flair.

This is a mid-range card that can vary in terms of values depending on the quality of the card you get and the parallel you choose. In the image above, you’ll see that this card is the Gold Parchment variant, but there are also several base cards to choose from.

The main distinguishing feature of this card is the autograph, which is nicely etched on a piece of paper that is inserted onto the card. It fits very nicely with the colors and the overall design of the card. 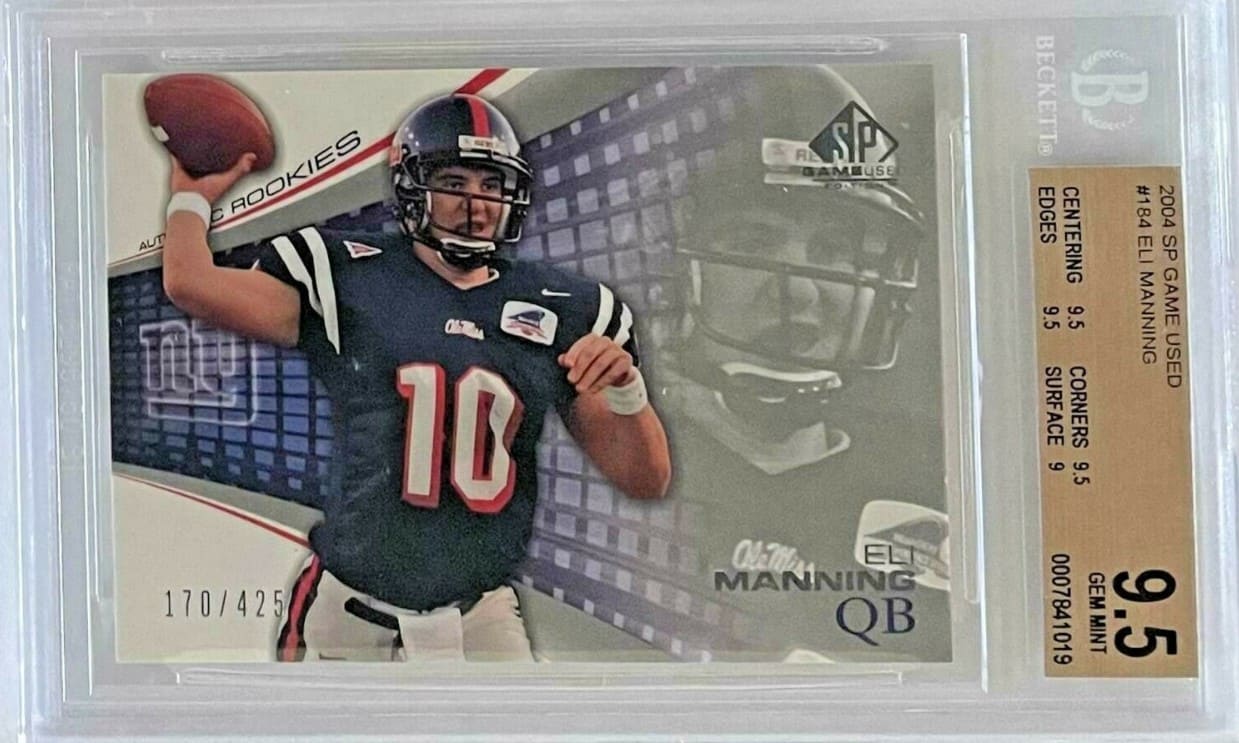 The last card from the mid-range category we’re going to mention is the SP Game Used Eli Manning rookie card.

This is not the last card from SP on this list, but perhaps the least expensive one you can get.

There were 425 cards of this type originally printed, which makes this card a bit exclusive and perhaps a bit harder to get, which might increase the values for the card. 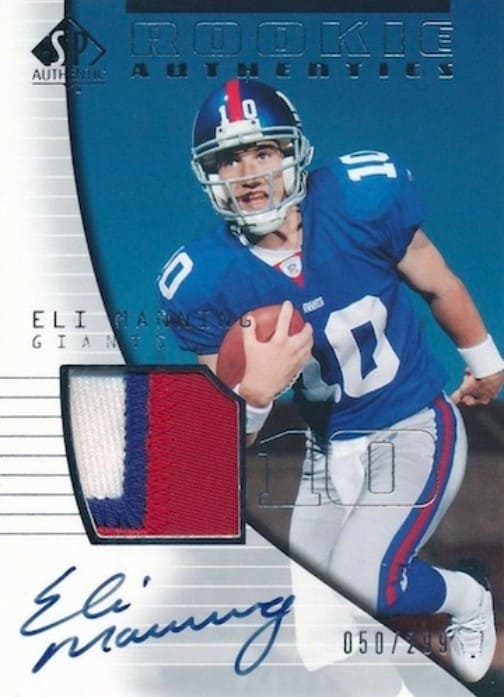 While we’re on the subject of SP cards, let’s take a look at the most valuable SP card, the SP Authentic Eli Manning rookie card.

It is one of the most preferred and sought-after cards on the market, but it’s also a bit exclusive at only 299 copies.

This means that you’ll have to work extra hard (and spend a bit more) to get this card. It can cost several thousand dollars, this one.

It has everything you’ll need to have from a premium card: a limited print run, the autograph, and the patch of the jersey on the card, as well. 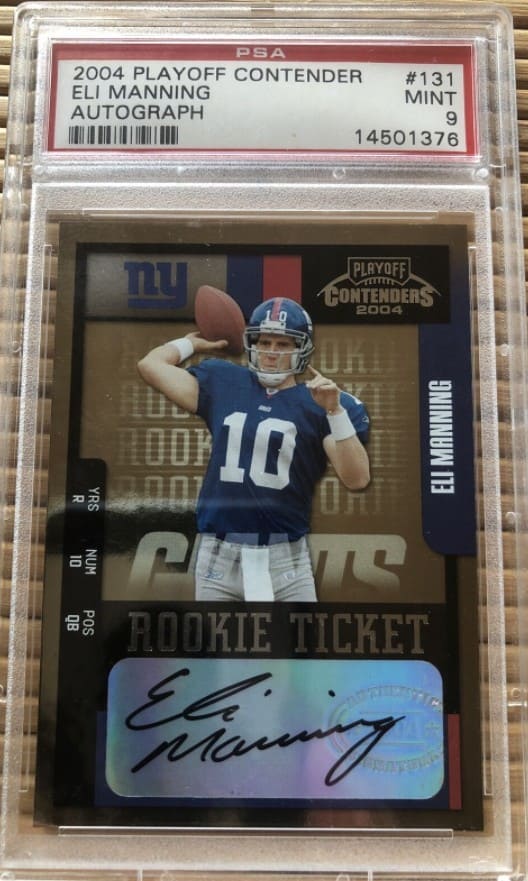 If you’ve been in the card collecting world for a while, then Playoff Contenders cards will be a known entity for you.

These almost always rank near the top of rookie card lists because of their higher values and their rarity.

This one also has an autograph, which makes it extra desirable if you’re looking for a card with an autograph on it. 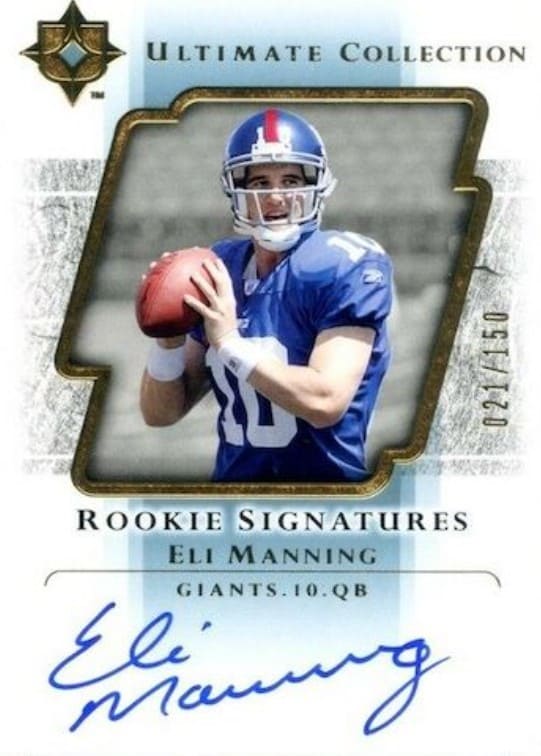 2004 Ultimate Collection is a decent option if you’re prepared to spend a bit more on an Eli Manning rookie card.

It is limited in numbers and it has an autograph, making it a great premium choice.

It’s not the most expensive Eli Manning card out there, but definitely, a worthy option if you’re looking to spend a bit more. 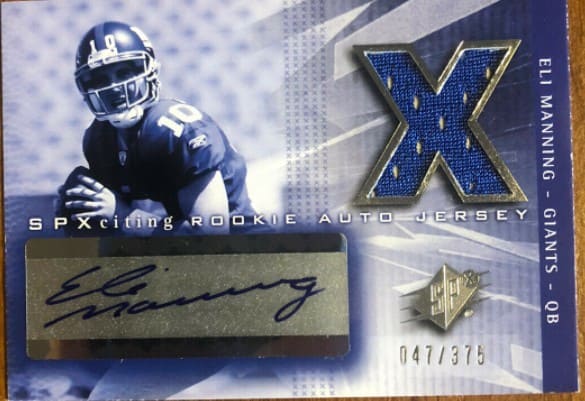 Last but not least, we have the SPx rookie card with an autograph and a jersey patch on it.

This card only had 375 copies ever released, making it one of the rarest Eli Manning rookie cards out there.

This premium card can cost several thousand dollars to buy, so you’re going to love it if you’re prepared to spend a bit more.