Dave Cowens was known for his tough and physical style of play. Born in 1948, in Newport, Kentucky, Cowens played college basketball at Florida State University, where he was a two-time All-American. He was selected with the fourth overall pick in the 1970 NBA draft by the Boston Celtics, and went on to have a successful 10-year career with the team, only joining the Milwaukee Bucks in his last season in the league.

Dave Cowens was inducted into the Naismith Memorial Basketball Hall of Fame in 1991. He made both the 50 and the 75 Greatest Players in NBA History lists, and his number 18 jersey was retired by the Celtics. Cowens will always be remembered as one of the greatest players in Celtics history and one of the best big men to ever play in the NBA.

This article goes over his best cards for collectors.

Cowens is one of the greats.

Cowens was a versatile player who could play both the center and forward positions. He was known for his tenacity and hustle on the court, and was often matched up against the opposing team’s best big man. Dave Cowens was an excellent rebounder and defender, and was named to the NBA All-Defensive First Team once and to the Second Team twice. He was also a capable scorer, consistently averaging 20 points per game.

Below are the twenty most expensive Dave Cowns cards on eBay right now.

There are two Dave Cowens rookie cards in existence — both released in 1971. You’ll see below that the first item is not really a card though, but a “trio” sticker that features three players in one. The second item is the true Dave Cowens RC, and it is deemed his only one real rookie card. 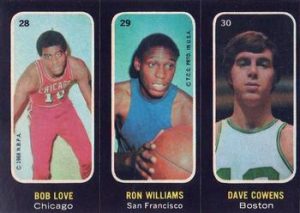 The 1971 Topps Trios Stickers is a rare and valuable sports collectible featuring three NBA players. There are two more besides Dave Cowens, namely Bob Love of the Chicago Bulls and Ron Williams of the San Francisco Warriors. This piece is part of the 1971 Topps Stickers set, which was the first set of stickers produced by Topps, so it sort of marked the beginning of a new era of collectible cards for basketball fans.

The design of the sticker is typical of the era, with a head shot for Cowens and no team name because of licensing issues. The entire item is die-cut into three individual stickers, with each player’s sticker featuring their name and number.

From Dave Cowens’ standpoint, this sticker is important because it features him as a member of the Boston Celtics, which was his first team in the NBA. The 1971 Topps Trios Stickers “card” is essentially the earliest release featuring Cowens as a professional basketball player. For Cowens’ collectors and fans, this edition is significant because it is a rare and valuable item that captures an important moment in the player’s career. Nevertheless, this sticker is pretty affordable. 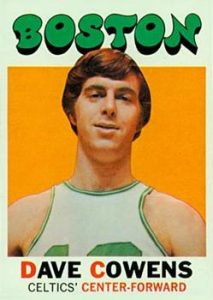 Now this one is the true Dave Cowens RC, and his most popular card overall.

Being the best Dave Cowens rookie card, the 1971 Topps Dave Cowens #47 is also one of the most beautifully designed cards of that era. The design is fairly simple but attractive, with the team name on top of the card in team colors — green for Boston. The head shot of Dave Cowens is placed on a yellow background, and he’s wearing a white and green jersey with no team name because of Topps’ licensing issues with the NBA at the time. Player’s name and position are displayed on the bottom of the card, in black print, with the first letters capitalized in red.

The 1971 Topps Dave Cowens #47 belongs to the 1971 basketball set, which is a notable set, and not just because of the catchy design. The set consists of 330 cards, featuring many of the top players from the era, including such Hall of Famers as Kareem Abdul-Jabbar, Wilt Chamberlain, Jerry West, and Bob Lanier rookie.

This card is fairly popular, being the RC, but nevertheless pretty affordable, and if you’re looking for the best Dave Cowens card for your collection, make sure to consider this 1971 Topps piece. 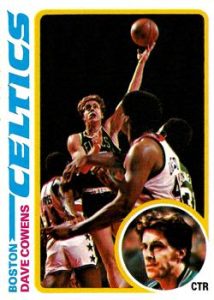 The 1978 Topps Dave Cowens #40 is one of the most basic Dave Cowens cards, but it is still a notable item of the Celtics great. Dave Cowens is pictured here going up for a layup over the defenders, in his green Celtic uniform.

The overall design of this Topps card is recognizable by collectors, with the thick yellow border around the action shot and the team name and player’s name in stylish vertical writing on the left side of the card. Dave Cowens’ head shot and the position are placed in a circle in the lower right corner of the card.

The 1978 Topps Dave Cowens #40 belongs to the 1978 Topps basketball set which is somewhat significant, because the size of the set was smaller and there was no subsets. It was the second year in a row when Topps released this standard-sized set, which included 132 cards. A number of prominent players are a part of the set, such as Julius Erving, Pete Maravich, Kareem Abdul-Jabbar, and rookies of Jack Sikma, Dennis Johnson, Marques Johnson and Bernard King. 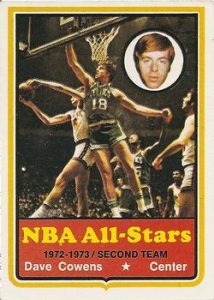 The 1973 Topps Dave Cowens #40 is Dave Cowens’ All-Star card. This fact alone makes this card truly valuable and important for the collectors, because Dave Cowens was not just the MVP of All-Star game in 1973, while powering East to the win with 15 points and 13 rebounds, but he was also the MVP of the NBA that season.

The design of this Topps #40 is pretty simple, showing Dave Cowens jumping under the basket in his green Celtics uniform. The head shot is placed in a circle in the upper right of the photo. Below the main image, there is a red box saying NBA All-Stars, and mentioning that Dave Cowens was part of the All-NBA second team in 1972-73. Player’s name and position are underneath, with a star in between them, denoting the All-Star edition of this card.

The 1973 Topps basketball set was not too popular at first, because the design was not accepted well, and because it didn’t have many significant rookies. However, this set also includes legends like Julius Erving, Pete Maravich, Kareem Abdul-Jabbar, Wilt Chamberlain and Jerry West. 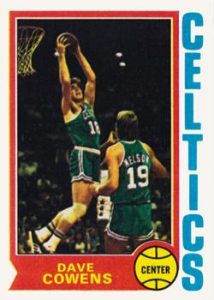 Another notable card of Dave Cowens is his 1974 Topps edition.

The 1974 Topps Dave Cowens #155 is a part of the 1974 Topps basketball set, which is one of the first sets with colorful quality action photos appearing on the cards. For that era, it was significant because photography was developing and Topps was able to utilize it that year to design a beautiful basketball card.

Cowens is pictured here in flight, wearing his green Celtics uniform, and grabbing the ball above the rim. The action shot is placed in a red frame, with the border getting thicker at the bottom to include player’s name in yellow capital letters and the position in a yellow basketball shape. The team’s name is seen written vertically on the right side of the cad, in blue letters.

As mentioned, the 1974 Topps basketball set is a significant edition because of the design shift, but it also included some significant cards, so it’s very demanded among the hobby people. The set boasts rookie cards of Bill Walton, Doug Collins and George Gervin, plus the beautiful pieces of Julius Erving, Wilt Chamberlain and Pete Maravich to name a few. 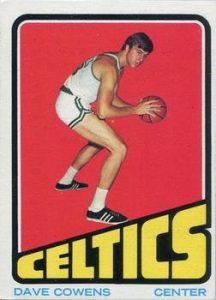 Perhaps one of the most notable Dave Cowens cards other than his rookies, the 1972 Topps Dave Cowens #7 commands attention by its staple design, surely recognizable in the hobby, and its inclusion in the 1972 Topps basketball set which also featured the legendary player Julius Erving’s rookie card, and the cards of such greats as Phil Jackson (also RC), Wilt Chamberlain and Pete Maravich.

Design-wise, it was not the era of full action shots yet, but with this, set Topps has still managed to revolutionize how a sports card would look . The esthetically pleasing one-color background and the contrasting team name letters in a diagonally raising font on the bottom is certainly a breakthrough solution for the vintage early 70’s.

For Dave Cowens #7, the background is red, and the Celtics team name is written in yellow. Player’s name and position are written on the very bottom of the card, in smaller blue letters.

The 1972 Topps Dave Cowens #7 is definitely one of the best Dave Cowens cards out there. Yes, it’s popular, but at the same time very affordable. If you’re not grabbing one of his rookie items mentioned above, then this should be your next go-to option.