Reggie Miller is regarded as one of the greatest shooters in the history of the NBA. His clutch performances and sharp shooting abilities have made him a fan favorite for decades, and his memorable moments on the court have cemented his place in basketball lore.

As a result, Reggie Miller cards have become highly sought after by collectors and fans alike. Whether you’re a seasoned collector looking to add to your collection or a newcomer to the world of basketball cards, it’s essential to know which Reggie Miller cards are the most valuable and coveted.

So, without further ado, let’s take a look at the top Reggie Miller cards that every collector should aim to get their hands on. 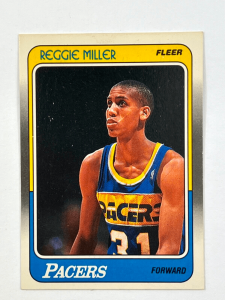 The card shown is the most iconic Reggie Miller card of all time. The picture features a young Reggie in his Indiana Pacers uniform. This card is a must-have for any collector. The card is common, but it’s still highly coveted due to its historical significance as Reggie’s rookie card. In terms of value, this card fetches a few hundred dollars in top condition

This card is another classic Reggie Miller collectible. It features a close-up image of Reggie in his All-Star uniform and is considered one of the more visually appealing Reggie Miller cards out there. The card is not too hard to find, but it can still command a reasonable price due to its popularity. Expect to pay a few hundred dollars for a high-grade version of this card. 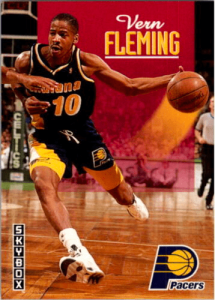 This card is another great option for collectors looking to add a Reggie Miller card to their collection. It features a bold image of Reggie in his Pacers uniform, with a vibrant blue and red color scheme. The card is not particularly rare, but it’s still a solid choice for collectors looking for a high-quality Reggie Miller card. Prices for this card hover around the $100 mark. 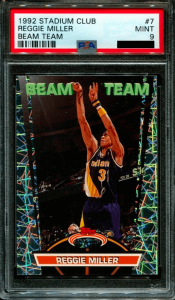 Talking about Reggie Miller’s best cards, it is imperative to mention this “beam team” card from the 1992 Stadium Club set. “Beam Team” is one of the most popular inserts coming from the collections of the late 1990s. Over time “Beam team” became synonymous with “Stadium club.” The very season in which this insert is introduced, 1992-1993 features Reggie Miller whose photo is intent on making a shot. The holography and card design is inspired by a Laser Show and is one of the most iconic designs of the era. At the same time the product was released Topps advertised a six-minute laser show that debuted first at the all-star game and later around America to further the promotion of the NBA. The checklist in this insert, in addition to Reggie Miller, includes other important NBA-related names. We can mention Michael Jordan and Shaquille O’Neal (who was a rookie that year). In total, the checklist had 21 cards for 21 players. This insert was very popular at the time and also particularly rare, which is why even today, to add one of these cards to your collection you have to consider a fair amount of money to spend. 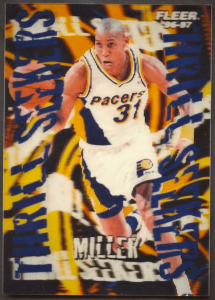 As we continue to talk about Reggie Miller’s best cards and also Inserts, it is worth talking about 1996 Fleer Reggie Miller #11 – Thrill Seeker. A fairly rare card, but more importantly, a very unusual one because of its design that used unusual printing and manufacturing technology . This insert Randomly inserted into second series hobby packs only at a rate of one in 240, it is a 15-card set that uses Lenticular technology and showcases NBA players who know how to “thrill” NBA fans. The back of the card tells the story of when Reggie Miller in the final minutes of a game against the Knicks managed to turn a now certain defeat into an incredible victory that remains in the annals of the sport. 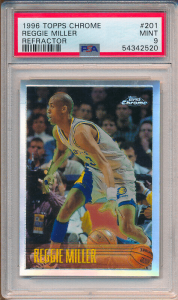 This is a more modern Reggie Miller card, but it’s still an excellent choice for collectors. It features a clean, glossy image of Reggie in action and is considered one of the better-looking cards in the Topps Chrome series. The card is not particularly rare, but it’s still a solid choice for collectors looking for a high-quality Reggie Miller card. Prices for this card tend to hover around the $100 mark. 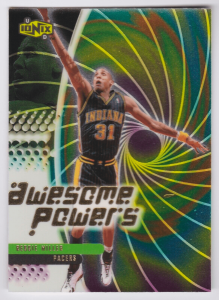 This is a more recent Reggie Miller card, but it’s still an excellent choice for collectors. It features a bold, futuristic design and a high-quality image of Reggie in action. The card is not particularly rare, but it’s still a solid choice for collectors looking for a modern Reggie Miller card. Prices for this card tend to hover around the $50 mark. 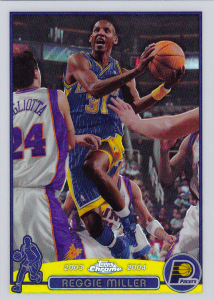 This Reggie Miller card from the early 2000s is even more modern, and comes from sets most beloved by collectors. In fact, we are talking about Topps Chrome. from the 2003-2004 season. Like some of the earlier cards mentioned, this one, is not particularly rare, but the shot of Miller in action as he attacks the basket, in combination with the blue and yellow design, make it an absolute must-have for any fan. There is a refractor version of this card, which is a little bit more expensive and rare, but further enhances the design and its beauty. On the back of this card is a photo of Miller and a number of statistics, including a “curiosity” at the bottom related to the number of triples made during the season.

There are other Reggie Miller papers worth mentioning within this article, despite the fact that they may be rarer or more expensive or hard to find. 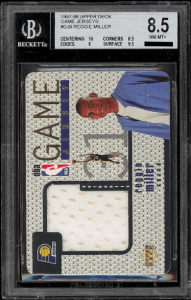 This Reggie Miller card from the 1997 Upper Deck Game Jersey set and features an image of Reggie Miller in casual dress, without his NBA uniform. This is precisely why it is so distinctive. Inside this card the piece of memorabilia comes from Miller’s own match-worn jersey. The complete subset from which this card comes consists of 22 total cards, and we can name other notable players of the caliber of Kevin Garnet and Charles Barkley among those that can be found. 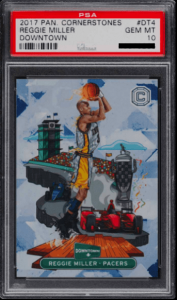 This card is the most modern on the list and, from a purely aesthetic standpoint one of my favorites by Reggie Miller. Downtown is an insert contained within the 2017 Panini Cornerstones set containing 20 total cards. A card with a modern design and full of details. In fact we can notice in the card design Reggie Miller is intent on shooting with the flaming ball ready to burn the net. Other details we can notice are the shape of the clouds, typical of Indiana, and the Indianapolis Five Hundred Miles reference. Unfortunately, this card is not very affordable, but it absolutely cannot be missed if you are a true Reggie Miller collector.