The 90-foot passes, the reverse dunks, the assists, the touch passes – that’s all that Nikola Jokic can do.

As a center, Jokic has one of the most diverse skill sets in NBA history. Many people see “the Joker” as the best offensive center in history.

In 2014, Jokic was drafted by the Nuggets as a second-round pick, so it’s fair to say that not many people would have predicted such a stellar career for the Serb.

He was so overlooked initially that he didn’t even appear in some 2014 packs; some of his most desired rookie cards come from 2015 packs.

In this article, we’ll take a look at the best Nikola Jokic rookie cards that you can get for your money.

Let’s see which Nikola Jokic rookie cards are worth getting based on your preferences.

Let’s start with the most common rookie cards, and you simply can’t ignore the Panini Prizm rookie card if you’re looking for a good, entry-level Nikola Jokic rookie card.

This is one of those cards we’ve talked about earlier that came out in 2015. As we’ve mentioned, Jokic was drafted in 2014 but his Panini Prizm rookie card came out a year later, which just goes to show how underrated the Serb was.

The Panini Prizm card is perhaps the best choice for the average collector, or even if you’re an entry-level collector.

It should be easily available, and there should also be many cards of this type with a good grade. At the same time, it should not blow too big of a hole in your pocket, which is great if you’re on a budget.

As always, you’ll have a great deal of variety with the Prizm. There are 19 different parallels that you can go for, so it will depend on what budget you have and how much you are prepared to spend. But if you’re looking for variety, Panini Prizm is the one.

And boy, are there some flashy and colorful parallels to choose from. Like this Flash Prizm, for example: 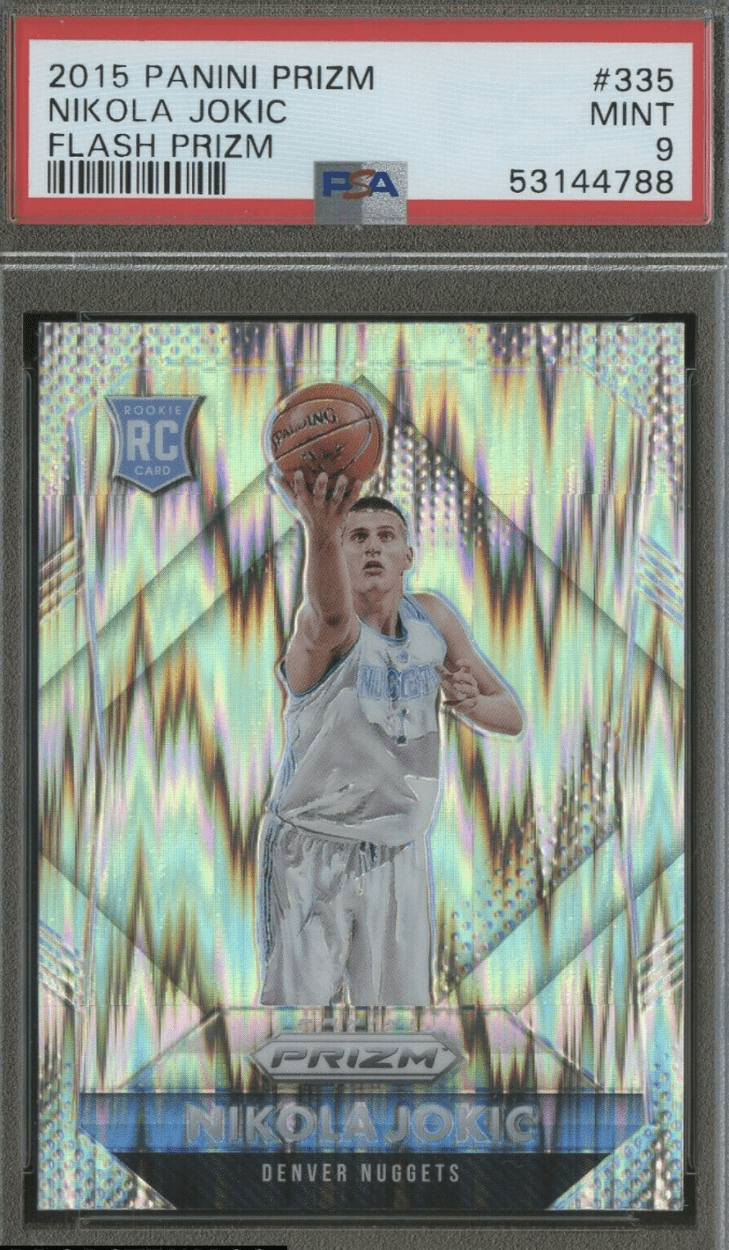 This might be one of the more common Panini Prizm parallels, but it’s still unique and beautiful in its way. You’ll find many rarer parallels. The rarest include Prizms Mojo (25), Prizms Gold (10), and Prizms Black (1). 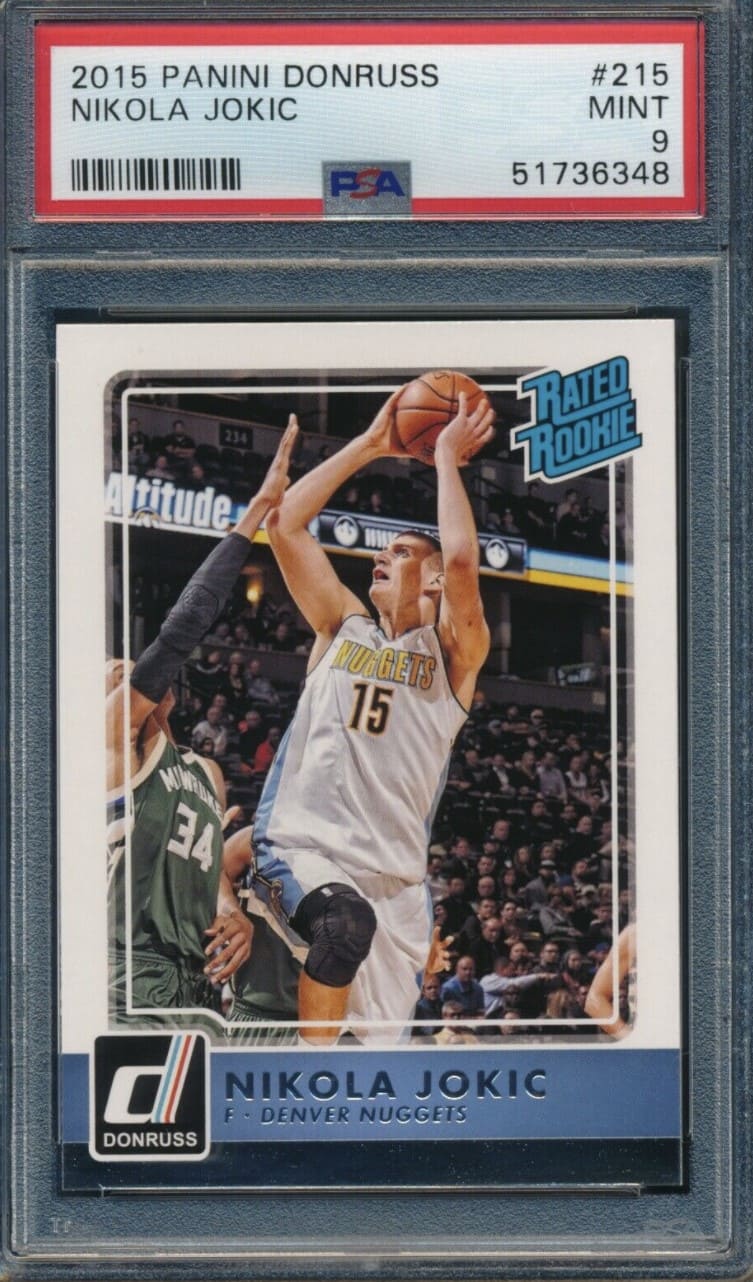 The 2015 Donruss Rated Rookie is one of the hottest and most desired rookie cards of Nikola Jokic.

Many people love this brand for its live court shots, which make the card feel alive. If you like this type of design, then you should not hesitate to buy this one.

The good news here is that it should be easily available. The higher graded cards of this type can cost thousands, but if you don’t necessarily want the best and the shiniest, then you might be able to get one for much less.

Donruss is the standard choice if you’re an average collector; now, it all depends on what style you prefer on your card. If you want to have a bit more variety, then Panini Prizms might be the better option.

But if you prefer the live-action style of the Donruss card, you will not go wrong with this one, either.

Even with the Donruss card, there are some parallels to choose from. Some of them include Holo, Inspirations, Status, Press Proofs Gold, and Press Proofs Black. 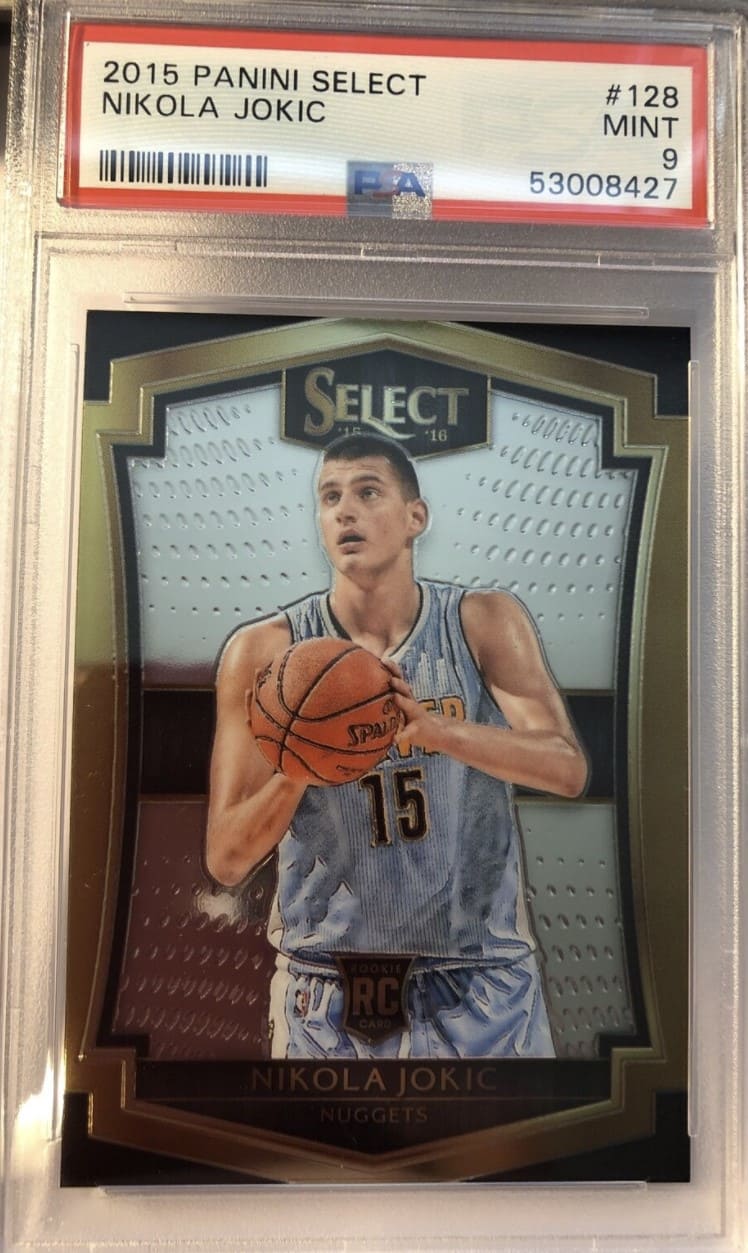 Now, if you’re super tight with your budget and wouldn’t like to overspend, then the Panini Select rookie card of Nikola Jokic certainly has a lot to offer.

It might not be the flashiest card that will stand out all the time, but it’s a worthy card that you should consider if you’re on a budget.

Panini Select is quite a reliable brand when it comes to rookie cards, it’s just that it is not seen as the most premium option. It carries its typical design with the 2015 Jokic card as well, with the cut image of the player in the middle.

You should be able to pick this card up for relatively cheap – at least when it comes to the base card.

Though, some parallels can cost thousands – for example, the Black-White Gold shimmer parallel, which only has one card to its name. There are also many other parallels you can choose from that are not as expensive.

Like your cards darker? Then the Panini Noir card option for Nikola Jokic rookie cards will be the right option for you.

There are two main choices that you can go for base cards: #95, and #195. The #95 tends to be a bit more common out there nowadays, although they both have the same print run of 99 copies.

Now, if you prefer the black-and-white style, then you will probably like the #95 more.

But if you like to have some colors on your card, then the #195 is nice, too.

Both should be plentiful out there no matter which option you choose, though. These can cost several hundred dollars and potentially more if they are well preserved. 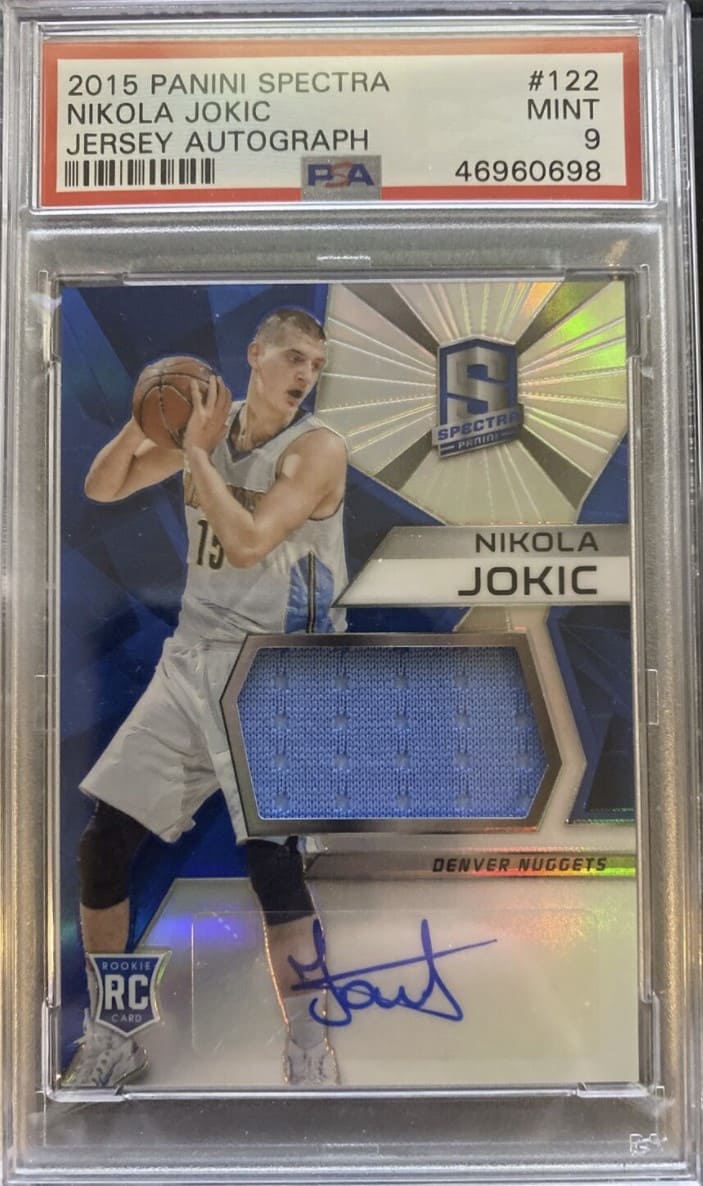 If you’re looking for a mid-level card with some premium features, then the Panini Spectra rookie card is the right option for you.

It has an autograph and a jersey patch, which are both features that you’ll find on cards that are worth much, much more than this one.

For this card, it’s the brand reputation that lets it down slightly. Panini Spectra is not the most prestigious card brand, and even though it offers some of the same features as the premium cards, it will not cost nearly as much.

This card is a great option if you prefer to own signed cards with some additional features, and you don’t want to overspend. 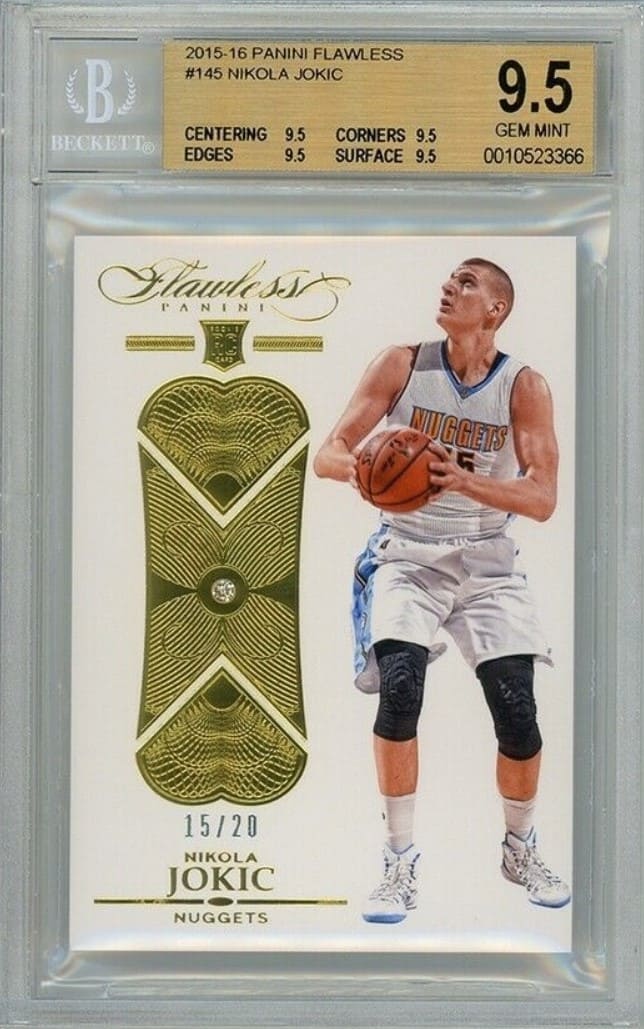 The Panini Flawless Nikola Jokic rookie card is one of the most prestigious and premium rookie cards that you’ll find out there.

The major reason for that is the rarity of the card. The base card that has a diamond on the card only has 20 copies to its name, but there are also different parallels to choose from, which are even rarer.

You can choose from four different parallels here:

Each of these parallels has a piece of a gem on the card.

This is one of the reasons why this card will cost you several thousand dollars, if not a five-figure amount.

The other reason is the rarity. It will be very hard to find a card of this type out there since the print runs for these cards and their parallels are quite short. You can go for this card if you have several thousand dollars to spend and are not afraid to dive deep into the Nikola Jokic rookie card market. 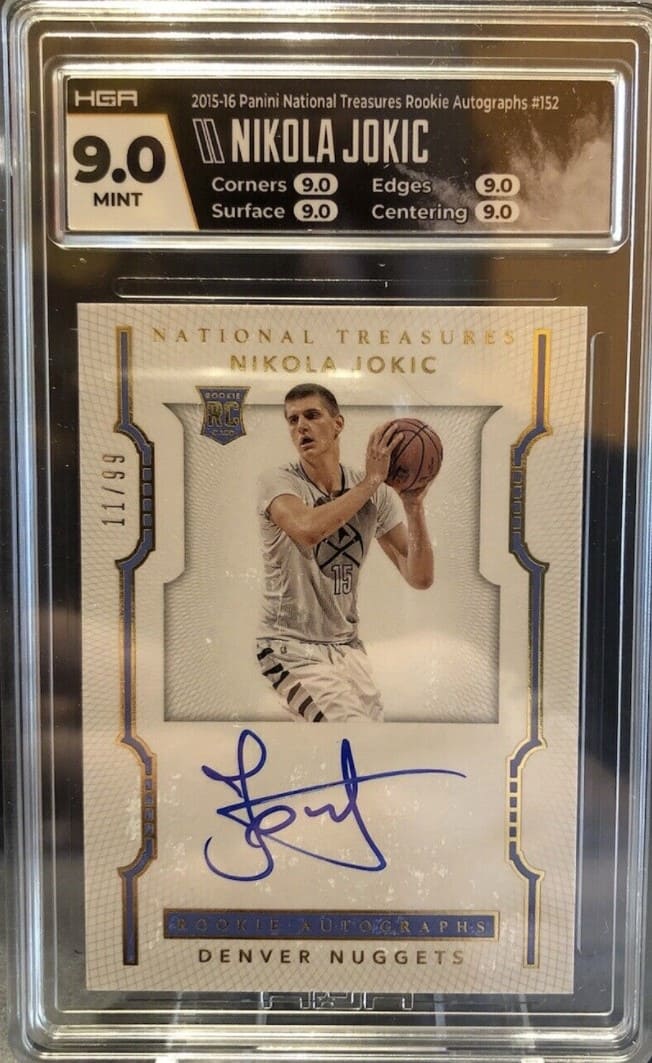 This list wouldn’t be complete without a National Treasures card somewhere included. It is, as is usually the case, one of the more expensive rookie cards out there. You’ll be able to get this one for several thousand dollars.

National Treasures has a reputation for being a premium card brand. Everything from the elegant design to the included autograph tells you that it’s an expensive card.

The base card is also limited to 99 copies, which means that even finding the base card might be a bit of a challenge.

That said, the parallels are even tougher to find.

If you want to own this card, be prepared to spend a big amount of money. You are looking at at least several thousand dollars, if not a five-figure amount. 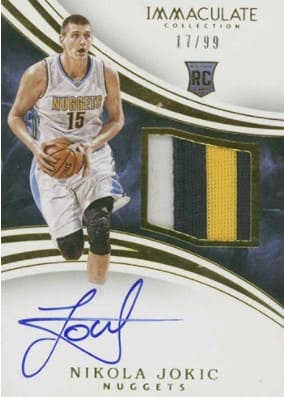 Last but certainly not least is the Immaculate Collection Nikola Jokic rookie card.

Now, this card is somewhat special.

It has everything you’d come to expect from a premium card – the autograph, the jersey patch, and a limited print run of 99 copies.

But this Immaculate card is also a bit different from the rest of the premium cards; it doesn’t have parallels, meaning that the base card is the main prize. This means that you’ll have quite a lot of competition for buying a card like that, and you’ll also need to have your cash ready.

Depending on the condition of the card, it will sell for a few thousand dollars and maybe even more, if the card is well preserved and in great shape. In any case, this is one for the premium collectors out there.