In 2015, the Edmonton Oilers picked Connor McDavid as the overall first option in the draft, which made a lot of people curious about his rookie cards – as is the case with any first pick in any draft.

But McDavid’s cards were a bit different – Upper Deck holds the licenses for NHL cards, but some early cards gathered a lot of popularity as they were released before the official cards.

McDavid’s ability to launch the puck at the highest possible speeds makes him a formidable opponent in any game, and arguably one of the best players in the league.

With that in mind, let’s take a look at the top Connor McDavid rookie card options.

These are the best Connor McDavid rookie cards to choose from. 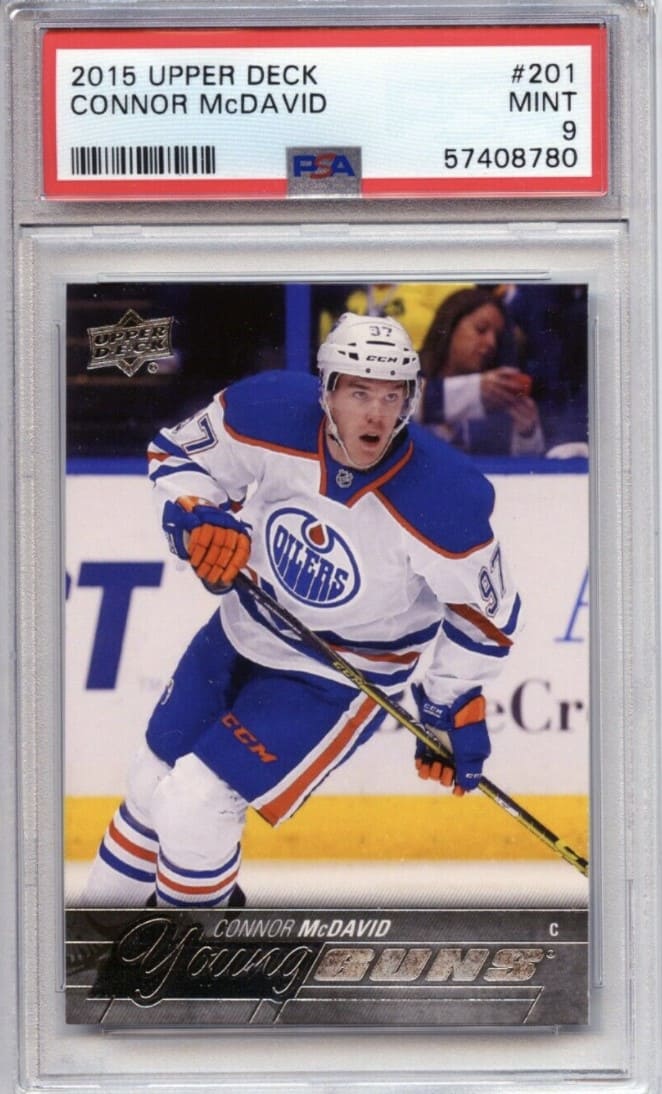 This is the quintessential Connor McDavid rookie card – Upper Deck’s version of this player’s rookie card.

It’s the one card that the majority of collectors know about since it’s one of the most widely available cards on the market.

While it may not be the most expensive or most valuable Connor McDavid rookie card, it is certainly one of the most, if not the most, widely owned rookie cards of this player.

Initially, there was a lot of interest for Connor McDavid’s rookie cards because of his first pick status, so Upper Deck printed more of these cards out to make sure that the demand for the card is covered.

This resulted in a higher print run – which did eventually lower the price for the card, but many people got lucky enough to own it.

It’s a good card to go for if you’re looking for a relatively affordable card with a lot of potential going forward. 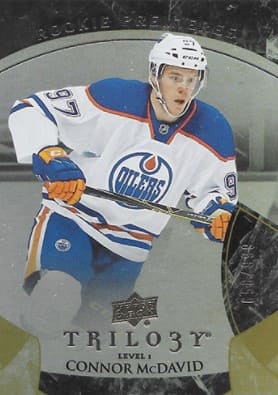 Let’s continue with one of the more affordable cards on this list, which is the Upper Deck Trilogy card from 2015.

This card is well-known with hockey card collectors, particularly with those that are looking for Connor McDavid cards and are on a budget. This is a great option if you’re one of those types of collectors.

The good thing about this card is that it is serial numbered, which means that it’s going to be quite an appealing option if you want something that will feel like it’s your very own.

However, with 999 copies of this card, this is not a particularly rare one, so you might not reap huge rewards down the line if you’re looking for an investment. Rather, this might be one of the cards to add to your collection. 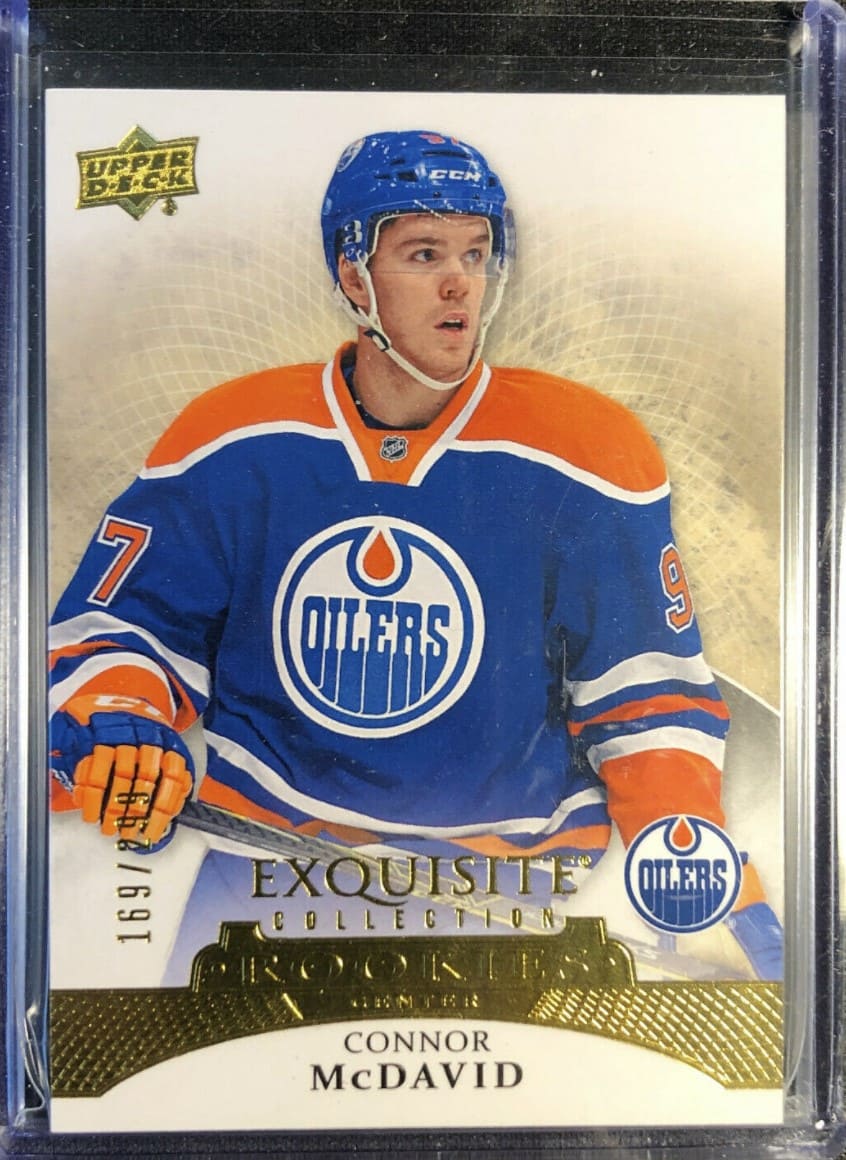 The Exquisite Collection cards are all about elegance and class, and this Connor McDavid rookie card is no different.

It is definitely not as busy as some other, more expensive cards, but if that’s what you prefer, then this is going to be a great option.

This card is also a great option if you don’t have several thousand to spend, and if you’re looking for something that won’t cost you an arm and a leg. It’s still a Connor McDavid card though, so it won’t come crazy cheap either.

It has a relatively big print run and together with the fact that it doesn’t have an autograph or a jersey patch means that this card is going to be slightly cheaper than its larger and more expensive brother, which is the famous 2015 Upper Deck Ice (more on that later). 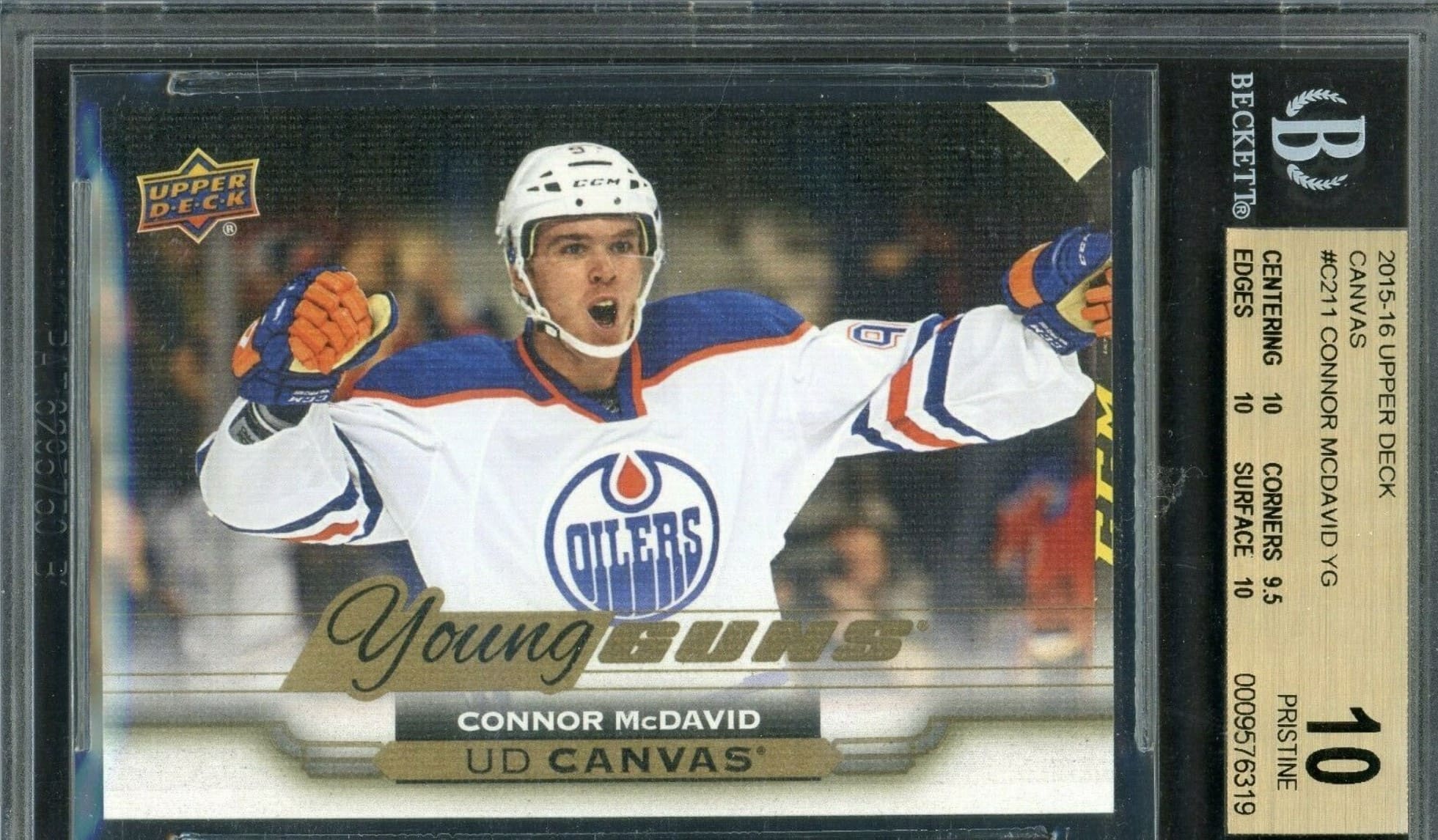 Here’s another great option if you’re looking for a nice Upper Deck card that won’t be hard to get, and won’t cost you too much.

It’s a highly popular rookie card of this player because it’s widely available, although it doesn’t have any of the premium features you’ll see with cards later on this list.

It’s still a smooth, nice card with a photo of celebrating Connor McDavid that you’ll love if you’re looking for a slightly more affordable option. There are many listings, so you might find a sensible deal if you know where to look, and the prices can vary quite significantly with many of these cards. 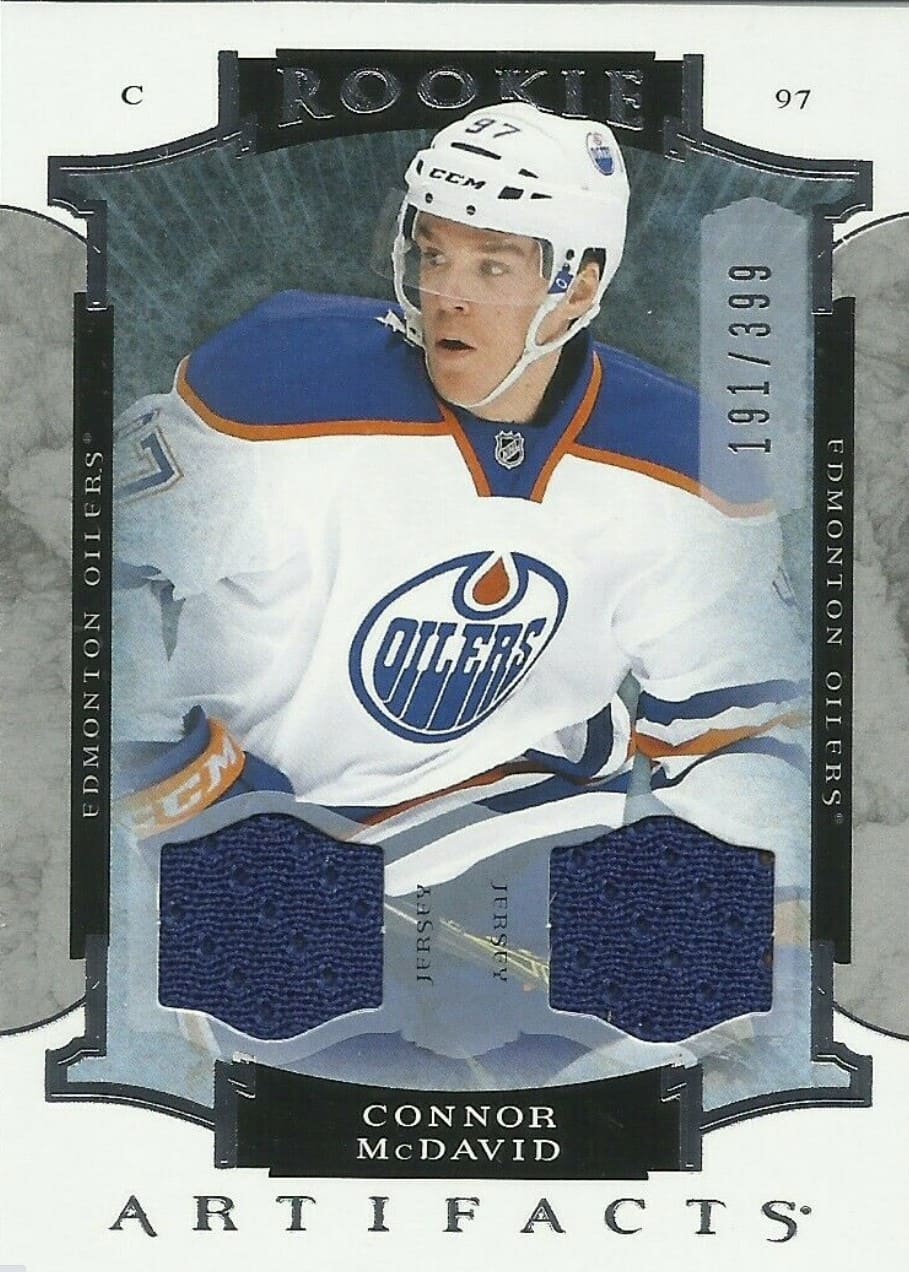 We’re diving a bit deeper into cards that have additional features, and the Artifacts card by UD is the next in the line. It has a patch of jersey on each side of the card, which is a nice touch to an overall basic design.

This card was a part of a redemption pack by UD and it has 899 copies to its name, which means it’s not the rarest of the cards on this list, but can still command a respectable price.

This is a decent card if you’re looking for a card that has a jersey on it but it’s still affordable enough even if you’re not looking to spend a crazy amount of a Connor McDavid rookie card. 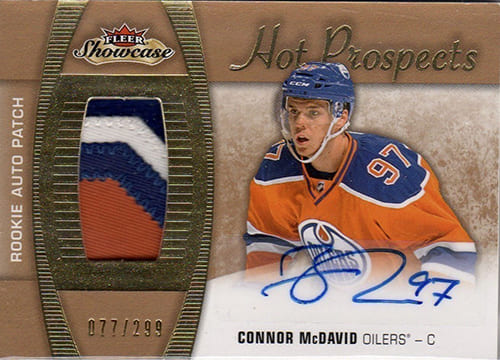 This Fleer Showcase Connor McDavid rookie card is first on the list for many hockey card collectors – and for various reasons.

Firstly, you should expect this card to cost several thousand dollars because it’s arguably the most premium card for Connor McDavid. That will be the case both for ungraded and graded cards, and there are also some varieties to pick from (Red Glow, Gold, just to name a couple).

Secondly, there’s that typical premium design with the on-card autograph and the jersey patch, which makes this one that extra bit special.

And we also must not forget about the fact that there are only 299 copies of this particular card, which makes it even more desirable. You’ll get a serial number on your card, which will make it feel like it’s truly yours.

Overall, the Fleer Showcase presents one of the best Connor McDavid rookie card options provided you’ve got the money to go for it. 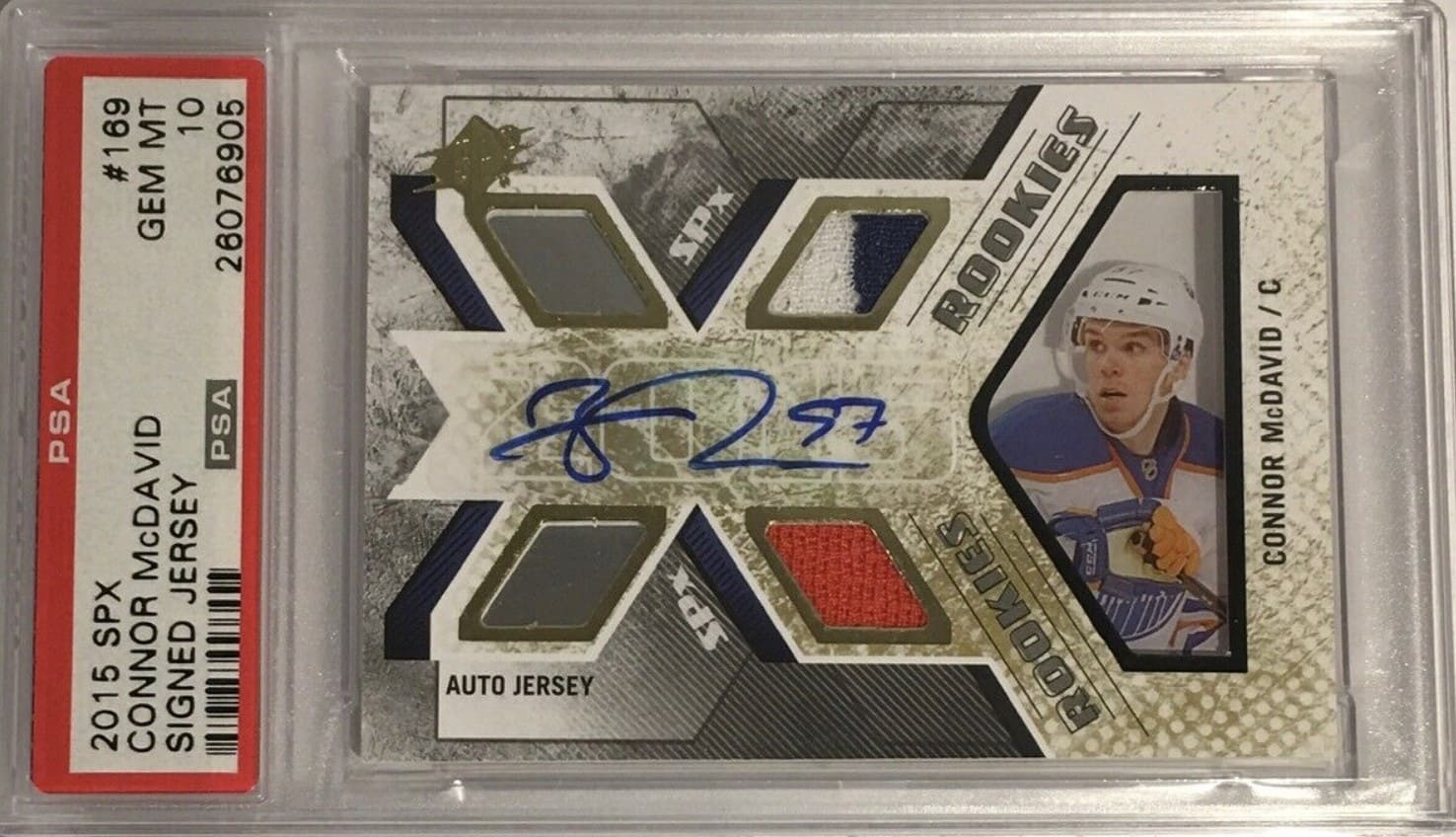 The 2015 SPx has a design that you’d normally expect from SPx cards. It’s still a busy card, albeit there have been some changes to the card compared to the last few years.

There’s still the massive X in the middle of the card, with the jersey dispatched across the four corners of the X. In the middle, there’s an on-card autograph and the image of Connor McDavid.

SPx is a popular brand for hockey cards, but also for rookie cards of other types. And despite the fact that the print run for this card was relatively large, these cards can cost several thousand dollars.

Consider it if you’re looking for a card with a lot of history and a premium type of design, and if you’re prepared to spend a bit more.

There are many options when it comes to Upper Deck cards, but the Premier edition seen right here is one of the better ones.

Ice hockey card collectors often look for cards that offer autographs, and that is why the Premier card by Upper Deck is always going to be a popular option. It combines the overall design with the card and the autograph very nicely, as it fits the overall design perfectly.

Plus, there’s that jersey patch in the middle of the card, which makes it an attractive option for premium card collectors especially.

Now, there are 199 of these cards officially out there, although it’s not quite clear how many of these are selling. You might struggle a bit to find one in better conditions that comes still at an affordable price. Regardless, you’re looking at a few thousand dollars at least here, and potentially a five-figure sum if the card is graded well. 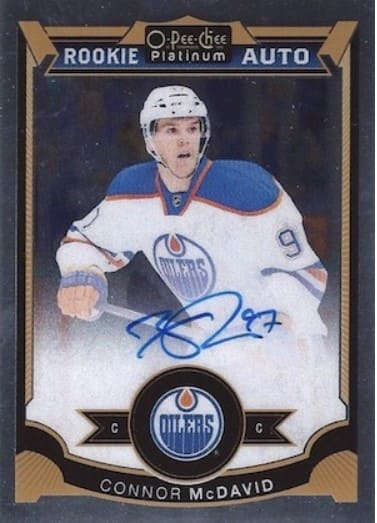 If you’ve got a knack for collecting O-Pee-Chee hockey cards, then you might be a bit disappointed by the fact that Connor McDavid wasn’t included in the initially released pack by the card company.

The good news is, however, that this Canadian center is included in many subsequent O-Pee-Chee packs, and the Platinum card seen right here is one of the best options you might have at your disposal.

Now, it’s highly likely that you might struggle to find this one listed on the marketplace because it’s not exactly common.

But there are many different parallels and color variants of this card nonetheless, which might be an appealing option to go for. Plus, there’s that on-card autograph that so many collectors want, making it an even more attractive option for many. 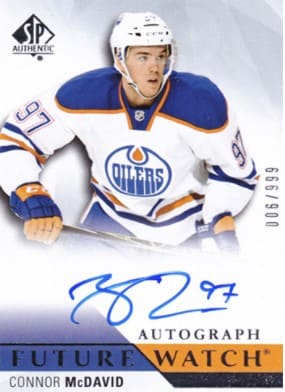 SP Authentic is one of the biggest and most popular card brands in hockey. No matter who the player is or what the print run of the card is, it’s always going to end up among the more expensive cards.

And this time, it’s no different.

If you look at the print run for this card (999 copies), you’ll see that it’s by no means the shortest print run. However, it still ends up being one of the most expensive Connor McDavid rookie cards on this list.

It’s really a bit of a phenomenon, but considering the history and the pedigree of the SP Authentic company, it doesn’t come as a massive surprise.

If you want to own this card, you’re going to have to shell out the big bucks. 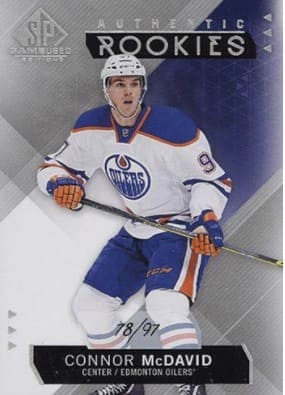 SP Game Used is one of the rarest cards on this list, with just 97 copies to its name. Throughout the years, the print runs for this brand have become shorter and shorter, which has resulted in higher prices.

Many people are still interested in these cards, though, but finding one can prove to be a challenge.

If you look at the card, it doesn’t have many standout features like some other premium cards do, like a jersey patch or even an autograph.

Why does it rank so high in terms of value?

It’s mainly to do with the fact that so few of these were produced – and coupled with a high level of popularity for this brand, and you get an expensive option. 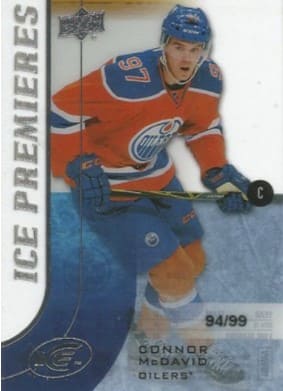 You’re looking at one of the most expensive hockey cards of the 2010s. This beaut can cost well into five figures.

What makes it so expensive, you might be thinking?

Right off the bat, you might not notice anything special about it. It doesn’t have an autograph, nor does it have a jersey patch. Where’s the catch?

With this card, it’s all about the brand name – UD Ice is one of the most iconic and historic brand names for hockey cards. Plus, it only has 99 copies and the acetate finish makes it even more desirable.

This card is right up there with the most expensive Connor McDavid cards, and it’s comparable to what an SP Game Used card might cost. 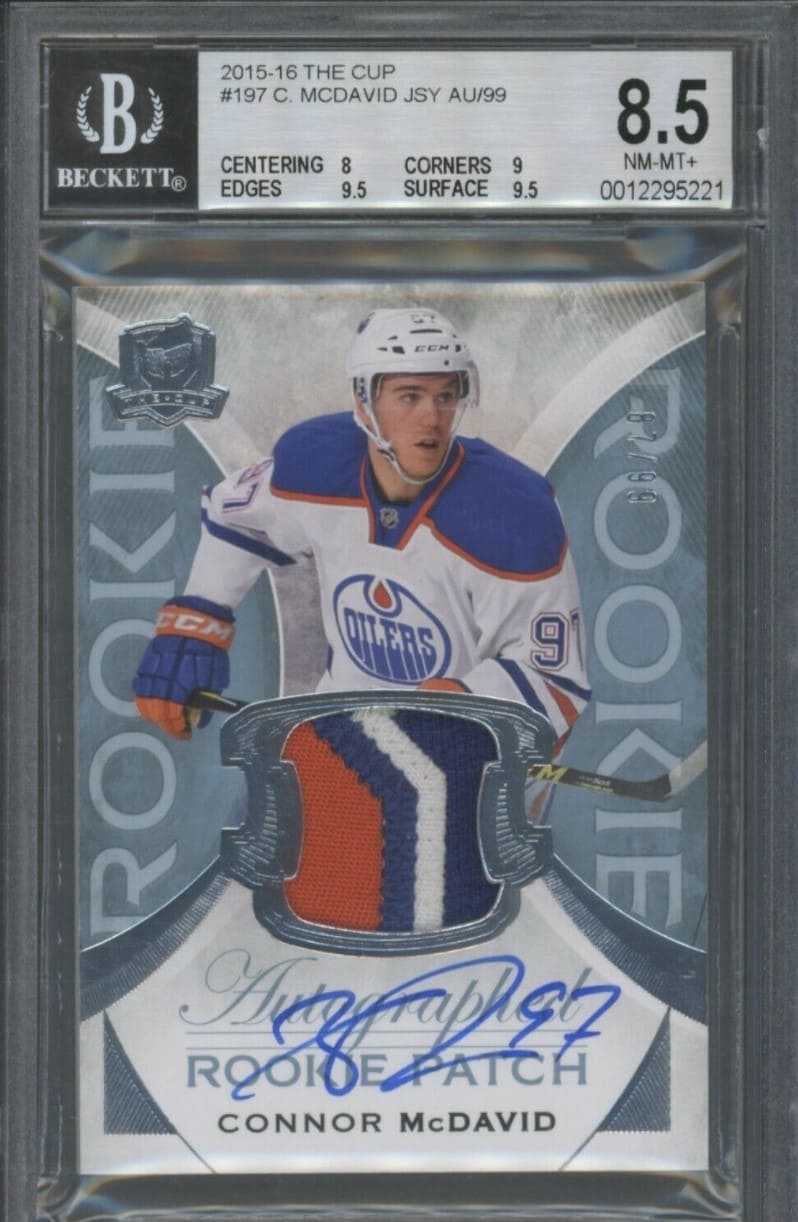 Here it is, the king of them all – 2015 The Cup Connor McDavid rookie card.

It’s by far the most expensive card of this player, and for several reasons:

All of these factors combined, and you get prices well into five figures and potentially into six figures for top graded cards.

This is it, the prestige card, the best of the best. If you want nothing but the best, this might be it. But this kind of prestige won’t come cheap, either.

There are many Connor McDavid rookie cards out there, but none are as famous or as popular as The Cup card by Upper Deck.