Randy Moss was a perennial Pro Bowl player at the wide receiver position. Not only was he a great receiver, but Moss could be a great return man and even served as a punt returner.

The Randy Moss rookie cards are some of the most popular rookie cards to collect because of who he would later become in his career.

Moss was drafted in the first round as the 22nd overall pick in 1998. He will go down as one of the most highly touted and most highly paid rookies ever in the NFL.

The 1998 rookie class had some great rookies and Moss is certainly one of them. His rookie cards will continue to be sought after by collectors for years to come because of his success in later years.

If you’re interested in collecting Randy Moss rookie cards, this article should give you an idea of where to start looking.

If you’re not sure where to start looking for Randy Moss rookie cards, then start with the base and most common cards.

If you have a larger budget, you can also consider some of the more premium options, which we’ll go through later on in this article. 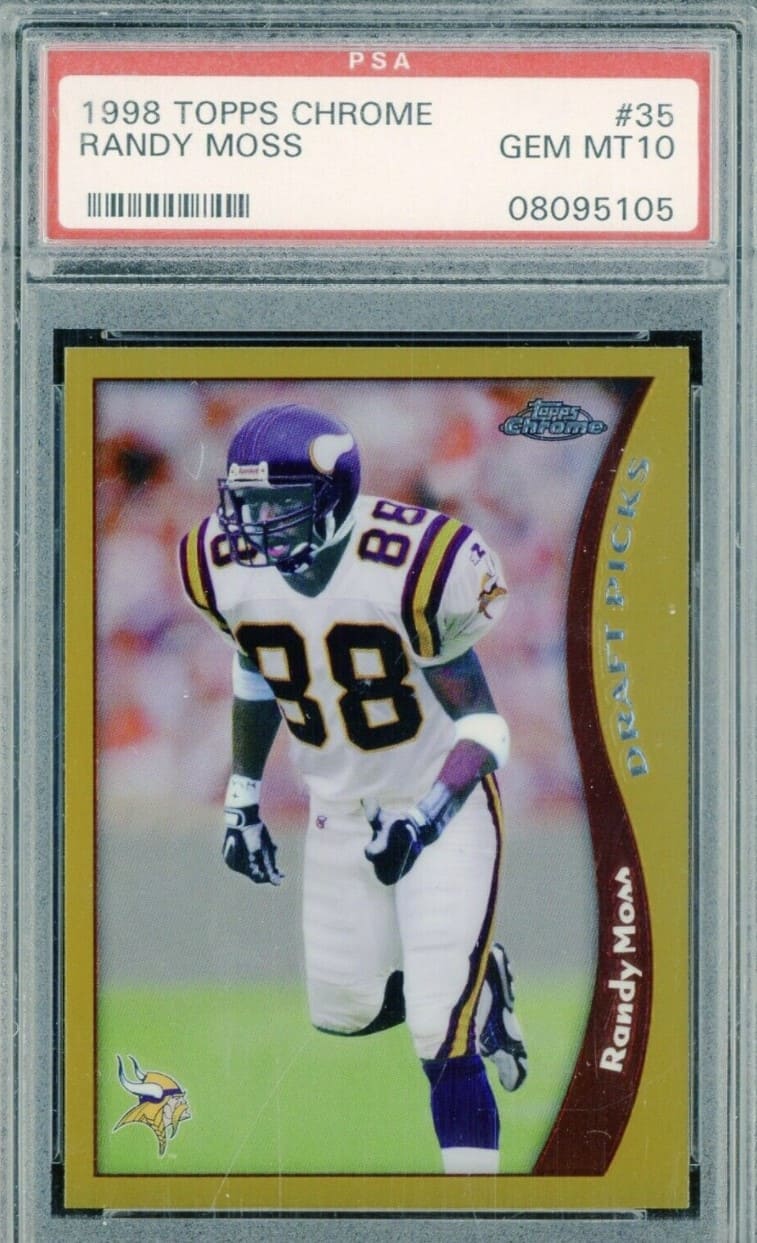 For baseball cards, Topps Chrome is the biggest seller in the hobby. And it’s no surprise since they produce top-quality cards, which last well due to foil printing.

The Topps Chrome Randy Moss rookie cards from 1998 have been some of the most sought-after cards in the hobby. But despite that, you will find this card at very modest prices, which is mainly thanks to the larger print runs.

If you want something even more unique and perhaps a bit more premium-feeling, you can go for the parallels of this card.

The Topps Chrome parallels are extremely hard to find, but very popular among collectors.

If you want something even more unique and perhaps a bit more premium-feeling, you can go for the parallels of this card. The Topps Chrome parallels are a bit harder to find but very popular among collectors. 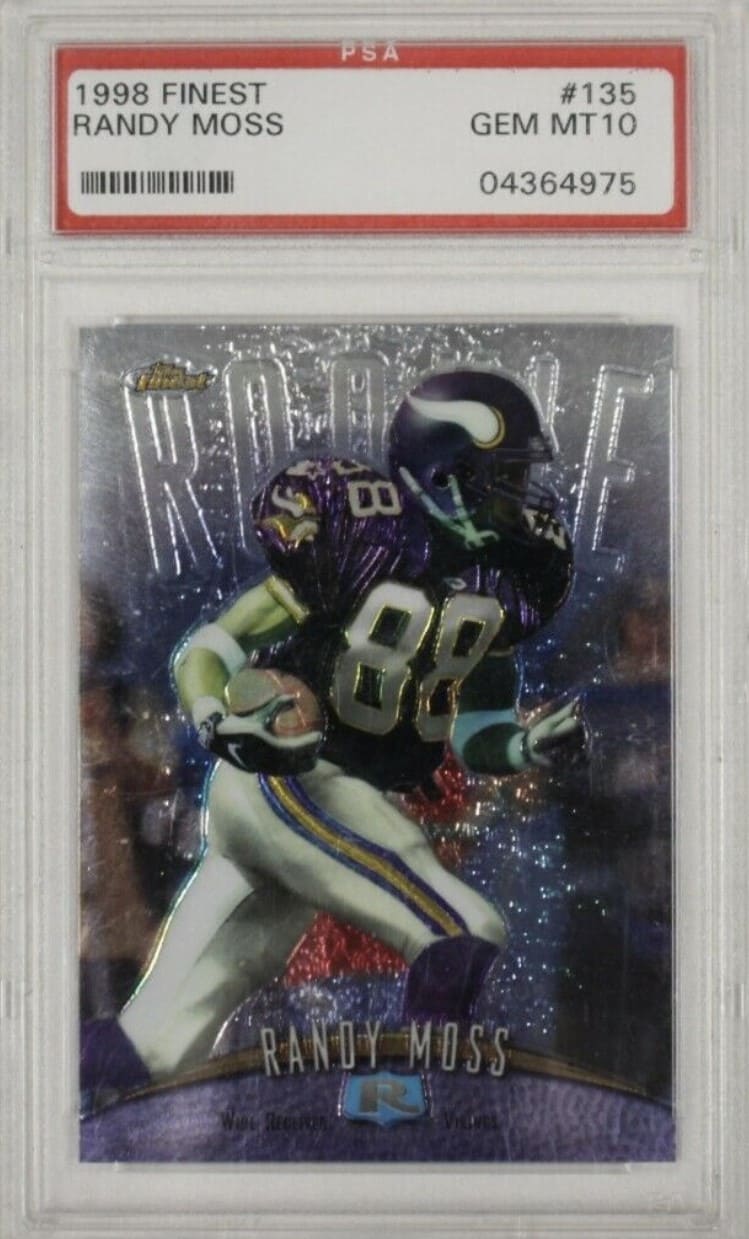 Next up is the 1998 Finest Randy Moss rookie card, which is yet another great option for you if you’re looking for an investment that’s not going to burn a hole in your pocket.

The finest card is well-known for its shiny appearance, which for 1998, was one of the most popular features to have on cards.

There are also a few parallels that you can choose from, although they are not as common to find, so you might struggle to find them at sensible prices.

In addition, there’s also a lot of cards of this type with coating, which tend to cost just a bit more since these cards are better protected and as a result, they tend to be a bit better preserved as well. 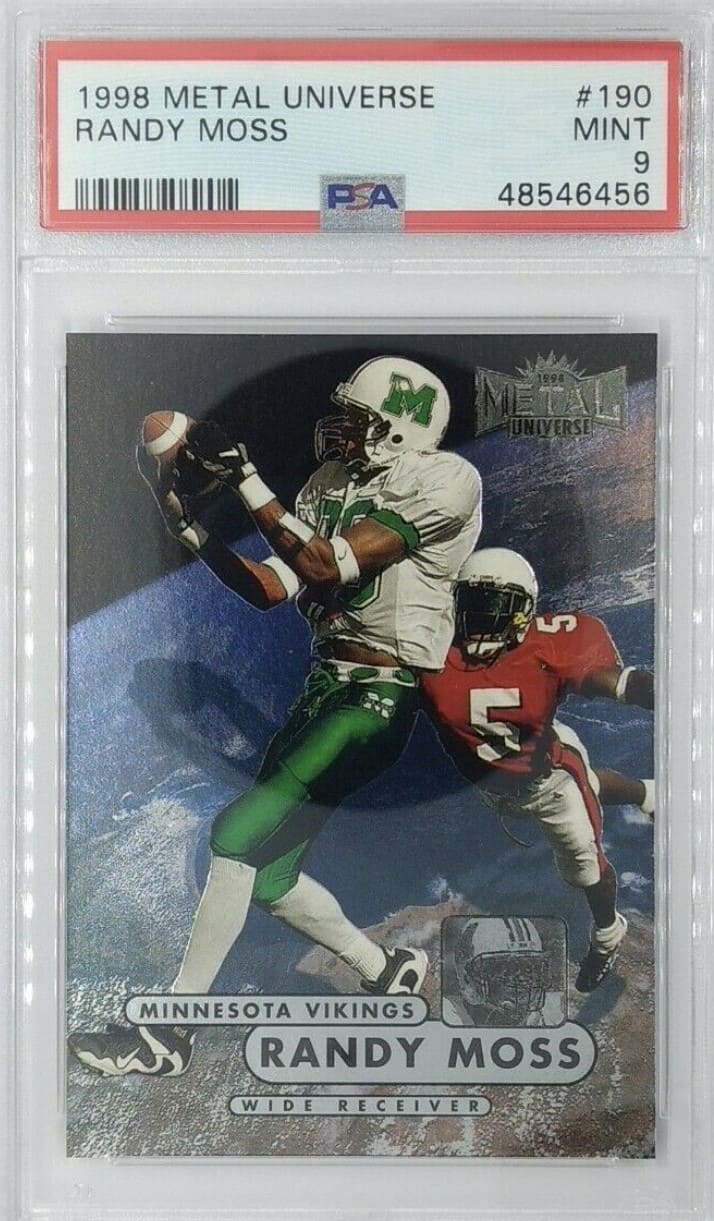 This card still belongs to the budget category, even though the best-graded cards of this type can still cost you hundreds of dollars.

It’s also an interesting card to look at.

It has the Earth as the background with Randy Moss receiving the pass from a teammate while another player from the opposing team is trying to intercept the pass. And that was a sight that you would see commonly during Randy Moss’ playing career.

Get this card if you’re looking for a good, budget alternative to some other, more expensive cards we’ll mention later on in this article. 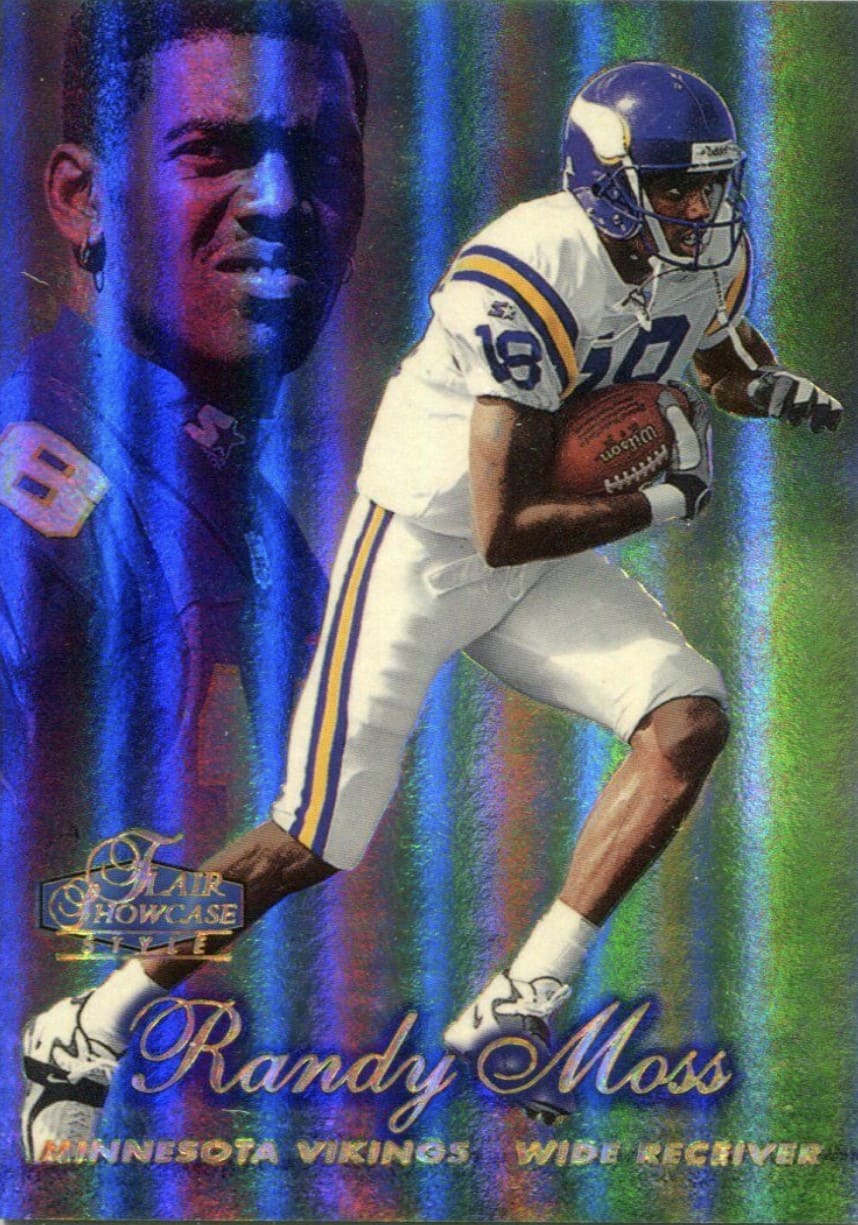 Now, when it comes to the Flair Showcase Randy Moss rookie cards, you’re spoilt for choice.

This card brand is a great option for you if you’re a bit of a perfectionist, and you want to collect complete sets of cards.

There are four base cards of this type. Each card is different and unique, although they all come with a dual image. Collectors preferred to collect these cards because it was more challenging to collect all of the cards in the set.

There are also Legacy parallels for each of the cards, which created an additional layer of interest for collectors. In general, the base cards tend to go for several hundred dollars, while they can be even more expensive when it comes to parallels.

Skybox sets are one of the top-selling card products in the hobby, with collectors paying more for them.

The “E-X2001” is a bit harder to find than the Topps Chrome cards. The base card, the #55, is a bit easier available than some of its parallels, though, such as the Essentials Credentials Future card, or the Stardate parallel which you can see below. 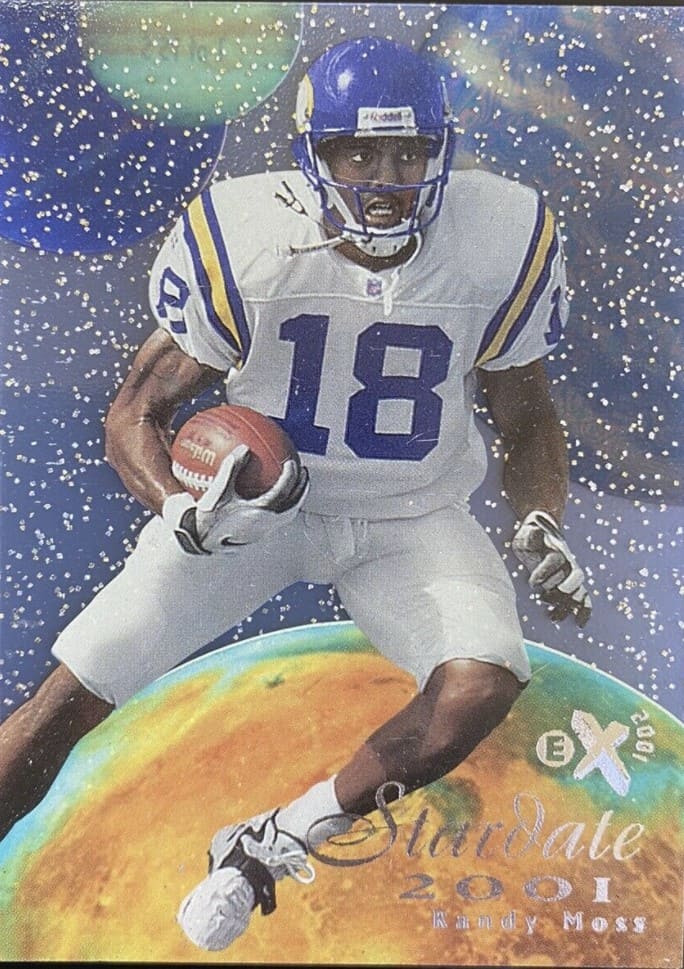 The base card of this type is going to cost you hundreds, if not even more, in the best conditions possible.

But if you’re looking for a slightly bigger investment, then you must consider the two parallels we’ve mentioned above. They might be a bit tougher to find, but they are also going to be the better option if you’re in for something rare. 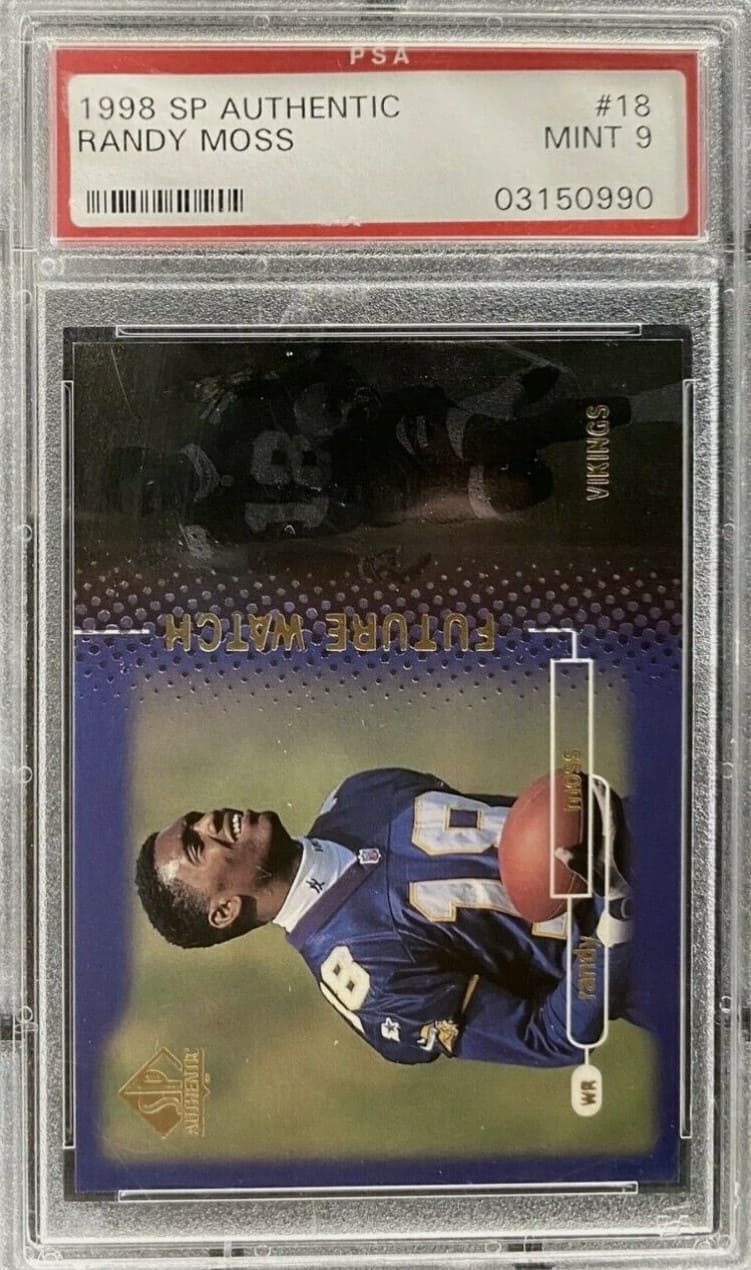 The SP Authentic cards are a lot more affordable than the E-X2001 parallel cards, but they’re still a bit more expensive than the Topps Chrome ones.

If you’re going to look for a Randy Moss card from 1998, then this would be a great option to consider going for. The card is particularly loved for its limited nature, which only means that it’s going to sell for more.

This card was limited to only 2000 copies, which for 1998, was not a lot. Remember, this was the time when card companies were pumping out massive numbers to satisfy the demands of the market, which often created an overflow of cards.

If you’re looking for something even rarer, you can go for the die-cut version of this card, which was limited to only 500 copies.

But with that also comes the higher price, so if you’re willing to pay the higher asking price for that version, it’s going to be a decent option for you. 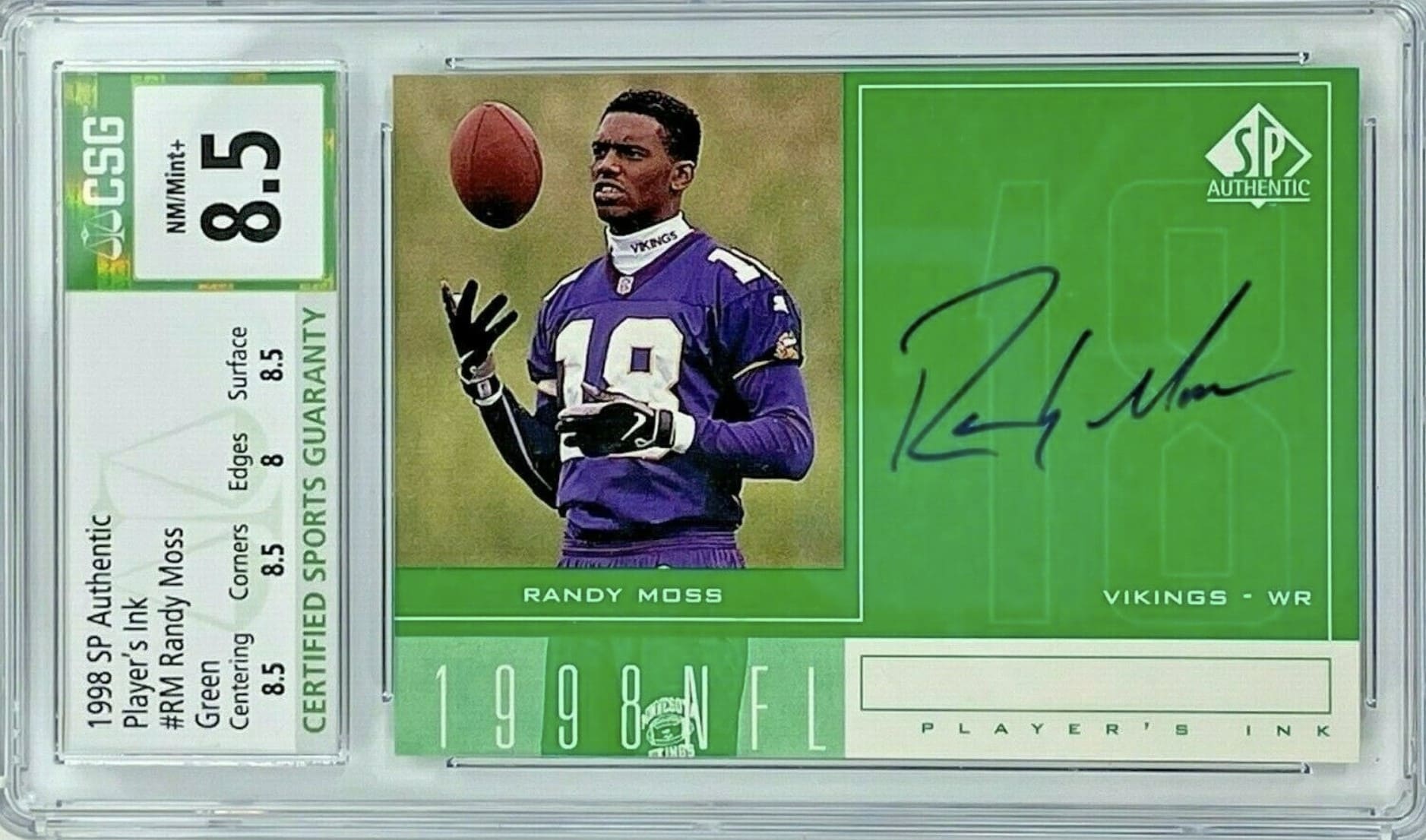 We’ve already featured the base card of the SP Authentic brand, but there’s another card from this company when it comes to Randy Moss rookie cards: the Player’s Ink version.

This card was very famous and sought-after when it came out. After all, it was one of the only cards to be released with an official signature of the player.

Back in the 1990s, player signatures increased the values of cards significantly. There were not many flashy and rare parallels as we have today. Instead, autographed cards were a bit rarer and thus a bit more expensive.

And that is the case with this Player’s Ink version.

While it does come from the same company as the card we’ve seen above, it is still a unique and interesting card, especially if you’re prepared to pay a bit more. This card can cost several hundred dollars and potentially even more than that, especially if the card is well kept. 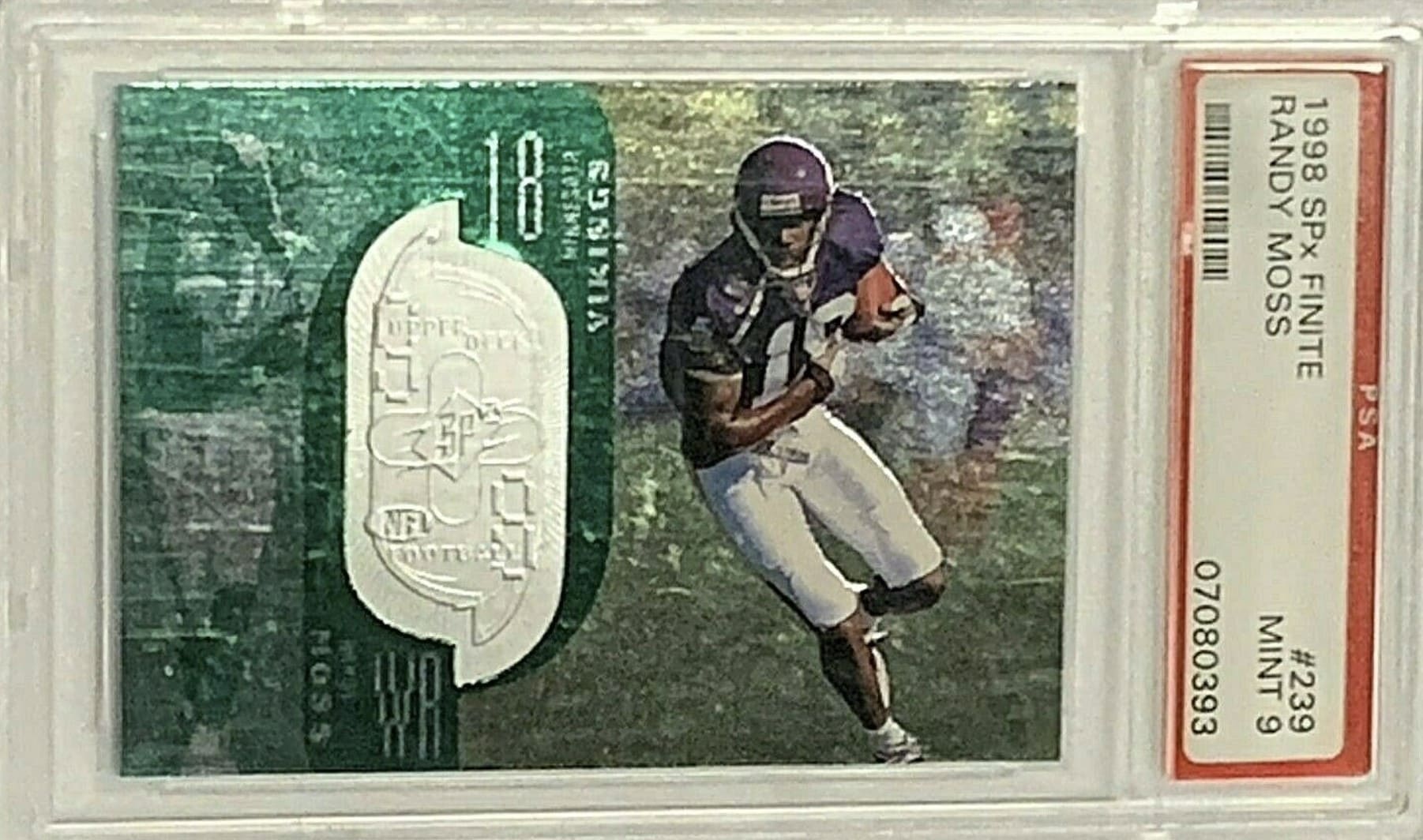 The SPx Finite Randy Moss Rookie Card is a bit tougher to find than the cards we’ve featured already in this article. This makes it a bit more expensive than the rest, but it also has an interesting design and layout.

The base card of this type was limited to 1998 copies, while there are also some parallels that you can consider.

The most notable parallels include Radiance and Spectrum (the latter only has 325 copies to its name), which tend to be even more expensive than the base card, but they are still quite popular among collectors.

Overall, the SPx Finite cards were some of the most popular Randy Moss rookie cards and they continue to be today, so you’re not going to have any problems finding this card, although the parallels can be quite hard to find and are thus more expensive. 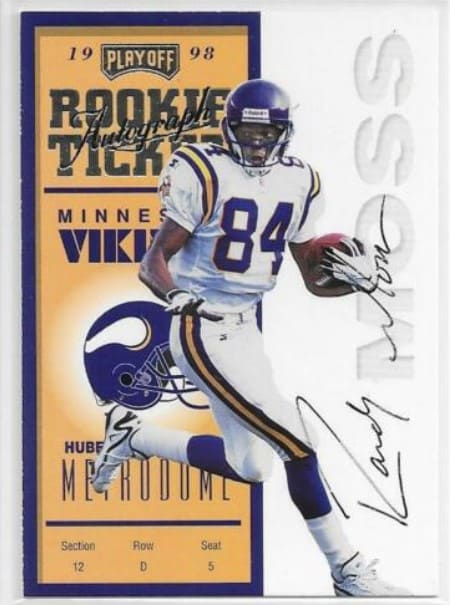 Last but not least we have the Playoff Contenders Randy Moss rookie card. This was one of the most high-ticket and expensive cards to come out of Randy Moss, which is thanks to the many premium features it has.

The first and most notable premium feature is the autograph on the card. It was one of the rarest cards to collect because of the autograph, and premium card collectors at the time flocked to autographed cards.

Secondly, it’s also quite rare and a bit tougher to find, so the prices for this card go into thousands of dollars.

For those reasons, this card is perhaps the top and even most expensive option when it comes to Randy Moss rookie cards.