Joao Felix hit the ground running in his first season at Benfica, and quickly turned into one of the hottest prospects in the world at the time.

In fact, he did well enough to earn a 126m Euro transfer to Atletico Madrid – good enough for the fifth most expensive transfer ever at the time.

In this article, we’re going to look at the best Joao Felix rookie card options for investors and collectors. 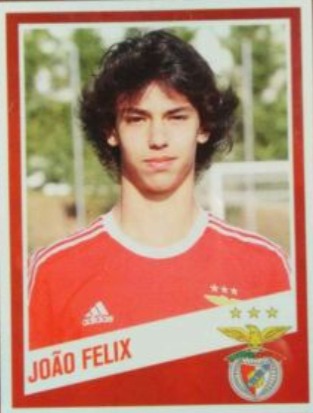 There isn’t a whole lot known about these sets.

What I can tell you is that every season there’s a different album that looks at all Benfica players in all sports (while Benfica is known for soccer, they have teams and athletes in fifteen different sports).

I’ve read that this album has over 600 stickers in it, but I haven’t seen a checklist to back that up. Although, if it covers all the different sports involved, then I can imagine it being a large checklist.

The 2015 collection has developed a bit of fame because it’s the first Joao Felix rookie sticker ever printed – three years before any other on this list!

This sticker isn’t from a well-known brand, or popular manufacturer, so it’s hard to know too much about it or the print run. 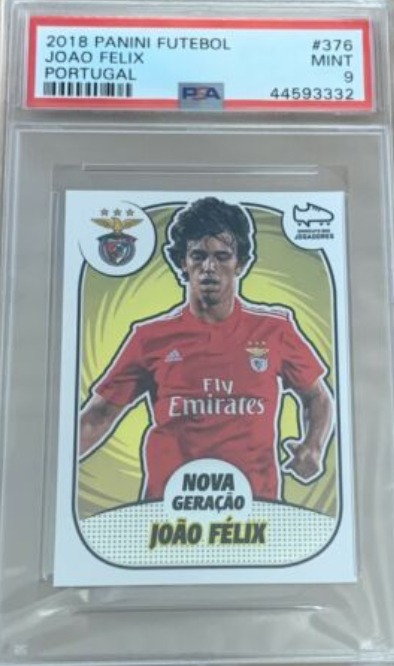 The first well-known and mass-released Joao Felix stickers are from the 2018 Panini Futebol collection.

This is the regular Portuguese League sticker set, so there’s a bunch of info out there on this compared to the first sticker we looked at.

While Felix doesn’t have a base sticker in this set, he does have one in the Nova Geração, or, New Generation sub-set.

This sticker is a foil too, which means it’s usually pretty hard to grade. In fact, stickers in general are harder to grade, which we look at in our stickers vs cards article. 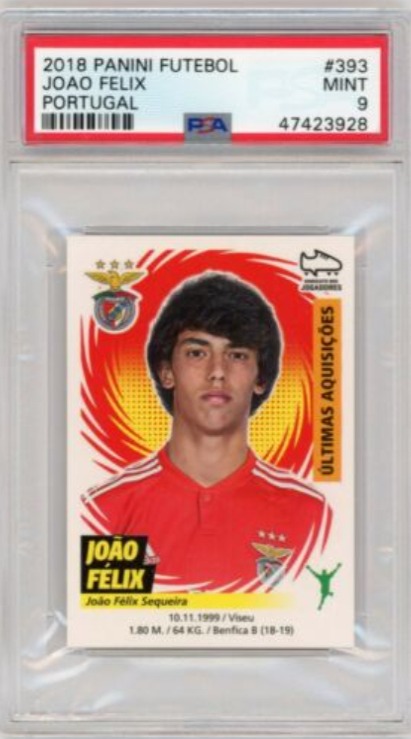 The other sticker from this release was the Últimas Aquisições, or Latest Acquisitions set.

The sticker shows a close-up photo of Felix, in what’s more of a traditional soccer sticker pose.

Because of that, this is the sticker I see related to Felix’s rookie sticker more than the ‘new generation’ sticker. 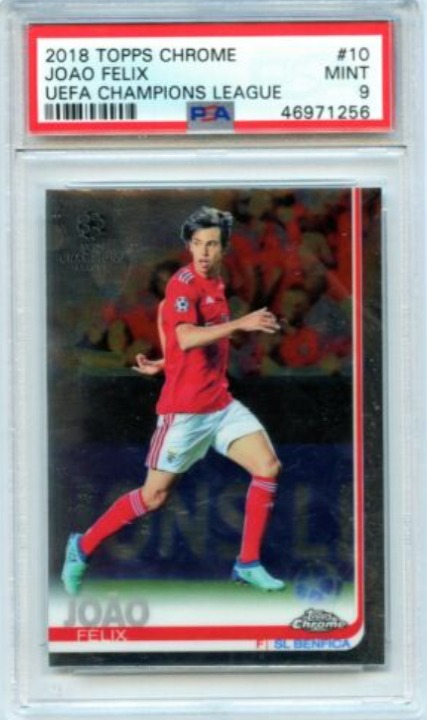 With the other items on this list so far being stickers, this is Joao Felix’s first rookie card (well, kinda… more on that next).

The Topps Chroms set is a super popular Champions League card set, and Felix makes an appearance in his Benfica colors. While there’s no fancy auto for Felix here, there are some cool refractors.

So, if you can get your hands on one of those super-rare cards you’re laughing. But really, any of these cards, even the base, are an awesome card to add to your collection. 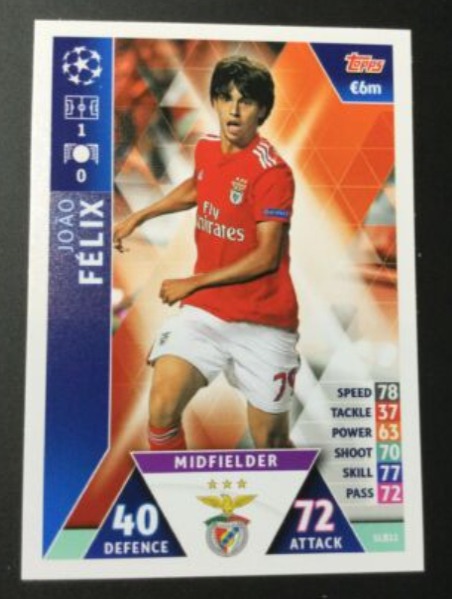 A part of the popular Match Attax card game, this card came out before the Topps Chrome card, so I guess this is technically Felix’s rookie card.

Although, the hobby usually overlooks game sets like Match Attax when looking for a ‘true rookie’ so most won’t count this card.

I do though, and I think Match Attax get overlooked a little too easily in general (that’s another story for another day).

This card was only released in Portugal and is incredibly tricky to find. So if you can get your hands on one you’re doing well.

There are plenty of other awesome Joao Felix cards out there that aren’t from his rookie year.

When you have the start of a career that Joao Felix did in his first three seasons as a pro, and sign for over $100m, you get a lot of great products created.