A member of the New York Yankees, Seattle Mariners, and Miami Marlins, his smooth swing and long career made him one of baseball’s finest hitters.

At the same time, he was also one of the oldest rookies to ever enter the league.

He was also one of the most unique players to ever play in the MLB. He made his debut with the Mariners in 2001 after a few years in NPB (Japanese Baseball League).

Just imagine how good he would have been if he entered the league much earlier… Let’s take a look at some of the best Ichiro rookie card options. 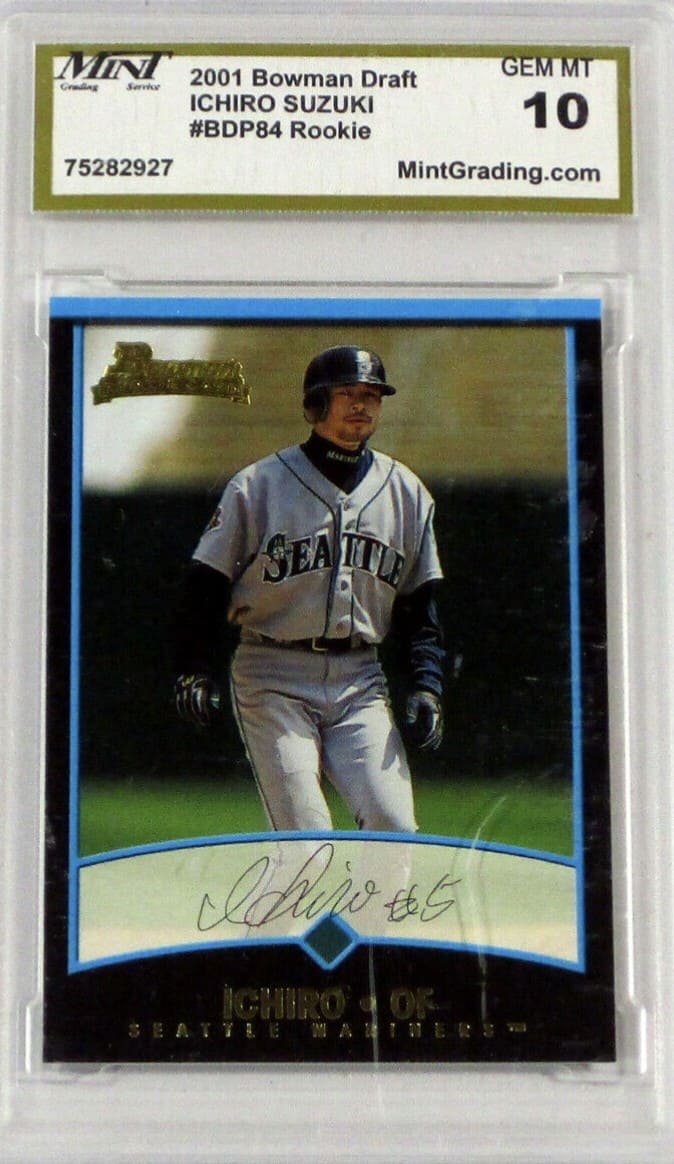 The first card we’re going to mention here is the Bowman Draft Picks card from 2001.

Bowman is one of the best card types for baseball, which is why many collectors were looking forward to this card being released in 2001.

Even though this is not the main Bowman set from 2001, it was released towards the end of the year when Ichiro was also included in the set.

There was another Bowman card that was released of Ichiro, which is the Bowman Chrome, which we’ll talk about in a bit. 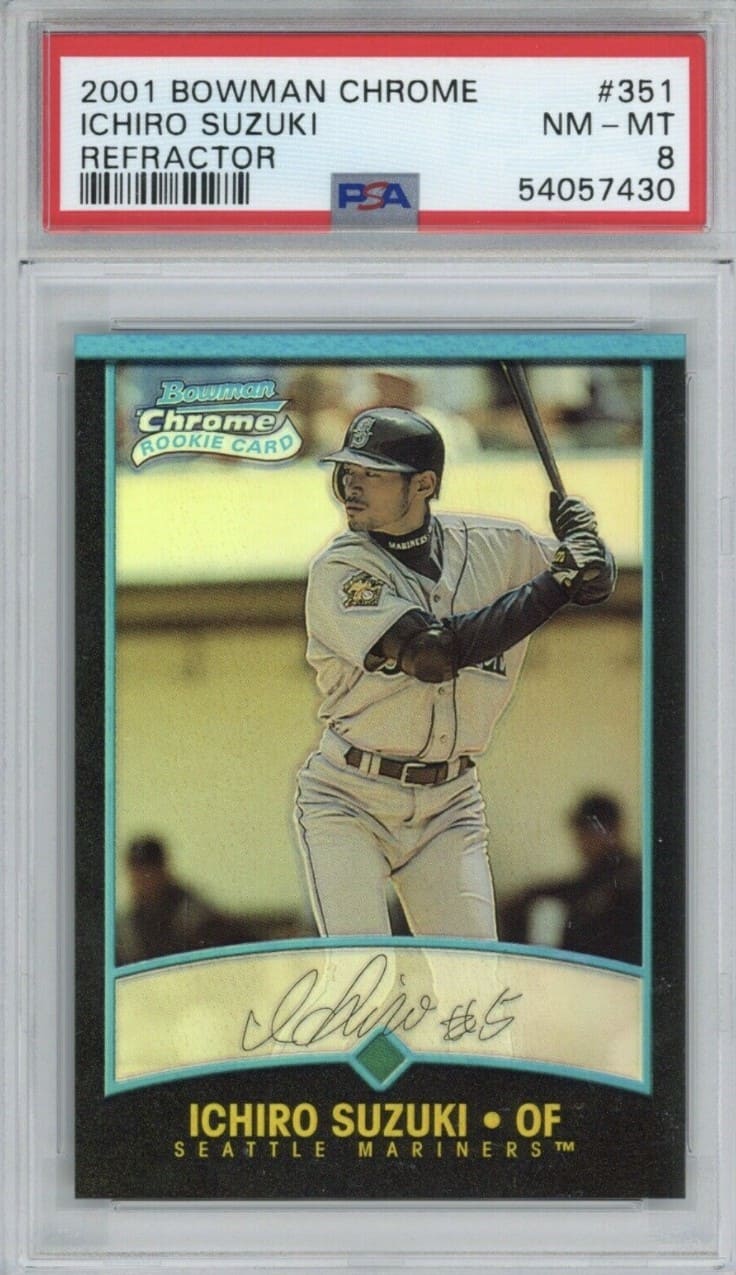 The Bowman Chrome Ichiro Suzuki is one of the best and most valuable rookie cards of this player.

While there will be more valuable and more expensive parallels for this card (like the Gold Refractor, for instance), this is one of the best base cards that you might be able to collect.

Expect to be a bit more expensive than the Bowman Draft Picks card, though, as it can cost thousands to get.

The main challenge is to find a card in good condition since most of these Bowman Chrome cards are not preserved very well. 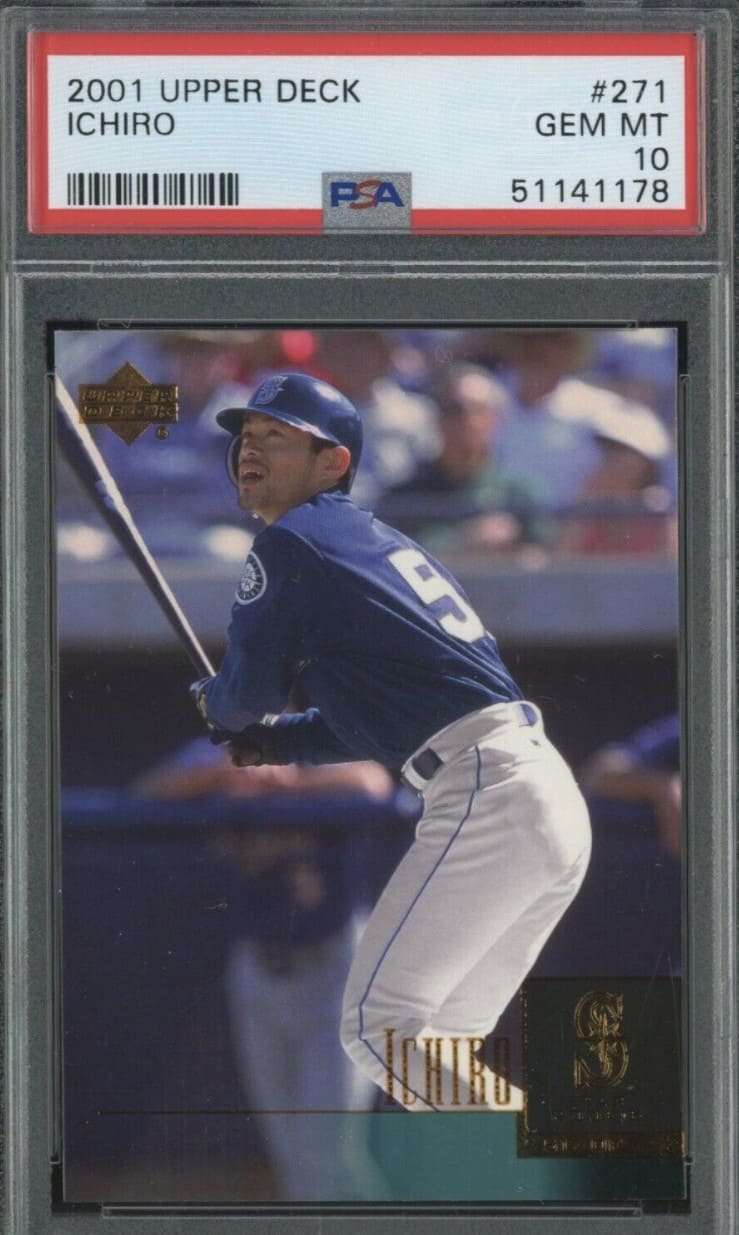 This Ichiro rookie card by Upper Deck is one of the most popular mainstream cards out there.

It was one of the most highly coveted mainstream cards because many collectors were after Upper Deck cards, which were some of the best baseball cards in the early 2000s.

While this card might not be the most valuable or expensive card in the world, it does have something special about it.

The image is one of the best images of Ichiro you’ll find on any rookie card, and it’s also available for reasonable prices, which makes it a great option for all collectors. 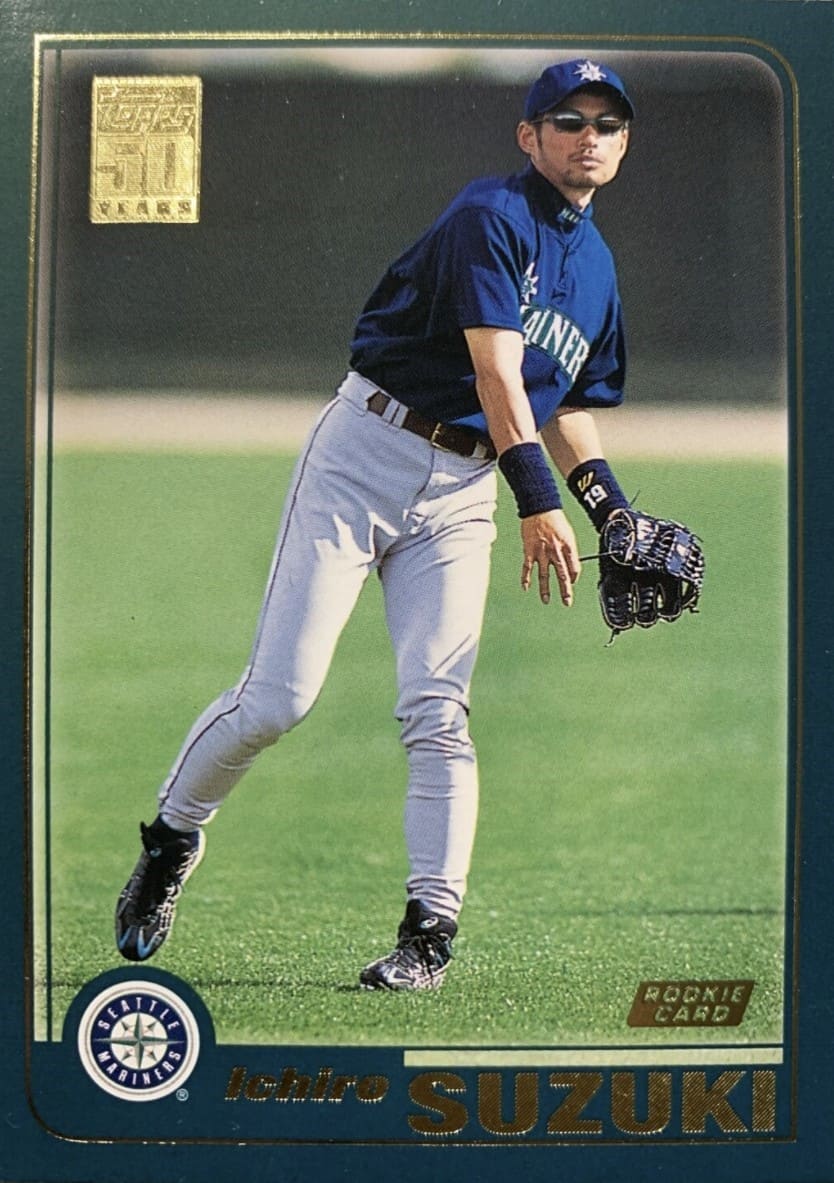 Similar to the Upper Deck card, the Topps Ichiro rookie card is also a great mainstream option that is widely available out there today.

One of the best things about this card is the image on the card, which shows the cool nature of Ichiro Suzuki with his sunglasses.

It’s not very expensive, though, so if you’re looking for something that would count as a premium rookie card, you might want to look elsewhere.

There is some variety with this card, though, such as the Gold parallel, which tends to be way more expensive than the base card. 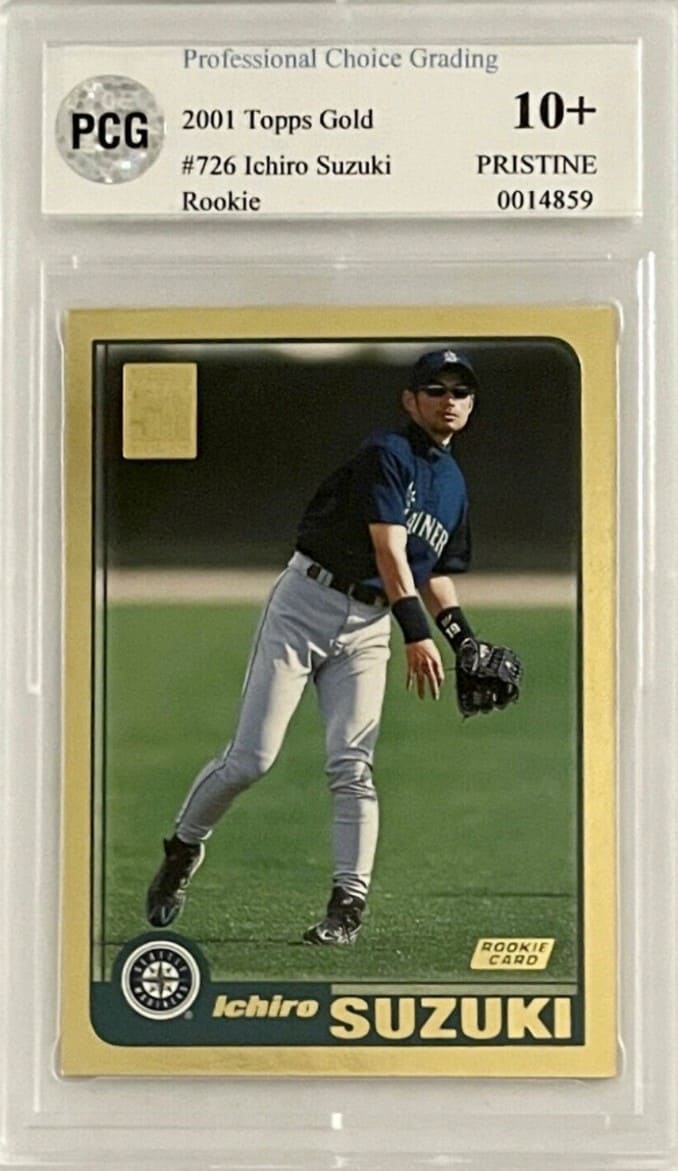 Overall, Topps will be one of the best and most reliable options for you to pick, and if you’re looking for a sensible investment or just a card to add to your collection, you can’t go wrong with it. 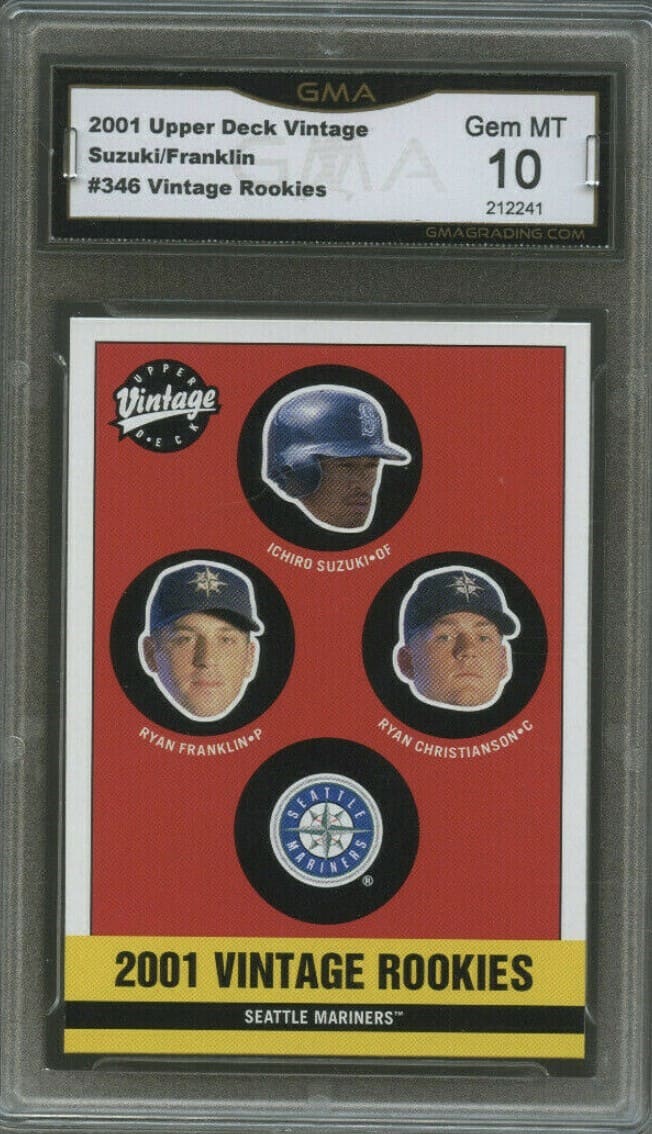 Just a quick mention for the 2001 UD Vintage card which is one of the most commonly seen rookie cards of Ichiro on marketplaces.

This card is very interesting because it’s not your typical rookie card – it has headshots of Seattle Mariners draft picks from 2001, which includes Ichiro, of course, as well as Ryan Franklin and Ryan Christianson.

A good option for you if you’re looking for a cheap and affordable Ichiro rookie card. 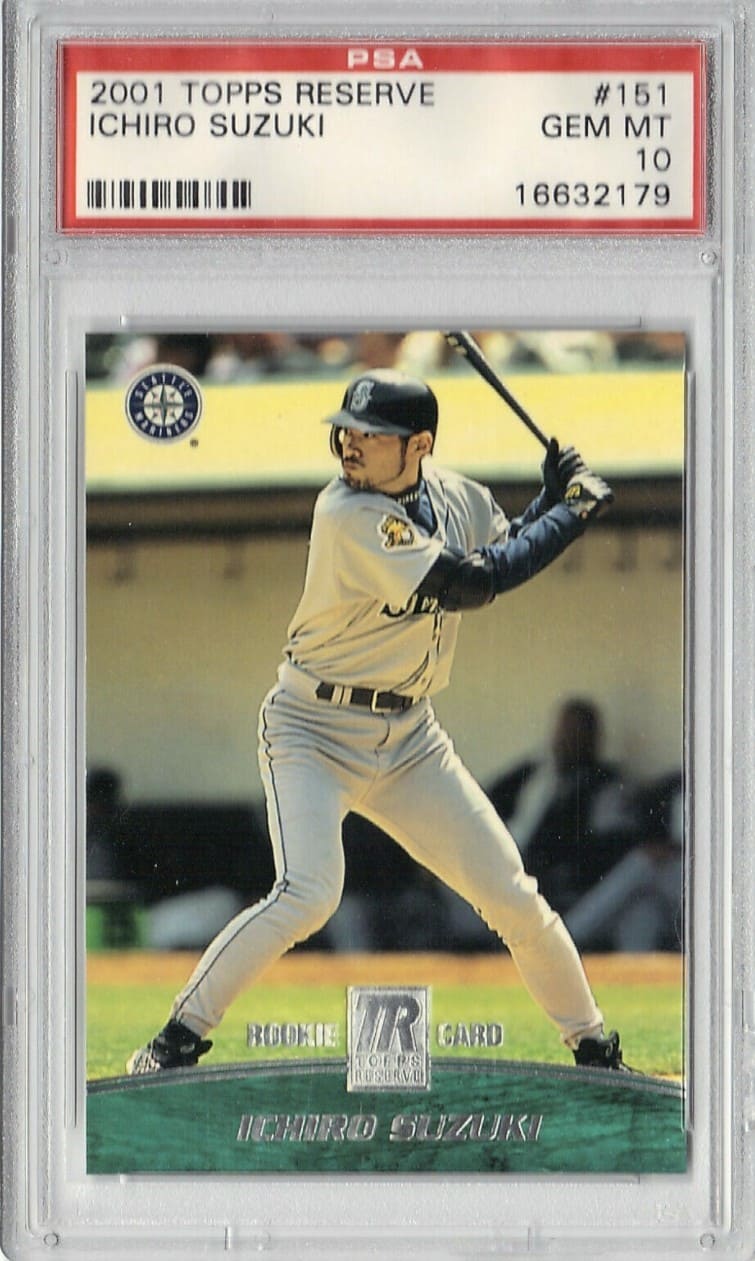 Now, Topps Reserve was a bit of a weird card brand.

It’s not Topps, but it’s caught somewhere in between being a rookie card and being an exclusive card, as it only had 1500 copies to its name.

And this shows today because you won’t be able to find many of these cards in great condition.

That is why the best-graded options for this card can cost thousands. 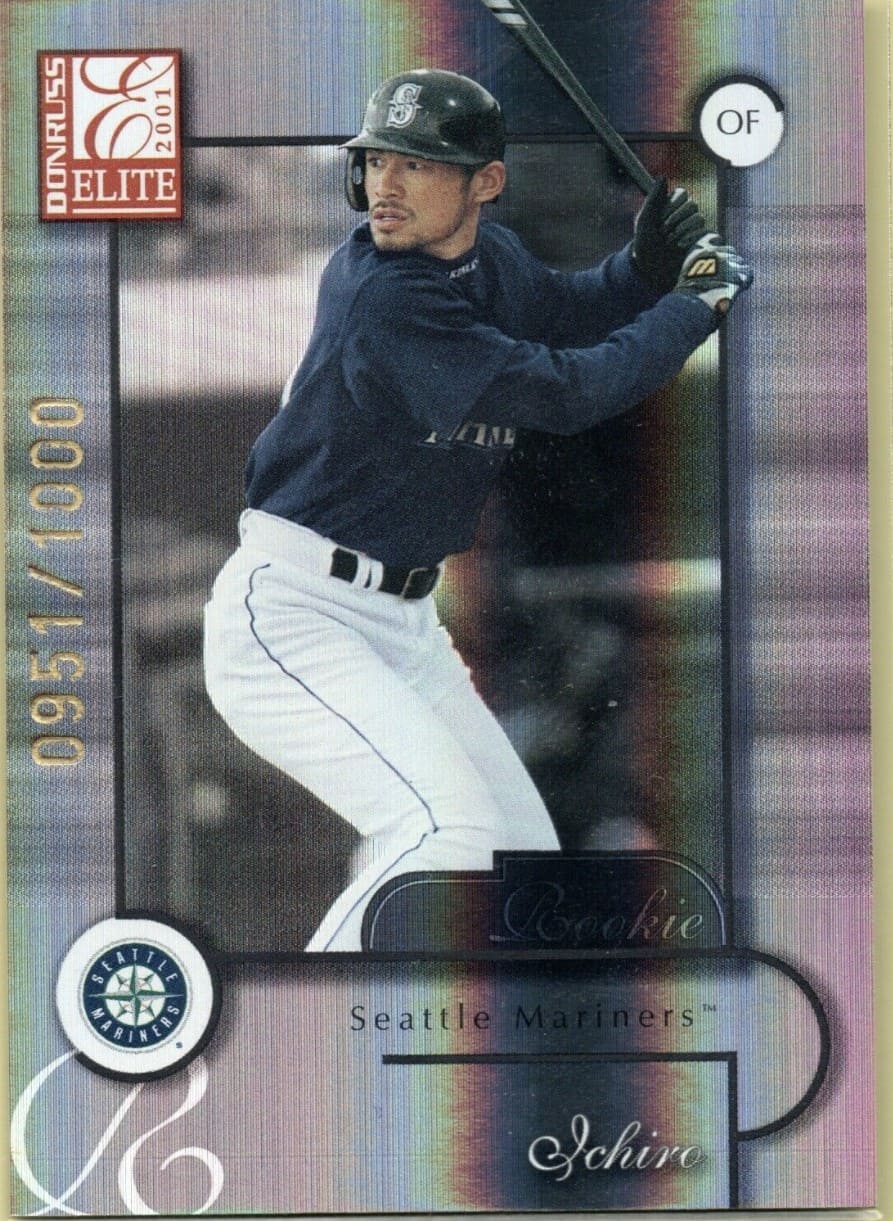 The Donruss Elite Ichiro rookie card is yet another option with a limited print run that you can go for.

This brand only had 1000 copies, and Elite has always been a decent brand to pick when it comes to baseball cards. 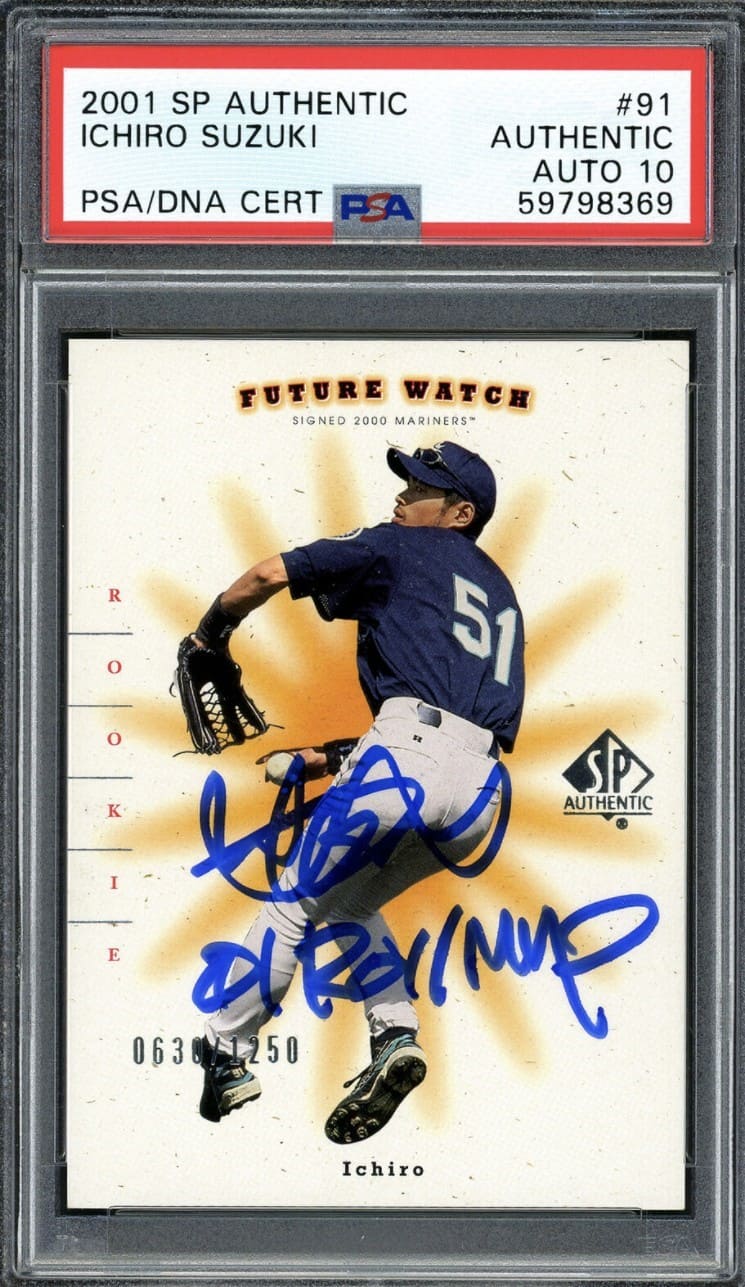 Now we’re moving on to some more expensive rookie cards for Ichiro Suzuki and the SP Authentic could be considered a premium card.

You will find many instances of this card with an autograph, although some of them will also come without an auto. These autographs were collected after the cards were packed because the cards were not officially released with them.

It is one of the best card options for Ichiro thanks to its limited quantity and also due to its high premium nature.

It’s a bit harder to find a card like this in top conditions, so those are going to cost even more than others.

Also, the card only had 1250 copies which are fairly little compared to some other base cards we’ve featured above. This card is one of the most valuable Ichiro rookie cards, and it’s a great option for an investment if you can afford it. 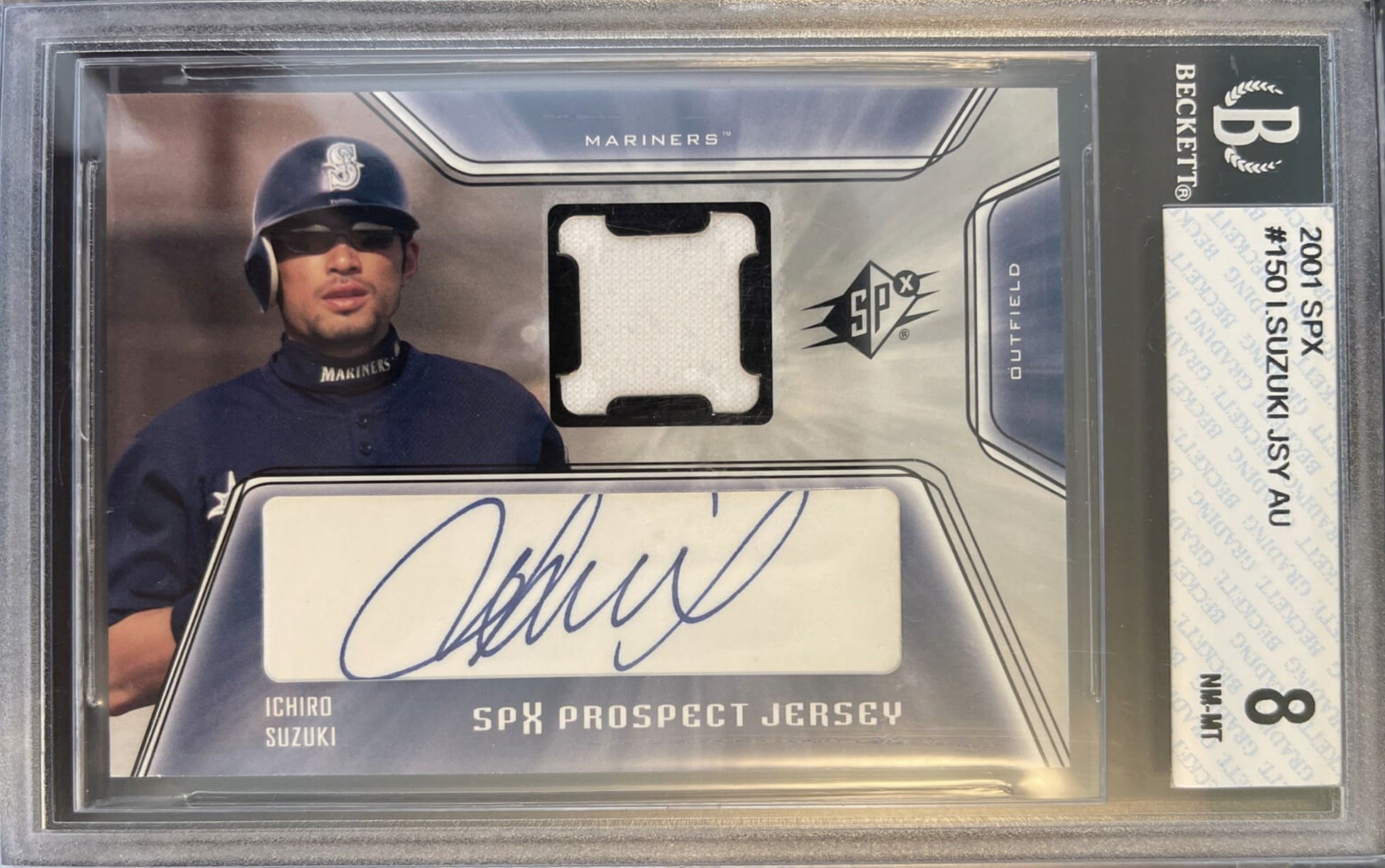 Here it is, the most valuable and the most expensive Ichiro Suzuki rookie card.

This premium card can cost several thousand dollars and potentially a five-figure sum, especially if the card is nicely preserved.

SPx was one of the best card companies to go to if you were a premium card collector in the early 2000s.

It had everything you’d expect from such a premium option: an autograph and a jersey patch. At the same time, there’s only a limited supply of these cards, which makes them even more valuable.

While it might not be the best option for you if you’re on a budget, it will certainly appeal to those who can afford to have a more premium card in their collection.

Now that we’ve seen the best MLB rookie cards from 2001 for Ichiro, let’s take a look at some of his Japanese cards from 1993.

There are not as many options to be had here, but some of these can be quite interesting and also valuable if you can find them. 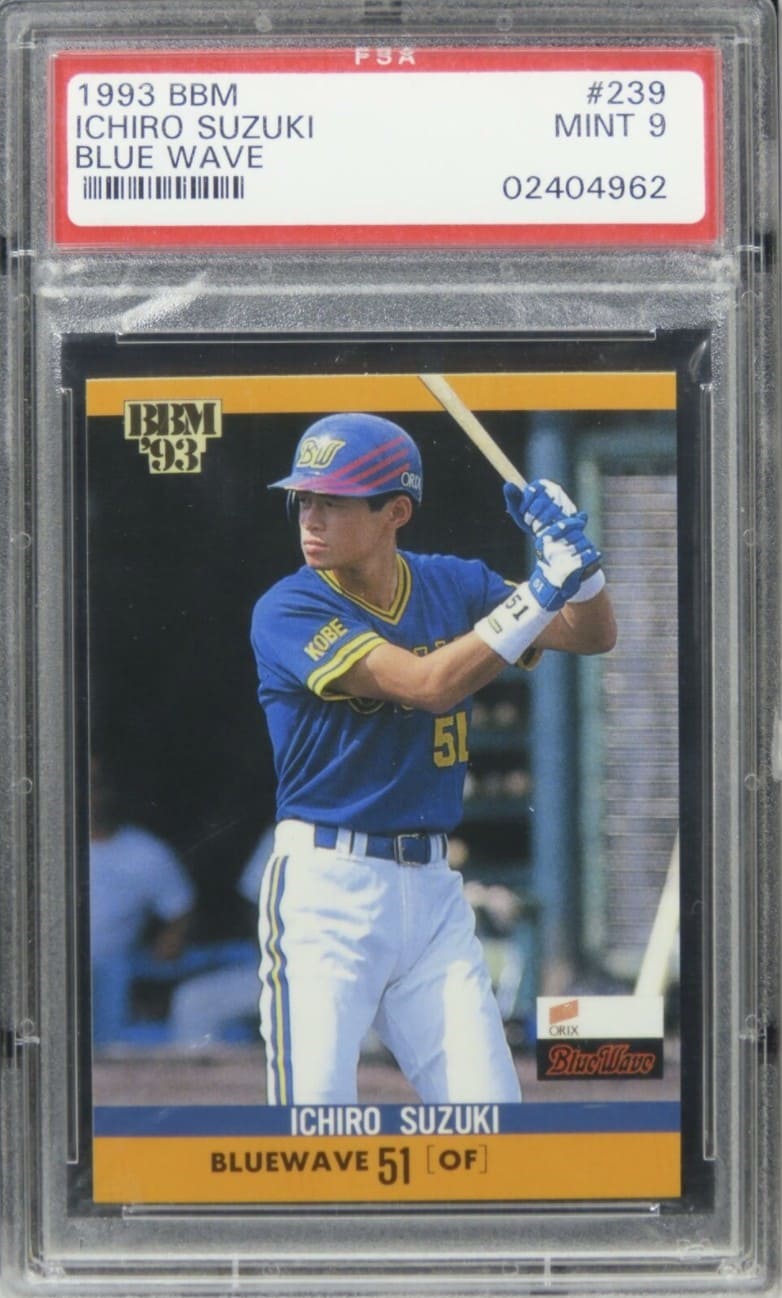 If you prefer to get rookie cards of Suzuki when he was young, then you’ll need to take a look at this card.

This 1993 BBM card is a fan favorite for Japanese card collectors.

It’s the most easily available card from 1993, as you might be able to find many of these cards on online marketplaces like eBay, even today.

This particular card in the image above is the Blue Wave parallel, which is a bit rarer than the base card and thus more expensive.

The best-graded base cards of this type can cost several hundred dollars and potentially more. 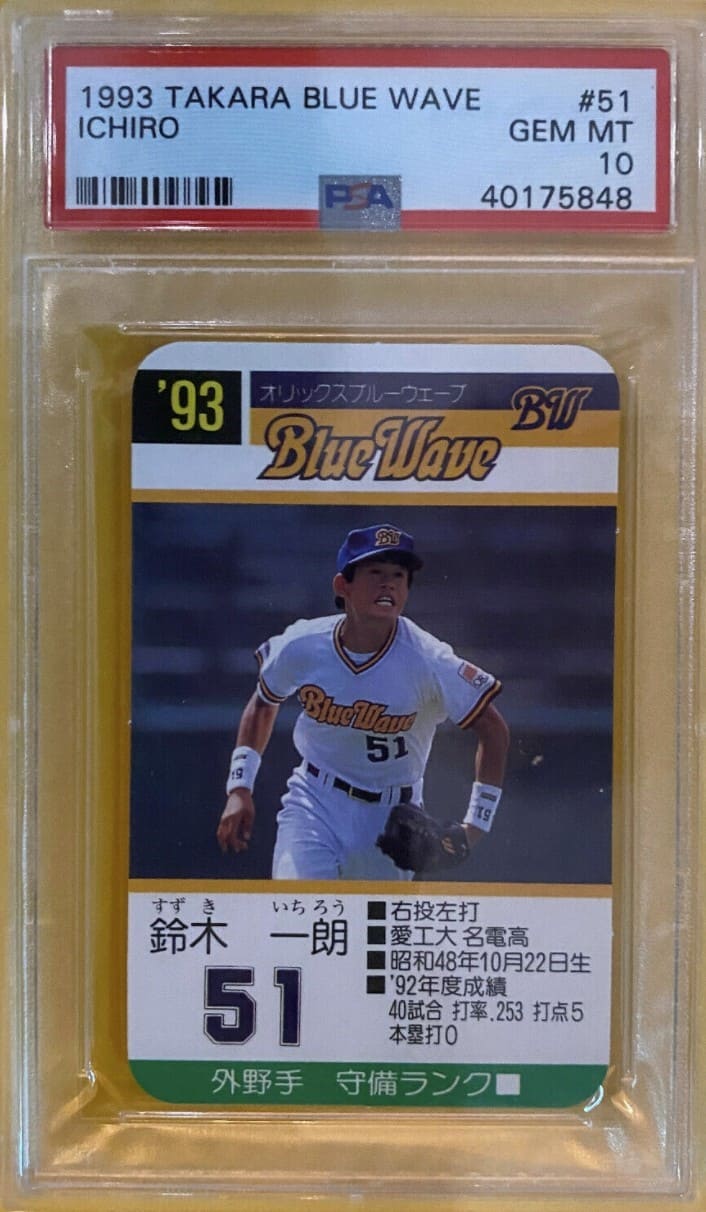 This Takara card is a bit more expensive than the BBM card, mainly because of its rarity.

This set only had 30 cards of Ichiro, so you’re probably going to have to pay a bit more to get it.

The card has Japanese wording on it, and it’s not as elegant as the BBM card, perhaps, but certainly very popular among collectors as well. 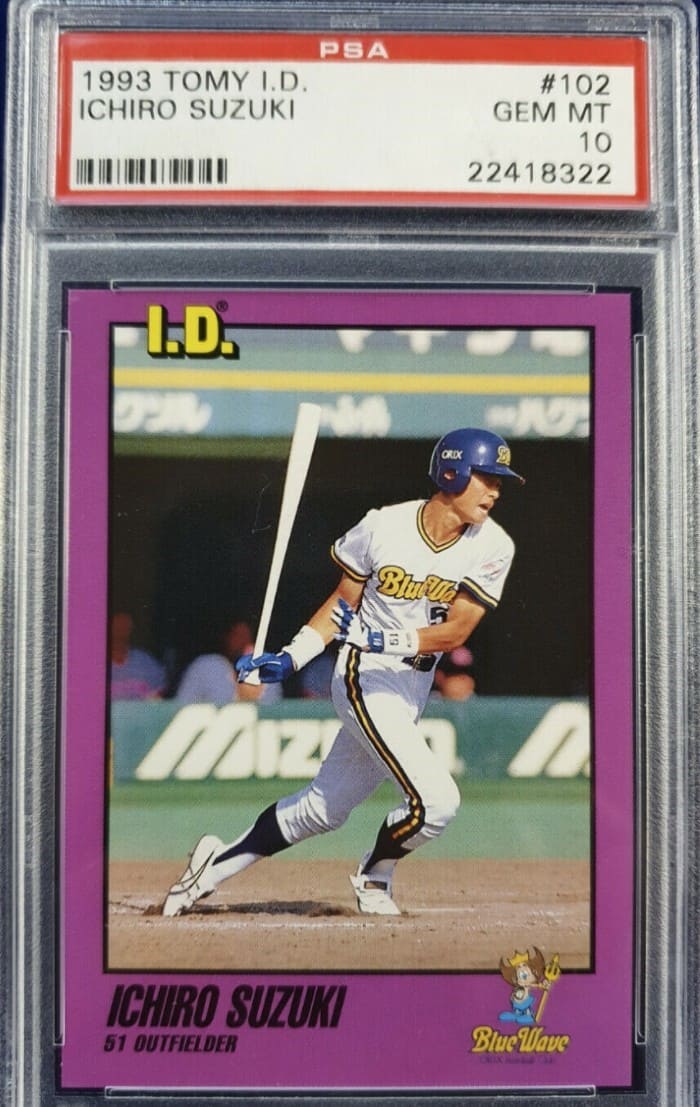 The last Ichiro Japanese card that we need to mention here is the Tomy I.D. rookie card from 1993.

This card is also quite tough to find; it makes it a bit more expensive than the BBM card but on par with the Takara card.

The main difference between this and the Takara card is the wording, as you’ll find it in American wording as well, which is a bit more appealing to some collectors, while others won’t mind it at all.

There’s plenty of other top end Ichiro cards you might want to check out on eBay too.