Despite the fact that Favre finished his career in 2010, Favre’s cards are still going strong. In fact, they’re still growing in popularity and have yet reached their full potential.

He’s one of the best NFL quarterbacks in history, known for his reliability and record-setting numbers. When he retired, he was the all-time leader in passing yards, passing touchdowns, quarterback wins, and most interceptions.

However, his introduction to the NFL wasn’t by any means swift…

The Atlanta Falcons coach Jerry Glanville said in 1991 that it “would take a plane crash for him to start Favre.”

Favre would prove Glanville and all the doubters wrong after being traded to the Green Bay Packers. Very wrong.

These are the best Brett Favre rookie cards that you can consider as a collector. 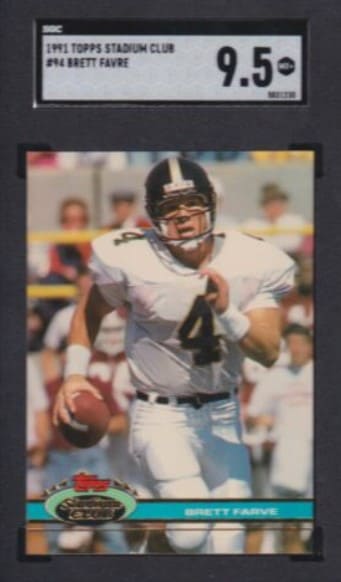 Let’s start off with one of the most well-known Favre rookie cards, and that is the Topps Stadium Club rookie card.

This card gained a lot of interest and popularity initially, but not for good reasons. The biggest and most obvious problems was the spelling of Favre’s name on the card – it reads “Brett Farve” instead of Favre.

But today, it’s this feature that makes this card so special. The mistake makes the card imperfect and thus, somehow different from the rest of the cards. Interestingly, the error made the card even more popular.

Of course, if you want a Favre card instead of a “Farve” card, then you’d be better off by skipping this card altogether.

But if you have a penchant for unique things and are willing to accept an imperfect product, then go for it. 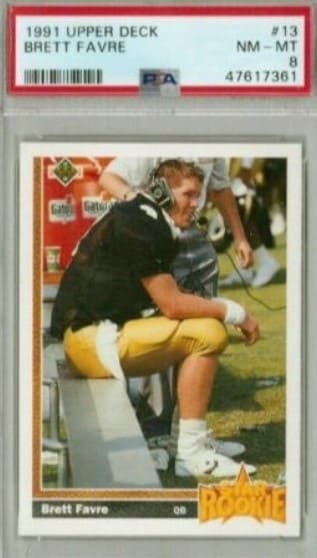 I know this card doesn’t do itself any favors with the image choice. It’s the one feature that many collectors tend to dislike about this card, and it’s not as expensive as it might have otherwise been.

But I find the image quite interesting; in fact, it’s the perfect image to sum up Favre’s first season in the NFL – lots of sitting, not much action.

The good thing about the card is that it’s not the most expensive card in the world as a consequence. Despite the fact that it’s made by Upper Deck, this is one of the least expensive Brett Favre rookie cards.

So if you’re in for a good bargain and you love a good bidding war on eBay, then this might just be the perfect card to satisfy your wants. 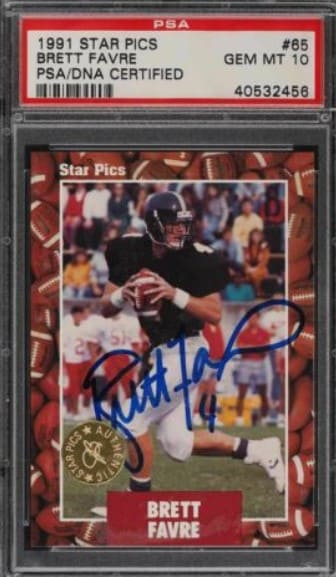 Here it is, the most expensive Brett Favre rookie card out there.

That’s if you can find a certified, highly graded card. In that case, the value of this card can go into five figures.

It’s known as the very first autographed Favre card in history, so it will also have some additional value because of that fact.

But you might struggle to find a card that has an autograph on the front; that’s because Favre autographed many of these cards on the back of the card. You’ll want to make sure the autograph is certified and only go for graded cards, though.

There will be many knock-offs. Look for the “Authentic” sticker on the card as well as an autograph that’s on the card, even though it’s quite easy to forge the sticker and get it from other cards. Go for graded cards. 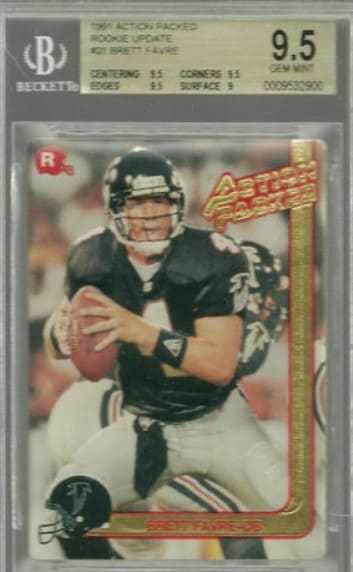 Moving on to something a bit more exciting, the 1991 Action Packed Brett Favre rookie card is the go-to option for many entry-level card collectors.

It might not look like much by today’s standards, but it was one of the hits back in the 90s.

The gold foil was seen as a premium feature in those days where every little bit of shine added more value to the card.

And this time, the image of Brett Favre is on point – with the ball in his hands, looking to make a play for his team. Admittedly, there wasn’t a lot of that with the Falcons… 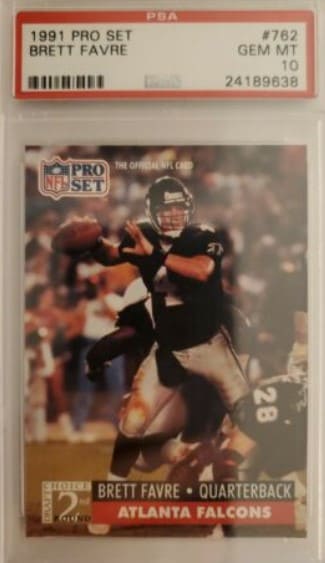 If you’re just looking for the most popular Brett Favre rookie card, then the Pro Set card is the way to go. This card achieved tremendous popularity as it was seen as the go-to rookie card, and also the “official NFL card”, as it is written on the card.

You could say that this card has an elegant look to it, although there’s a lack of graphical elements that you’ll see on today’s cards. It still looks fairly basic by today’s standards, but some collectors will like the classical look it has going for itself.

On the bottom of the card, you’ll find all the basic information about the player, while on the top portion of the card, there’s an NFL logo and the already mentioned “official NFL card” part.

The interesting thing is that this card achieved some worldwide fame thanks to the different variations of this card sold worldwide.

One of the most common variants of this card was the Spanish version. 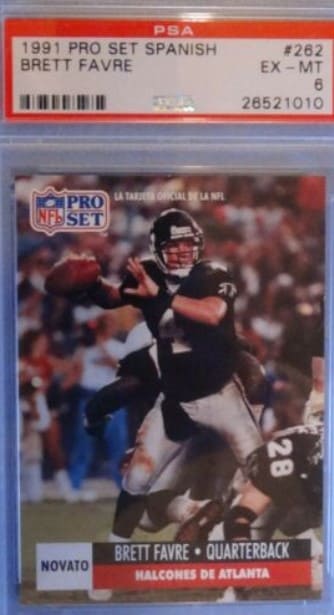 The Spanish version was sold in Mexico and in some parts of South America, but also in some European countries.

In essence, it looks largely the same as the American version, except for the words written on the card – they’re in Spanish, of course. You’ll have to spend a bit more to get the American version but the Spanish card is a great choice for collectors who want to have as complete a collection as possible. 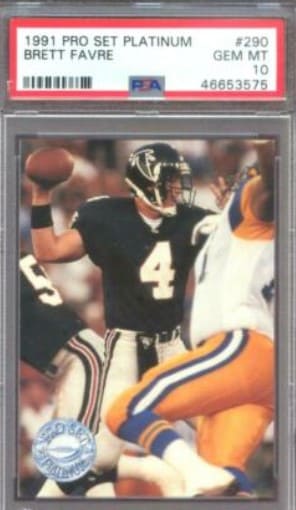 So there’s the Pro Set version of the card, but there’s also a Pro Set Platinum Brett Favre rookie card. So where’s the catch, what’s the difference between the two?

Well, the first is that the two brands are essentially two different card companies, even though they are still a part of the larger branding group of Pro Set. Platinum was meant to be an additional collection to the base Pro Set cards.

Pro Set cards tend to be a bit more popular than the Platinum cards, but these are still an excellent option because they’re easy to find, and they’re not that expensive either.

The Platinum card doesn’t have any text on the card whatsoever, which might be a slight turn-off to those who want a more graphically-developed card.

On the other hand, the card will appeal to collectors who want a nice, clean image of Favre with the ball in his hands, wearing his #4 jersey with the Falcons. Apart from the Pro Set Platinum logo on the bottom of the card, this one only has an image.

The back of the card will reveal Favre’s stats and some information about him as an up-and-coming football player. If you’re looking for a great card that will be friendly to your budget, then the Pro Set Platinum Brett Favre rookie card can be a great choice. 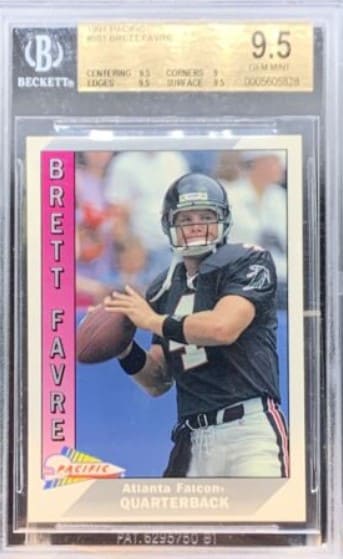 This card doesn’t hide that it comes from the 90s… I mean, just look at it!

The pink border on the left, the squared-off font, the image, and the overall design – they all scream 90s. I don’t know why, but somehow it reminds of Baywatch, 90s vibes, and the baggy colorful clothes that people used to wear – all at once!

You could safely say that the design of this card is slightly dated, despite the fact that it only comes from a couple of decades ago. If I’m honest, I’ve seen cards from the 60s and 70s that have aged better than this card.

However, therein lies the beauty of this card. It’s a time capsule, a collection piece for those who prefer retro cards to modern cards. It’s also not that expensive, so it will be quite easy to get your hands on this 1991 Pacific Brett Favre rookie card. 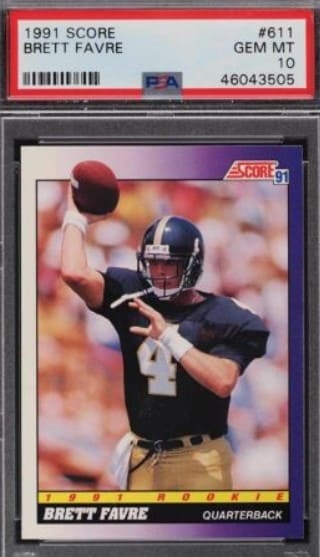 The 1991 Score Brett Favre rookie card is, admittedly, not much better in terms of looks as compared to the Pacific card.

It still has many features that gives away the fact that it comes from the 1990s. However, that in itself is not necessarily a bad thing – in fact, it’s the one that makes so many collectors opt for this Brett Favre rookie card.

The action image of Favre in his #4 jersey is surrounded by a white-purple border, and there are some graphical elements on the bottom of the card that display the key information about the player.

It’s slightly more expensive than the Pacific card, but you surely can’t expect this card to cost over $1000. Most card prices for this one fluctuate well below that mark, even for the highest grades.

So those are the main options when it comes to Brett Favre rookie cards, but there are still some other decent options that are not as well known. 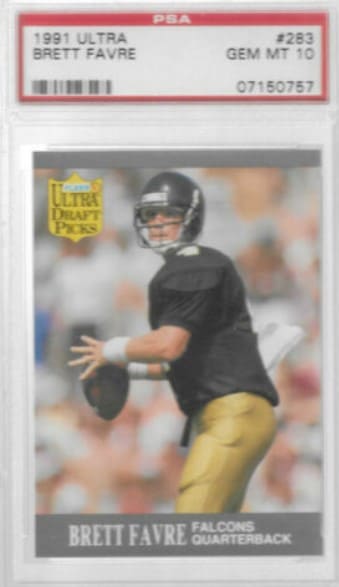 The Ultra card brand in itself is fairly well-known among card collectors, but it’s the card itself that doesn’t make you feel excited. There’s just a lack of action, a lack of life on this card. It’s still a decent Favre rookie card to own, but just not as exciting as some other cards on the list.

Perhaps a bit of color on the card would make it a bit more interesting, especially considering that it has the gray graphics on the bottom of the card. 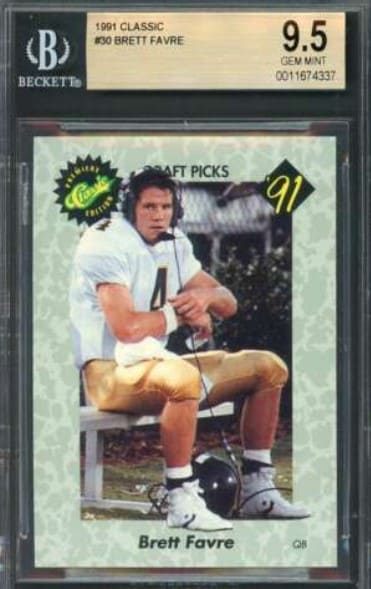 The 1991 Classic Brett Favre card is another low-budget option you can consider getting.

It’s easily attainable and not very expensive. However, the image on the card is not the biggest crowd pleaser in the world. And the overall design is very 90s, but not many collectors pay particular attention to this card.

So if you’re willing just to add something to your collection that won’t cost a fortune, then this card could be a decent option, too.

What Is Brett Favre’s Rookie Card Worth?

What are Brett Favre Cards Worth?

They might be worth anywhere between several hundred dollars to several thousand, depending on the card you have, its condition, and its authenticity. The Star Pics card is the most expensive, because it has an autograph and it’s one of the first, if not the first, Brett Favre card to have an autograph on it.

What Was Brett Favre’s Rookie Year?

1991 was the year when Brett Favre was drafted by the Atlanta Falcons. At the time, Favre was the number 33 overall pick in the draft. He was seen as a decent talent with some potential, although the Atlanta Falcons coach Jerry Glanville wasn’t especially keen on Favre. He was traded to the Packers the following year where he made a name for himself as one of the best quarterbacks in history.

So there you have it, these are the best Brett Favre rookie cards you can go for. Many of these are widely available and relatively cheap, meaning you won’t have to spend a fortune to get your hands on one of these. It just depends what types of cards you prefer – some are very 90s, while others have a more classical feel to them.