Drafted in 2019, Tyler Herro was part of one of the most widely anticipated rookie classes of the 2010s.

Herro was the 13th pick in the first round, which was quite impressive considering that the draft class had the likes of Zion Williamson and Ja Morant.

And since he’s a part of a 2019 draft, we know that there are tons of options when it comes to Tyler Herro’s rookie cards. There are choices for just about any type of collector, regardless of your style preferences or budget.

Let’s take a look at some of the most popular Tyler Herro rookie card options to see which one’s right for you.

We’ll start with more mainstream and cheaper cards and we’ll then move to premium and slightly more expensive cards. 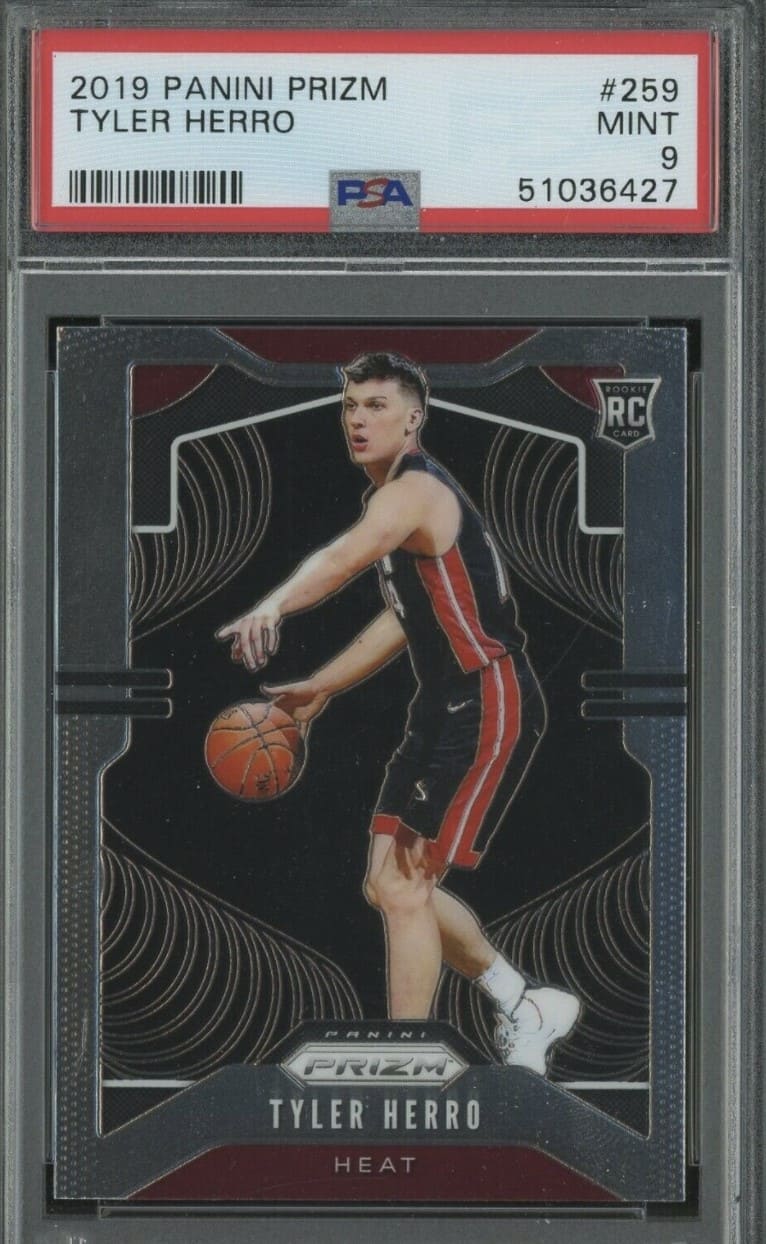 The Panini Prizm 2019 Tyler Herro rookie card should be near the top of your checklist if you’re looking for a popular card that won’t cost you thousands of dollars, and still has the potential to do well in the future.

As is almost always the case with Prizm cards, there’s gonna be a lot of interest in them, and consequently, the print runs are going to be higher.

It has that typical Panini Prizm design and looks, so you can’t go wrong if you’re looking for a good entry-level card that has a lot of potential for the future.

Of course, let’s not forget about the tons of different parallels, or the so-called Prizms, that you can go for… 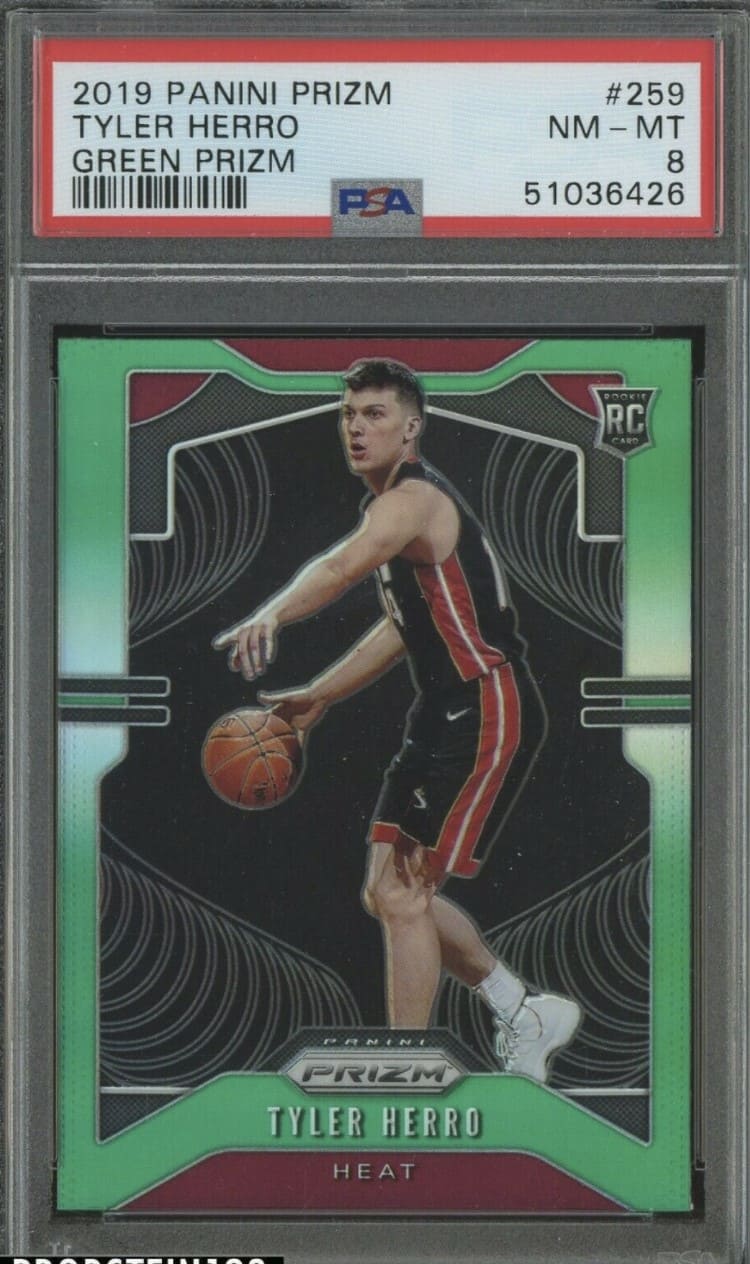 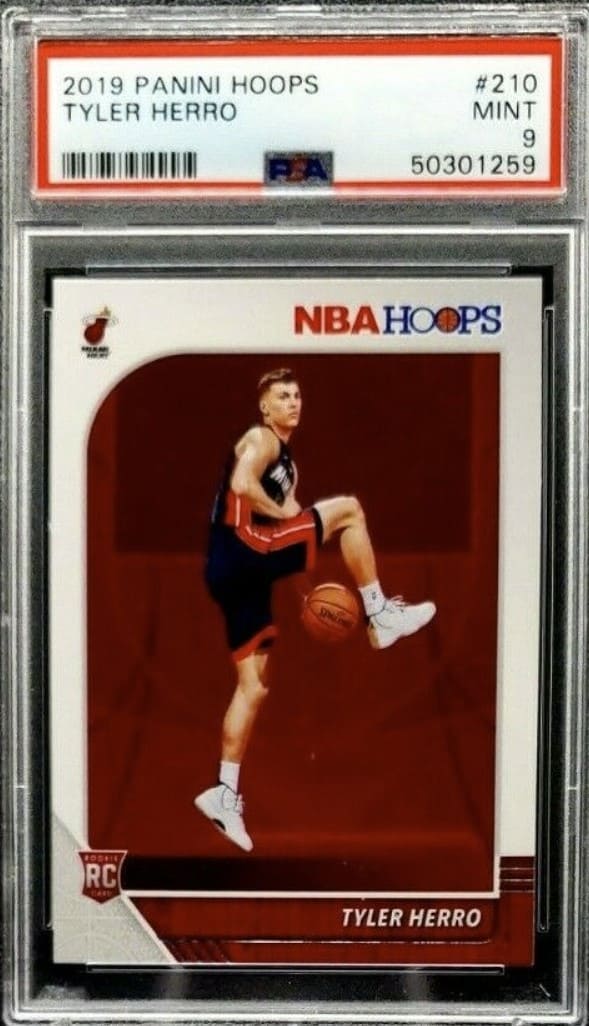 There’s no rookie card list without an NBA Hoops card, and Herro’s list is not any different.

NBA Hoops is one of the most established rookie card brands and they’ve got a good reputation when it comes to reliability and longevity, so they’re certainly a good investment, especially if you’re on a budget.

Expect these to cost anywhere between a few hundred to potentially more, depending of course, on the condition of the card.

This card even has some flair to it, with Tyler Herro attempting a pass between his feet to a teammate, a skill he’s tried often.

As with the Prizm card, you’ll also have some nice choices when it comes to parallels, but certainly not as many as the Prizms. Red Explosion, Artist Proof Gold, and Artist Proof Black are among the rarest and most valuable parallels of the NBA Hoops card. 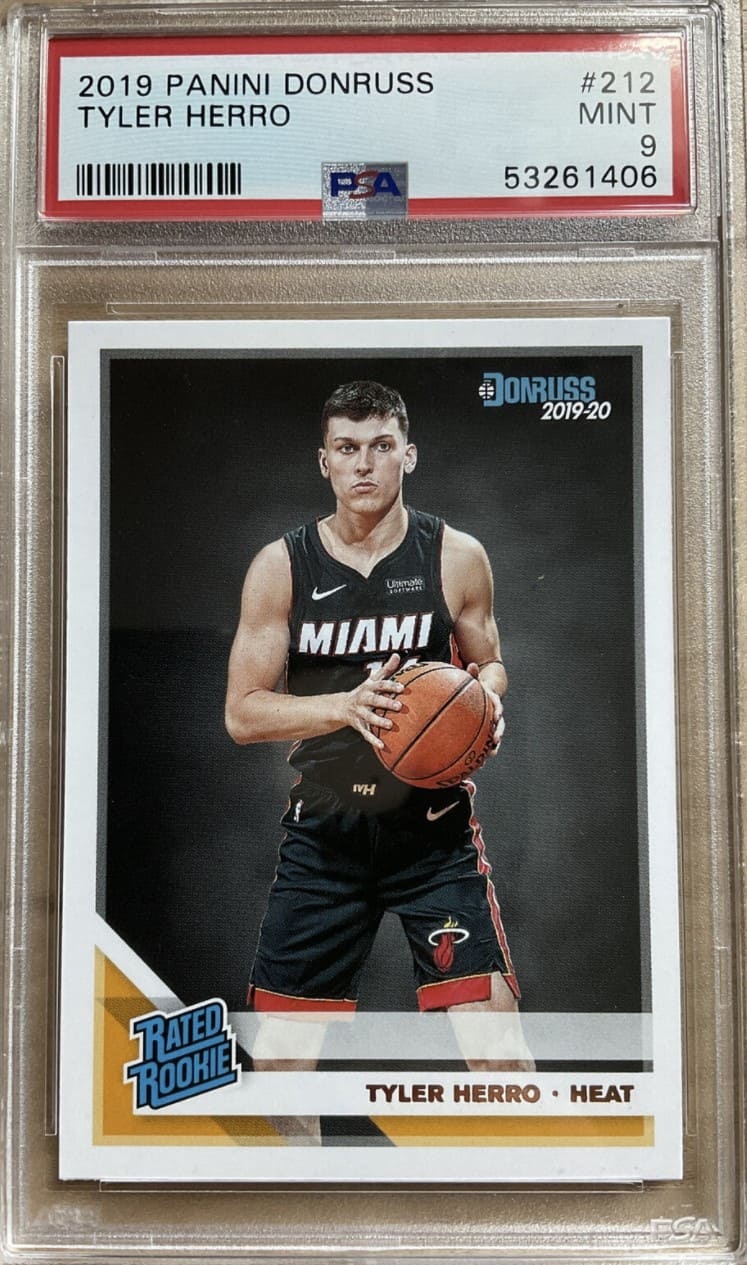 When we’re talking about the mainstream options, we simply couldn’t forget to mention the Donruss Rated Rookie card, which remains to be seen as one of the most popular options on this list.

Noted for its high print run, easy availability, and decent pricing, the Donruss Rated Rookie Tyler Herro card is seen as a popular option particularly with budget card collectors that are looking to get in on the action early. 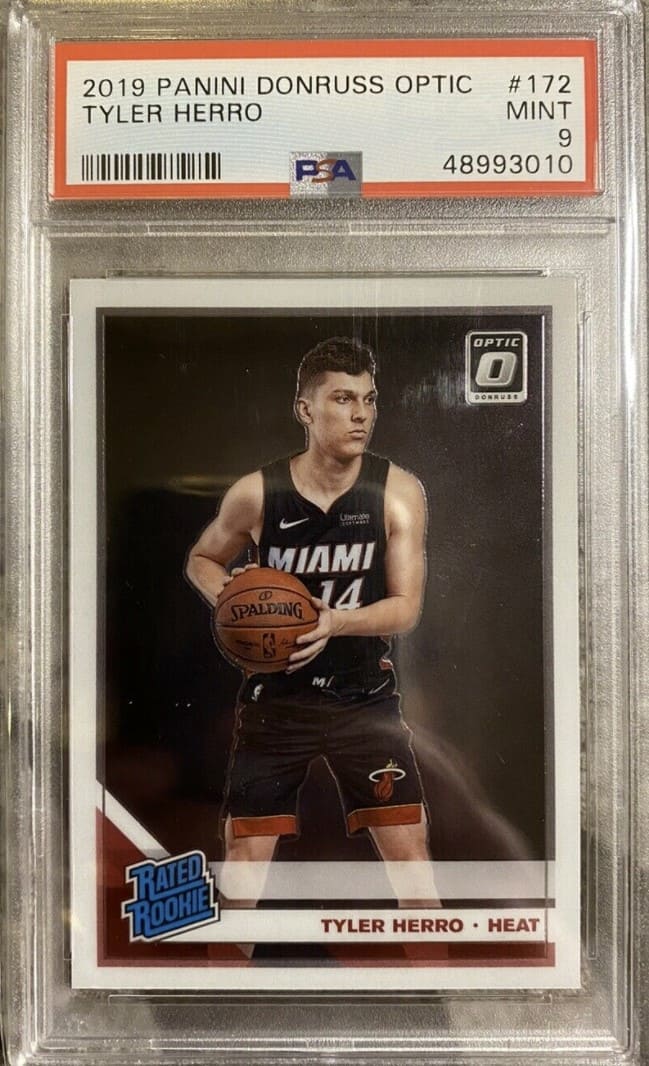 The Optic is also among the list of the most widely available rookie cards of Tyler Herro, and a great alternative to the Donruss base card.

Donruss and Donruss Optic are often mixed and confused by many collectors, but there are a few differences between the two that you’d notice straight away. Apart from the fact that they’re from different card sets, you’ll see that they have a different image on the card, and the Optic card is also of a bit higher quality.

However, as with the Donruss base card, the choices when it comes to parallels are vast.

You’ll have many different options here to choose from, as you’ll be able to go for some more colorful options to some shinier options that also tend to be rarer. Obviously, that is going to increase the costs of the card. 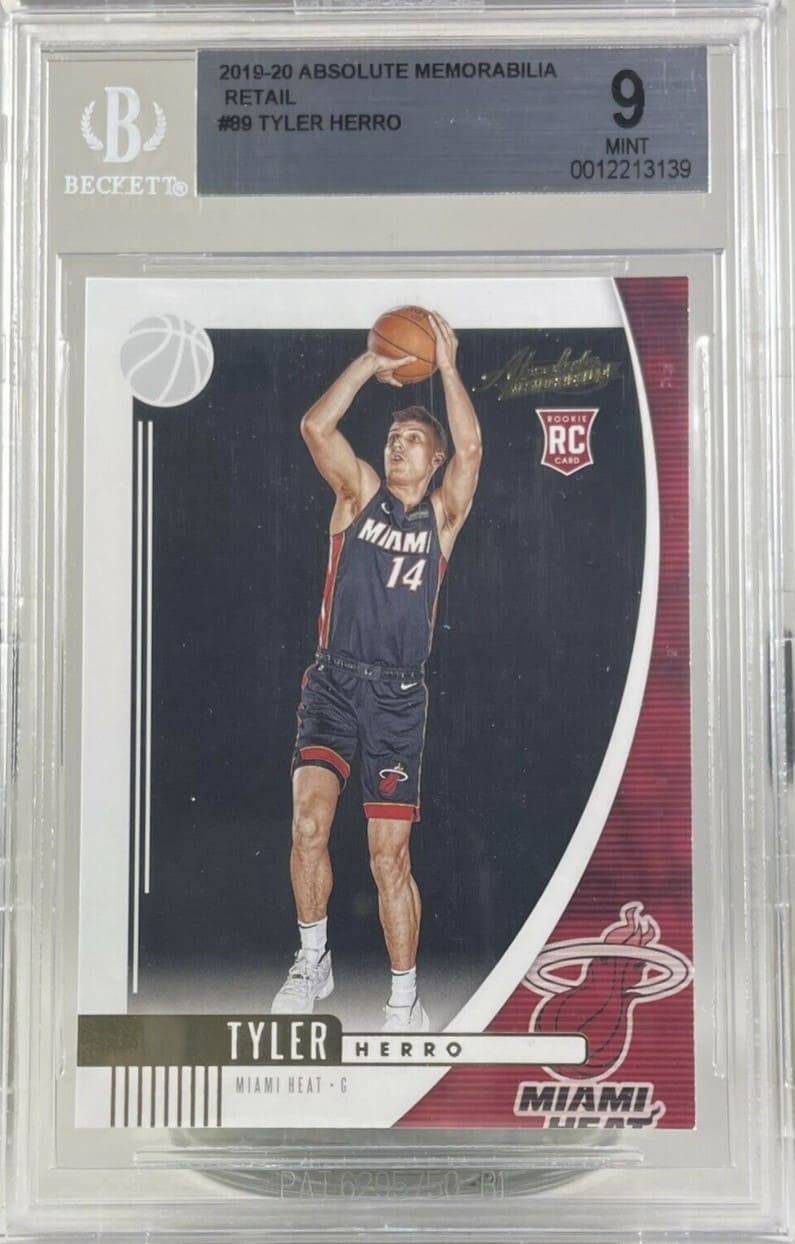 Absolute Memorabilia is a brand with a lot of history and it has a decent brand reputation, but this doesn’t mean that the card is going to come at a premium price.

In fact, it’s one of the most preferred options for budget card collectors thanks to its easy availability and lower prices. 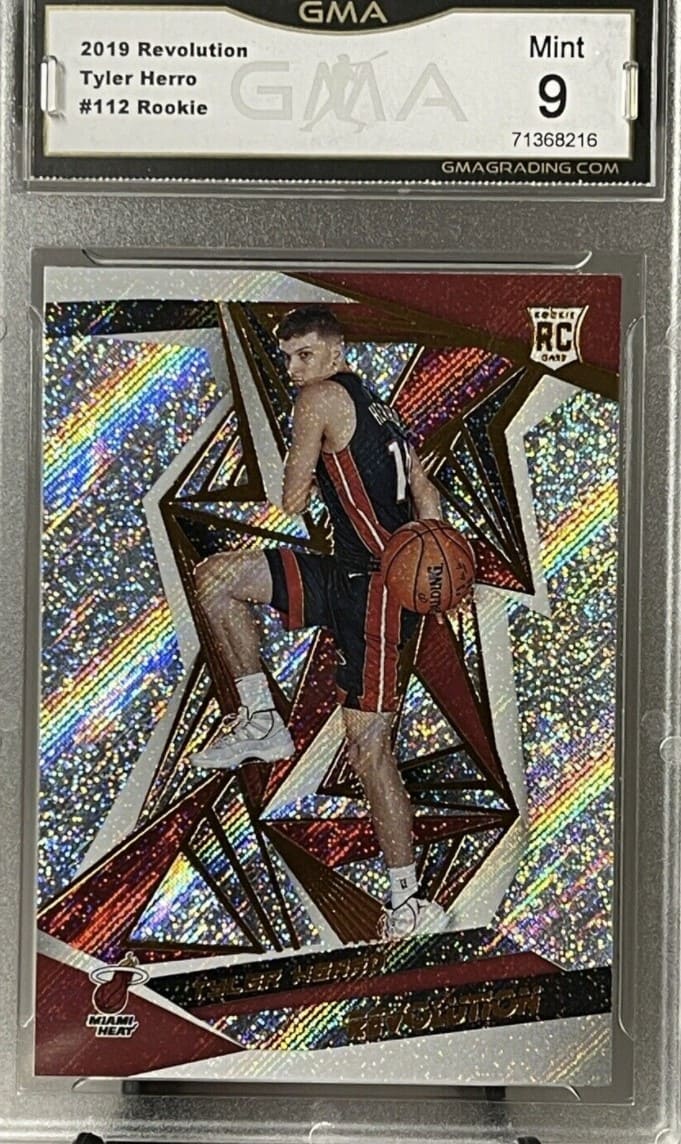 Now, the 2019 Revolution Tyler Herro might not be on the same level when it comes to popularity as the Donruss or Prizm cards, but it’s still a decent option if you’re looking for an entry-mid level Tyler Herro rookie.

Compared to most other cards we’ve featured so far, it’s one of the shinier options. If you prefer this style, then this card should be one of the top options on your checklist.

Another positive thing about this option is that it isn’t among the most expensive cards, so you should be able to get one quite easily.

And there’s also a great deal of variety with this card as well, with the many different variants of the card out there that will spice up your options. Just know that these parallels can cost slightly more than the base card. 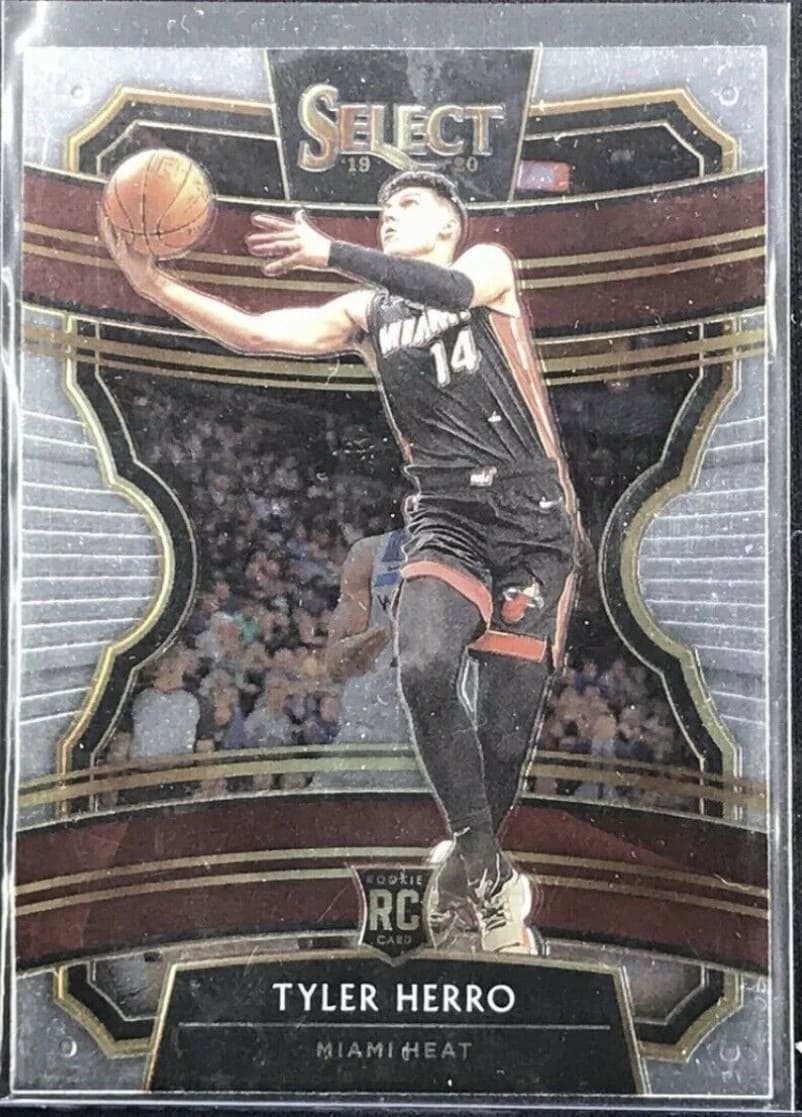 Select has long been one of the most widely available and popular cards for rookie card collectors. It’s also known for its high print run and easy availability while also bringing the powerful brand name to the table.

The Select card is also home to some of the most beautiful parallels that you can choose from, such as the Tie-Dye Prizm that you can see below: 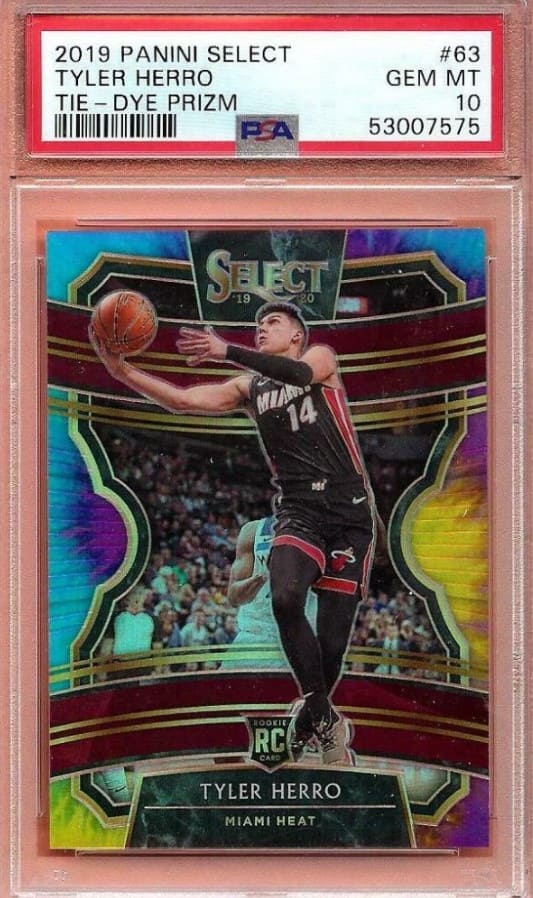 If you’re a budget card collector, then there’s even more good news: this card is not going to blow your entire budget, even if you go for some of the parallels that you might find. 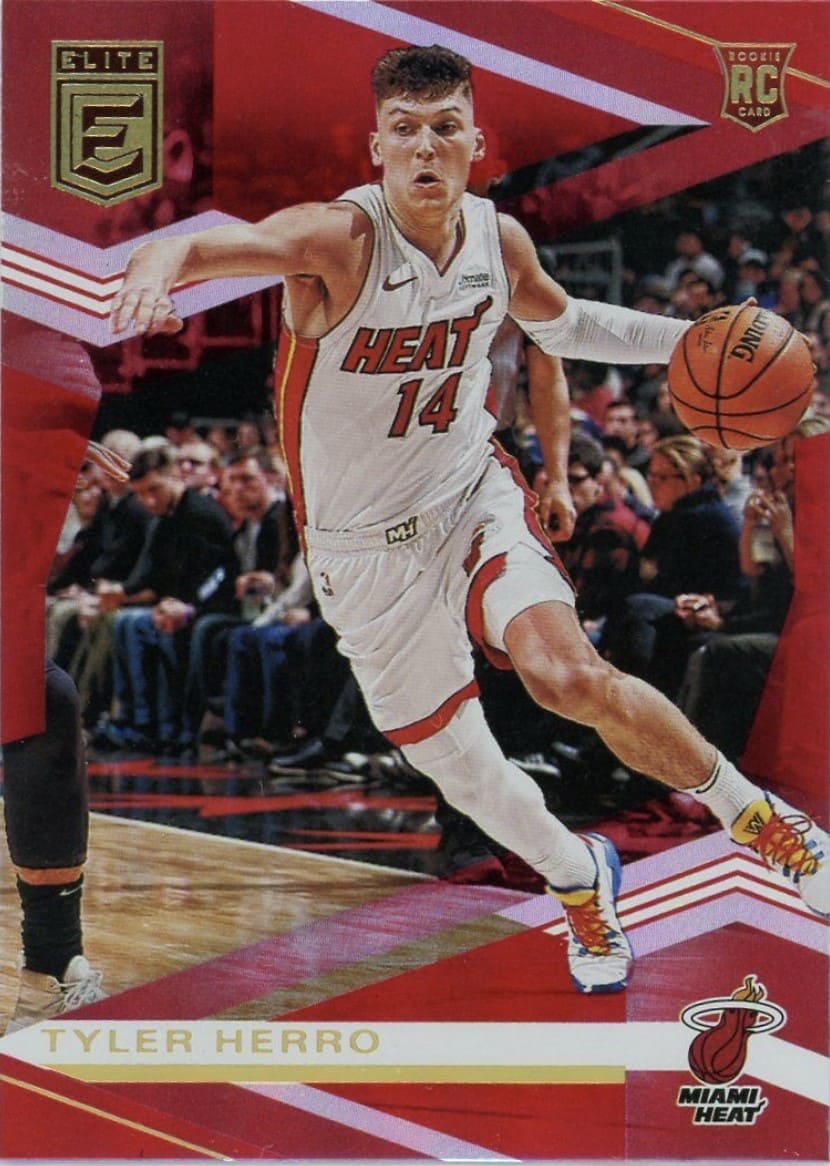 Donruss Elite has, without a shadow of a doubt, one of the best action images out of all the options you can go for. In fact, that’s always been the case with these Elite cards – they’re well known for their attractive appearance which is mainly thanks to their focus on the image.

This card brand is going to be one of the most widely bought options, however, it’s also not among the most expensive cards, so it’s going to be appropriate mostly for budget to mid-level collectors. 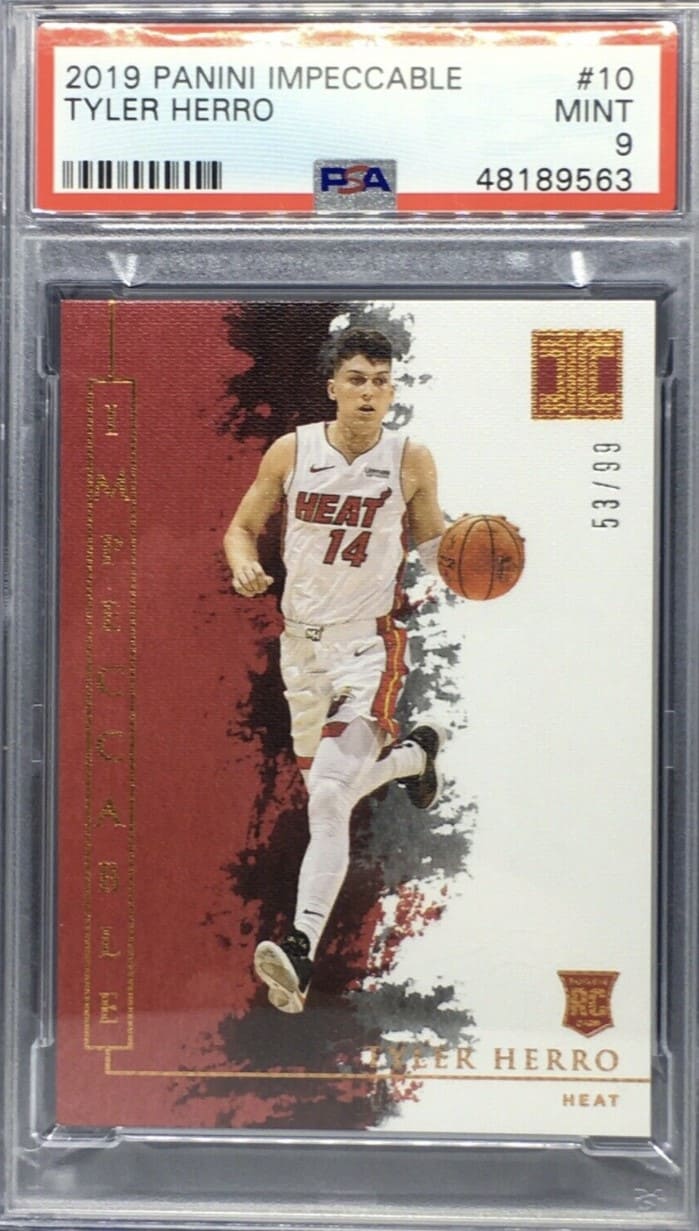 With Panini Impeccable, we’re slowly but surely moving away from the budget options into the realm of the more expensive options.

Now, the Impeccable brand is not considered to be a premium brand, even though it does have some characteristics that fall into that category.

Most notably, it’s the short print run of only 99 cards that is going to increase the value when compared to other budget options. Then you’ve also got the attractive, elegant design that attracts so much attention from many collectors.

There’s not a lot of parallels that you can go for, where you’ll only find a few, but attractive options. Silver, Gold, Holo Silver, Holo Gold, and Platinum will be your options when it comes to the parallels you can go for.

This card is going to be a great option if you like the slightly more subtle design of the card and the overall aesthetics of the Impeccable brand.

Crown Royale cards have always had a good following. They’re one of the most widely bought rookie cards, especially when it comes to highly popular options like Tyler Herro.

The main distinguishing feature of these cards is the die-cut figure of the crown, which presents a unique option when it comes to rookie cards.

While there may not be a good deal of variety when it comes to this card (it only has 6 parallels), it’s still a hugely popular card that is always going to have some value, so it might be a decent investment for the future as well. 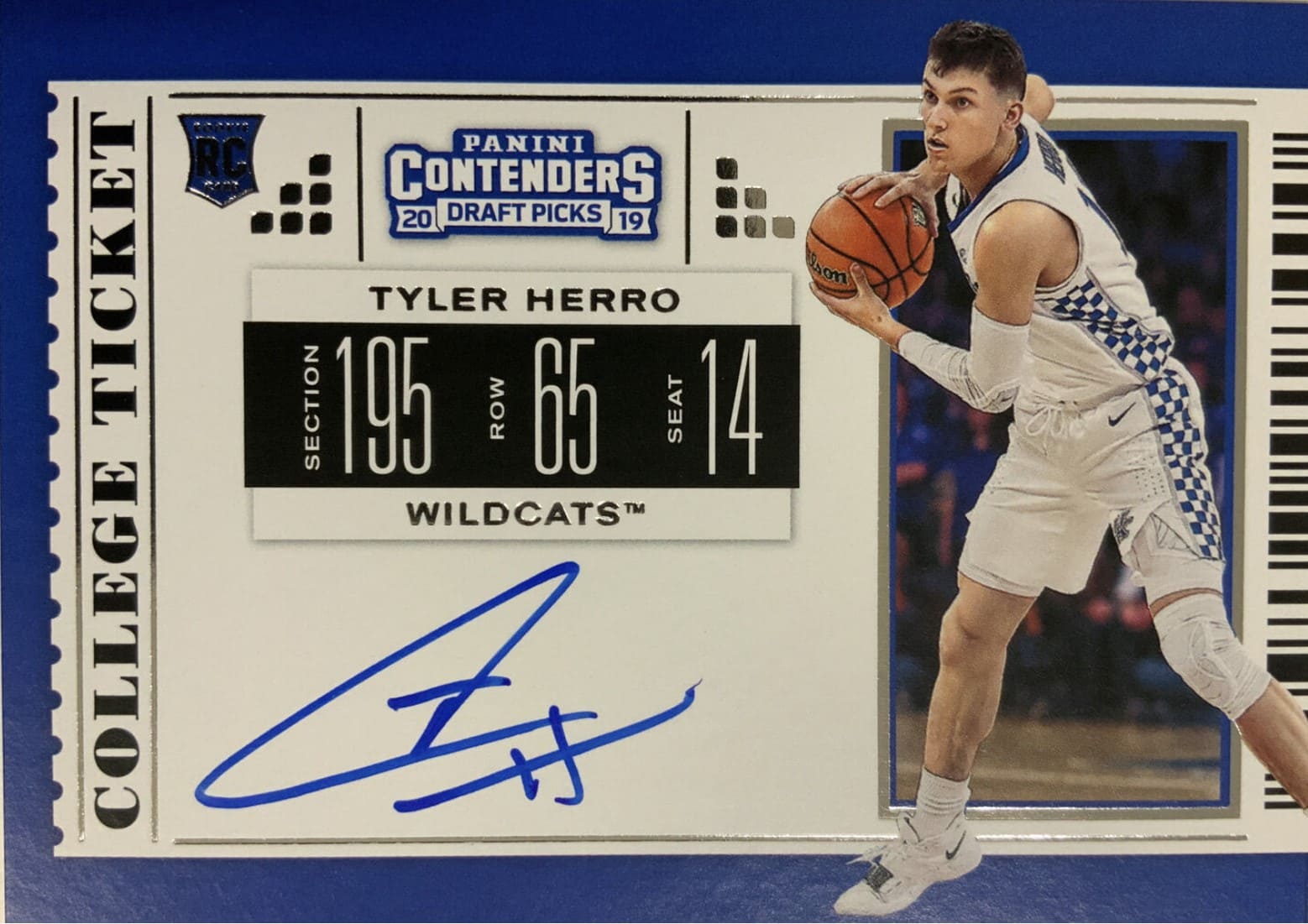 Panini Contenders Draft Picks is one of the most popular autograph options when it comes to Tyler Herro rookie cards.

You’ll get that typical ticket-like design with this card and of course, the on-card autograph which is so widely coveted by many people.

Obviously, all this is going to come at a price, which might not be as high as you might expect. This card can cost several hundred dollars up to several thousand, depending on the quality of the card, and whether it’s graded or not (unlike the one in the image). 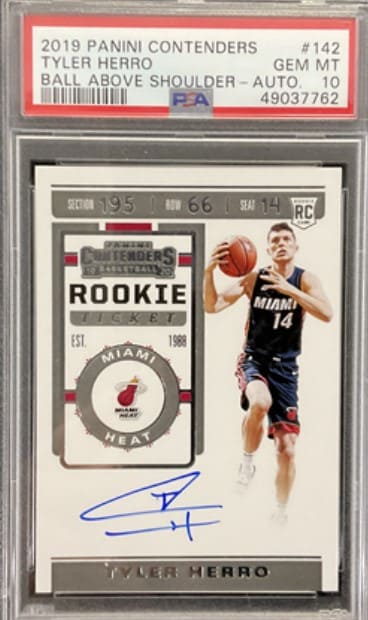 Now, the other option when it comes to Panini Contenders cards is his rookie ticket card, which also has the on-card autograph, but it’s slightly different from the Draft Picks card.

The color design is different, and the layout of the card differs largely from that card as well.

The prices for these two base cards are going to be quite similar, but the parallels for the Panini Contenders card (this one) are going to be usually much higher, as is the case with the Cracked Ice parallel seen below. 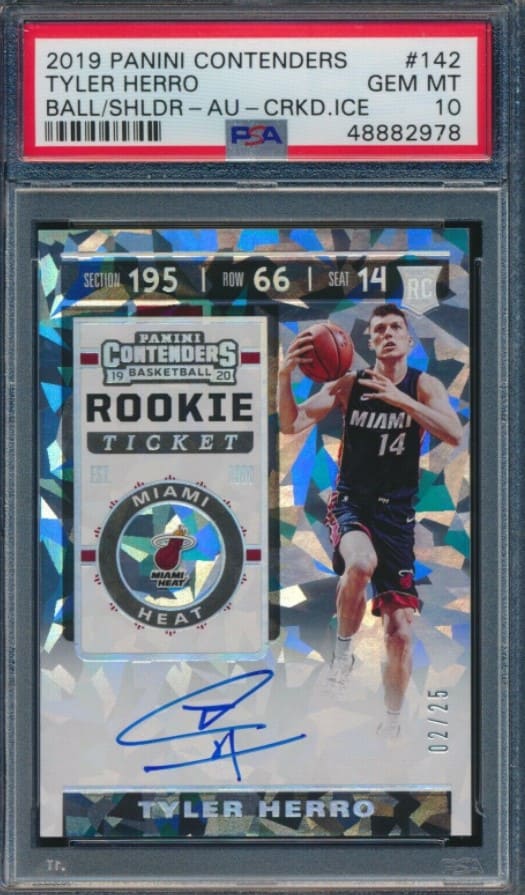 This particular parallel has only 25 copies to its name and is going to cost well into four figures if not five figures. 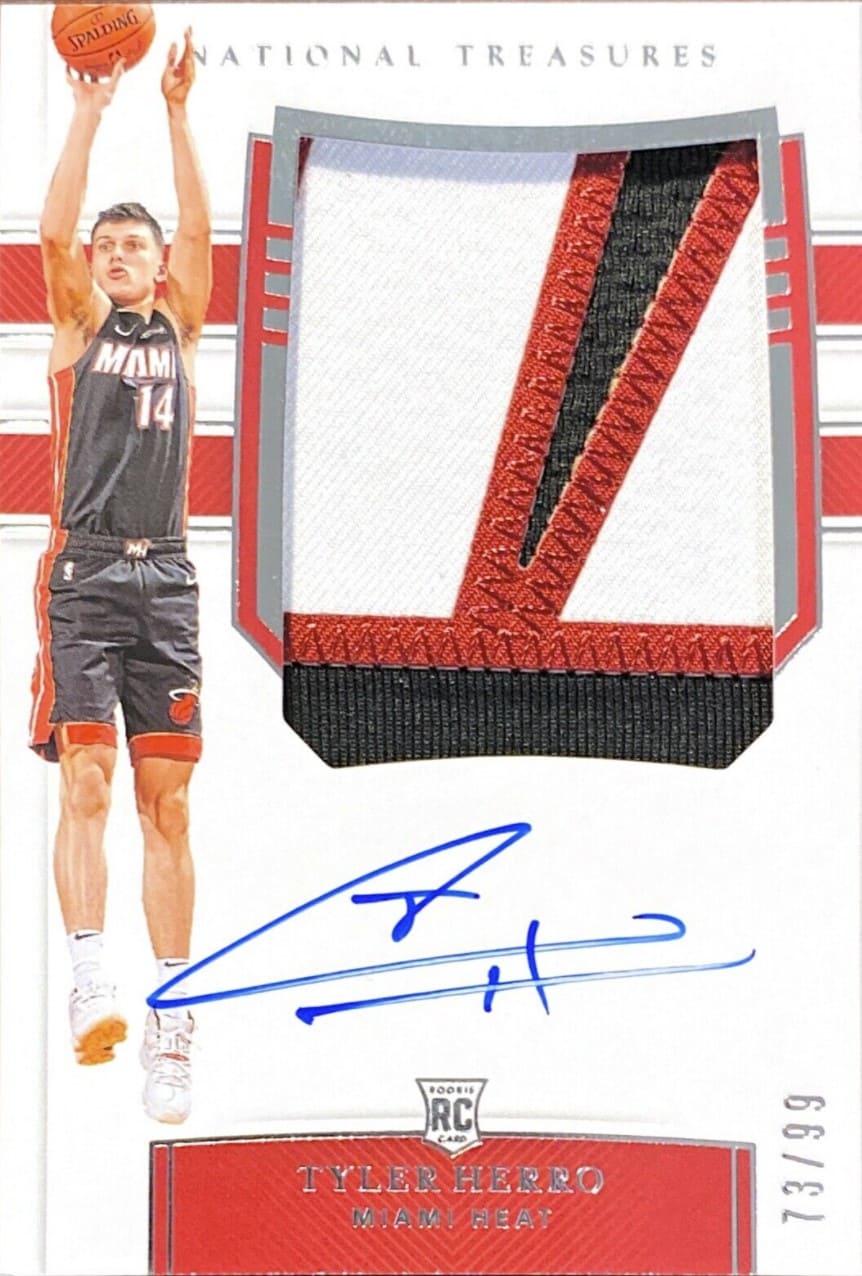 Lastly, we have the “big one”, the king of them all – the National Treasures Tyler Herro rookie card.

The main reason we say that it’s the king of all cards is that it has all the marks of a premium card, which is something that few (if any) other Tyler Herro rookie cards manage to do.

Firstly, there’s an on-card autograph, which is a very attractive option since the autograph is quite large and it spans almost the entire card. Then there’s the jersey patch, which is visible near the top of the card.

And with only 99 copies, this is also one of the rarest cards on this list. It’s also an attractive option if you want a card with an elegant, no-nonsense design.

All this is going to come at a cost, though. This card will cost you well into five figures and potentially six figures along the line. So if you can get on it early, you’ll still have a good chance of getting it at a sensible price until the prices start going through the roof.

Tyler Herro’s cards will always have an audience because he’s a hugely popular player, no matter where he plays. That said, it will depend massively on your preferences on which card you’re going to pick.

Some factors that determine your choice include:

With that in mind, hopefully, you’re going to be able to make a sensible option for your needs.