Collecting sports cards is the primary focus of our site, but occasionally, we also dive deeper into other types of card collecting.

If you’ve been collecting cards for a while now, then you probably know that sports cards aren’t the only type of cards you can collect.

You can find a wide range of collectables from the popular culture – from Star Wars, Pokemon, to Garbage Pail Kids, Mars Attax – the list is long.

In this article, we’re going to discuss some of the best non-sports cards to collect

To give you a better idea of what non-sports cards even exist, we’ve compiled some of the best cards that you can consider even if you don’t want to collect sportscards only.

Trading Card Games (TCGs) are super popular in the hobby, and while I’ll look into a few more this article – Magic, The Gathering is arguably the most popular, and the one that’s been around for longest.

The game is absolutely massive and has people collecting all over the world – many started by playing the game back in their youth and grew into collecting later on in life.

Read our article on rare Magic The Gathering Cards. 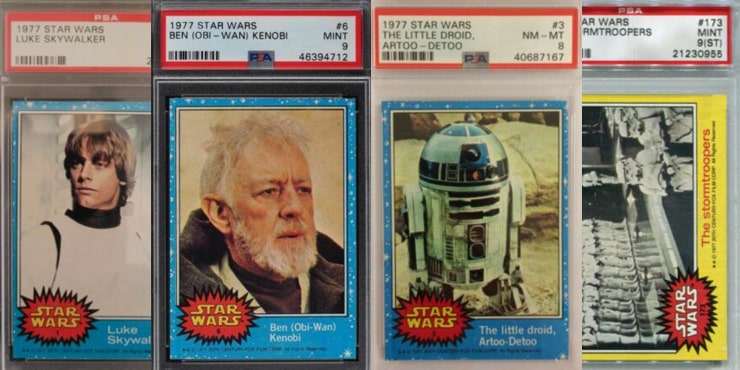 Star Wars is among the highest-grossing movie franchises in the world. The craze about these movies started all the way back in the 1970s when some of the first Star Wars cards were released.

1977 was the year when the craze started. The first set of these cards contained some of the movie’s most famous characters, like Luke Skywalker, Darth Vader, Princess Leia, and others.

The popularity of these cards was so huge that Topps had to release four additional sets of cards, in addition to the first set. The first set contained 66 cards, while the four subsequent sets also contained the same amount of cards.

Several Star Wars cards and series were released in the years after 1977, but none of them were quite as popular or successful as the original series.

Perhaps the most notable additions to the Star Wars universe were the following sets:

Overall, Star Wars cards remain to be among the most popular cards to collect for Star Wars in particular, but also memorabilia collectors and other movie enthusiasts in general.

GPK, or Garbage Pail Kids, has a long and successful history when it comes to collectables. If you’re an 80s kid, then you almost certainly remember these whacky and unusual cards.

They were designed to arouse the attention of kids. At the same time, some of the cards contained graphic elements, so not all parents were pleased to see their kids with one of these in their hands.

The cards were meant to be a parody of Cabbage Patch Kids dolls.

They basically took these dolls, transformed them into something unusual, evil, or even funny, and gave them a catchy name. All names were created so that they could easily be remembered, as they almost always contained the same initial letters – for example, Nasty Nick.

Now, the original set from 1985 still remains to be the most popular set. There were many subsequent sets and spin-offs, but the originals are still the most highly coveted and also the most valuable, especially in the best conditions.

Mars Attacks cards from 1962 are one of the most famous card sets in the history of this hobby.

These cards were created in 1962, and they presented a horrific story of the invasion of Martians on Earth.

The cards were created in such an order that they completed the story. It is a 55-card set created by the craftiness of Wally Wood and Norman Saunders.

Each card tells a part of the story. Many of them were also graphic and explicit in detail, which made some people skeptical about these cards at first. Remember, this was the 1960s when this sort of gore wasn’t yet widely accepted.

The story starts with a powerful Alien invasion on Earth. Humans are killed, captured, and tortured. Luckily, humankind prevails in the end. The Martian race is all but erased by the end of the story, so it does have a happy ending at least.

For the 1960s, these cards were very futuristic, you could even say they were ahead of their time. The attention to detail on these cards is apparent, and of course, if you love a bit of gore, then these cards are excellent.

Because of their controversial nature, they gathered a huge following as they were released. And they remain to be seen as some of the most legendary cards in history, with many collectors prepared to spend thousands on these cards if they’re nicely kept.

Almost any superhero will also have their own card, whether it is from the DC or Marvel universe. In general, though, Marvel cards tend to be a bit more popular.

The 1992 Marvel Masterpieces cards by Skybox are some of the most popular cards of superheroes out there. The 90s were particularly prolific when it comes to superhero cards, which is when the superhero genre really started gathering some pace.

This set contained some of the biggest superheroes in history: Superman, Captain America, Thor, you name it.

But this is by no means the only superhero set that needs a mention. There are countless sets that were released before and after this set that also bring a high level of popularity. It is merely the first big set that contained many of these superheroes in one place.

One of the most famous superhero sets is the Batman set from 1966.

This set is a classic. 1966 was the year when the Batman series was released, and it started a series of many more sets to come out.

These 1966 Batman cards were created after the characters in the movie. Some of them contained depictions of the main characters like this one in the image, while others contained some scenes from the movie.

Another famous non-sports card set of superheroes that needs a mention is the 1940 Superman set.

It is one of the earliest superhero sets, and they were added in bubble gum packs as a reward for kids that collected these cards. They remain to be some of the most valuable superhero cards even today, especially if they are kept in good condition.

The superhero genre of cards offers great variety, and you’ll be able to find cards of almost any character you love. 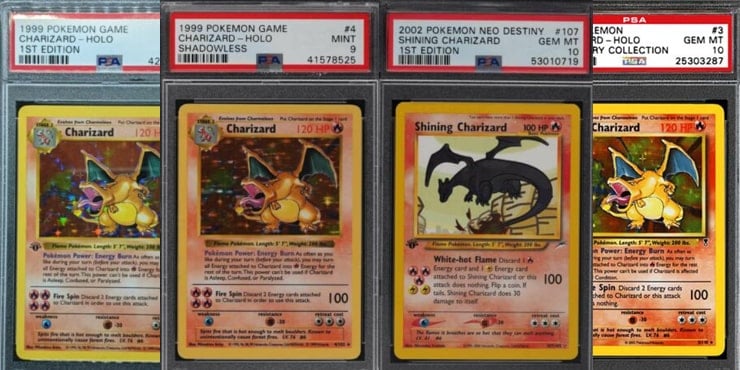 Pokemon cards are huge. If you happen to own a Pokemon card from the late 1990s, then the likelihood of it being a valuable card is quite high.

While finding cards that will cost high amounts is tough, you will potentially find something that would cost a few hundred bucks, maybe. So it’s time to open that old box of cards again and check if you have something of value.

Charizard, Mewtwo, and Pikachu are very popular, and if you own one of these from the first few editions, then you’re laughing.

Japanese cards are the most expensive, though. These cards that come from the earliest editions are very expensive and can cost several hundred thousand dollars. Some will even cost millions!

The differences between Japanese and American (or Canadian) versions are not very vast, but the main difference is that Japanese cards came out much earlier than American cards, which is why they tend to be a bit more valuable. They’re also tougher to find and much rarer.

Overall, Pokemon cards are hugely popular all around the world, and you can still collect them if you’re into Pokemon.

The world of TV shows has never been more varied and developed. And with the huge popularity of these shows, there has been an increased demand for other types of memorabilia, as well.

You’ll be able to find some great cards for your favorite TV shows. These are some of the most popular cards for TV shows that you might want to collect.

Breaking Bad – yes, even Breaking Bad has its own cards! This fan-favorite is one of the best shows in history. It’s loved by fans from all over the world. Whether you like Walter White or Jesse Pinkman, you’ll be able to find something interesting for your taste. And to top it all off, some of these cards even contain pieces of authentic wardrobe from characters that played in this series.

Happy Days – like we said, even if you like older shows, you’re going to find something you like. For example, you will be able to find cards from the 1970s show Happy Days. These cards were released back in 1976, but the show is still watched by many people around the world. Here’s a card of the fan-favorite character, Fonzie.

Simpsons – In 1990, the TV show Simpsons was at its peak in terms of popularity. This led to trading cards being released by Topps. Initially, these cards were sold in small 50-cent packs, but with time, these cards gathered a lot of interest as they stopped being produced. Today, you’ll be able to find many interesting offers on online marketplaces.

Star Trek – if we included Star Wars on this list, then we also must mention Star Trek cards. These are some of the most popular cards when it comes to movie shows, and you’ll be able to find them from various years. The most popular one is arguably from 1976.

Stranger Things – even if you love newer shows like Stranger Things, you’ll be able to collect some of the coolest cards out there. In 2018, Topps released Stranger Things cards, which depict some of the show’s most popular characters. You may still find these in excellent conditions, so if you want something nice that you like now and in the future, look for these cards.

Doctor Who – Doctor Who is one of the longest-running TV shows in the history of television. There have been thirteen different Doctor Whos in the past, and of course, each viewer has their own favorite. You’ll be able to find mostly autographed cards from these shows, and they’re meant to be cards that you can add to your collection.

Baywatch – lastly, one of the more interesting TV shows that also has its own card set is Baywatch. This was the show to watch in the 1990s, as it became popular all around the world. Many 90s kids will tell you that their childhood crush was Pamela Anderson mainly because of this show. If you want to relive some of the memories, you can collect these cards.

When it comes to non-sports cards, it’s best to keep an eye on the cards that you’d want to collect, and you shouldn’t look for cards that can bring you the most profit.

The prices of these cards will fluctuate all the time – sometimes, the prices can plummet overnight if something was to happen to a show you watch or the cards you own.

So the best thing with these cards, in my opinion, is to collect and own something you won’t regret owning even if the prices drop.