These are the best Ja Morant rookie cards every collector should be aware of. 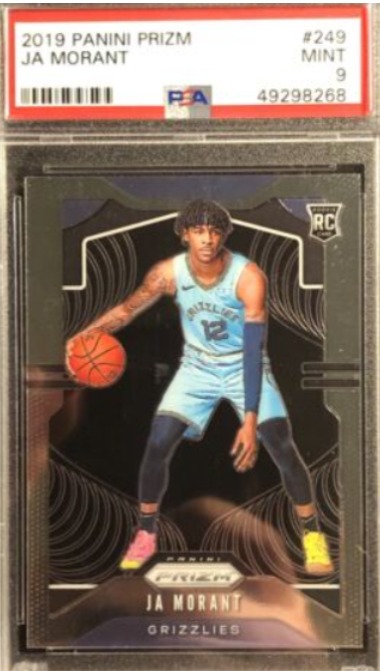 It’s an excellent opportunity to get yourself a good ROI if you manage to jump on the wagon at an early stage. The card has Morant scanning the open field to make a pass to a teammate on a black background with some silver-white graphics included.

The base version of this card is widely available and it will probably be accessible for most casual collectors, even those on a budget. But perhaps the most appealing thing about this card is an absolute army of parallels and additional variations to choose from. 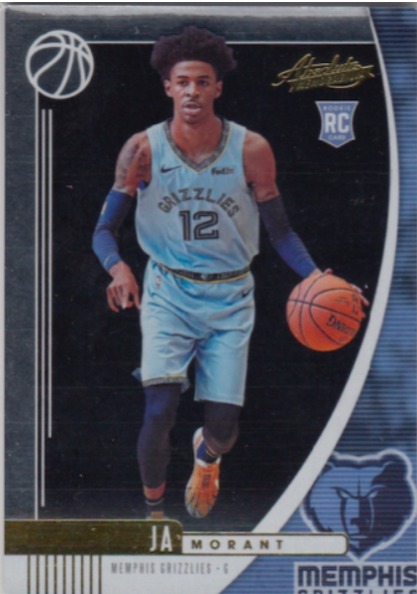 The Absolute Memorabilia rookie card of Ja Morant is very easy to pull if you buy the pack. The base version of this card has a white background with white bordering, while other parallels have their own colors when it comes to the border (this particular one in the image is the silver foil parallel).

This Absolute Memorabilia set is really well done. It has a sleek design and it will probably fit very nicely with the cards that will come out in the future. It has this universal design that will probably age quite well, so it’s a good investment, for certain.

You can also consider some of the parallels of the card, which include Red, Blue, Orange, Purple, Gold, Green, and Black. 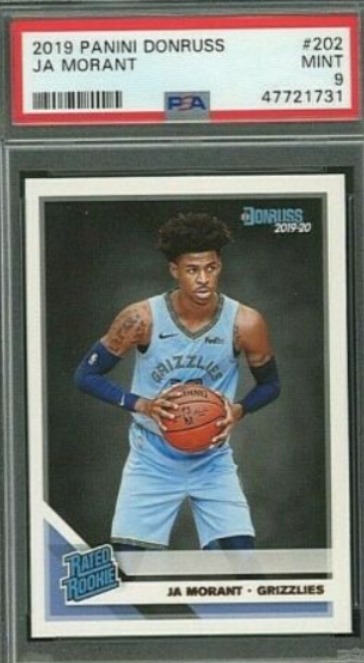 Get the 2019 Donruss Rated Rookie card of Ja Morant if you’re looking for a sensible initial investment and you’re willing to let it sit and grow in value. It’s a widely available card, this one, and you probably won’t have to pay a lot initially – but you’re looking at a good ROI with this Donruss card.

There’s nothing special about the card – it features a similar design to what other Donruss cards of the previous years have looked like. On the base card, you’ll find Ja with the ball in his hands on a silver-black background. The back of the card has Morant’s brief description and his stats – everything that you’d come to expect from a Donruss card.

The parallels of this card are an appealing factor for the perfectionists – but know that you might not be able to get some of the parallels, like the Black Infinite one which is limited to only one copy. Other parallels are more widely available, and some of them include Green Flood, Holo Green, Holo Orange Laser, Infinite, Silver Press Proof, Holo Blue, Holo Green, Holo Red, and many others. 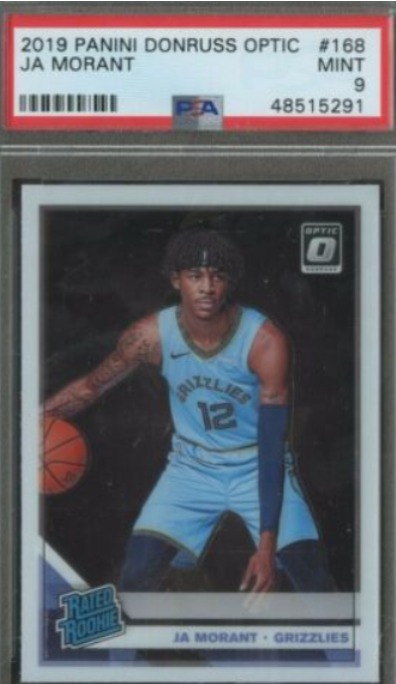 Donruss Optic Rated Rookies cards are certainly among the most popular cards for casual collectors. Many people love them for their easy availability, affordable prices, elegant design, and good ROI.

This Ja Morant rookie card is no different. This card with the image of Morant dribbling is by far the more common of the two variations – the other variation of the #168 card is with the ball in his hands at shoulder height. That one also has a signature to it, so it’s a bit more expensive and hard to get.

Again, this Donruss Optic card is loved for the great variety it presents to collectors. Not only does it have two variations of the base card, but a massive library of parallels, too. Some of those can fetch several thousand dollars, especially if you’re able to get one of the rarer parallels. 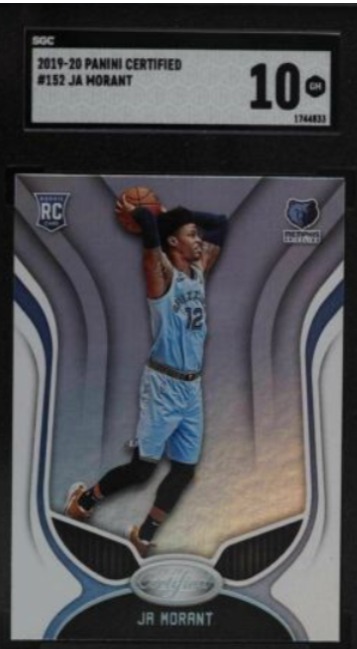 The Panini Certified card belongs to the “mainstream” category if we may call it that, as it’s widely available and probably affordable for most collectors – the base card, at least.

But if you’re looking at some of the parallels, you might need to be prepared to spend a bit more. For instance, the red parallel is one of the more common parallels, and it’s quite significantly more expensive than the base card.

This card is known for its Mirror parallels, which include the Mirror Blue, Red, Orange, Camo, Gold, Green, and Black. The black one is the rarest as it only has one card to its name, while the green one only has five. 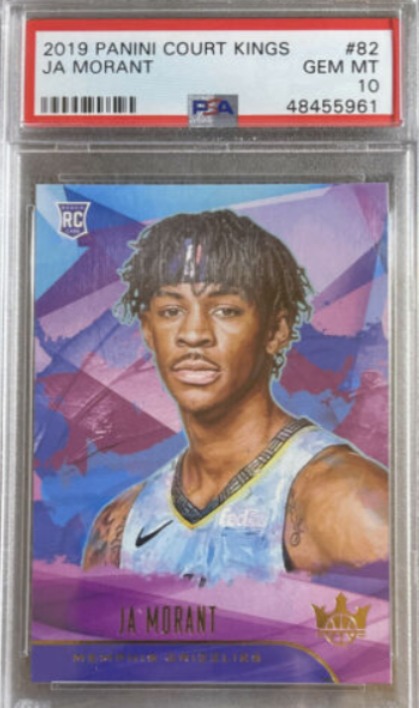 With the Court Kings card, we’re moving into the mid-tier category, although it’s still one of the more widely available cards. This card only has the base card, and it features the typical design that we’ve come to expect from Court Kings cards.

This symphony of background colors gives the card an artsy feel. In the midst of the colors, there’s a frontal image of Ja Morant, which some collectors who prefer action images might not appreciate, but it fits very nicely with the overall design.

This card has potential for the future. It’s a bit more expensive than most other base cards we’ve featured so far, but then again, it should not be too expensive even for those on a budget – this card will cost you several hundred dollars at most. 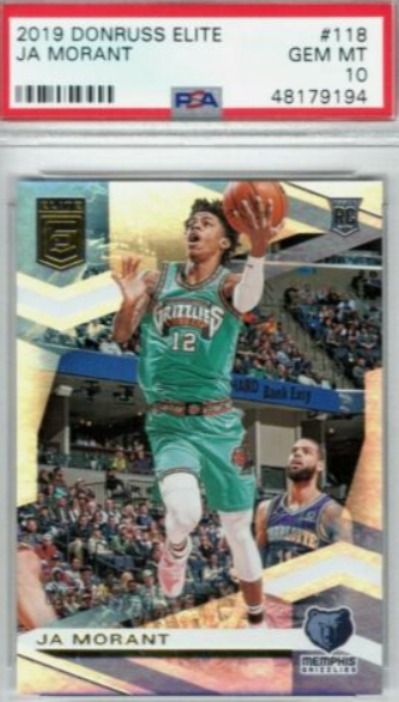 Elite cards have captivated the hearts of many collectors with their clean design, and this one’s no different. It has perhaps the best image of Ja Morant you’ll find on any card, attacking the hoop in style, while the crowds are clearly visible in the background. This design is a constant with the 2019-20 Donruss Elite card set, although they were not as action-oriented in the past.

The base card is a bit more expensive than most other standard options like Donruss or Donruss Optic – it’s caught somewhere between premium and standard cards, making it a good proposition for mid-tier collectors looking to catch that card with an amazing ROI! 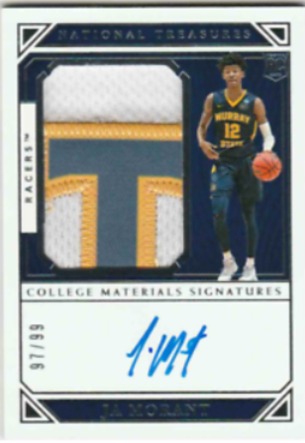 We’re clearly into the premium territory with the National Treasures card, and even though it might be a big investment initially, it’s still a great long-term investment if you have the patience to invest heavily at the start and then wait for it to grow.

You’ll be able to get everything you’d expect from National Treasures cards – an autograph, a patch of his jersey, and a nice and clean design, as well as an action image. These cards are expensive, sure, and you’d be lucky to pull it out of a set – but those who are willing to invest early will be rewarded, for certain. 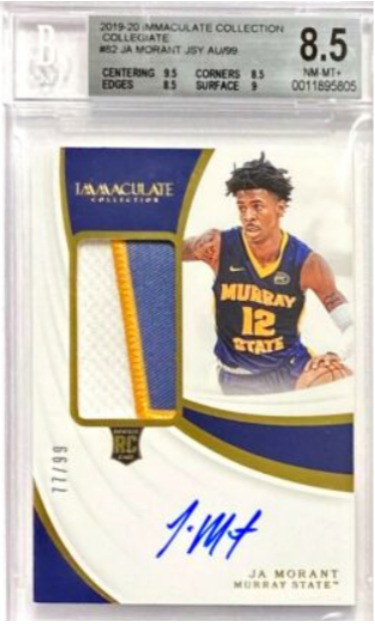 The Immaculate Collegiate card can go head-to-head with the National Treasures card in terms of design and price. It has all the same features, including an on-card signature, a patch of his jersey, an action image, and an elegant design.

It should be on your radar if you’re a big-time investor and if you have several thousand dollars ready to be invested. You can get it for your personal collection if you’re a Grizzlies fan or Ja Morant fan – or get it in order to take advantage of its high selling potential. 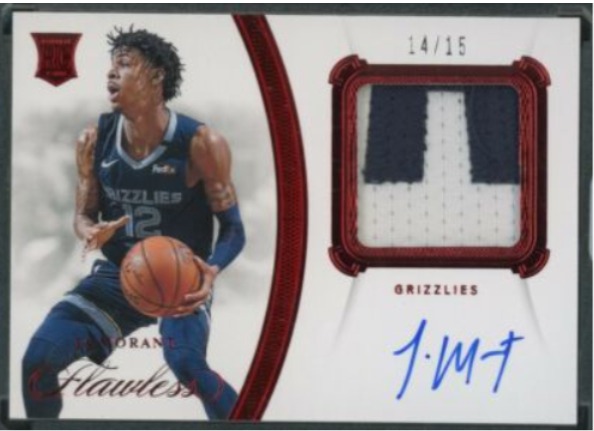 Rounding off the list is the Panini Flawless card, which is perhaps the most expensive Ja Morant card that’s commercially available. It’s one of the most-watched cards on the marketplace, and it has several different variations to its name – this particular one, the Ruby variant, only has 15 cards.

Again, there’s this typical premium design with the autograph, a patch, and a nice image of Ja Morant in a Grizzlies jersey. This is one of the main differences between this card and most other premium cards – Morant’s wearing a Grizzlies jersey instead of his Murray jersey, which is seen on the National Treasures card.

This one’s among the most expensive Morant cards currently out. It’s also scarce, as there are only 15 of these on the marketplace, and you’d have to be pretty quick to get one because many people are looking to hop on the train and get it.