The Greek Freak has some epic cards for you to look at, but we’ll start with the most valuable ones and then move down the list to more affordable ones. 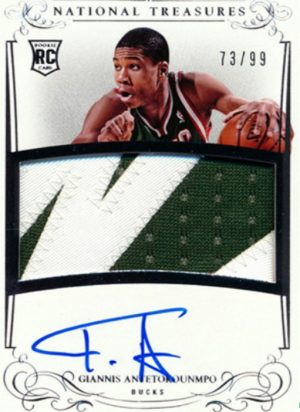 Panini National Treasures cards are a treat. They are considered as the premium cards for those collectors who can afford to throw several thousands of dollars at cards. They come with an elegant design where they feature a player’s autograph and a patch of a player’s match-worn jersey.

This Giannis Antetokounmpo rookie card is no different. Compared to most other Giannis cards with patches of jerseys, this one has a much bigger patch of his jersey right in the middle of the card. It’s quite obvious that it’s the central feature of the card.

Below the patch, you’ll find Giannis’ autograph, his name, and the team he plays for (Bucks). Above the patch, there’s an action photo of the player along with the serial number of the card – only limited to 99 cards. The entire card is rounded off by a nice sleek design that’s bound to turn heads. 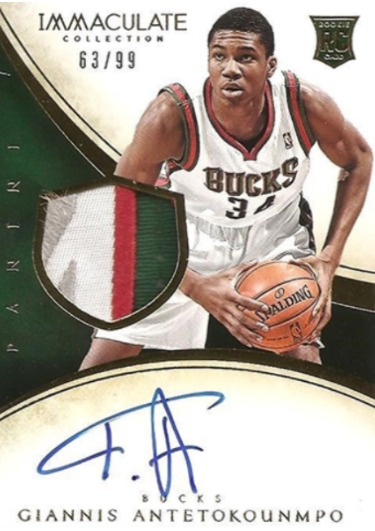 The Immaculate Collection card of Giannis is the direct competitor to the Panini National Treasures card. In essence, it features a similar type of design, although there are some fundamental differences between the two.

Both cards had a run of 99 prints, so it’s equally as rare as the National Treasures card. But the Panini cards tend to be preferred because of the larger jersey patch on the card. The good news here is that Immaculate has a parallel called Premium Patches (only 25 copies) which features a larger match patch. The downside is that it’s expensive.

The base card has everything you’d want from a premium rookie card of a franchise player like Giannis. It features an autograph on the bottom of the card with the player’s jersey patch in the middle of the card, as well as an action photo of the player.

There’s another parallel that we need to talk about with this card – it’s the Jersey Number parallel, also called the acetate card, which has only 34 cards. This means it’s going to be extremely expensive, and hard to find. 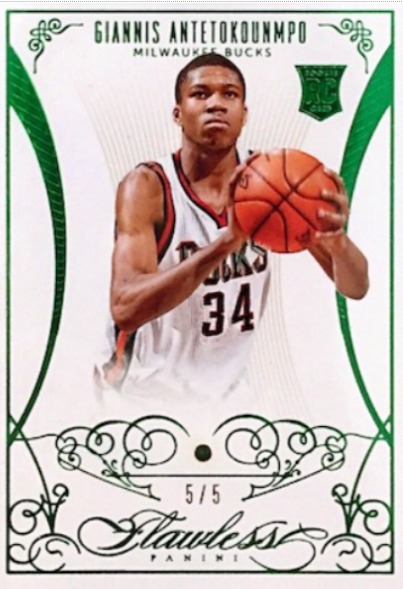 Right, let’s move on to the Panini Flawless Giannis card, which is widely considered to be one of the best looking cards on the market. It’s a premium rookie card, although it doesn’t have an autograph, which means it’s not as valuable as the National Treasures or the Immaculate cards – it’s not that far behind them, either.

This Panini Flawless card is limited to only 20 copies (the diamond version), which means it’s among the rarest Giannis rookie cards. The distinguishing feature of the card is the diamond piece that’s embedded right in the heart of the card – the parallels (Ruby, Sapphire, Emerald, and Platinum) have this same feature, only with different materials.

So it has something different to offer to collectors, despite the fact that it doesn’t have an autograph. But if you really want to have an autograph, you can go for the parallel card which will cost a bit extra, but it’s worth it if you have a thing for on-card autographs. 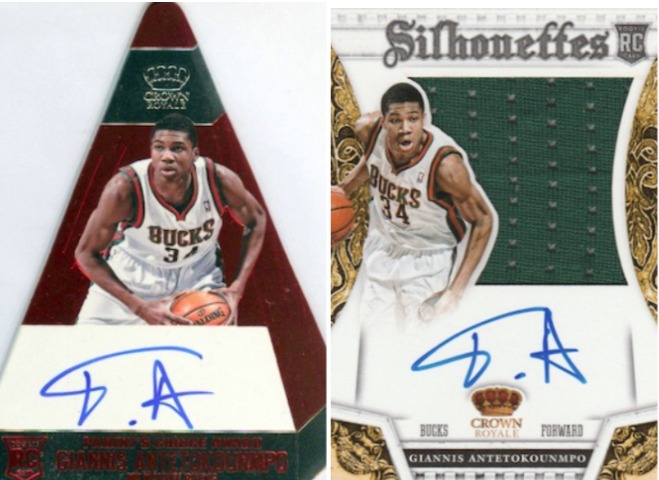 The Preferred 2013-14 cards are a bit unique. They have several different versions, although the base card that’s found in the original autographed set is the one that Giannis fans will cherish the most.

There are three main choices when it comes to the Preferred cards: all of them are issued by Crown Royale, although there are different variations to it. For instance, for the Panini’s Choice card (#116), it is typical to see the pyramid-like design of the card which includes the player’s autograph.

The Crown Royale version (#246) features that typical crown-like design that we’ve seen so many times from Crown Royale cards. Last but not least, you’ll also be able to choose the Silhouettes version (#380), which features an autograph and a patch of the player’s jersey. You’ll have plenty of choice with this particular version of the card. 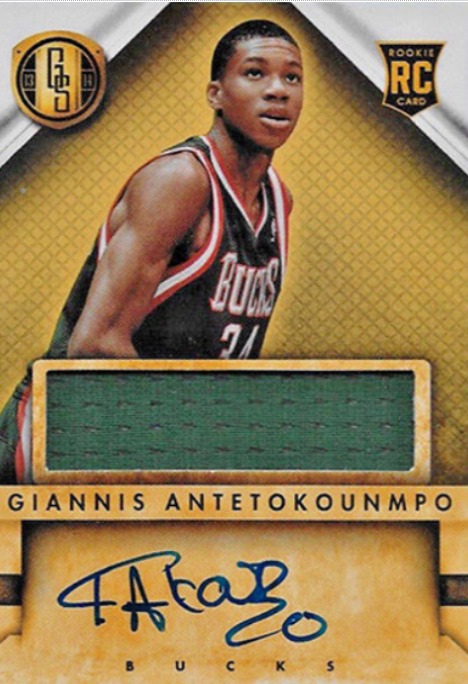 The Panini Gold Standard is perhaps among the more affordable premium versions – at least when compared to some other premium cards we’ve just featured. But it can still cost quite a lot, but if you like its golden shining design, then it’s a worthy investment.

A card like this will always sell, but you might have a tough time finding it for a good price. Early on, this was perhaps one of the easier available premium options – today, the demand is great for it but there are not that many listings. If you want something even rarer, you can opt for one of the parallels – Platinum (10 prints) and Black (1/1).

Perhaps one issue that some premium collectors might have is that it’s not serial numbered, like the Panini National Treasures cards, which add a bit more character to the card. 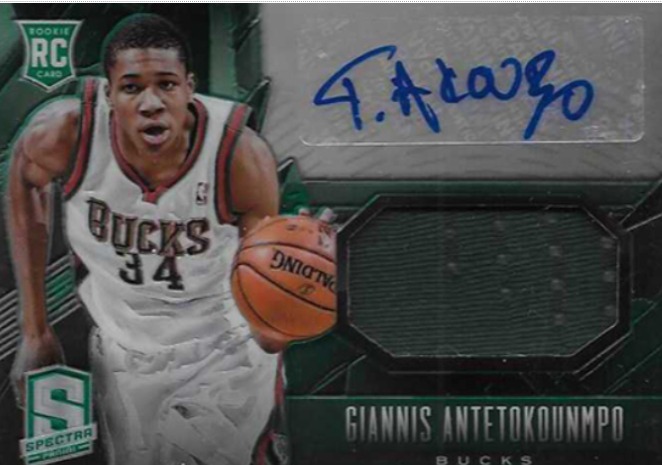 It has everything you’d come to expect from premium cards – an autograph on a sticker, which can be seen from both sides, as well as the match-worn patch of the jersey. It’s still a valuable card, although among the more “affordable” premium cards – at least the base version.

Its parallels can still collect larger sums of money, though. These include Rookie Jersey Autographs Prime, Prime Ruby, and Tag Autographs. 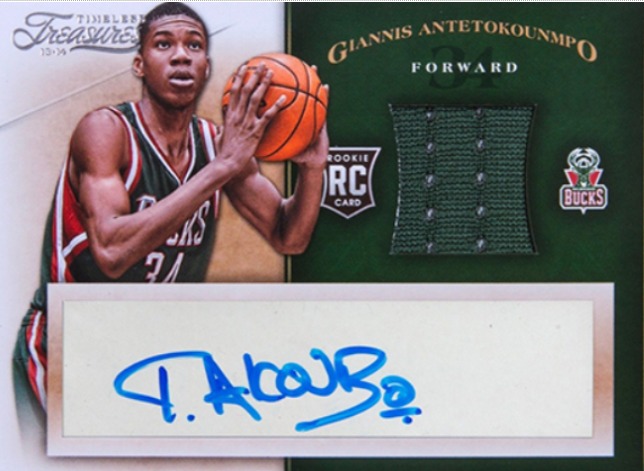 The last card we’ll mention in the premium category is the Panini Spectra card. This would have been one of the best premium cards if not for the sticker autograph on the top section of the card.

It’s a bit cheaper than most other premium cards with a similar type of design. It’s still a pretty card, as it nicely combines the green color with white and Giannis in the Bucks’ white jersey. There’s also a piece of his jersey on the card and the already mentioned autograph on a sticker. 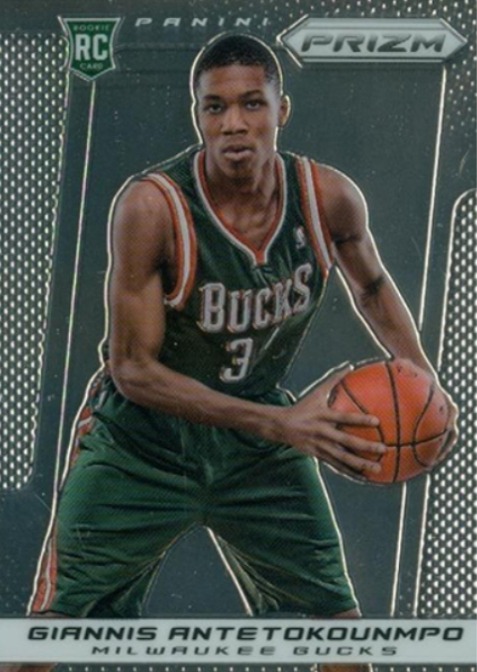 The Panini Prizm Giannis rookie card is probably the one card many collectors think of when we talk about the rookie cards of this player. It’s one of the most widely available cards, meaning that it shouldn’t be that hard to come by.

Even though some of its parallels (Silver Prizms, in particular) can collect several thousand dollars, the base version of the card should available even for budget collectors. If you’re a completist and you always strive to collect as many cards as possible, this one should be your go-to card.

It has many different parallels, such as Prizms, and its many color variations – Blue, Red, Green, and White. Then there are many rarer parallels to be had, such as Blue die-cut, orange, purple die-cut, gold, Industry Summit (5 cards), Prizms Black (only 1), and Prizms Black Mozaic (1). 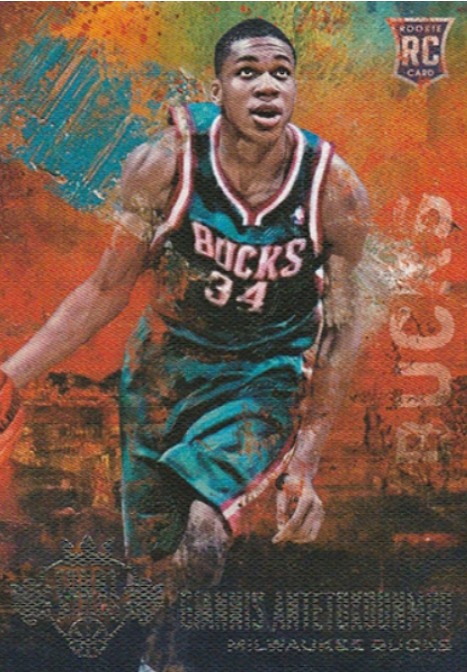 Speaking of conventional rookie cards, the Court Kings definitely belongs in that category. This card has a bit of an artistic feel to it, and there are several variations of this card – although the one in the image is by far the most conventional one.

It should be plentiful on the aftermarket, even today. You can get it for a reasonable price, although you might have to spend a bit more for a well-kept card. In our opinion, it’s worth it though, because these will only grow in value for many years to come. 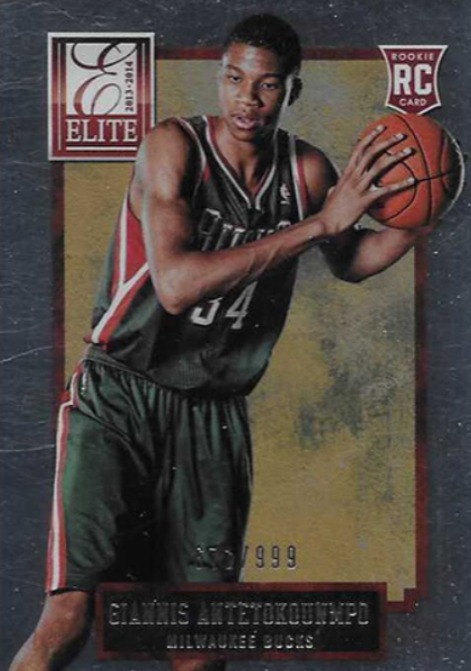 Again, this is also one of the standard options when it comes to Giannis Antetokounmpo rookie cards. It’s perhaps a bit more elegant and classier than the Court Kings card, but it’s also limited in value – 999 of these were printed, which will help its value.

Ultimately, it comes down to personal taste. If you want something that might have a bit of a premium taste to it, then you can opt for this Elite card, as it’s serial numbered.

Other standard and more widely available rookie cards of this player also include: