In 2015, Devin Booker was drafted by the Phoenix Suns as the 13th overall pick in the draft.

Initially, there was quite a lot of hype for the Book, as he was seen as one of the best prospects from the draft. His rookie cards gathered a lot of attention in 2015.

The good news for everyone that wants to own a Devin Booker rookie card is that his cards appear in more than 20 different sets.

There’s quite a lot of variety that you can choose from, even if you’re on a budget, or if you are more of a premium card collector.

In this article, we’ll show you the best Devin Booker rookie cards you can get depending on your preferences and your budget.

Let’s start with the most common and most popular rookie cards and then move on to the more expensive and premium options. 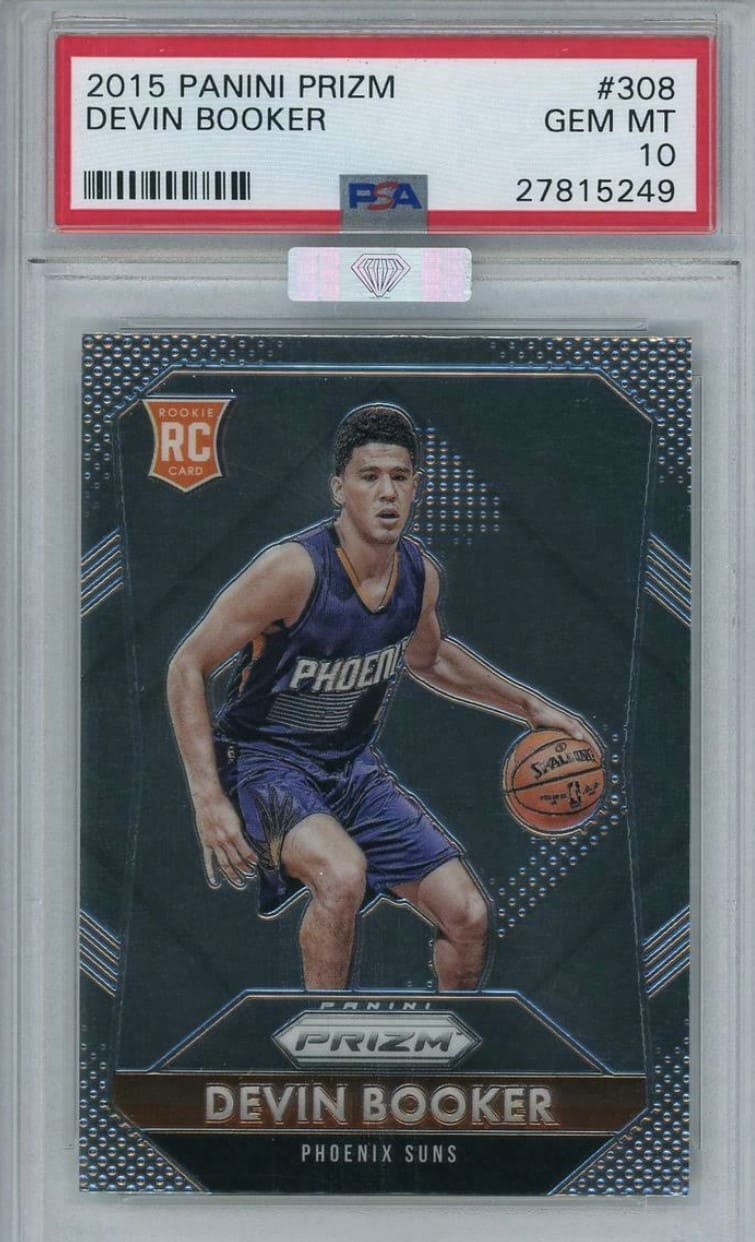 Panini Prizm has always been one of the best card brands for rookie cards, and due to several reasons.

Reason #1 is that these packs had a big print run, so they were quite easily available at the start. You will have no problems finding this card even in the best conditions possible, but know that the top-graded cards will cost much more.

Secondly, Panini Prizm as a card brand has a good reputation for reliability. These cards will age well in the future, and they are likely to gain value as years go by, which is why so many card collectors invest in these cards.

Lastly, variety. There are over 15 different parallels for this card. The rarest is the Prizms Black card, which only has one copy to its name.

Panini Prizm is one of the best investments when it comes to Devin Booker rookie cards, especially if you’re not prepared to spend a massive sum of money. 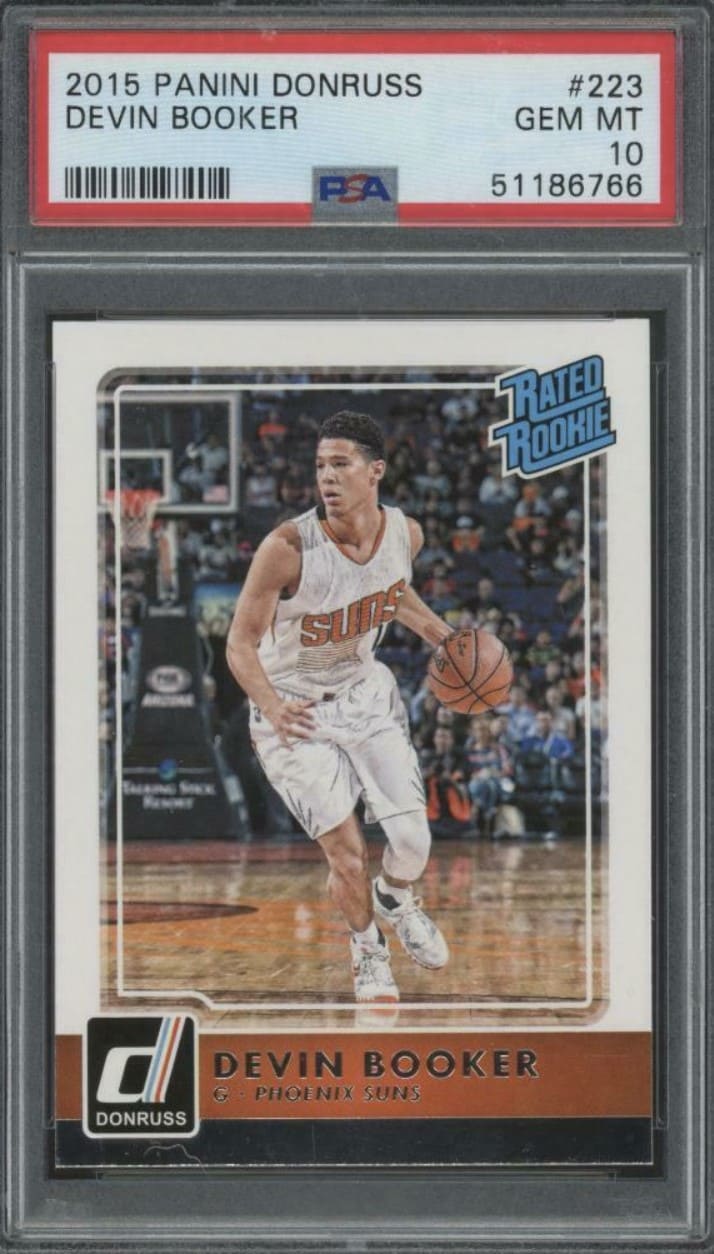 Similar things can be said about this Donruss Rated Rookie card as of the Panini Prizm card. Good availability, decent card brand reputation, and great potential as an investment.

You could even argue that this card looks better than the Panini Prizm card. It has a live court image, which makes this card feel like it’s alive.

It’s also a good option if you don’t want to overspend.

Don’t forget that this card also has some nice parallels to choose from. The most common one is the Holo parallel, which has 199 copies. 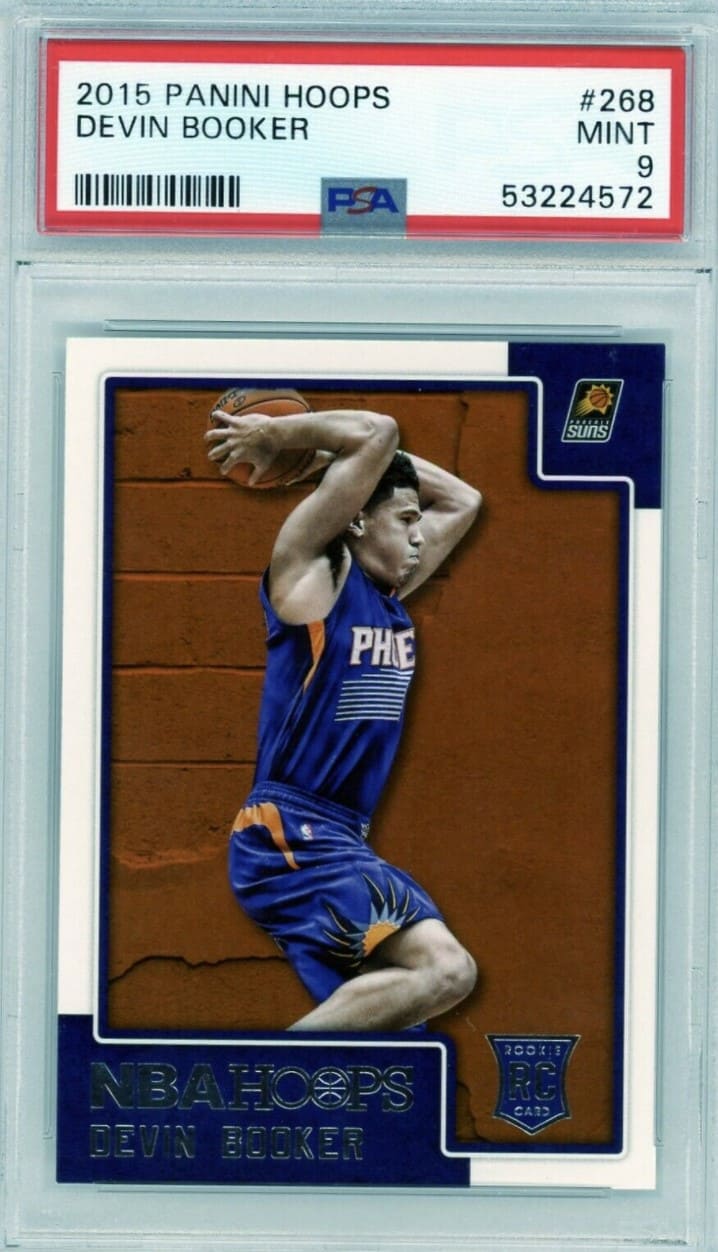 NBA Hoops has a long tradition when it comes to basketball rookie cards. It’s likely to continue to be one of the main companies for budget cards in the future, as well.

Out of the three cards we’ve featured so far, the NBA Hoops card is perhaps the cheapest one. So if you’re looking for a good budget option, then you just can’t go wrong with this one.

Availability should also not be a problem, so if you’re looking to jump into this card, then you’ll be able to find a card for your money for sure. 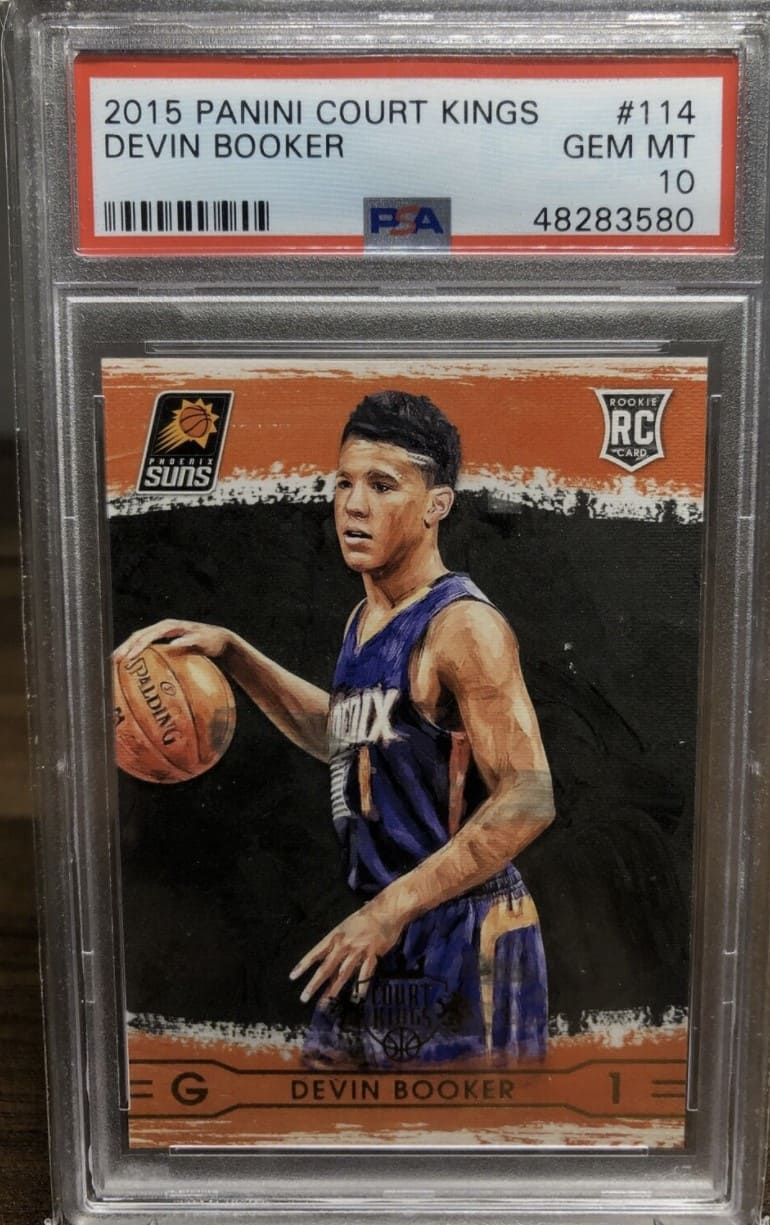 If you’re after something a bit more artsy and colorful, then the Court Kings Devin Booker card won’t disappoint.

We’ve seen even more colorful cards come out from Court Kings, but this one from 2015 is not shabby at all.

If you like the card to have a design that matches the team of the player and the overall vibe of the card, then this card nails it. The orange illustrations on the top and bottom of the card fit the Suns’ franchise colors well.

The card is easily available on online marketplaces such as eBay. You’ll find many graded and ungraded cards of this type. If you go for an ungraded card, make sure that you examine its condition closely. 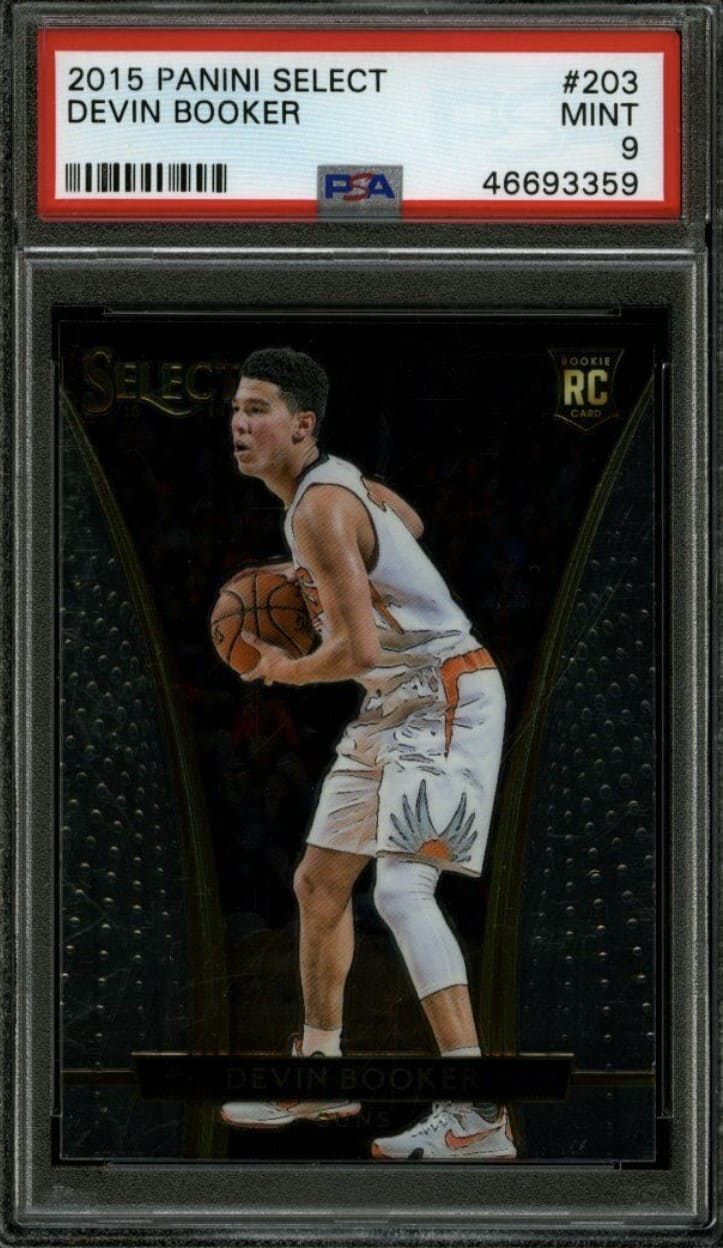 The Panini Select is on the same level as the above-mentioned cards, but it’s the parallels where it’s at with this one.

You’ll find a whole host of choices. If you want something a bit more colorful, then you’ll like what this card brand has to offer when it comes to parallels. The rarer parallels can cost you several thousand dollars and potentially even more.

Prizms Silver is the most common parallel, but there are many other choices that you can opt for. Some examples include Prizms Copper, Prizms Tie Dye, Prizms Gold, Prizms Green, and Prizms Black (1/1). 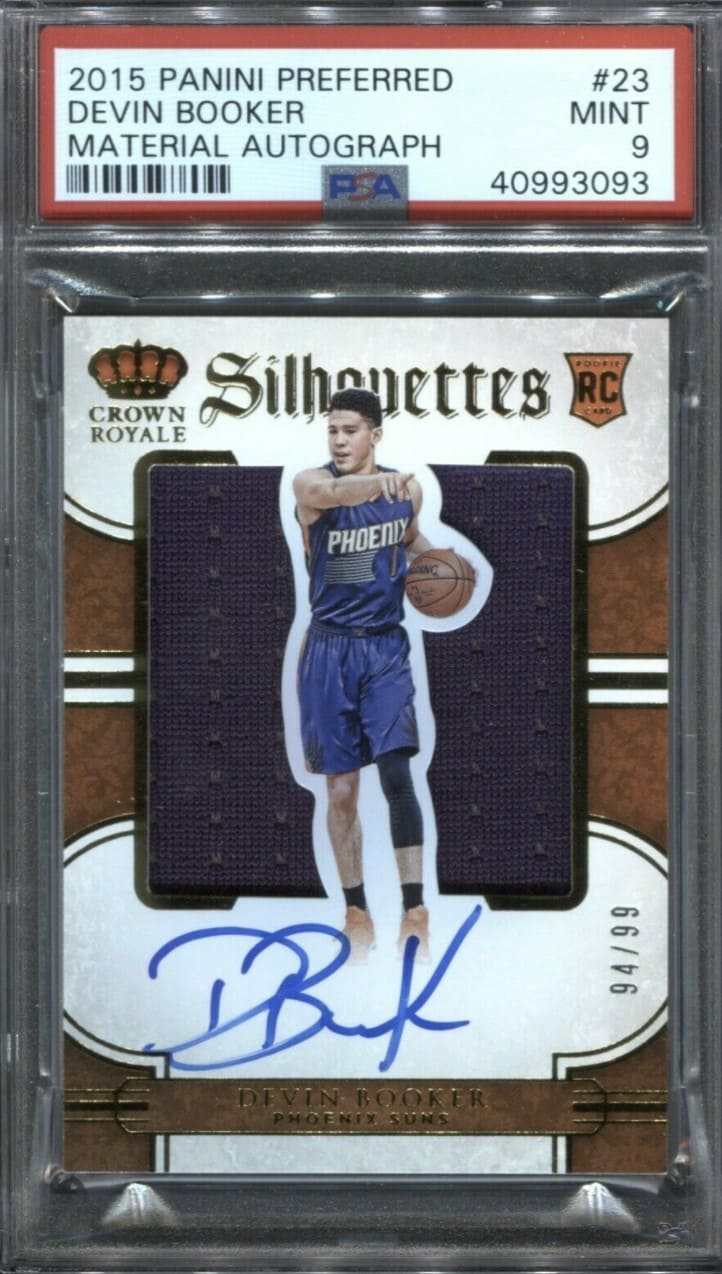 Now, this is where things start to get interesting if you’re after more premium cards.

What you get is an interesting card. You’ll get the autograph, a jersey patch, as well as a limited print run of 99.

All of these features will make you think that the card is going to cost a five-figure sum, but that’s not the case. This card can be bought for less than that, and if you’re lucky, you might be able to get yourself a nice little bargain. 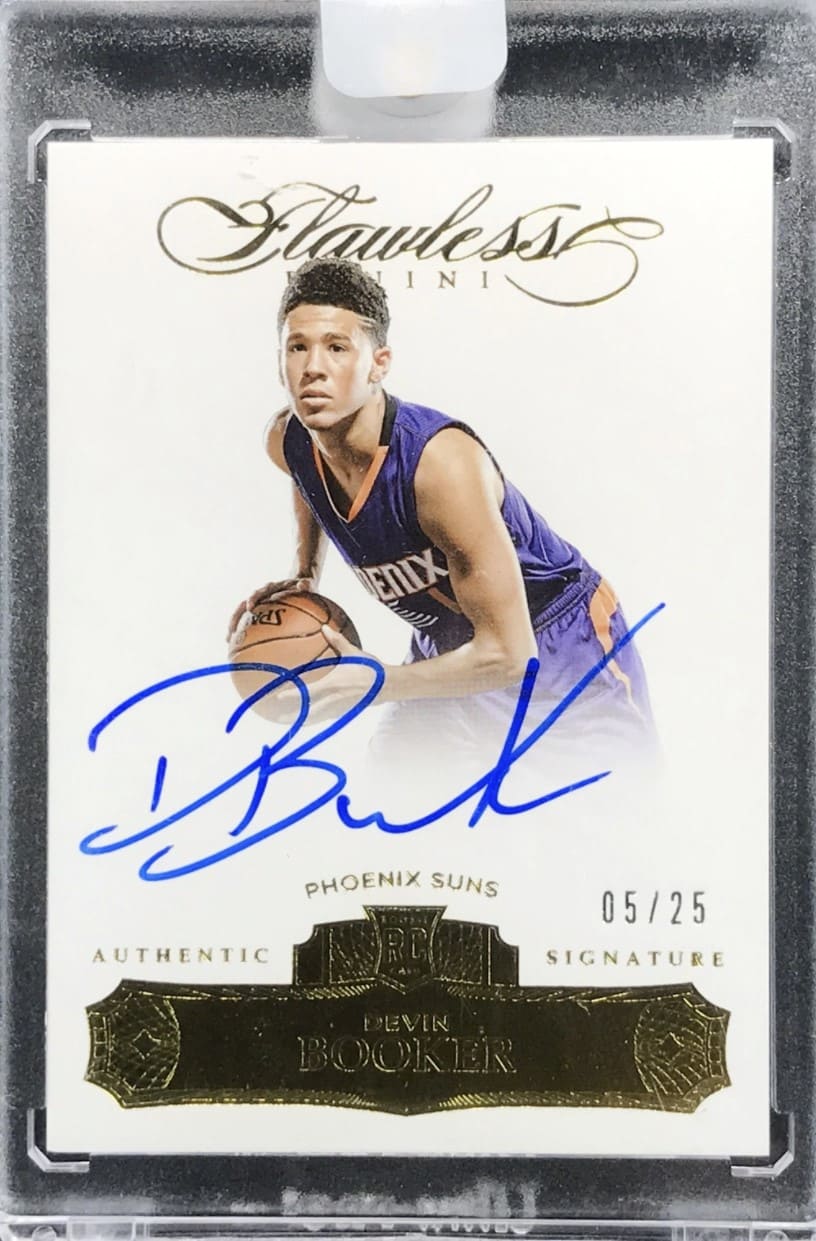 Panini Flawless is a very diverse group of cards of Devin Booker. You’ll be able to find almost any type of card if you decide to go for this brand.

Flawless has always been a premium brand, and with the 2015 line-up, they nailed it. If you want, you can go for the base card, which has 20 copies, or you can go with the various parallels, which tend to be rarer.

No matter which card you choose though, you should be prepared to spend at least a few thousand dollars.

The rarer parallels can sell for five-figure amounts, though. A lot of the card value will also depend on whether the card is graded or not. You’ll find many ungraded options with this card brand.

Find this, and Similar Cards on eBay 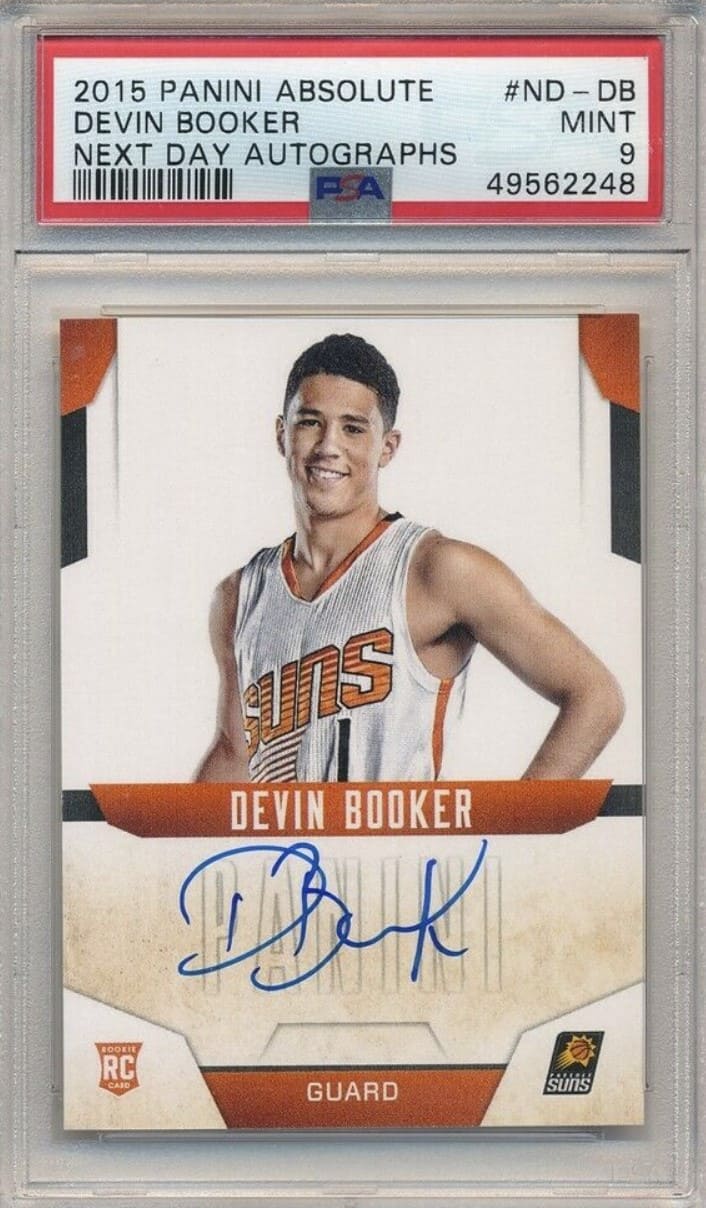 If you like autographed cards, then you’ll love this one.

This is one of the most expensive autographed cards of Devin Booker. The card was signed the next day after the draft, which is where the name of the card comes from – Next Day Autographs.

There is no official print run for this card, but it is thought to be quite a rare one. Despite that, prices for this option tend to be quite high.

For the best-graded options, this card will cost you several thousand dollars. But you’ll also find some ungraded cards. It is not as common as some other cards, so if you want to own this one, be prepared to spend a bit more. 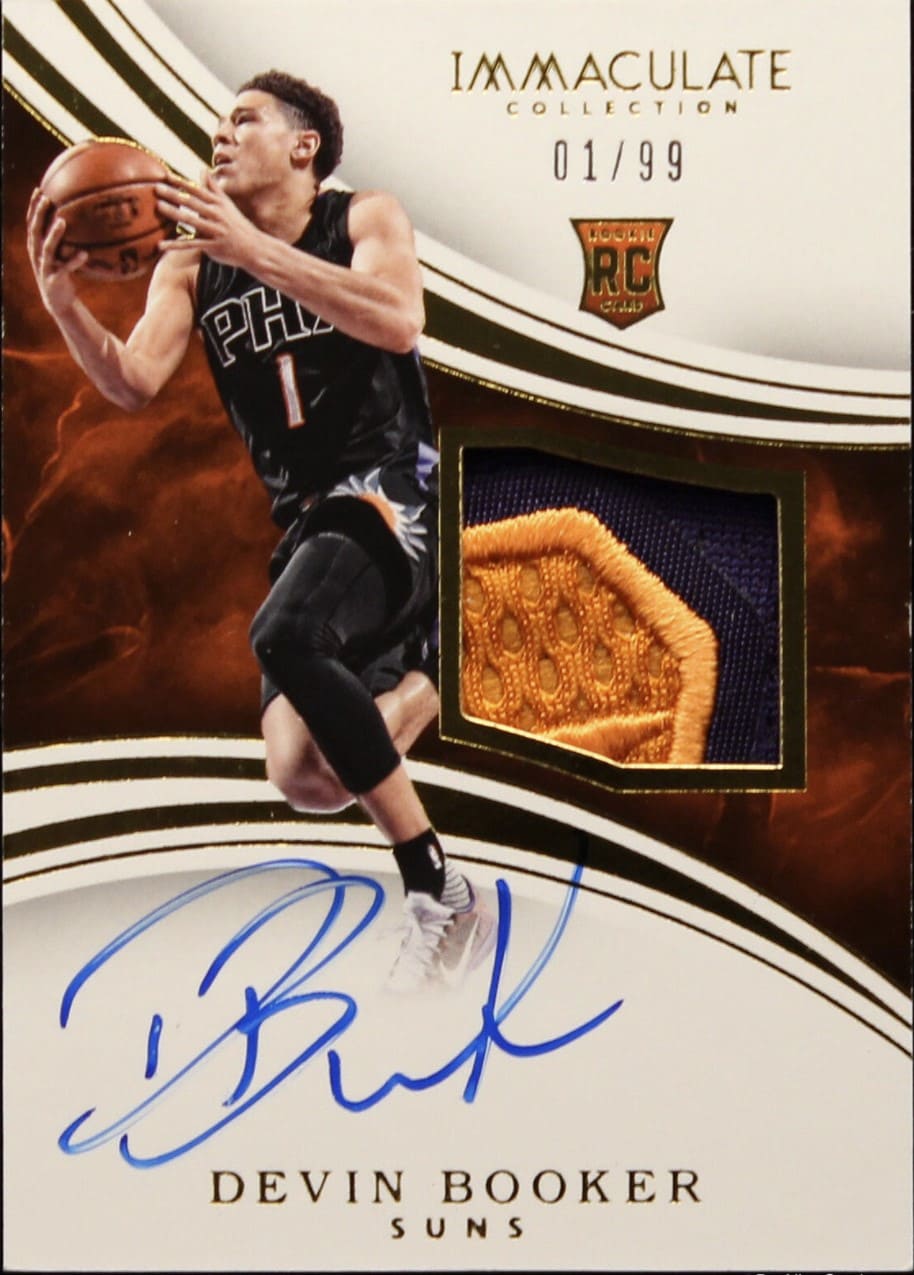 If you’ve been following rookie cards, in particular, basketball rookie cards for a while now, then you’ll probably know that Immaculate cards tend to be some of the most expensive cards on the market.

And it’s no different for Devin Booker cards.

The card is limited to 99 copies, and it has both an autograph and a jersey patch. So it has all the features of a premium card and it comes from Immaculate, which is one of the most famous card companies for basketball.

All this sets this card up to be one of the most expensive rookie cards of Devin Booker.

It’s also a masterpiece to look at. The combination of the autograph, jersey patch, pleasant design, and an action image of Devin Booker makes it a joy to watch.

Just know that this one will be one of the more expensive rookie cards from the 2010s. For the best-graded cards, you’ll have to spend a five-figure amount to get one. 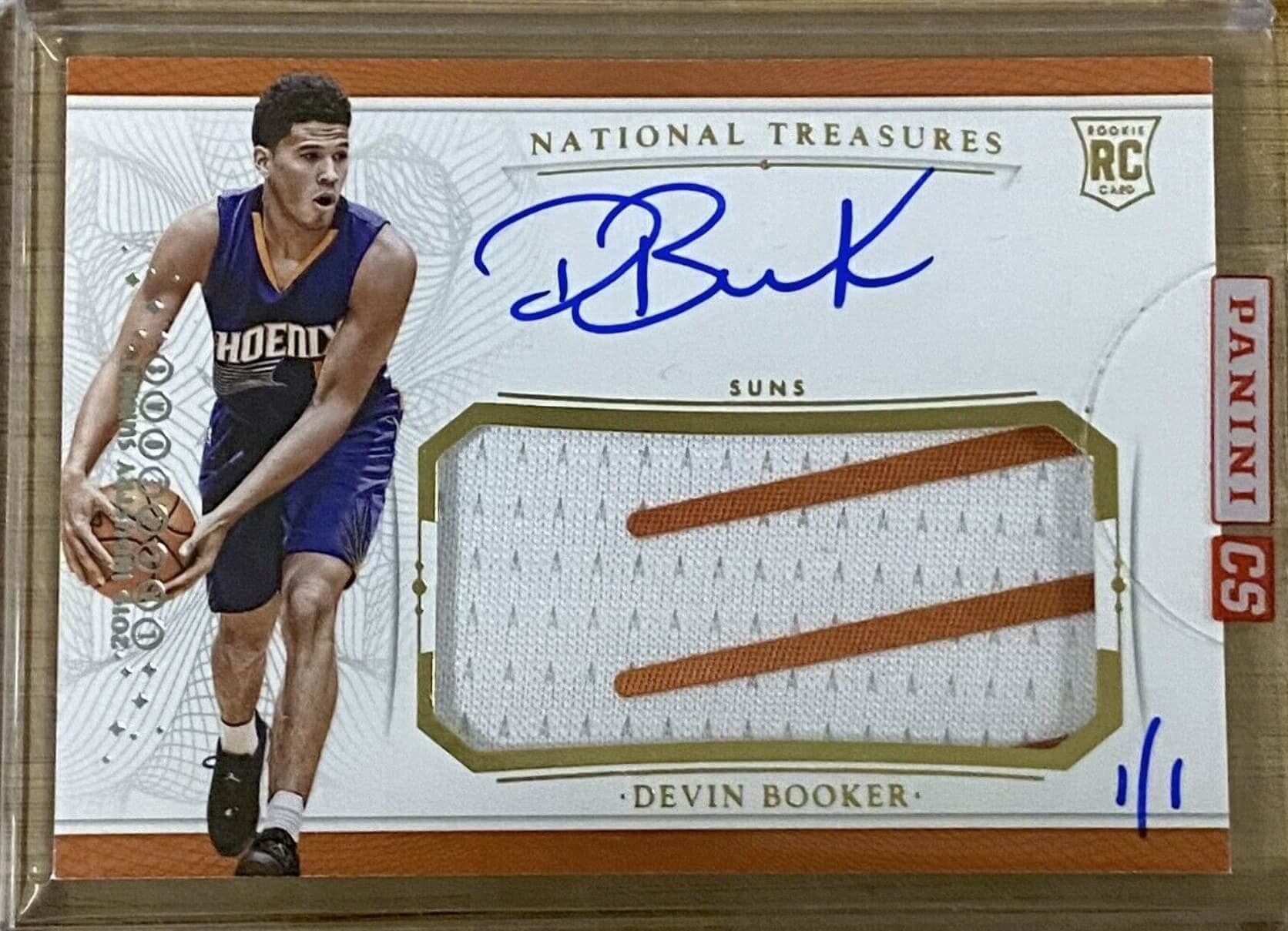 The last card is the king of them all, the National Treasures Devin Booker rookie card.

National Treasures is always near the top when it comes to rookie cards. It is a premium card that will cost you the most money out of all cards on this list. If you want to go all-in on Devin Booker and are prepared to spend a huge sum of money, then you’ll have no regrets with this one.

The card is going to cost you several thousand dollars, especially for the graded cards. Although you will also find many cards that are not graded – in that case, be careful to inspect all aspects of the card.

As always with National Treasures cards, you’ll get an on-card autograph, a limited print run of 99 cards, as well as a jersey patch, making it the complete card to go for if you’re a premium collector.