When Ben Roethlisberger was drafted into the NFL, many people didn’t know how to pronounce his name.

So they decided to simply call him Big Ben.

But after immediately impressing in his first season, he became such a staple of the NFL that those same people simply had to get used to it…

Ben Roethlisberger will go down in history as one of the most legendary quarterbacks and one of the best overall players of the 2000s, not only for the quality he brings, but the longevity and the character that is associated with his name.

Considering his long career and his legendary status, there’s little wonder as to why Ben Roethlisberger rookie cards are so damn popular (especially for Pittsburgh Steelers fans).

So, these are the cards that you should be looking at if you want the best Ben Roethlisberger rookie cards available right now. 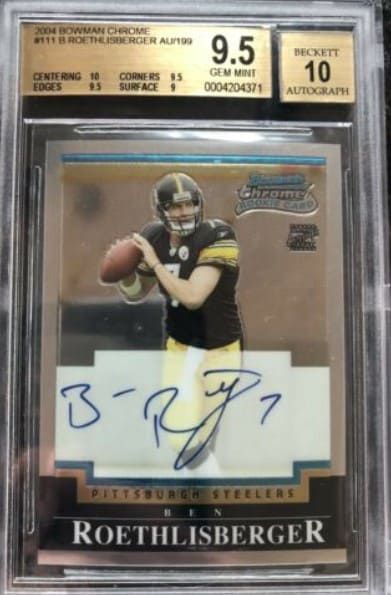 The first card that we have to mention here is the 2004 Bowman Chrome rookie card, simply because it’s one of the most gorgeous rookie cards from that year.

Some people will be distracted by the large white area with the autograph, but overall, this is a fabulous, shiny card that belongs to the very highest tier of Ben Roethlisberger rookie cards.

If you’re not really bothered by that white area, then this might be your choice – just know that it’s one of the more expensive options on the market.

The price is justified by a limited print run of 199 cards, and the premium feel and design of the card. It’s also quite thick and sturdy, which is a decent guarantee that this card has some longevity in it, just like Big Ben. 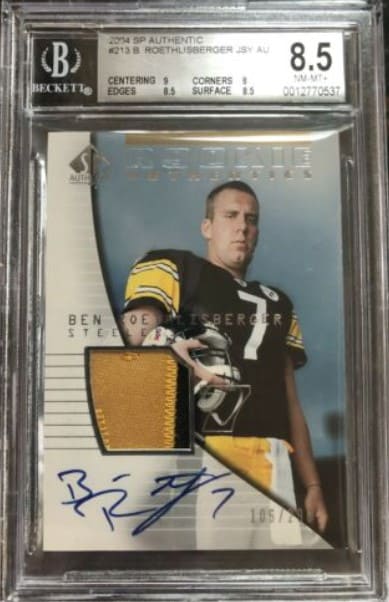 The SP Authentic is one of the most widely known and recommended Ben Roethlisberger rookie cards, and for good reason.

It’s got the autograph on the card, a jersey patch, and scintillating design. This combination of features, paired with the image of dominating Big Ben, and you get a fantastic combo that will appeal to many collectors.

However, one of the main problems with this card is its availability and price. With only 299 copies to its name, this is one of the hardest cards to come by when it comes to Ben Roethlisberger rookie cards.

And you know what limited availability and premium design mean?

That’s right, premium pricing. But the prices are still not as high as they might be for the similar type of design – you’re looking at a few thousand dollars, so if you can find a price that matches your budget, this could be an epic investment for the future. 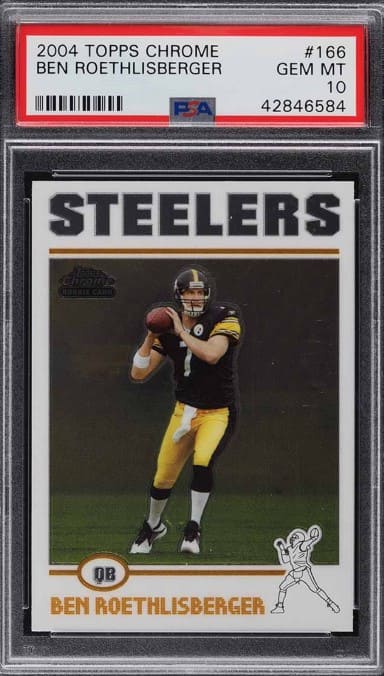 The Topps Chrome rookie card has to be one of the classiest cards from the 2000s. I mean, look at it – just how elegant yet simple it is.

And of course, Topps Chrome has always been at the top of many collectors’ lists when it comes to football cards, especially in the 2000s and even from earlier.

While this card will not be as expensive as the SP Authentic one, it can still command a decent price, especially if found in the gem mint condition. But if you’re on a budget, then you can also consider one of the lower graded cards, just know that they might not be as good for longevity as the top graded cards. 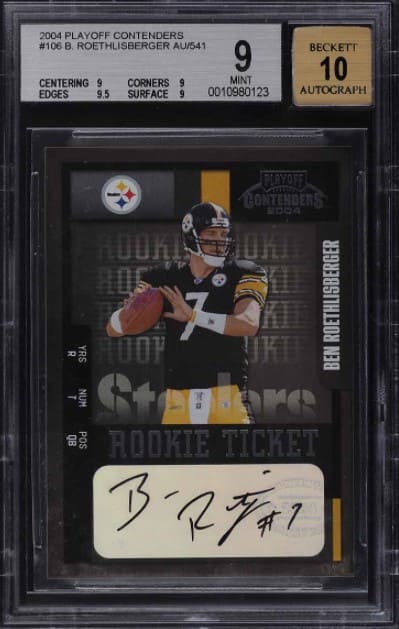 Playoff Contenders is a card brand that you simply cannot forget about when it comes to the best football cards.

One of the main attractions of this card is the on-card autograph – which, even though it is on a sticker, it adds value to the already premium card.

This card is a bit more easily available than the Topps or the SP cards – it has 541 copies, which means that even though it’s a premium-feeling card, it will not be as expensive as those two cards.

The design of the card is so good that you wouldn’t really be able to tell that this card comes from 2004. It is way ahead of its time in terms of looks – meaning that this could be an evergreen card to invest into, which bodes really well for the future of this card. 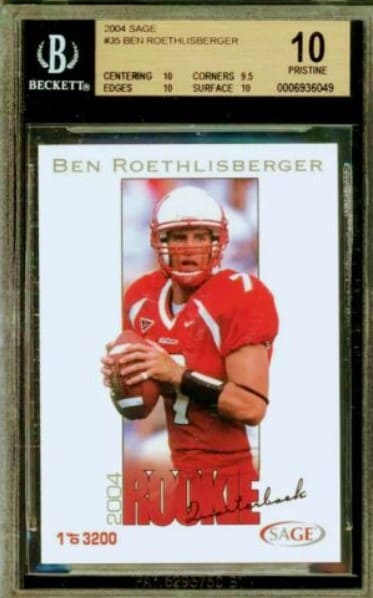 Now, Sage cards don’t often get included in rookie card checklists, but this one is one of the better sets from this card company.

It is just sleek and elegant with its white border and the action shot of Big Ben in the middle. I also love the fact that it displays the number of the card you’re having, like the serial numbers you can see on some other premium cards.

It will not be as expensive as the previous premium cards we’ve mentioned. But, in its highest conditions, this card might be able to pull several thousand dollars, while lower graded cards are not as expensive.

This is one of the most underrated Ben Roethlisberger rookie cards that you can consider, and it can be surprisingly valuable if you can find one in the best conditions. 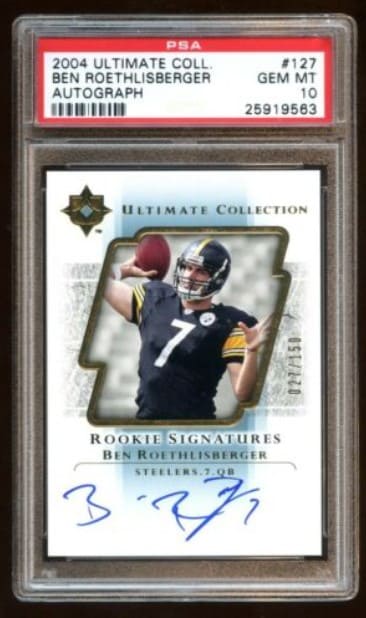 At first glance, the Ultimate Collection Rookie Signatures card has everything a premium card needs: the autograph on the card, limited print run, and amazing design. Just a shame there’s no jersey patch on this card.

Nevertheless, this is one of the more valuable rookie cards of this quarterback and if you’re a premium card collector, this might be one of your top options to choose from.

Just know that this card can get quite expensive. The highest graded cards like this one will cost several thousand if not more, making it one of the most expensive cards to collect of Ben Roethlisberger on the whole.

If you’re a budget collector, you might want to consider other alternatives (which we’ll go through below). 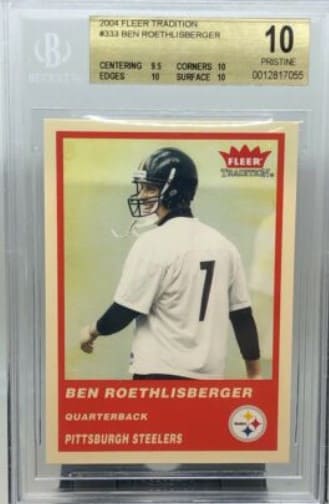 The 2004 Fleer Tradition card is low-key one of the most understated and beautiful Ben Roethlisberger rookie cards out there.

It has a very muted design which makes it feel as though it’s already several decades old, which is the preferred style for many card collectors.

Yes, the image quality on this card is not the best, as you’ll be looking into the player’s back and you won’t be able to see his face, but it’s the design where this card really shines. The red-white border and the elegant typeface on the bottom of the card are beautiful.

Top rated cards of this type can be quite expensive, though.

While gem mints are hard to come by, they will command relatively high prices of several thousand dollars – if not more. So if you’re not prepared to spend that type of money on this card, then you might want to consider some lower graded cards if you can find them. 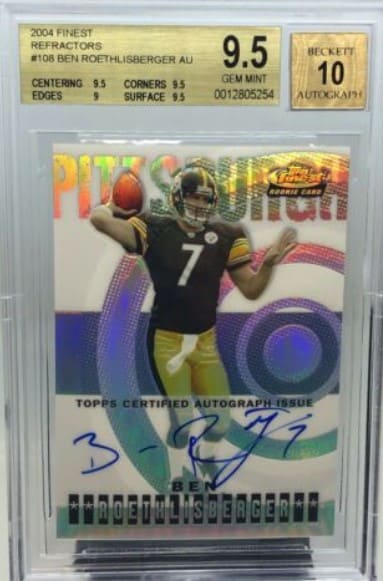 Topps Finest is one of the most popular cards for collectors of Big Ben rookie cards. It is known for its slightly more flashy yet premium design, especially the refractor (as seen in the image).

The base card of these Topps Finest cards is significantly less expensive than the refractor, though. That’s because it’s more widely available with 399 copies to its name, but you will get a slightly less shiny, black-and-white design, which still works well with this card. 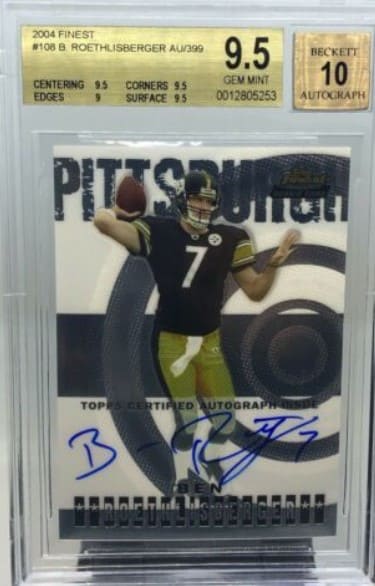 The refractor, on the other hand, is much rarer and tougher to find. It has only 199 copies, which means the price is going to go up for that factor alone. But it’s also more colorful and it feels a bit more premium compared to the base card.

No matter which variation you prefer, both of them still have the on-card autograph and are quite similar, with the base version being a little bit cheaper and perhaps a bit muted with its design as compared to the refractor. 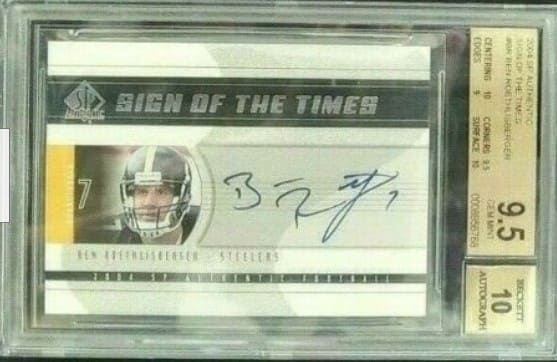 This card made by SP Authentic is one of the hardest cards to find out there. It has that typical “Sign of the Times” logo on the card, as well as the autograph.

One of the main distinguishing factors of this card is its form, as it is laid out horizontally instead of vertically.

This card is yet another option if you have the money to spend. In its highest grades, it will cost several thousand. But it’s not among the most expensive premium cards from 2004, as it will fall just short of some cards we’ve taken a look at above. 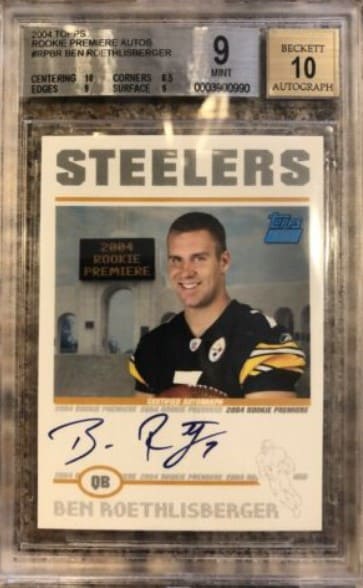 The Topps Premiere card is one of the rarest Ben Roethlisberger rookie cards out there.

It has a very low population and it’s known for having a relatively similar design to the Topps Chrome card, but with some changes.

The most obvious change is the addition of the 2004 Rookie Premiere logo seen on the image behind Ben, and the image itself is also different. You’re also getting an autograph with this card and a nice design.

But because it is quite rare, the prices for this card might be a bit too high if you’re not prepared to spend big bucks. 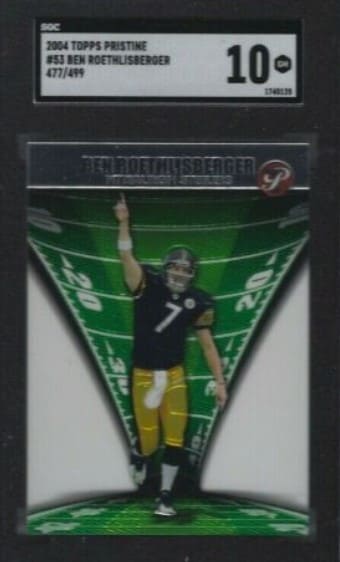 Let’s move on to something a little bit more affordable, and we’ve got the Topps Pristine rookie card.

This card has 499 copies made and it was initially quite highly rated among card collectors. However, with the arrival of the many premium looking cards later on, this card’s value was smashed and significantly lowered.

Today, it can be seen as one of the better budget options for those who don’t have the budget to spend to get the premium cards. It has a very distinct design with the green field in the background and quite a minimal design, too. 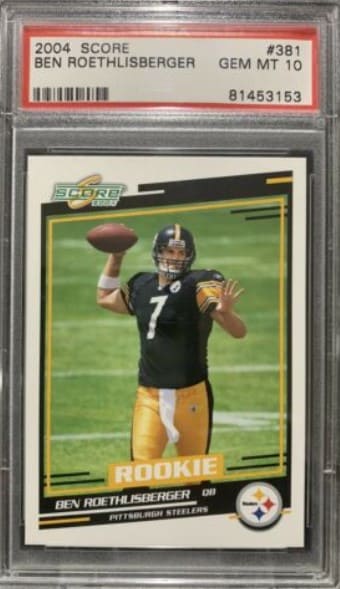 Score cards have a good tradition for delivering quality for relatively low prices, and this card is no different.

With relatively low prices, this card certainly belongs to the budget category we’ve talked about before. The design of this card has Ben with the ball in his hands, which is certainly a nice action image and one of the better ones when it comes to budget cards.

However, the overall design might be a bit of a marmite – some people will like it, while others won’t.

But if you’re not really bothered by it and you’re not willing to spend thousands on a card just yet, this card can be an excellent addition to your collection and potentially, a good investment for the future, too. 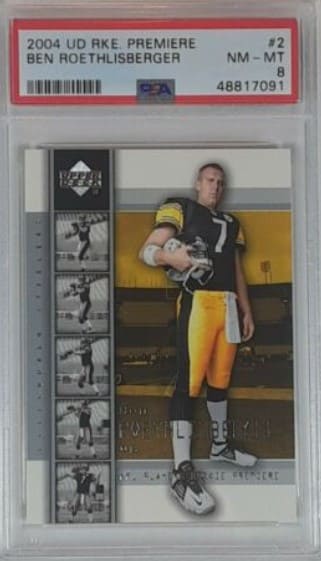 Upper Deck is one of the most affordable cards to collect, especially this Rookie Premiere variant that came out in 2004.

Ben’s card was placed in the #2 position, which just goes to show that the hype for this player was quite big at the time he was drafted.

You can consider this card to be one of the best budget cards that you’ll find, as it will certainly not cost that much. The higher graded cards will be a bit more expensive, but they will not get into the range of some other cards we’ve seen.

So there you have it, these are the top Ben Roethlisberger rookie cards to choose from.

There are many options that you can consider, both budget and premium – and many in between the two categories.

Which one makes you excited the most?