Barry Sanders is a familiar face for most football card collectors. He’s known as one of the best running backs in his time, winning the 1997 MVP award.

He was drafted in 1989, but his popularity continued throughout the 1990s. Today, he’s remembered by many with a touch of 90s nostalgia.

These are the Barry Sanders rookie cards that you should know about. 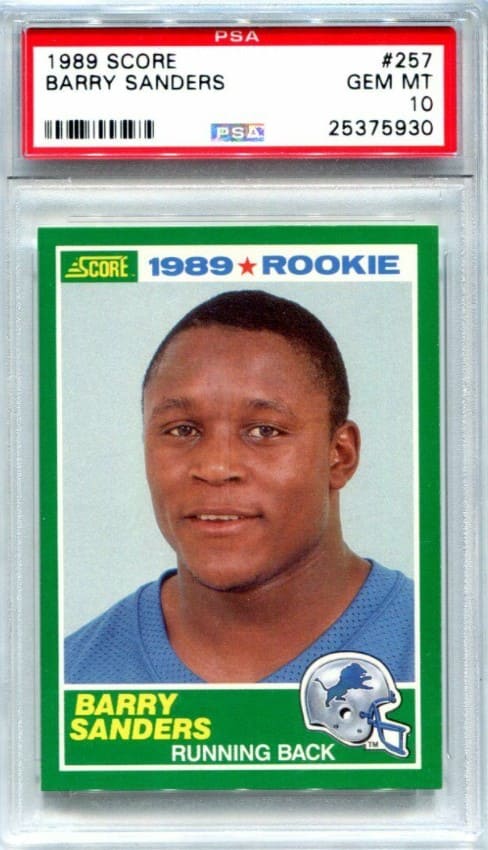 Let’s start with one of the most obvious choices when it comes to rookie cards, the Score card. If you decide to go for this card, you can’t go wrong – however, know that the highest graded cards can be quite expensive.

Another issue that comes up often is that there are many listings of non-graded cards, which is not great.

For older cards like this one, you’d ideally want to buy a graded card, which will at least let you know that the card is pristine and in good condition.

This is arguably the most popular rookie card of Barry Sanders for various reasons.

The first major reason is that it was released by Score which at the time, was the most popular and most reputable brand for football cards.

Secondly, it’s also the only mainstream rookie card with a portrait of Sanders – most other cards have him in a different pose, mostly in action. This is what made this card so popular for those who wanted a portrait-style card.

So if you have one of these sitting in your uncle’s garage, then you can consider yourself lucky… and you’ll be laughing especially if the card is well preserved and if it gets a good rating by a rating company.

Let’s also mention that there are autographed versions of this card, just not officially released. These were perhaps signed later on by Sanders himself, although it’s not the official version. 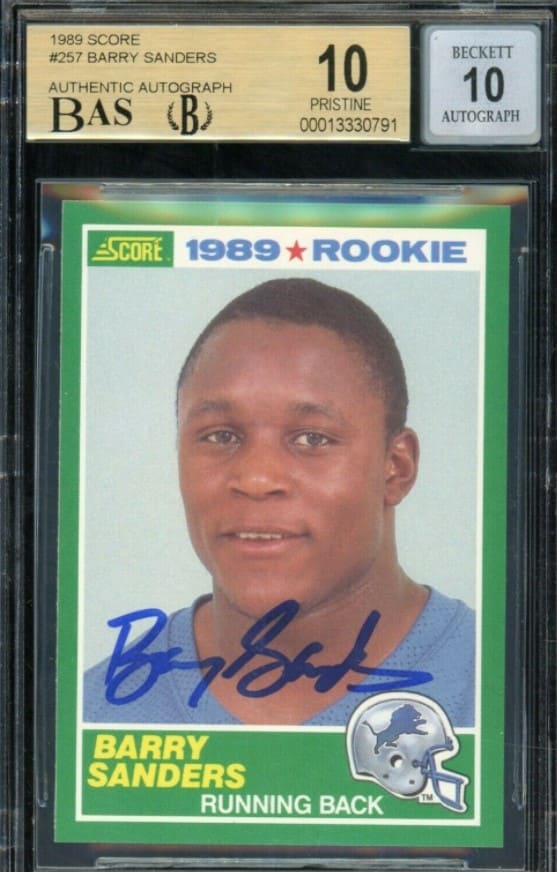 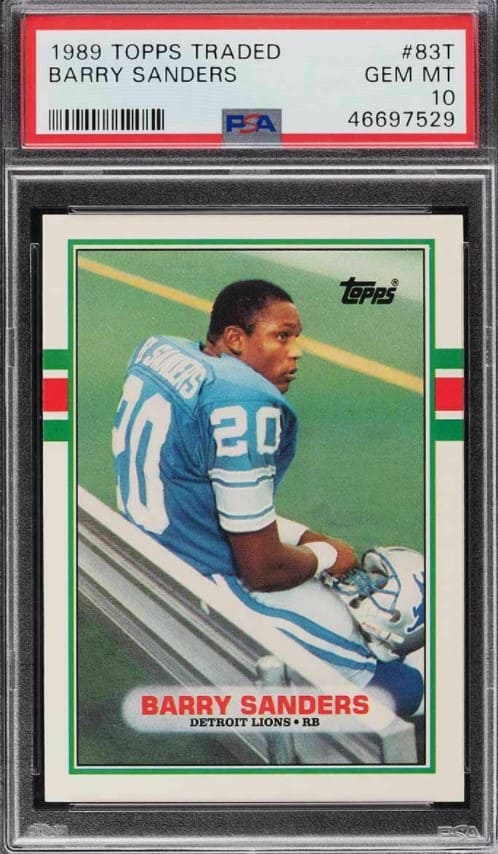 Topps went for that typical border design that was famous for Topps cards, just with a green border. In this case, the card is quite similar to the Score card, although there are some major differences between the two.

The most obvious one is the image. Here, you have Barry Sanders waiting for his chance on the bench in his full kit.

It’s surely a matter of personal taste, but the colorful image makes this card one of the most desired Sanders cards and perhaps the best looking one, at least for many collectors out there.

Now, Topps, along with Score, was the most reputable football card brand, so this beauty naturally got a lot of attention early on from collectors.

However, this card isn’t Sanders’ most valuable rookie card. The Score one beats this one just narrowly, primarily because this was a part of the update set. Topps didn’t manage to include Sanders in the base 1989 set which is a bit of a shame, but at least we got to see the Topps Traded Sanders card from that year from an updated set.

If you can’t get the Score 1989 Barry Sanders rookie card, then this one is your next best bet. 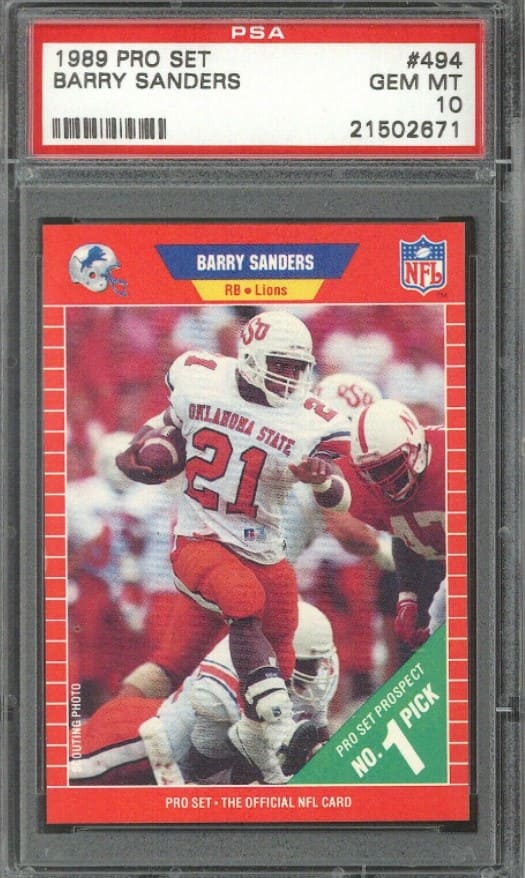 If retro is what you’re after, then the Pro Set Barry Sanders rookie card represents a great option for you.

However, if you want something that doesn’t look out of date and might last for a few more years, then it might not be your best option. At the same time, it’s also the cheapest option out of the three mainstream cards, so make your pick.

It does have something different than the other two cards.

First off, there’s the red border and background which in itself provides something different from the other two options. Then there’s also a different jersey Sanders is wearing – in this case, red.

And another feature that might appeal to you is the high-octane shot on the card, which adds a bit of action to the proceedings.

Now, this is not the most valuable Barry Sanders card by any means, which means that you might be able to get it for a relatively cheap price. But this also means that you’re compromising on the resell value if you’re looking for that just a tad, so you might want to find a balance here. 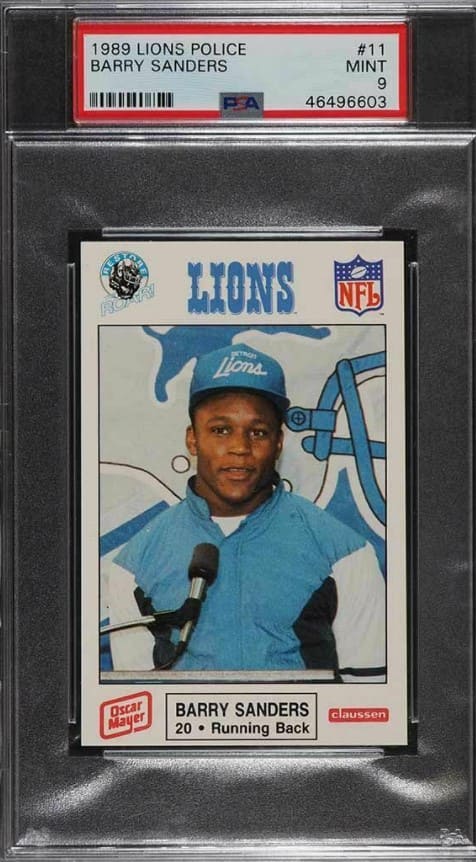 However, because it doesn’t have the same reputation as the other brands, this card is simply not of the same ilk as the other cards we’ve mentioned so far. This one might be a good collector’s item, but certainly not a card that you would look to buy or sell for profit somewhere along the line.

Of course, the best-graded cards can still reach values of several hundred dollars and potentially more, but that’s the highest limit of these cards. The ceiling is far lower as compared to other rookie cards like Score or Topps Traded.

But if you’re after something a bit different and unique, then this could be a decent option to add to your collection, especially if you’re a Barry Sanders fan.

With this police card, we’ve unfortunately exhausted all the main options when it comes to rookie cards.

However, there are still some interesting cards that came out later on, so it might be worth taking a quick look at what they are and if they are right for you. 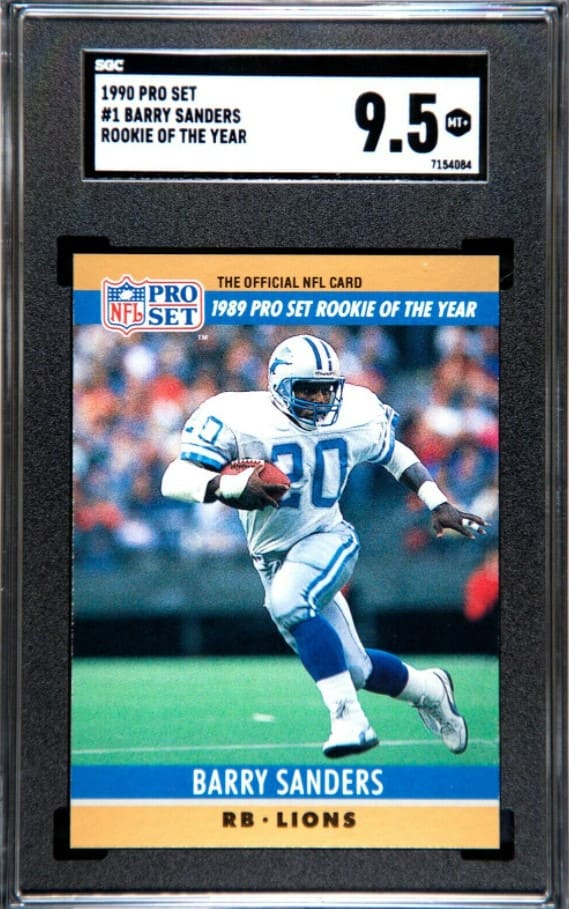 Barry Sanders had a storming first season offensively, earning him a title of Offensive Rookie of the Year for 1989. And this card reflects that award that Sanders won convincingly.

This thing is as close as you’ll get to a rookie card, even though it’s not his true rookie. It came out in 1990 as a part of the Pro Set, and it was the first card to be included in that set, which speaks volumes about the hype of Sanders’ abilities at the time.

Now, Pro Set cards generally have a reputation of low values and high print runs, and the same can be said about this one.

The good thing about that is that these cards are still widely available nowadays. On the flip side, the values tend to be quite low, so if you happen to own one of these, you will only sell it for a decent price if it is graded well.

It’s still a good option for you if you love Barry Sanders and if you’re looking to add something interesting to your collection. 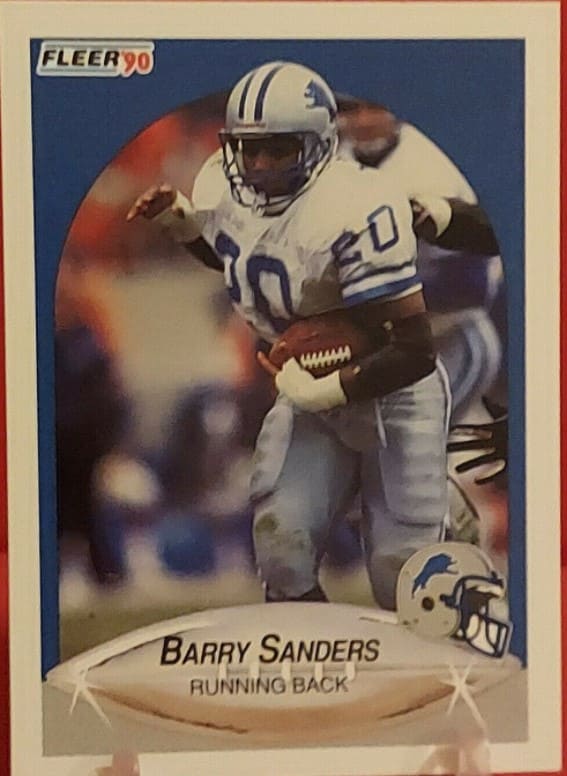 Fleer was a bit late in releasing the Barry Sanders rookie card, which came only in 1990.

This brought some disappointment to Fleer rookie card collectors, but at least they were able to get their Barry Sanders rookie card a year later. Better late than never…

Even though it came out in 1990, some collectors see this card as a rookie card, while others argue it’s not a true rookie card. That’s especially the case since there were many earlier iterations of Barry Sanders rookie cards that we’ve seen above.

There’s also nothing special about this card specifically other than the fact that it was released by Fleer. The print run was also quite high, which means that the prices for these cards can be quite low nowadays, so you might be able to get yourself a sweet deal.

One of the main problems, however, is that there are not many graded cards of this type currently out there, so you might have to be a bit careful when picking an ungraded card, as you might get a bit of a bad deal. 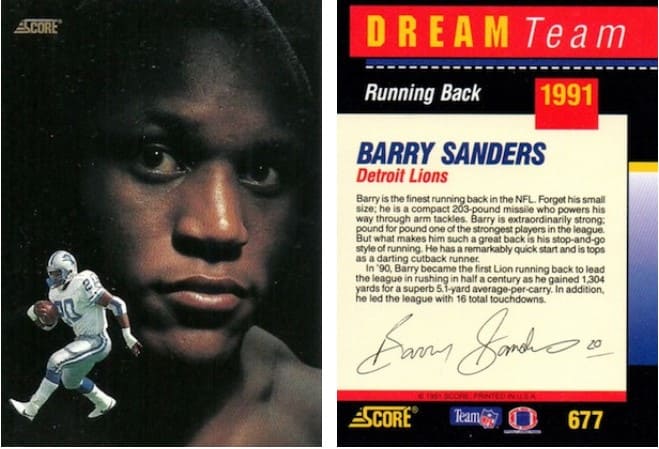 Autographed cards were a true rarity back in the 1990s, which meant that these cards carried higher values than usual cards. Today we have hundreds of refractors and parallels for almost every card brand, but back then, autographs were the best type of unique feature that you’d get.

And the 1991 Score Dream Team cards were one of the first Barry Sanders cards to be released officially with an autograph.

The problem is that these are a rare find nowadays, and you might have a slight difficulty finding one in the marketplace.

However, if you happen to own one of these somewhere in your garage, then you should know that you hold something that could be special, especially if you decide to get your card graded, which could increase the value. 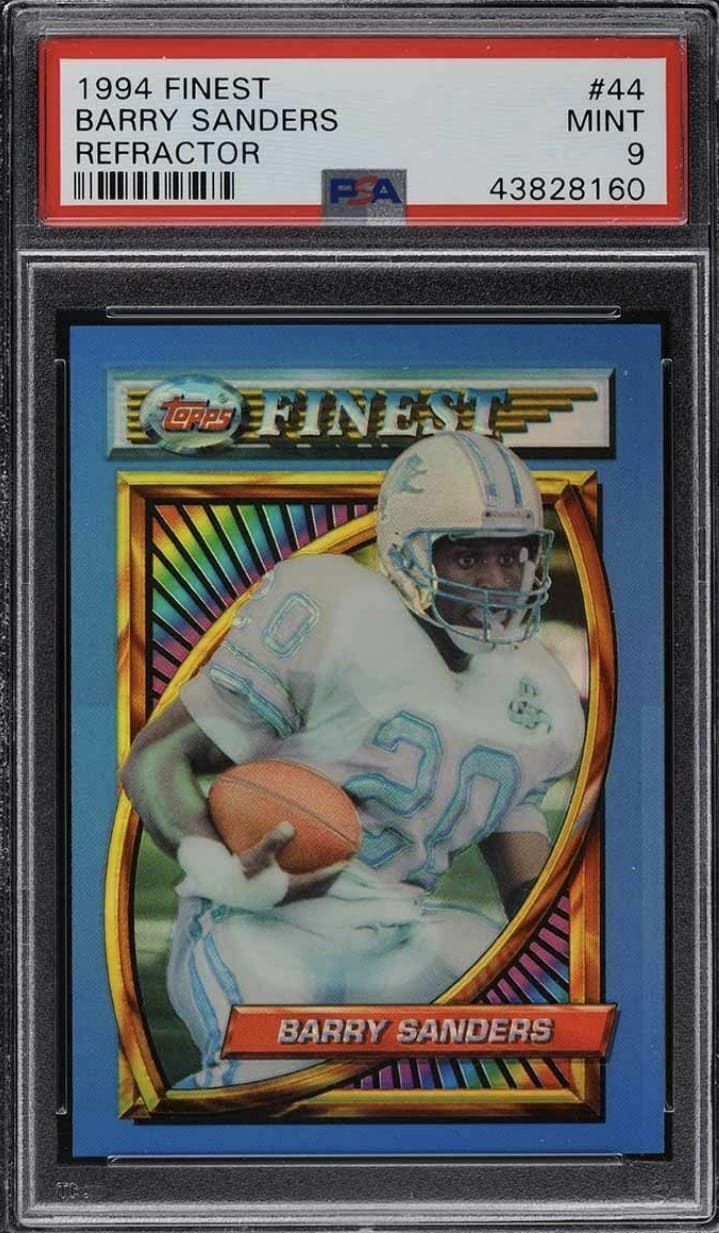 If you’re looking for a refractor or something a bit shinier, then you will have to accept the fact that you won’t find a rookie card like that.

Instead, you’ll need to fast forward to 1994 with this Finest card and its refractor. Overall, this is one of the more expensive Barry Sanders cards from the 1990s.

You’ll see that it has that typical shiny look that you’d come to expect from refractor cards like this. This would be a great addition to your collection provided that you’re ready to spend a bit more, and you prefer colorful variants like this. 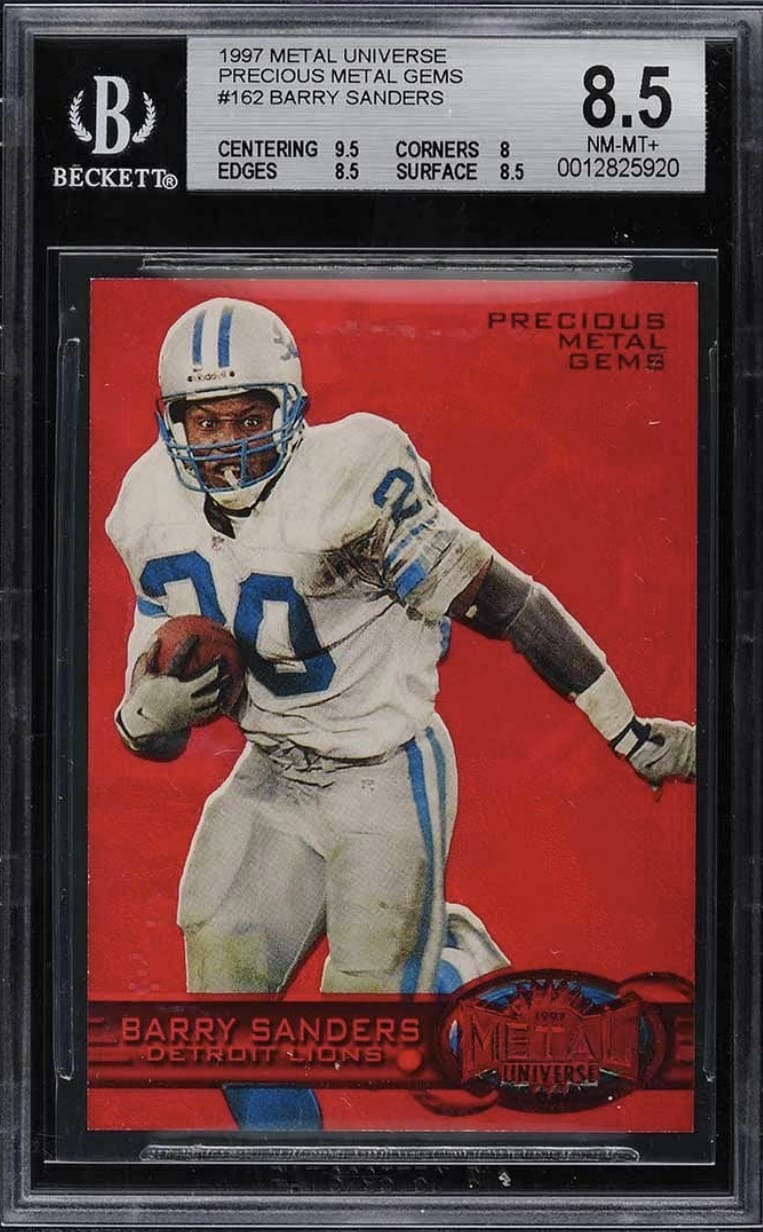 This precious metal gems card by Metal Universe is one of the most expensive Barry Sanders cards of all time. If you happen to own this one nowadays, you might be able to sell it for a five-figure sum.

You’ll see that the print run for these Metal Universe cards was quite short; for the red variety seen here, there were only 135 copies to its name. The green version was also quite rare, although it had 150 copies.

This card captures the 90s nicely when foil cards like this one were all the craze. It was considered a premium card back then, and it still holds that status nowadays. 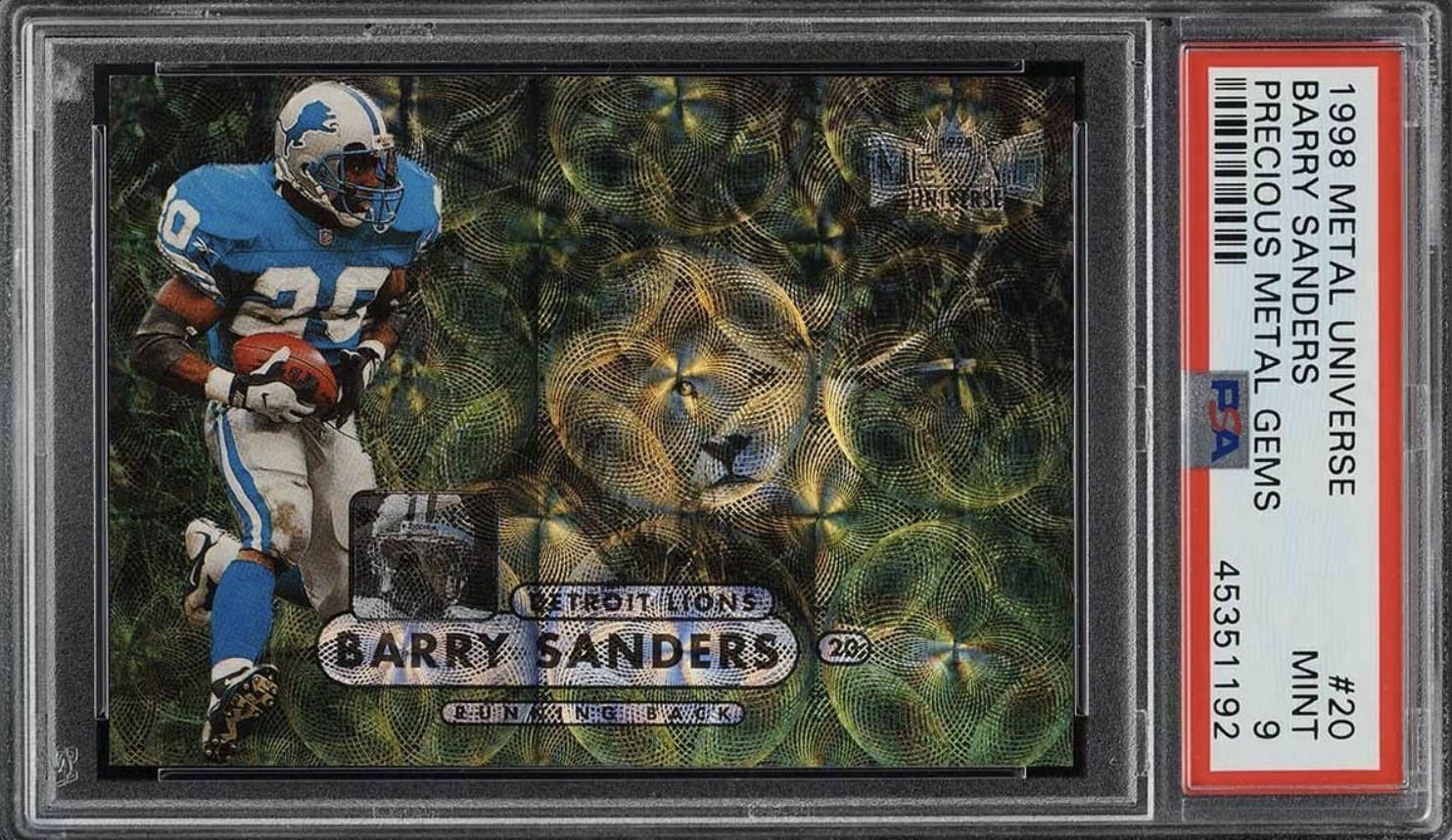 The trend of Metal Universe cards for Barry Sanders continued in 1998 when this gem was released.

You can see that it has a lion in the background, which makes it a bit unique. Of course, it’s also typical that these cards had a relatively short print run, so you might struggle to find this card for a sensible price.

These still remain hugely popular though and will sell for handsome values of anything above the five-figure mark. 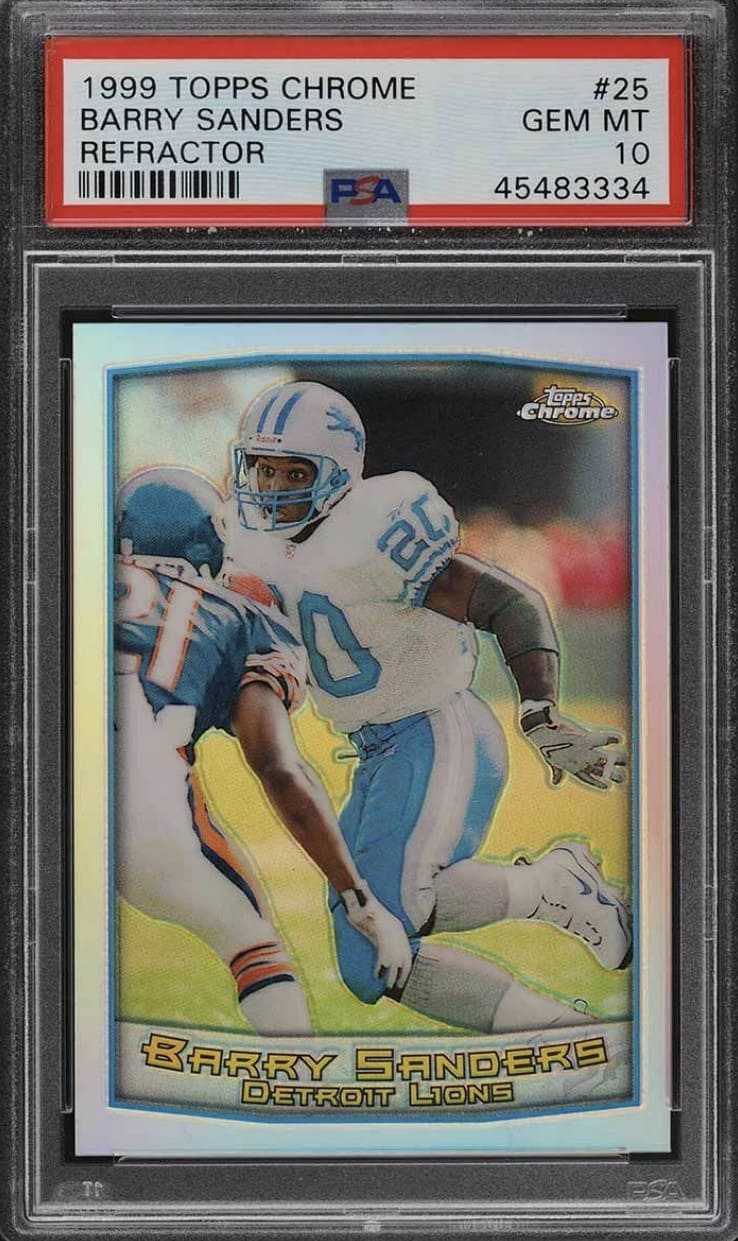 This Topps Chrome card captures Barry Sanders in all his glory. These were the years where Barry Sanders was finishing his career with the Detroit Lions, and he remained a force to the last day of his career.

Of course, Topps Chrome cards always carry a great deal of popularity with them, and pair that with the fact that this is a Refractor variety, and you get a powerful combination.

Just know that this combo can be pretty expensive, too. 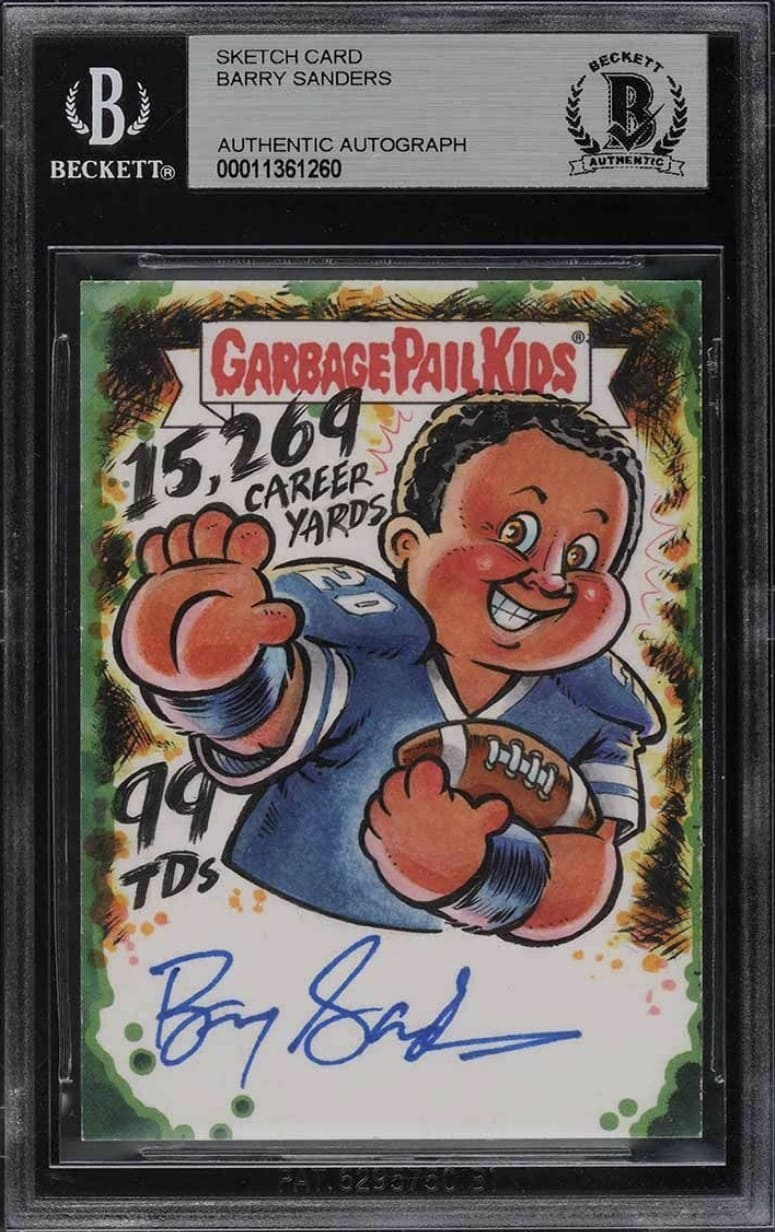 For the last card, we wanted to show you something a little bit different here.

This card is a Garbage Pail Kids card, which is a hugely popular card line that stems from the 1980s. With this release, GPK tried to capture some of the biggest sporting stars in history, and this one has Barry Sanders depicted on the card.

It makes for a neat combination of a popular card brand and a popular sportsman, which is why there’s no surprise that this card is so hugely desired.