1966 Topps baseball set was the last card set to include Sandy Koufax’s card. This is the main reason why this set will be remembered, but it also included cards from some of the greats like Mickey Mantle.

In addition to that, you’ll also find some great rookie cards in this set. Don Sutton, Jim Palmer, and Fergie Jenkins were all memorable additions to the set, especially considering the fact that they are all Hall of Famers.

Compared to the last few years, the set that came out in 1966 provided a more standardized approach. Gone is the colorful design from 1965 and the set returned to a more structured look.

If you’re looking for the best 1966 Topps baseball cards or just want to know more about the set, then read on. Topps continued a similar formula they used up until this year, with a few minor changes, of course. The most notable change is in the design of the card, which is a bit more structured and less graphically intense than the previous year.

The front of the card featured the portraits of players – some were depicted in an action shot, while others were featured in a posed image.

The colors of the cards also differed. Some cards had yellow or white print, others had red or black print. The backgrounds under the print were also changing – the most common colors were violet, blue, orange, gray, yellow, and red.

In terms of set size, Topps continued to increase the number of cards included in the set.

In 1966, the Topps baseball set included 598 cards, which is the same size as the set from 1965, although slightly larger than sets from previous years.

As with the previous sets, we also saw some interesting subsets inside the 1966 Topps set. The most popular subsets in this set were League Leaders, Rookie All-Stars, and Veteran All-Stars.

So now that you have a bit more information about the set itself, let’s talk more about the best cards that you’ll find inside this popular retro set. Drafted by the Baltimore Orioles in 1965, Jim Palmer’s first appearance in a Topps set came in 1966. Palmer was a rotational option for the season competing with the likes of Frankie Robinson, which means that his position as a starting pitcher came much later.

The Orioles managed to win the World Championship title in the 1966 season, which just goes to show the quality of the team.

Palmer was one of the rising stars of that team, featuring in the season as a rotation option. However, Palmer’s best part of his career came from 1970 onwards when he was first included in the All-Star team.

Palmer’s rookie card still gets a lot of attention from collectors due to the fact that he’s today a Hall of Famer. This card will cost you thousands of dollars in the best conditions. The second rookie card that’s worthy of a mention on this list is Don Sutton’s rookie card. While not as valuable as Palmer’s rookie card, it’s still an important card from the 1996 Topps set.

Sutton is a Hall of Famer and will be remembered as a great pitcher in baseball history. He was drafted in 1966 by the LA Dodgers and went on to play for a number of teams, including the Astros, Brewers, Athletics, Angels, and then the Dodgers again.

But perhaps more notably, Sutton is a Hall of Famer which is why his rookie card will always be popular. The only minor “hindrance” of this card is that Sutton shares the card with Bill Singer. 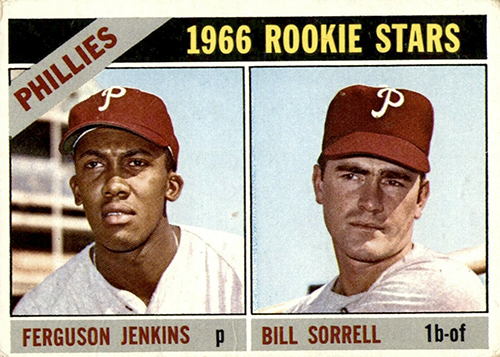 The next notable rookie card is the Fergie Jenkins rookie card numbered #254. Again, Jenkins is a Hall of Fame inductee, which is the main reason why this card is worth mentioning here.

Jenkins was drafted by the Phillies but spent just a season with this team before moving on to the Cubs where most of his on-the-field successes came.

He received the Cy Young award in 1971 while playing for the Cubs, and is today a Hall of Famer, which means that this card has the potential to sell for thousands of bucks. 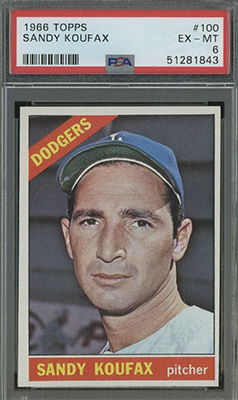 Known as the last card ever of Sandy Koufax, the #100 card from the 1966 Topps set is particularly notable.

Sandy Koufax’s 11-year career with the Dodgers came to an end in 1966 due to arthritis in his left elbow. If not for this injury, Koufax would have undoubtedly gone on to achieve much more than he did.

But despite the injury, Koufax is today considered one of the best ever pitchers in baseball.

Koufax’s 1966 Topps card is remembered as his last card ever, so collectors had the last chance to see him included in a card set, which means many people still look at this card as one of the best cards from the 1960s. 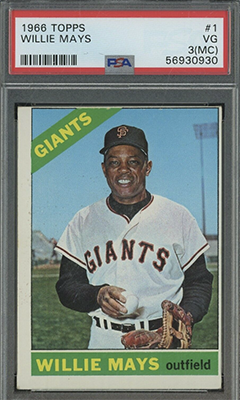 Topps knew very well that Willie Mays’ card from 1966 was always going to be one of the most popular cards from the set, so they decided to place it as the number 1 card in the set.

If you follow baseball for some time or have at least some knowledge about the history of baseball, then Willie Mays should need no introduction. Today, he’s considered one of the greatest ever players to grace the MLB.

Here are some other notable cards from the 1966 Topps set that you can consider: